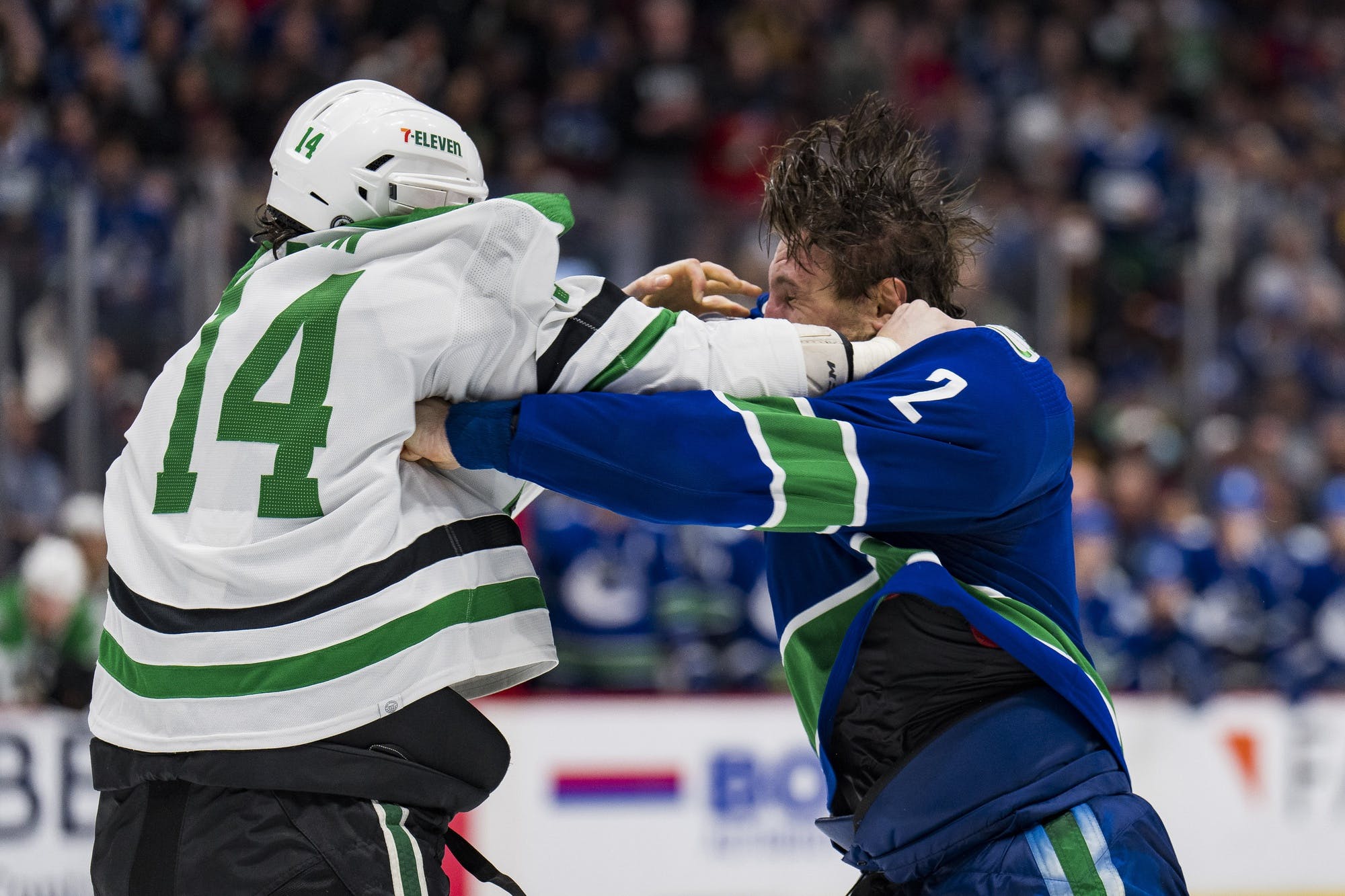 By Stephan Roget
4 months ago
Of all the major sports, hockey is probably the one least built upon one-on-one competition. Shootouts aside, the game of puck-and-stick only ever briefly breaks down into a 1v1 situation, and only rarely do those situations have truly long-term consequences.
But Training Camp is an exception to that rule.
At the outset of every season, across 32 NHL franchises, jobs are on the line. Roles are won and lost. And while teams love to crow about wide-open competition, every job eventually and inevitably comes down to two finalists. That’s when 1v1 contests become truly consequential — and these ones are between would-be teammates, no less.
Sometimes, these depth-chart-duels develop over the course of a hard-fought camp. Other times, the stakes are fairly obvious from the get-go, and players get the benefit of coming into Training Camp knowing who they’re really up against.
Below, we’ll examine three 1v1 roster battles that seem guaranteed to erupt as Vancouver Canucks Training Camp 2022 kicks off, each of which can be considered high-stakes for the players involved — and high-drama for the fans watching and waiting for opening night.
Disclaimer: We realize that nothing is ever quite so black-and-white in hockey, and that we may be oversimplifying a little in narrowing these battles down. We are also aware that a lot can happen to the roster between now and opening night; including injuries, trades, PTOs, and perhaps a waiver pickup or two from what promises to be a bumper crop. For the purposes of this article, we’re assuming that the Canucks skate into the 2022/23 season more-or-less as is.

Yep, we’re going for the emotional jugular right away.
There are a lot of similarities to be found between Vasily Podkolzin and Nils Höglander. Born within six months of one another and bookending the Y2K Panic, both players were drafted in the 2019 NHL Entry Draft and each found success as a rookie with the Canucks.
Both are capable of playing either wing, and each is signed to a sub-$1 million contract (with performance bonuses).
But Höglander made his debut a year earlier, which means that he’s already gone through the dreaded sophomore slump. And that leaves him playing catchup in what promises to be some fairly direct Training Camp competition between Vancouver’s two young forward talents.
The Canucks’ forward corps is simply overstuffed, and there’s not enough room in the top-nine for everyone who deserves to be there. One can safely consider Elias Pettersson, JT Miller, Bo Horvat, Brock Boeser, and Conor Garland as established locks. The incoming Ilya Mikheyev is all but guaranteed a top-nine spot, too, and the same can probably be said for Andrey Kuzmenko, who will be given every chance to succeed.
Then there’s Tanner Pearson who — while he may not be quite as shiny and exciting as some other options — is far too reliable to not be given ample responsibility and ice-time. If healthy and untraded, expect Pearson to be slotted into the top-nine far more often than not.
For those of you not keeping score at home, that’s eight players already. That leaves one spot left in the opening night top-nine for one of Podkolzin and Höglander — and fourth line duties for the other.
As of right now, this might seem like a one-horse race. While Podkolzin only got more impressive as his rookie season wore on, Höglander struggled to maintain his spot in the lineup as a second-year player, and he clearly didn’t connect well with coach Bruce Boudreau.
Podkolzin finished 2021/22 pencilled into a lot of people’s top-six. Höglander finished the season on the IR, out of sight and out of mind.
But Höglander has been counted out before, and he’s beat the odds. He rocketed up prospect rankings in his Draft+1 year, and then walked into his first Training Camp with the Canucks and stole a job, somewhat unexpectedly. He’s still loaded with skills that are especially valuable in the modern game — puck possession, two-way awareness, creativity — and those haven’t gone anywhere, despite his step-back sophomore season.
After a summer of recovery and rehab, expect Höglander to come into Training Camp 2022 motivated. And if he does, except him to give Podkolzin a very real run for his money as the two jockey for position in the Canucks’ depth chart.
Maybe it doesn’t quite shake out that way. Maybe someone gets hurt, or someone else slips down the chart unexpectedly, and both Höglander and Podkolzin wind up in the opening night top-nine. Heck, maybe they even end up as linemates. But either way, one of the two is going to leave Training Camp with more of Boudreau’s trust than the other — and the competition for that trust begins now.

Prospect versus veteran.
Potential versus experience.
Skill versus versatility.
All of these classic hockey debates define the upcoming battle between Jack Rathbone and Travis Dermott.
It’s clear that the Canucks want Rathbone on their roster after he tore apart the AHL as a rookie pro last year. But actually carving a spot out for himself in the lineup will still be a challenge, and that challenge starts with Dermott.
There is a chance, of course, that the experiment involving Quinn Hughes on the right side is a success, and that the Canucks go into the 2022/23 season with a left side of both Rathbone and Dermott lining up behind Oliver Ekman-Larsson. But until that actually happens, it’s still far more likely that Hughes and OEL stay on the left, leaving just one spot up for grabs.
Dermott himself brings plenty to the table. He’s a smooth skater (though not as smooth as Rathbone), with solid offensive vision (though not as solid as Rathbone), and decent ability to transition (though not as decent as Rathbone). Where he actually outshines Rathbone is in experience — something that we know Boudreau values — and, at this point anyway, in own-zone competence. While far from a shutdown stud, Dermott has always done okay defensively against okay competition, and has some particular skills that stand out, like his bizarre ability to consistently break up two-on-ones by sprawling around with his stick flailing.
Neither player is likely to skate much on the power play, at least not at first. That means that they’ll be competing for a job on the merits of their 5v5 play, and perhaps on their penalty killing capability.
In terms of who is most likely to impress on the ice at Training Camp, it’s hard not to give the edge to Rathbone, who is one of the most skilled defenders in the Canucks’ entire system. But skill alone is not enough to earn a spot in Boudreau’s lineup. Dermott’s trademark versatility will go an awful long way, as will the knowledge that he’s been here before.
Speaking of that versatility, it affords Dermott another leg-up on Rathbone. If Rathbone doesn’t make the opening night lineup, he’s probably on his way to Abbotsford. If it’s the other way around, however, Dermott does have the ability to play on his off-side, so there’s another path available for him to sneak into the lineup.
On the right side, he’d face some more stiff competition from four established veteran RHDs.
And on that note…

Let’s get those emotional stakes back up to peak value.
There might not be a player on the Vancouver roster more universally beloved than Luke Schenn. The 32-year-old has played the best hockey of his career for the Canucks across two stints, and no partner has ever made Quinn Hughes look more comfortable.
The notion that Schenn might wind up on the outside of the Canucks’ 2022/23 lineup looking in does, and should, seem preposterous to someone reading it right now.
Nevertheless…
Tucker Poolman is seemingly healthy coming into Training Camp. And as his salary and term indicate, he started out last season ranked ahead of Schenn on the Vancouver depth chart. He’s not going to willingly cede that position, he’s going to fight for it — and the stakes could be higher than most realize.
Schenn, meanwhile, has been playing above his own head for a while now, and is full three years older than Poolman. As Poolman bounces back, Schenn could easily falter.
Tyler Myers is what he is, and at this point, he’s the Canucks’ best right-handed defender. He’ll slot somewhere into the top-four.
The other top-four RHD job, then, comes down to Schenn versus Poolman. If that job ends up being on Hughes’ pairing, the edge obviously belongs to Schenn, but it’s not quite a slam-dunk. Poolman was signed to be a potential Hughes partner, after all, and if he can rebound at all after a difficult debut season with the Canucks, there’s still a chance for him to claim that spot.
Then there’s the potential for the number of RHD jobs to shrink.
As we mentioned before, Hughes is trying out the right side during Training Camp. If he sticks there, then a top-four right side position disappears…and suddenly, Schenn and Poolman are in competition for a bottom-pairing job, with the other headed straight for the press box.
The same goes if the Canucks pick up any of the many talented RHDs that promise to hit the waiver wire between now and opening night, or if they manage to trade for one.
Either way, Schenn and Poolman are in direct competition. The only thing left to determine is whether that competition is for a top-four role or whether it’s for a spot in the opening night lineup altogether.
The potential for Training Camp sparks — and controversy — is palpable.
Content
Recent articles from Stephan Roget