11 free agents that the Canucks should NOT sign this offseason 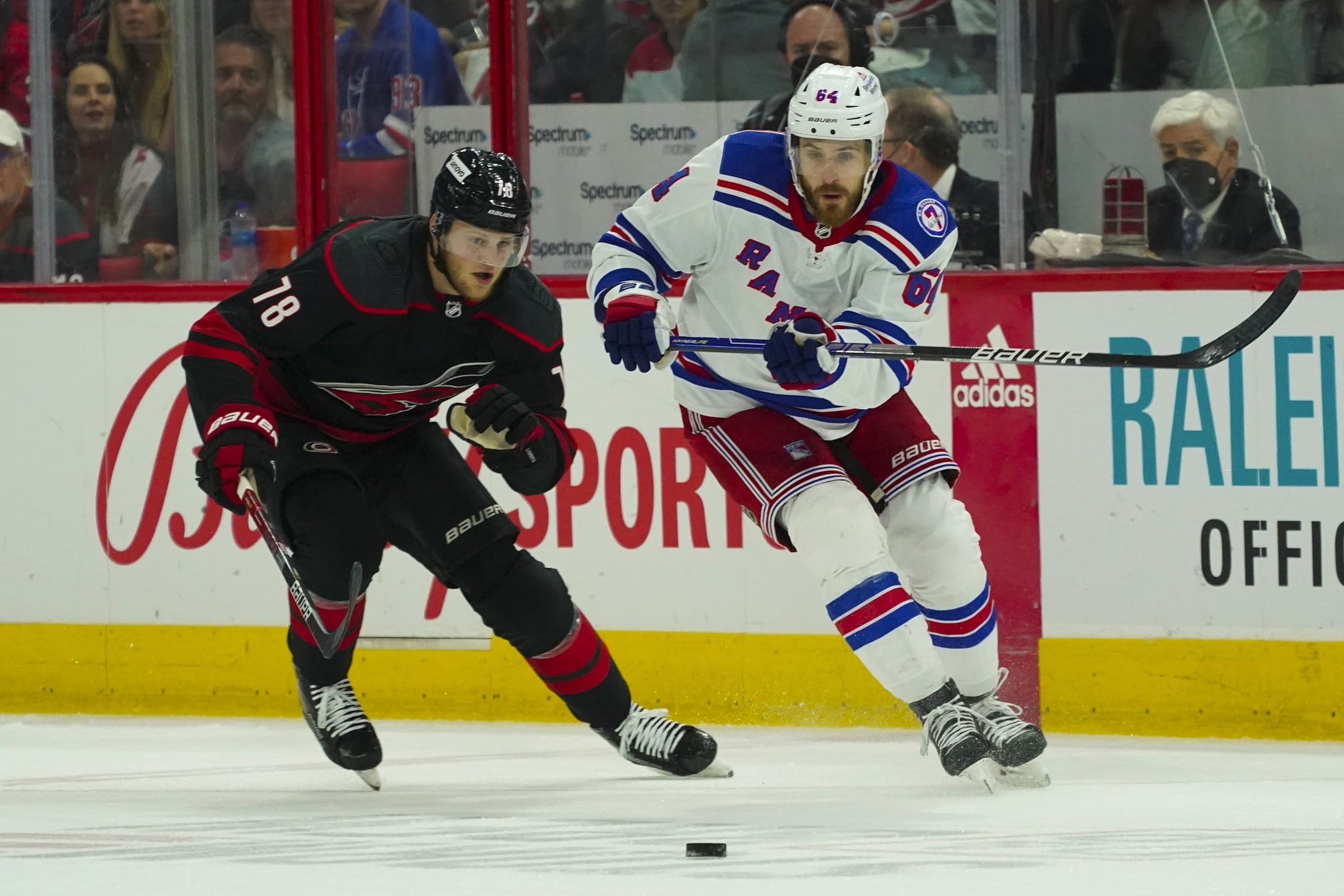 By Stephan Roget
7 months ago
It’s the offseason, and we at CanucksArmy are typically pretty big on telling the Vancouver Canucks what we think they should do at this time of the year.
Draft that player.
Sign this one.
Trade for those ones.
You know the drill.
But sometimes, it’s not enough to share which moves we think the Canucks should make in any given summer, because often the moves that an NHL franchise doesn’t make are every bit as important as the ones that they do.
Below, we’ve listed off 11 players on the 2022 unrestricted free agency market that we strongly feel the Canucks SHOULD NOT add to their roster — despite how appealing they might seem — and our reasons for avoiding them.

Expiring Cap Hit: $3.5 million
The Panthers paid a hefty price to acquire the hefty Chiarot at the Trade Deadline, sending a first round pick and a solid prospect to Montreal in exchange. Chiarot rewarded them by being Florida’s worst defender through two playoff rounds.
The Canucks have signalled their desire to get bigger and more physical, and Chiarot would add some diversity to a left side that already contains Quinn Hughes and Oliver Ekman-Larsson — but he’s just not worth the cost he’ll incur. Chiarot is one year removed from a run to the Cup Finals with the Canadiens, and somebody is going to give him a major pay raise despite all the evidence that his game is slowing down already at the age of 31. Avoid, and try to find a cheaper option at LHD.

Expiring Cap Hit: $1 million
If the Canucks want to get tougher and tougher to play against, they don’t come much tougher than Deslauriers. He’s more-or-less the reigning heavyweight champion of the NHL, and he’s also known for his considerable — and occasionally over the line — checking game. But because Deslauriers is a rare commodity, he’s also a prime candidate to be overpaid as a UFA.
In an economy where we’ve seen Ryan Reaves pick up more than $9 million in salary over the past four seasons, expect Deslauriers to get paid far too much. The Canucks don’t need someone making more than double the league minimum if they’re only going to be skating ten minutes a game. Contract efficiency is needed at the bottom-end of the lineup, now more than ever.

Expiring Cap Hit: $5.3 million
If the Canucks do end up trading one or more top-six talents, they could look at Domi as a readily available replacement — they could, but they shouldn’t. Domi does have a history with Bo Horvat in London, but he also has a history of terribly inconsistent play and both on- and off-ice immaturity. The Canucks can’t count on steady offence from someone who’s got just 20 cumulative goals over the past two seasons, but they can probably count on Domi contributing to the “country club” vibe in the dressing room and being a big distraction. Pass.

Expiring Cap Hit: $1.95 million
The chances of the Canucks bringing Gudbranson back to a market in which he was generally despised were already pretty low, but let’s make sure of it here. It’s true that Gudbranson thrived this season on Calgary’s third pairing, lining up behind one of the best and most responsible blueline units in the NHL. It’s also true that Gudbranson has done anything but thrive in almost every other situation he’s ever been put into. The odds of him suddenly being a drastically better play than he had been in the past at age 30 are slim.
As a sizeable RHD, Gudbranson is probably going to get paid far more than he is worth this summer. The Canucks already made that mistake once, no need to make it twice.

Expiring Cap Hit: $2.11 million (pro-rated)
Kane is reportedly looking for a salary in the $8 million range if he were to sign somewhere other than Edmonton. Coming off 17 points in 15 playoff games, he’ll probably get it, too, but he really shouldn’t. Take Kane’s history of inconsistency alone, and you’ve got reason to be skeptical of him as a long-term addition. Add in his off-ice volatility, and you’ve got a really questionable add to an already problematic dressing room. If JT Miller isn’t worth keeping around at that price at the age of 30, Kane certainly isn’t.
Factor in the multiple allegations of assault and abuse from multiple women, and you’ve got plenty of reason to not even bother calling Kane when free agency opens up in July.

Expiring Cap Hit: $4.25 million
On the surface, Klingberg looks like exactly what the Canucks are looking for. He’s a top pairing two-way RHD stud who has plenty of playoff success under his belt. Klingberg would make the Canucks’ blueline significantly better, but he wouldn’t come cheap. Here’s the thing: Klingberg just so happened to sign his previous, seven-year contract just before he broke out as a player. As a result, he’s been vastly underpaid for the vast majority of his career.
If Klingberg leaves Dallas, he’s doing so to finally cash in. The Canucks already have enough bloated, aging contracts on their back-end that they really don’t need to add another one, even one as high-quality as Klingberg.

Expiring Cap Hit: $7.25 million
Even at the ripe ol’ age of 35, Letang is a top pairing RHD who can still hold down more than 20 minutes a night. His physical conditioning is phenomenal, and though he’s slowed down a little, the age curve has been gentle and gradual. On top of all that, Letang has a long history with Jim Rutherford.
So, why wouldn’t he be a fit for the Canucks? Because if Letang is going to leave Pittsburgh, he’s going to do so because the Penguins can’t meet his contractual demands. And if he’s asking for that much, there’s just no way the Canucks can justify spending that kind of cash on someone who’s going to be retired before they’re truly contending. Letang is tempting, but that ship has sailed.

Expiring Cap Hit: $3.875 million
Miller gets some credit for keeping his head mostly above water in Buffalo, where he’s remained a passable RHD on a blueline otherwise bereft of right-handed talent. Solid at either end of the ice, Miller will probably earn a slight salary bump on the open market, and he might even deserve it.
But Miller’s best days are already behind him, and his time in Buffalo has almost certainly had a detrimental impact on his game. Do the Canucks really want someone who’s been playing Sabres Hockey for the past three seasons — especially someone who the Sabres have now seemingly decided that they’re better off without? Miller just doesn’t add much that the Canucks don’t already have, or couldn’t get for cheaper elsewhere.

Expiring Cap Hit: $1.225 million
Look, we all want Motte back with the Canucks. In a perfect world, where salary caps were not a factor, he never would have left. But if there were concerns about Motte being overpaid as a UFA before he went on a lengthy playoff run with the Rangers, those concerns are doubled now. Speaking of doubled, that’s what we can also expect to say about Motte’s cap hit by the time this offseason is complete.
The Canucks could absolutely use Motte in their bottom-six moving forward. What they really don’t want to do, however, is get back in the habit of chasing specific bottom-sixers in free agency. We just suffered through the bloat of contracts like Antoine Roussel and Jay Beagle, and while Motte is a far better player than either, the principal is the same. Contract efficiency needs to be key, and Motte is about to sign a very inefficient contract.

Expiring Cap Hit: $5.3 million
If the Canucks flip one or more top-six scorers, they won’t find many better replacements than Palat. But they won’t be the only ones looking at the veteran winger. Palat has won two Stanley Cups in a row, and might just add Number Three before the month is up. Teams are going to be willing to pay a lot for that experience, especially when it comes attached to a player still very capable of playing in the top-six.
Think of it this way: there’s only one real reason that Palat might leave Tampa Bay, and that’s because they can’t afford him. And if the Lightning can’t afford Palat, a player who has put in a decade of good work for them, why should the Canucks be any different?

Expiring Cap Hit: $1.35 million
Paul’s name has already been speculatively attached to the Canucks by some pundits, but he’s a bad idea waiting to happen. Every year, some previously unheralded bottom-six checking type goes on a run to the Stanley Cup Finals and makes a major contribution to their team’s success. Every time that player is a pending UFA, they’re handed a massive overpayment on the open market. See Jay Beagle for a recent example.
This year, that player is Paul. He’s got all the attributes that anyone might want in their bottom-six, and for that reason, a bidding war will almost certainly ensue over his services. We can probably expect Paul to sign something at or longer than four years for around $3.5-4 million. The Canucks have been there and done that, and they don’t want to do it again.