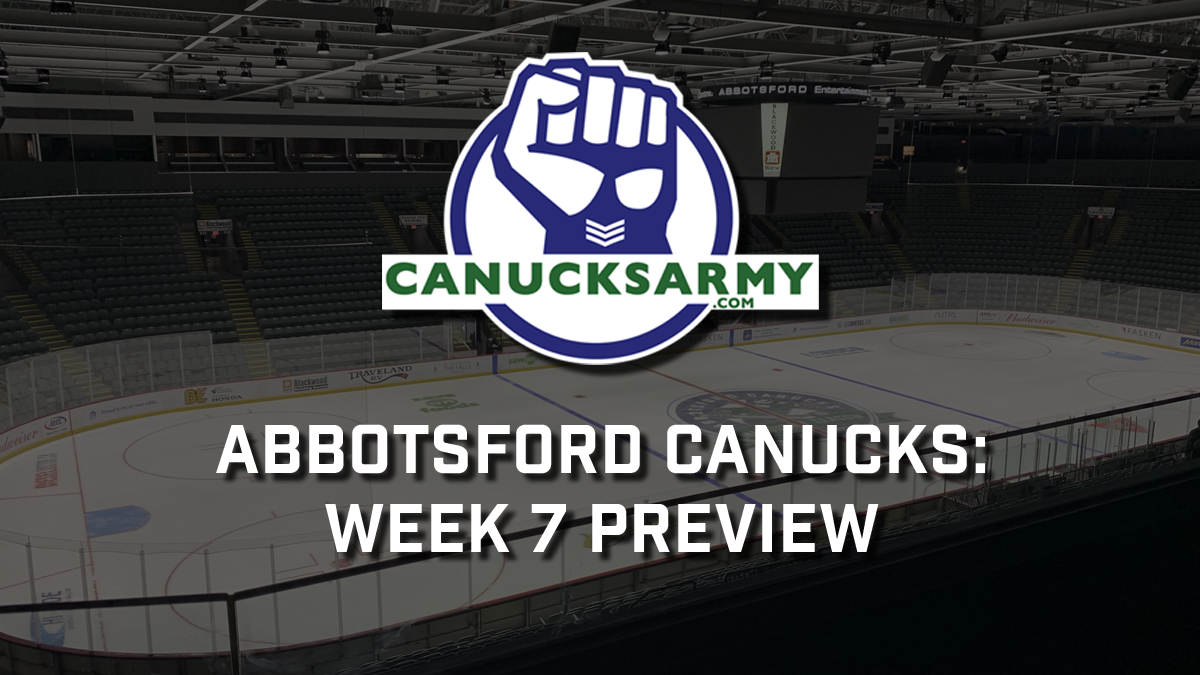 By Cody Severtson
2 months ago
Comments
The Abbotsford Canucks’ Canadian road trip went about as “Vancouver Canucks” as it could.
Four games against four non-divisional opponents and four points to show for it.

The Farm kicked off their six-game road swing with a game against the 28th-ranked Laval Rocket. The Canucks were outshot at 5v5 29 to 23 en route to a 4-2 loss.
After a two-day break, they faced a Toronto Marlies squad in the middle of a triple-header weekend. Despite facing an opponent not-twelve hours removed from their last game, the Farm gave up three early goals and another two late in the game for their third straight regulation loss.
During the Marlies game, the Farm looked outmatched for most of the game but rallied for three straight goals to tie the game. Unfortunately, after killing off an incredibly undisciplined five-minute major, the Farm gifted the Marlies a second power play opportunity and the eventual game-winning goal, again off an undisciplined penalty.
Advertisement
Ad
Advertisement
Ad
Their luck shifted in the back half of the Eastern portion of the road trip. First, the Farm ended their losing streak with a hotly contested rematch against the Marlies resulting in a 3-2 regulation win. The team then won a second close game in their rematch against the Laval Rocket.
The mixed results failed to push Abbotsford up the Pacific Division leaderboards. Though they’ve played the second-fewest games in the division, they’re one point back of the Coachella Valley Firebirds, who have a game in hand. By points percentage, the Farm is head-and-shoulders above the division’s bottomfeeders. The San Diego Gulls and Henderson Silver Knights have a combined 11-24-0-0 record and a negative-18 goal differential.
Going .500 to start their road trip didn’t necessarily hurt them, but failing to pick up points against non-divisional opponents is a rough miss that could hurt their playoff aspirations.
Advertisement
Ad
Advertisement
Ad
The 2022-23 AHL Playoff format is similar to the 2021-22 format, with the top-seven teams from the Pacific Division qualifying.
The Abbotsford Canucks are currently in eighth place.

The Farm closes its Canadian road trip with two games against the third-place Calgary Wranglers this weekend.
Not saying it’s “do or die.” But, for those wishing for Abbotsford AHL playoff home dates, these two games are critical.

General Manager Patrik Allvin announced today that F Karel Plasek has been loaned to HC Olomouc (Czech Extraliga) for the remainder of the 2022.23 season.

After missing the bulk of last season with a knee injury, Plasek sat out of training camp rehabbing from off-season hip surgery. Plasek had been in town during the Canucks’ Whistler training camp but did not partake in any of the events or on-ice sessions. It is unlikely he will return to Abbotsford this season.

Games 15 & 16 against the Calgary Wranglers

Abbotsford, by comparison, for those who enjoy pain:

Though his production has fallen off a cliff through his last seven games, Linus Karlsson has nonetheless acclimated very well to the AHL. 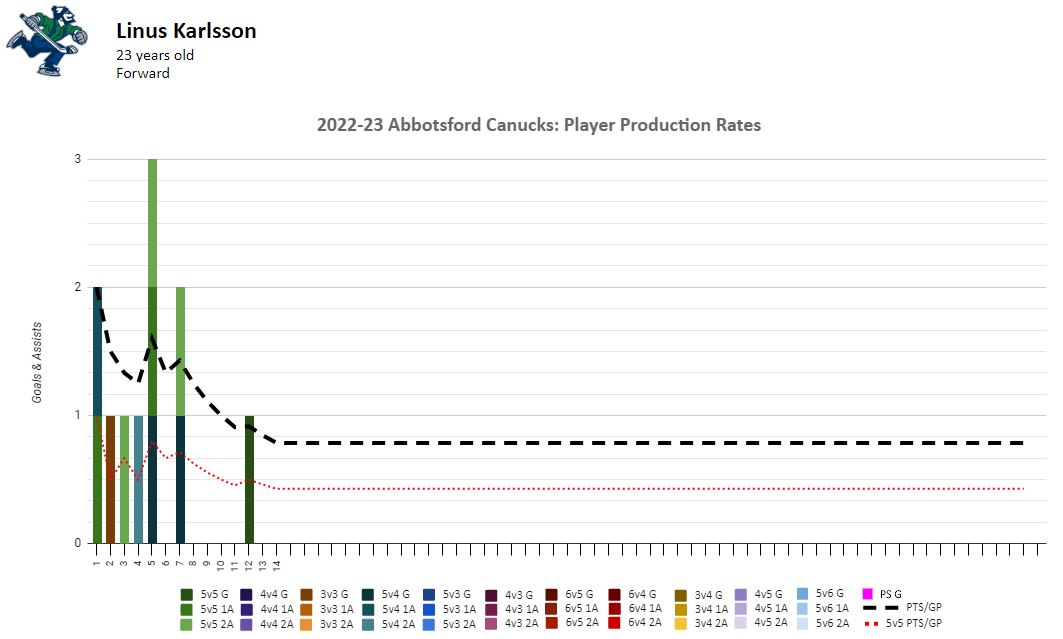 In Karlsson’s first seven games, he was well above a point-per-game with ten points, half of which came at 5v5. Over the last seven, Karlsson has struggled to find ways on the scoresheet, registering one 5v5 goal during that time.
The drop-off shouldn’t be concerning for Canucks fans, as the details within Karlsson’s game are very encouraging despite the drought.

Honestly though, he’s still doing a lot of good things in the AHL. Even through his scoring woes of late, he’s playing tough and getting to the net hard.

On the penalty kill, Karlsson has done an excellent job breaking up passes and springing himself and his F2 on breakaways.

At 5v5, Karlsson has established himself as an excellent forechecking presence. He frequently picks off exit passes and immediately sets up dangerous looks for Abbotsford.
Advertisement
Ad
Advertisement
Ad

Karlsson isn’t the biggest player, but he frequently uses his size to make his checks work for 50/50 pucks. This kind of tenacious physicality sees him win plenty of puck battles along the boards.

The best aspect of Little Things Linus’ details is his work rate when he makes mistakes.
Even after being dispossessed inside the offensive zone by the Silver Knights, Karlsson races to win the puck back to his defender to reset the play.

Karlsson is in a six-way tie for first in team 5v5 scoring despite his dry spell. So long as Karlsson’s details maintain, his production will almost certainly rebound.

We’re predicting that the Abbotsford Canucks will probably lose both games to the Laval Rocket but win both against the Marlies in a dominating fashion.

While we didn’t quite nail the prediction last week, we did guess correctly that the team would come out .500 on the weekend!
The Wranglers are on a massive heater, having won seven of their last eight games by a whopping score of 33-14!
Advertisement
Ad
Advertisement
Ad
With the odds not in their favour, we’re expecting another .500-split in Alberta for Abbotsford. Expect the Canucks to lose the Friday game in a blowout, but win the Sunday game in a closely contested match determined by special teams.