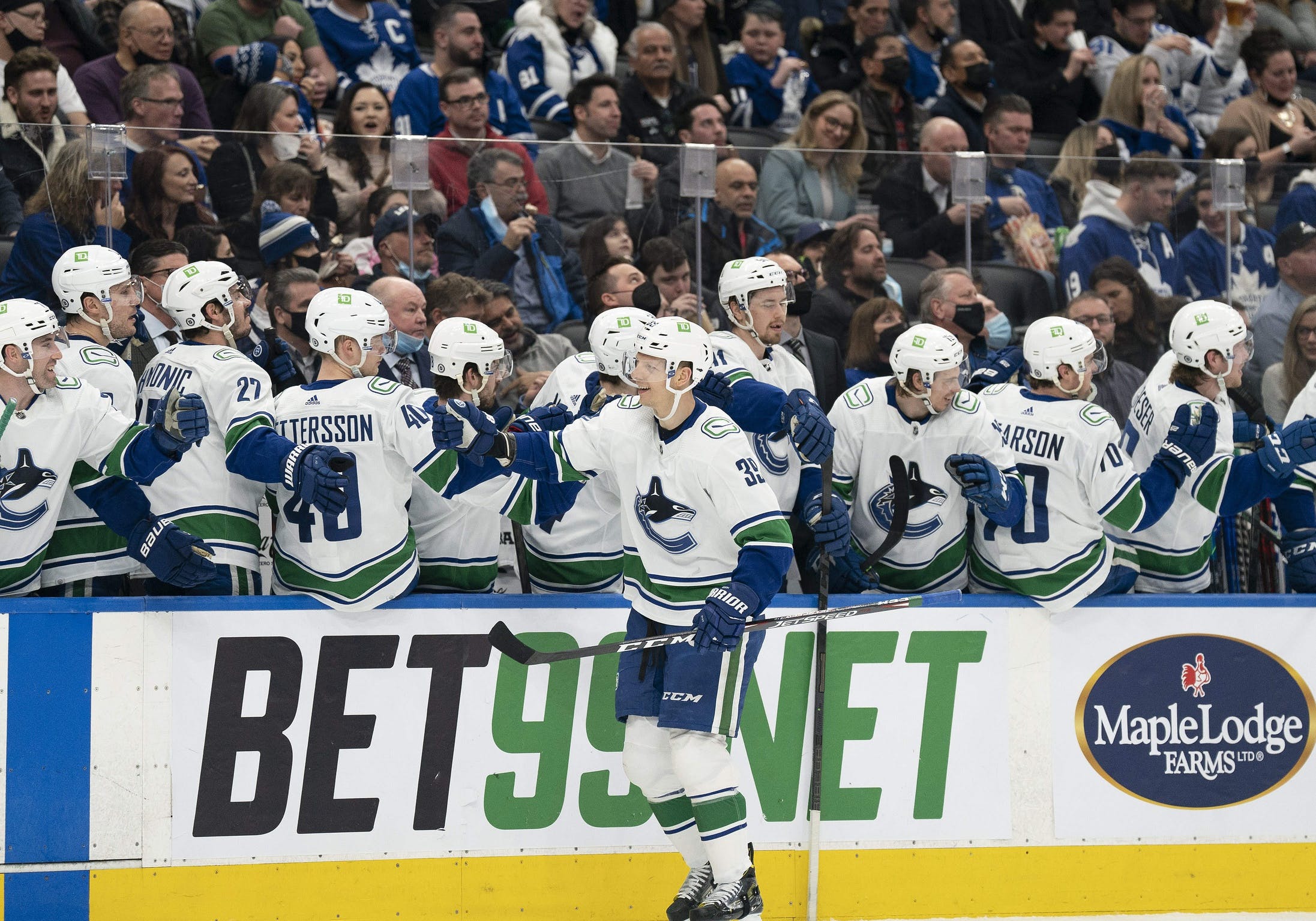 Photo credit: © Nick Turchiaro-USA TODAY Sports
By Michael Liu
4 months ago
Comments
After signing defenceman Danny DeKeyser to a professional tryout contract, the Vancouver Canucks haven’t yet closed the door on signing more players to a PTO ahead of training camp later this month.

Rutherford on another possible PTO signing – You never know, we like Chaisson a lot, we talk about him, we like his character and leadership.

Here are four candidates that could be offered a PTO to round out Canucks training camp.

Brought in on a PTO last season as well, Alex Chiasson spent his summer in Vancouver staying at Oliver Ekman-Larsson’s home. The forward didn’t have the best of starts to his time with the Canucks, but his last month was certainly memorable with 10 points in 10 games.

Despite only playing in the city for one season, Chiasson fell in love with Vancouver and is still hoping to get a contract. The organization appears to reciprocate those feelings with management holding his character in high regard.
“[The Canucks] love his character and leadership,” Rick Dhaliwal said during Sekeres and Price on September 11th. It stands to reason that Chiasson probably won’t have the same role as he did last season, but the winger was and still can be a useful depth option.
Advertisement
Ad
Advertisement
Ad

Could the #Canucks be bringing back Alex Chiasson?@DhaliwalSports: "They like Chiasson a lot, but they just can't sign him right now…they see him down the road as a guy that could help the kids in Abbotsford." @bcusedoil https://t.co/X62HmDPpUt

Look no further than Tyler Motte’s inability to find an NHL home as proof of how difficult it’s been for NHL teams to do business this offseason.
Motte, who the Canucks originally acquired from the Columbus Blue Jackets in exchange for Thomas Vanek at the 2018 NHL Trade Deadline, forged an NHL career for himself as an effective bottom-six winger in Vancouver. Motte became a quick fan favourite for his tenacity and work ethic.

An enormous save by J.T. Miller on Connor McDavid and a sneaky five-hole finish by Tyler Motte. The only thing we can conclude is that Motte is a better goal-scorer than McDavid. #Canucks pic.twitter.com/vB7lyZHqRa

It’s a bit of a surprise that Motte has gone unsigned for as long as he has, but with the rumoured asking price, it appears that teams just couldn’t find a way to fit him in. Perhaps a return to Vancouver could be in the cards with his energetic presence sorely missed. Motte would be an excellent addition if he chooses to return in the blue-and-green.
Advertisement
Ad
Advertisement
Ad
UPDATE: Tyler Motte and the Ottawa Senators have reportedly agreed to terms on a one-year deal worth $1.3 million.

Rask long has suffered from the connotation that he is overpaid. The Swedish centre broke out at just the right time in Carolina, potting 48 points in 80 games back in the 2015-16 season. That earned him a 6-year, $4 million AAV deal which saw him continue to produce at a solid middle six clip.
That all changed when Rask was dealt to Minnesota. He never found his feet, finding himself struggling and healthy scratched at times. Rask was dealt this past season to the Kraken for future considerations and was able to stick in the NHL. He managed to score 21 points in 47 NHL contests in the 2021-22 season.

up to the task is victor rask! 😏 pic.twitter.com/x8e09ZbJ2f

Rask definitely still has some offensive punch, but at this stage of his career, he’s a player that should be shoring up a bottom 6. That’s not a bad thing, as he’s proven to be a solid two-way player who can chip in on the scoresheet as well. That defensive side to his game will be the biggest selling point, and for the Canucks, it might just be worth seeing what Rask can bring on a PTO.
Advertisement
Ad
Advertisement
Ad

Long gone are the days that Anton Stralman featured in the Tampa Bay top 4. At the age of 35, the Swedish defender is in the twilight of his career. However, it doesn’t mean that he’s completely washed up. Spending last season in the desert with the Coyotes, Stralman still managed to put up 23 points in 74 games, while being his usual reliable self defensively to boot.

It wouldn’t be a bad idea to bring him in on a PTO. Being a right-handed rearguard, Stralman is a bit of a premium commodity, even if he’s a little on the older side. But it isn’t a terribly risky move, especially in a position where the Canucks could use some additional depth.
Stralman would bring another veteran voice to the dressing room, having gone through his fair share of cup runs and playoff rollercoasters. At worst, he could be a good mentor figure for the players in Abbotsford, serving as the Canucks’ 7th defenceman.
Advertisement
Ad
Advertisement
Ad
Vancouver’s training camp is set to get underway on September 23rd in Whistler, after the Young Stars Classic wraps up in Penticton.