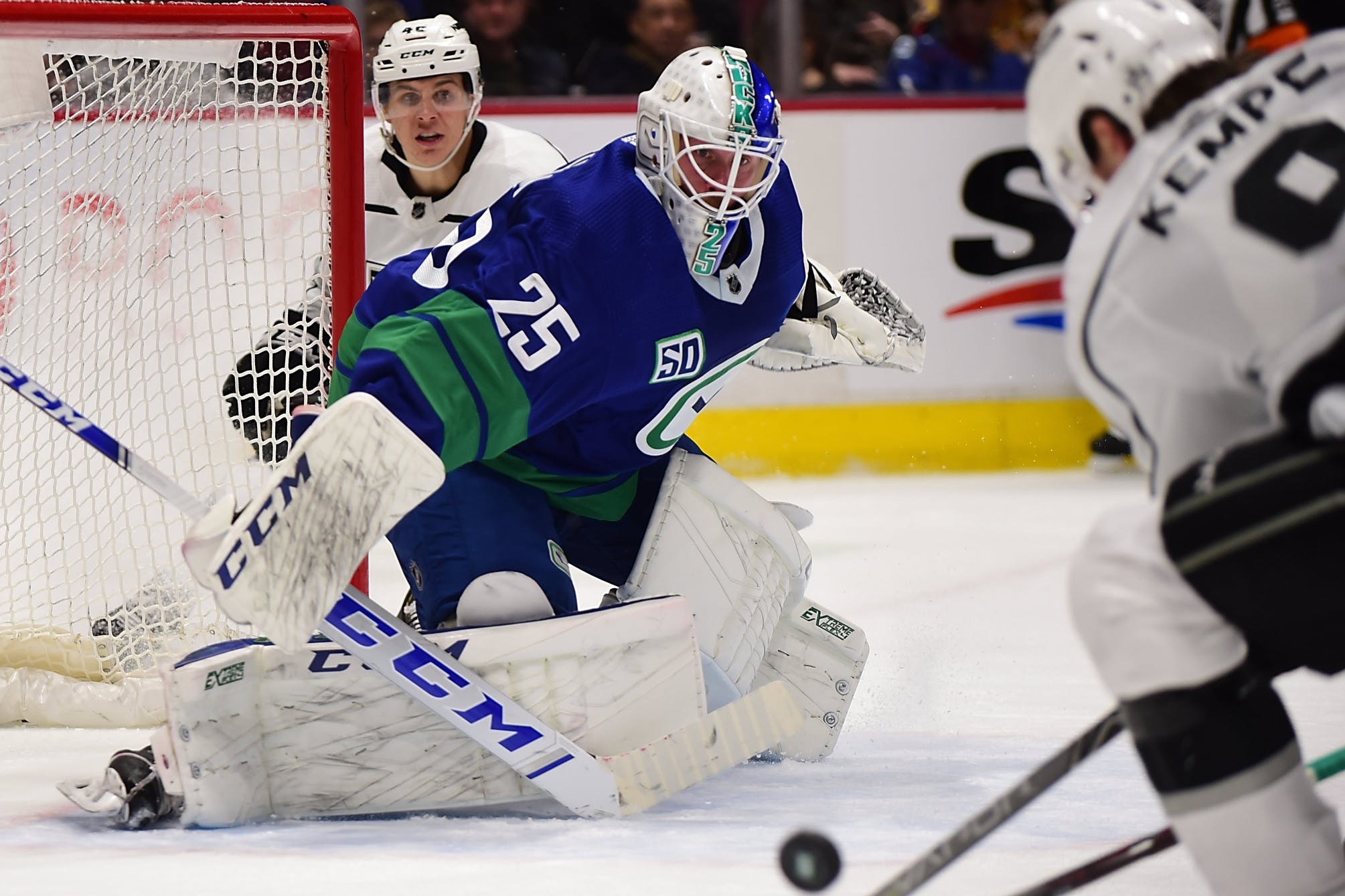 Photo credit: © Anne-Marie Sorvin-USA TODAY Sports
By Stephan Roget
3 years ago
Comments
Folks, the year 2020 is upon us, and with the dawning of a new decade comes perhaps the dawning of yet another crease controversy in Vancouver – and, at the very least, a series of difficult netminding decisions.
As a pending unrestricted free agent, Jacob Markstrom can be offered a new contract at any point now, though details about any actual negotiations have been scarce. Though Markstrom has once again been among the team’s more valuable players, and though a vocal segment of the fanbase would like to see him re-signed at any cost, it may not be quite so simple as giving him what he’s worth. The starter-quality goaltending of Thatcher Demko, the professional success of Mike DiPietro, the realities of the salary cap, and the impending arrival of the Seattle TBAs all greatly complicate the situation – and there are no easy answers.
Whether the Canucks decide on a path forward immediately by making a transaction – or by letting Markstrom walk, an unpleasant possibility – or whether they postpone the decision by re-signing Markstrom, a choice will have to be made at some point before the 2021 Expansion Draft.
Advertisement
Ad
Advertisement
Ad
Hard questions will need to be asked in the interim, and as the goaltender with the most contract uncertainty heading into 2020, all of the answers are going to center around Jacob Markstrom.
With that, we ask you:
What would you do with Jacob Markstrom and his impending free agency?
Last week, we asked you:
What New Year’s Resolutions would you set for the Vancouver Canucks?
Given that the article dropped on Christmas, it’s understandable that responses were sparse.
J-Canuck:
Resolve to score the first goal!
truthseeker:
lol….no doubt!
glovesave:
Resolution for all forwards: No more friendly-fire on your goalies. Please.
Resolution for someone with the initials L.E.: If you’re skating at practice and find yourself running into what appears to be a 6’4 roadblock, don’t run it down. It’s probably your goalie. Thanks, The Management.
Advertisement
Ad
Advertisement
Ad
Fortunately, this author also happened to write a list of resolutions for the entire team, so we’ll copy and paste those here to pad out the rest of this piece – and wish you all the best in 2020!
Elias Pettersson
Should make an anti-resolution, and just promise to remain Elias Pettersson in 2020.
JT Miller
Should resolve to try going by “Jon Miller” for a while, just to see what it feels like. It’s the sort of name that is so plain, it’s exciting.
Brock Boeser
Should resolve to commit his first act of evil. Vandalize public property, steal a chocolate bar, kick over a mailbox. Just do anything to prove that he has the capacity for something other than wholesomeness.
Bo Horvat
Advertisement
Ad
Advertisement
Ad
Should resolve to kickstart the “Road Goals Matter, Too” public awareness campaign.

It was reviewed for a kick, but the goal stands and Bo Horvat ties the game with his first goal inside Rogers Arena this season. #Canucks pic.twitter.com/2FSLaYPkoQ

Josh Leivo
Should resolve to stop “falling” into the boards so hard that his knee shatters. Alternatively, Leivo could resolve to kickstart the “George Parros, Pull Your Head Out Of Your Ass” public awareness campaign.
Tanner Pearson
Should resolve to find a word that describes his scoring rate and has fewer negative connotations than “streaky.” Maybe mercurial? Seasonal? Mason Raymond-esque?
Adam Gaudette
Should resolve to prove his geek cred by adopting a tattoo/celly combo of a more obscure DC Comics hero. Might we suggest Booster Gold or Matter-Eater Lad?

(For the non-nerds, that's his name in the Kryptonian parlance.)

It really only works in text format, but I still think it has potential. Pass it on.#Canucks pic.twitter.com/E8aQDteLQN

Antoine Roussel
Should resolve to incorporate his home country’s history in more of his goal celebrations. Make a human Eiffel Tower with teammates. Mime chopping off the opposing goaltender’s head with a guillotine. Storm the penalty box, Bastille-style. That sort of thing.
Advertisement
Ad
Advertisement
Ad
Jake Virtanen
Should resolve to save his first career hattrick for a weekend game, for the sake of his most dedicated fans.
Jay Beagle
Should resolve to get into even more post-whistle scrums. Basically, to never not be starting a fracas when play is not in session. We want Beagle shoving people in the hallways during intermissions in the year 2020.

Kapanen and Beagle engage in a scrum after the whistle. #LeafsForever pic.twitter.com/yT2BSWQpVe

Tyler Motte
Should resolve to adopt the trademark move of the player he was traded for, Thomas Vanek. Honestly, we just want to see more breakaway clappers in 2020, no matter who they come from.
Brandon Sutter
Should resolve to swap bodies with the much more durable Tim Schaller through some sort of mind-switching plot, just like Doctor Octopus did to Spider-Man in the comics.
Advertisement
Ad
Advertisement
Ad
Tim Schaller
Should resolve to not let Brandon Sutter swap bodies with him. Also, to stand next to Tyler Motte in more photos, because it’s a really flattering look for him.

Alex Edler in on the fore check and Mike Smith learns to fly. #Canucks #Flames pic.twitter.com/PIxkpDZi10

Chris Tanev
Should resolve to not get moved at the Trade Deadline because he’s too valuable to part with – and not just because he’s injured like in every other season.
Quinn Hughes
Should resolve to finally pass that other star rookie defenseman in the scoring race, just so that he can look at the rookie point totals and ask “Dude, where’s Makar?” If that’s not possible, then he should resolve to look less high in all his candid photos.
Tyler Myers
Should resolve to learn how to balance the puck on top of his head and skate it all the way up the ice. We don’t think this breaks any current NHL rules, and it might just be the perfect breakout plan.
Advertisement
Ad
Advertisement
Ad
Jordie Benn
Should resolve to make it through the next three broadcasts without explicitly being referenced as “Jamie’s brother.” And speaking of family, a resolution to listen to his mother more wouldn’t hurt.

Jamie and Jordie Benn got visors for Christmas from their Mother 😂😂. pic.twitter.com/jzjG0VH2V2