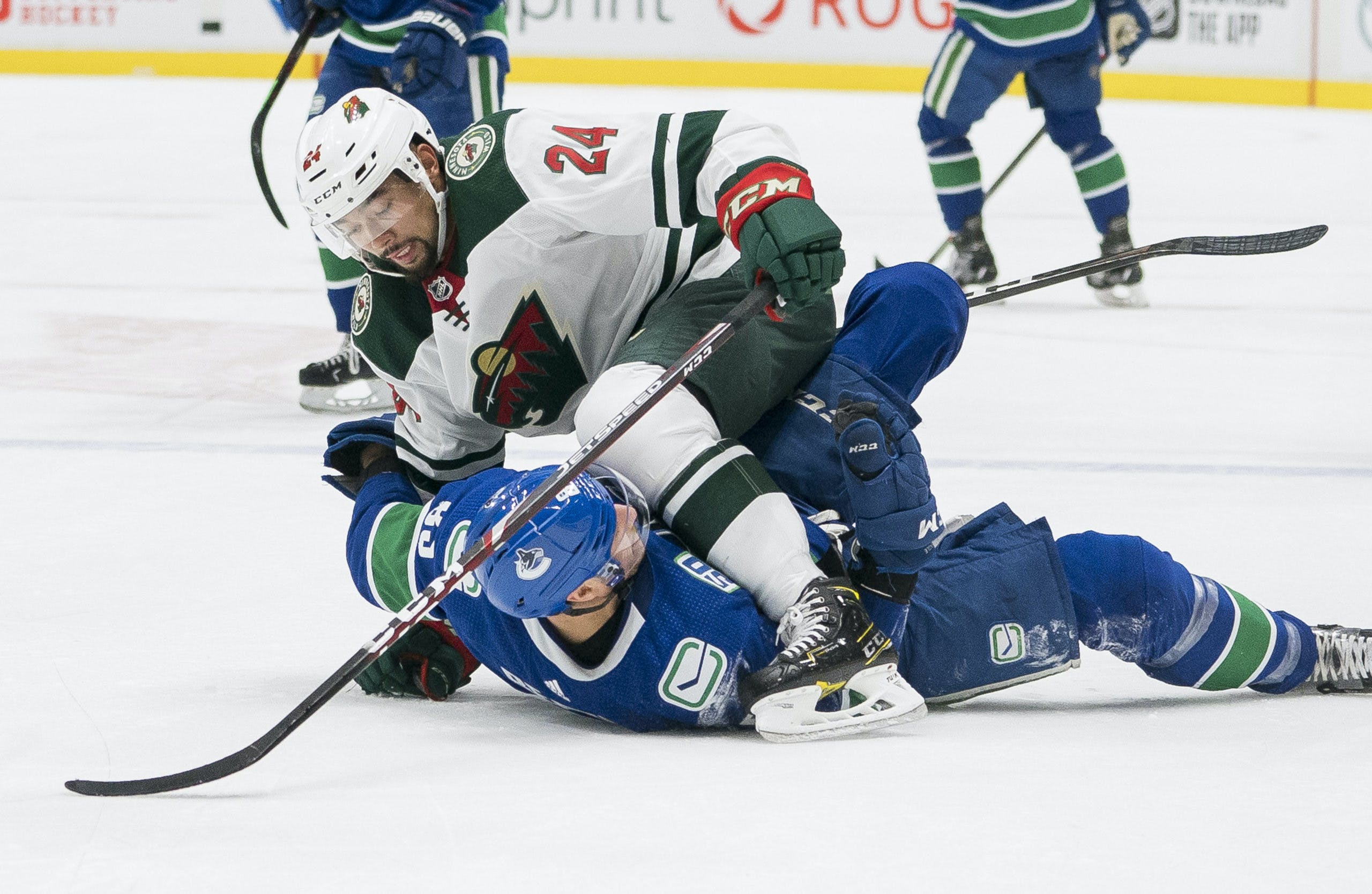 Photo credit: Bob Frid-USA TODAY Sports
By Michael Wagar
2 years ago
Comments
Major changes to team dynamics seemed to be the shared characteristic for both teams tonight. The Canucks entered the game with their big-name acquisition, who hopes to bring offensive firepower while some of their impact forwards are on the shelf. Meanwhile, the Wild played their second game since Bruce Boudreau was fired.
Aside from giving up the first goal on the first shot 63 seconds into the game, the Canucks actually played quite well out of the gate. They controlled shot share and the majority of the play through the first 10 minutes especially before taking a somewhat confusing too many men penalty, which stalled things slightly for the home team.
It was another early period goal that breathed some life into this game. This time it was for the good guys. You could say that Quinn Hughes gifted Jay Beagle a goal and you wouldn’t be wrong. The assist was the cherry on top of what went down as a terrific period for Hughes, who showed a ton of jump.
Advertisement
Ad
Advertisement
Ad
Before the Wild’s next go-ahead goal came a considerable lull in play. It felt like the kind of stereotypical Wild-Canucks game fans have been treated to for the better part of the past two decades, which stood in contrast to the eventual excitement of the third. The final 20 minutes was kicked off by a goal generated by the top line off the stick of JT Miller. The action didn’t slow there. On the next shift for that line, they were able to give the Canucks their first lead of the contest.
It was a welcome sight to see play pick up drastically and give us an entertaining finish to regulation and into overtime. The extra session featured healthy doses of Hughes, Toffoli, Pettersson and Miller, but nothing came of it aside from a ticked-off Jacob Markstrom.
Advertisement
Ad
Advertisement
Ad
Pettersson and Miller each managed to score magnificent goals in the shootout, but the Canucks weren’t able to get another from Toffoli, Pearson and Horvat when they needed it and would eventually fall 4-3.
Lines
The much-anticipated addition of Tyler Toffoli into the lineup finally arrived tonight, as the newest Canuck was featured on the first line, taking the spot of the injured Brock Boeser. Tyler Motte made his way back into the lineup at  the expense of Zack MacEwen. No changes were made on the back end or in goal since the last game.

Highlights
Jay Beagle and Quinn Hughes connected to get the Canucks on the board. The Calder candidate was released from the box seconds before being sprung on this two on one. Finishing off the patient passing play and ending a 42 game goal drought was Beagle.
Advertisement
Ad
Advertisement
Ad

Quinn Hughes on a 2-on-1 feathers a perfect pass to Jay Beagle who beats Dubnyk to score his 2nd of the year. #Canucks #mnwild pic.twitter.com/IJXyFd3Krk

The Wild took the lead once again on this Luke Kunin one-timer from the slot. The goal came following over two minutes of sustained pressure and a bad line change by exhausted Canucks.

GOAL. Luke Kunin sneaks a puck past Markstrom to give Minnesota the lead.

And now I give you back to back goals from Miller. The first came off a speedy pass from Toffoli, as he earns his first point as a Canuck.

JT Miller has his career-high 23rd goal of the season and Tyler Toffoli has his first point in his first game with the #Canucks pic.twitter.com/wBZQvUbbs6

Stecher finds JT Miller with some time and space and he wires his 2nd of the game. #Canucks pic.twitter.com/L0PRWQ8Cjm