Advertisement
Ad
Is Anyone to Blame for Nikita Tryamkin Leaving the Canucks? 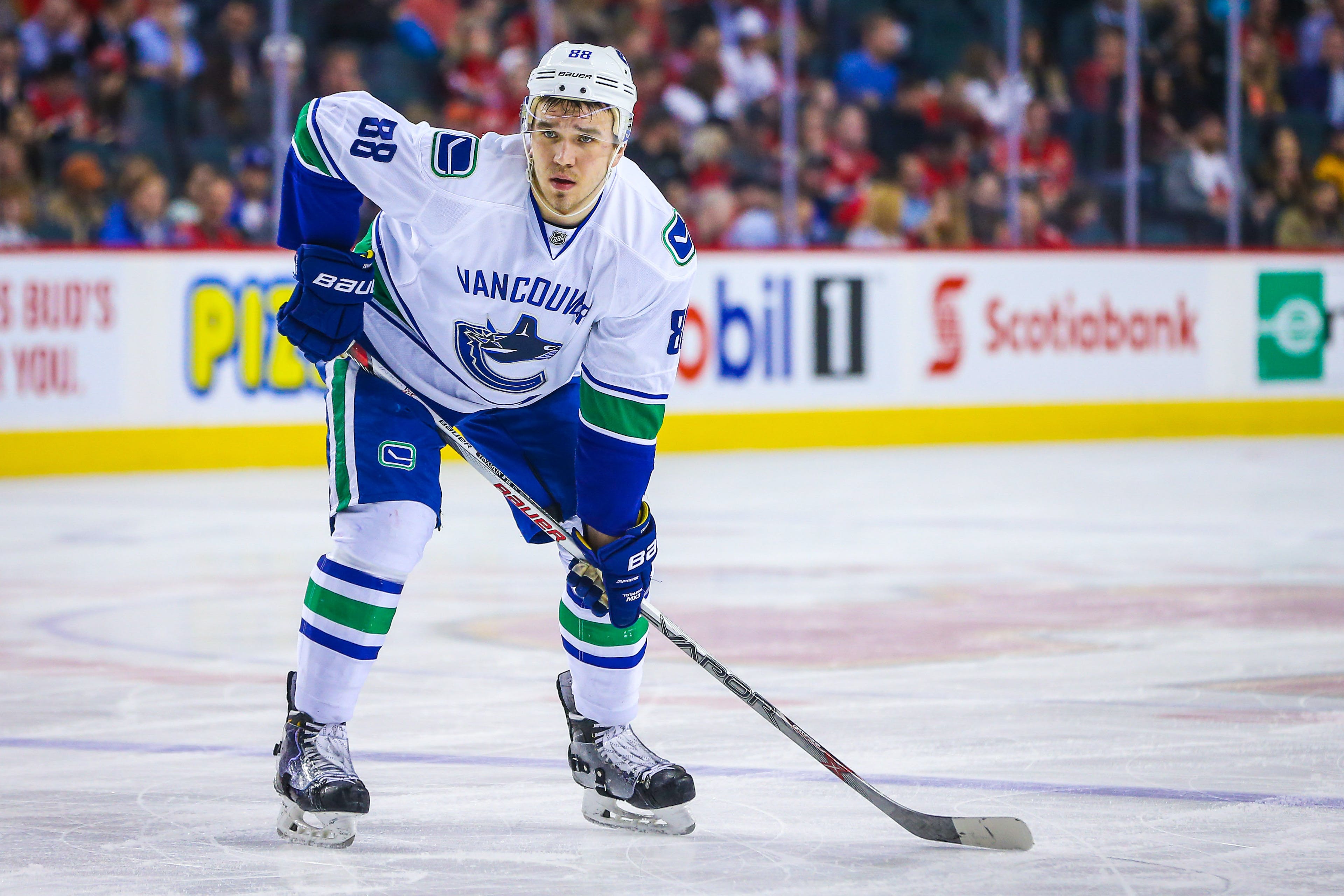 Photo credit: © Sergei Belski-USA TODAY Sports
By Vanessa Jang
5 years ago
Comments
Canucks fans were shaken Thursday morning when they woke up to news that Nikita Tryamkin had decided to sign in the KHL. Despite never having publicly spoken in English, he became a quick and easy fan-favourite with the personality he displayed on the ice. The big Russian played 66 games this season before deciding that the NHL and North America was simply not for him.
When the news first broke, fans immediately jumped off the Tryamkin bandwagon and turned into cynics, and rightly so as there are justifiable reasons as to why they should be angry. Tryamkin had his spot in the best league in the world, but he simply didn’t want it. During the season-ending press conference, he stated that it was in his best interest to play in Vancouver. Apparently, that’s not how he feels now.
However, this situation occurs quite frequently around the league and players simply use that statement to appease the media and fans. Despite the crowded blue line, Tryamkin had played well enough to earn a full-time roster spot in seasons to come. It was laying on a silver platter and there for his taking, but he decided to pass.
Before the start of the season, the Canucks openly stated that they hoped Tryamkin would make the move to Vancouver. They wanted him so badly that they added a no-AHL clause in his contract, giving him reassurance that he would stick with the big club. When times got tough, and his conditioning was not up to par, management asked if he would possibly go down to Utica on a brief conditioning stint. As expected, Tryamkin denied their request. This was the first sign of the potentially tense relationship between the two sides.
Advertisement
Ad
Advertisement
Ad
From the Canucks’ standpoint, they were acting on Tryamkin’s best interest. He wasn’t in shape when he arrived at training camp, and it carried on for essentially the first-half of the season. He found himself as a healthy scratch because of his fitness, and yet he refused to be sent down on a conditioning stint. You can call him stubborn at the time, but Tryamkin did have the right to veto the move per his contract.
According to the KHL’s interview with Tryamkin, his reason for leaving was due to the lack of ice time.

Tryamkin: "I would not get pleasure from the game and (instead) just sit, look and realize that there’s nothing you can do." #Canucks

Tryamkin: "During the season, I was not happy with some of the matches. Sometimes I just do not understand – why?" #Canucks

Tryamkin played under 12 minutes in just one game throughout the entire season. Looking at his TOI across his 66 games, 16:32 was the median. Yes, there were nights when he played under 14, but there were far more games with 15+ minutes of ice time. From that standpoint, it’s certainly strange that he would cite his TOI as the reason for leaving. As we’re all too aware, the Canucks organization doesn’t tolerate entitlement from their young players. As a rookie on the team, let alone amongst the defence core, other players are higher than Tryamkin on the pedestal. Being frustrated by the lack of ice time is the easiest excuse to make, though it’s obvious that it couldn’t be the only one.
Advertisement
Ad
Advertisement
Ad
Let’s be honest, if Tryamkin really wanted to play in the NHL, he would be doing everything he could to stay. With the cultural and language barriers, it’s evident that he was a lost puppy during his first few months. From what we witnessed on the ice, his primary means of communication were facial and physical movements. There didn’t appear to be any noticeable progress of him attempting to adapt. If he remained in the NHL, it would be a necessity for him to embrace the North American culture. His departure might suggest that the NHL lifestyle, although lavish and affluent, wasn’t worth undergoing cultural assimilation.

Jeff Paterson: “I was in the (locker) room enough and he looked miserable in the early going. Last year, he looked completely shell-shocked. I remember talking to some of his teammates about doing their part to try to involve him, even with the language gap – taking him out to dinners on the road, take him out to whatever activities. Guys said they were doing all they could to make him feel like a part of this group. In the second half of the season, when he was playing, he felt more part of that group. But in the early going, he didn’t look like a guy who was living the life in the NHL.” (Source)

The reasons above are quite cynical and do paint Tryamkin in a bad light, but there are also factors to be considered which take into account his personal life. Transitioning from the Russian to North American lifestyle is, by no means, an easy task. Along with his wife, he moved to an unfamiliar country halfway across the world and knew nobody. While he was on lengthy road trips with the team, she likely encountered her own struggles of feeling isolated and different. Given the fact that he’s merely 22-years-old, it would be hard to imagine he wasn’t homesick. In this instance, it would honestly be wrong to blame a person for wanting to go back to his comfort zone.
Advertisement
Ad
Advertisement
Ad
One could also put the fault on Canucks front-office for the loss. As the managers of the organization, Trevor Linden and Jim Benning are responsible for ensuring that their players are taken care of on a day to day basis. Especially for someone with experience in the North American lifestyle, it is their role to make the transition as comfortable as possible. Tryamkin was the sole Russian in an organization consisting of primarily Canadians and Europeans. Nikolay Goldobin was brought in, albeit towards the latter end of the season. The Canucks have not exactly been known as a Russian-hotbed of a hockey team. Therefore, this situation should stand as a learning experience. They do not necessarily have to avoid bringing in Russian players, but rather learn how to accommodate them best.
It’s easy to put the blame on management in this ordeal, but it ultimately is Tryamkin’s decision to leave. By no means are they off the hook, however. According to Dan Murphy, Benning’s contract offer was extremely competitive and on the “high end” of comparables. Give him credit as he did try to keep him and was willing to throw in extra money. You can’t fault Benning on that part because it was Tryamkin’s decision to turn down the offer.
Advertisement
Ad
Advertisement
Ad
Along with Troy Stecher, Tryamkin was a crucial part of the Canucks’ rebuild process. With his departure, that project took a significant step back. His potential arguably exceeded any other young defenseman within the organization, and it’s a shame that he decided to leave. If you want a silver lining, Ryan Biech confirmed that the Canucks retain his rights until 2022, when he’s 27 years-old. If it doesn’t work out by then, it may be wise for management to explore trade possibilities. Tryamkin’s future in the NHL, let alone Vancouver, is unknown. Perhaps he wasn’t comfortable with the North American environment, or maybe the Canucks organization simply wasn’t the right fit. Many other teams around the league have experience with Russian players and would surely welcome a hulking 6’7, 265-pound defenceman.
Advertisement
Ad
Advertisement
Ad
So who’s to blame for Tryamkin’s decision? Technically, every party within the organization bears some sort of fault. With management, they certainly could have done more to help the transition. For a player moving to an unfamiliar continent with different cultures, it was foreseeable that it was going to be a tough transition. Especially given the fact that this organization hadn’t dealt with many Russians in the past, more work could have been done to help. The coaching staff also bears some responsibility for the lack of ice time. Although give credit to Doug Lidster because he appears to have been a significant influence on Tryamkin. For the players, at least they attempted to help and welcome Tryamkin. From what we’ve witnessed, verbal communication was not there. However, we did get to see the bonds he’s created with his teammates on the ice. There were many gif-able moments and Grainne Downey laid out just a few in this week’s Babych Please.
Advertisement
Ad
Advertisement
Ad

Tomlinson on Lidster: "He should get a lot of credit for Tryamkin and Stecher." #Canucks

In the end, it is ultimately Tryamkin’s own decision to leave the Canucks. It’s hard to question his character when you think about the different circumstances. He was a new player in a new organization in a different country and city. The organization most definitely could have done more to ease the transition, but they should now look at this as a learning experience. Quite honestly, you cannot fault him for being homesick. However, he certainly could’ve been more receptive, open, and optimistic about playing in the NHL. There isn’t a single person to blame in this situation as every individual in the organization bears some sort of fault.
There’s no doubt that losing Tryamkin is a huge blow to the Canucks future. Should he choose to come back and give it a second change, he’d be welcomed with open arms. For now, all the organization can do is learn from what went wrong.
Advertisement
Ad
Advertisement
Ad