Advertisement
Ad
Have the Vancouver Canucks’ two rookies been their best players so far in 2021? 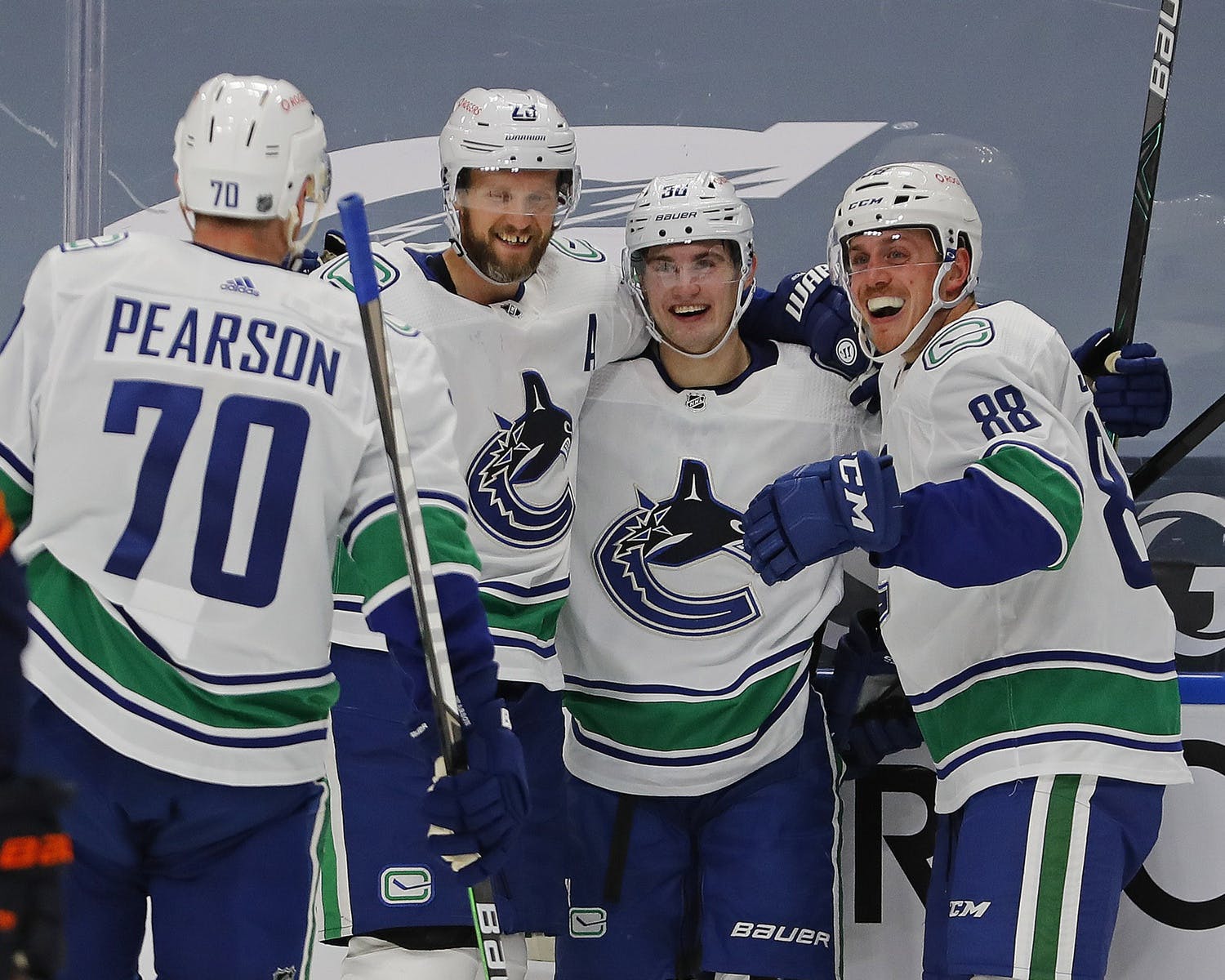 Photo credit: © Perry Nelson-USA TODAY Sports
By Stephan Roget
1 year ago
Comments
Call it a small sample size. Beginner’s luck. Jumping to conclusions, putting the cart before the horse, counting chickens before they’re hatched; yadda, yadda, yadda.
Forget all that, because we’re going to come right out and say it anyway: not only have the Vancouver Canucks’ two rookie skaters achieved great success through the first two games of the 2021 season, there’s a strong argument to be made that Nils Höglander and Olli Juolevi have been the team’s overall best players thus far.
Sustainable or not, that has to bode well for the future of the franchise.

Before training camp opened up, one of the hottest debates in the market was whether Höglander was best served by a season on the taxi squad or an assignment to Utica.
Then he forced his way into the opening night lineup and rendered the argument moot. Now, the only question people seem to be asking is, “Is Höglander really as good as he looks?” And the answer, through two games, appears to be, “No, he’s even better than he looks.”
Advertisement
Ad
Advertisement
Ad
Like Brock Boeser, Elias Pettersson, and Rick Rypien before him, Höglander made headlines by scoring in his first career NHL game. There are those who believe he also deserved a secondary assist on Bo Horvat’s season-opening goal, but league scorekeepers felt differently. Regardless, Höglander has thus far been on the ice for two goals for, both of which he had an integral part in, and only one goal against – despite playing the bulk of his minutes against Connor McDavid. In fact, none of McDavid’s three goals in Game Two came with Höglander on the ice. Sure, Ryan Nugent-Hopkins’ 5-2 marker did come as the result of a failed zone-exit pass from Höglander, but, hey, nobody’s perfect.

Advertisement
Ad
Advertisement
Ad
Goals, of course, whether they be for or against, are only a portion of the picture when it comes to Höglander’s early on-ice excellence. The eye-test says that Höglander is already winning board battles, holding onto the puck, and setting up plays like a seasoned veteran; to say nothing of the entertainment factor. Nils may look like a male model and have a last name ending in -lander, but he can turn in all sorts of different directions.

Hoglander clearing some space for himself in front pic.twitter.com/hSr3jXYK0S

Fear not, anti-analytic types, because this time the fancy stats only serve to underline what appears on the surface to be a fearless two-game debut. Höglander’s possession numbers aren’t just among the best on the team — including the best Expected Goals rate of any Canuck — they’re stellar by any measure of comparison.
Advertisement
Ad
Advertisement
Ad
Defensively-speaking, Höglander and his linemates spent both games shutting down Oilers all over the ice. Consider that, in Game One, McDavid played 9:13 of even-strength time against Höglander — more than any other Canucks player, forward or defence — and went pointless. For Game Two, McDavid got away from the Höglander matchup, facing him for fewer than three five-on-five minutes, and notched a hattrick.

Höglander’s tremendous play was difficult to ignore, but Juolevi’s, on the other hand, has to be paid close attention to in order to be appreciated. We knew coming in that Juolevi’s game was safe, steady, and unspectacular, but that doesn’t mean it can’t be objectively measured — and by any objective measure, Juolevi is crushing it.
Unlike Höglander, Juolevi has yet to be entrusted with big time or tough matchups by coach Travis Green. He’s playing the majority of his minutes against bottom-sixers like Kyle Turris, Jesse Puljujarvi, and Josh Archibald, and pulling down totals reminiscent of Oscar Fantenberg and Jordie Benn last year, but with significantly better results.
Advertisement
Ad
Advertisement
Ad
Juolevi’s possession metrics are among the best on the team, and the best of any Canuck defender, period — Quinn Hughes included. Surely, a lot of that has to do with the sample size and quality of competition, but defenders like Fantenberg and Benn put up far worse numbers against similar competition all season long in 2019/20, so it’s at the very least an encouraging start.
At this point, Juolevi has been on the ice for one goal for — Adam Gaudette’s, in which Juolevi didn’t play much of a role — and one goal against, which was largely the fault of consecutive miscues from Juolevi and partner Tyler Myers. While he still has issues with turning speed, as that sequence put on display, he’s also shown an immense amount of intelligence and poise on the ice, and those qualities have thus far helped him to work around his deficiencies.
Advertisement
Ad
Advertisement
Ad

Said intelligence and poise have also been on display in a number of sharp passes and zone exits. Those haven’t translated into any goals and assists quite yet, but they will. And until they do, if Juolevi can continue to skate safe minutes, minimize mistakes, and maximize shot attempts aimed at the opposition goal when he’s on the ice, it’ll be more than enough to justify his spot in the lineup, because it’s already a major upgrade on those defenders he’s replaced.
And for a player who’s been labeled as a disappointment since being drafted 5th overall in 2016, “good enough” is an important step forward; though hopefully it’s not the last one Juolevi takes in 2021.
Advertisement
Ad
Advertisement
Ad