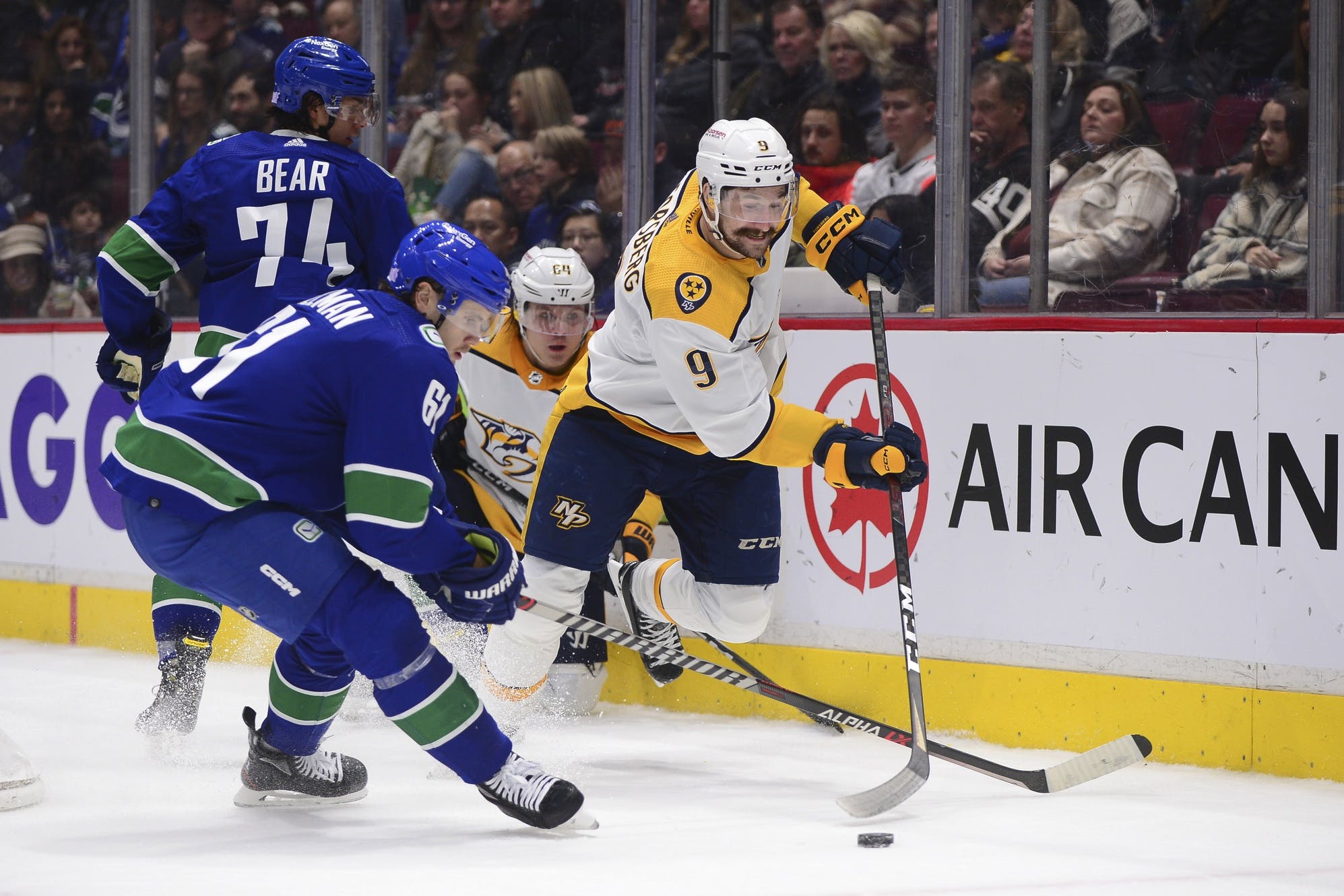 Photo credit: Anne-Marie Sorvin-USA TODAY Sports
By Michael Liu
2 months ago
Comments
Welcome to The Statsies, brought to you by NHL Lines site Betway!
That one sucked.
The Vancouver Canucks blew their 5th multi-goal lead of the season on Saturday, dropping a 4-3 shootout loss against the Nashville Predators after leading 3-0 in the first.
Everything started off so promising, with the Canucks looking like they figured something out in the 8-5 win over the Ducks. However, that wasn’t the case, and the roller coaster ride has unfortunately continued.
Here’s how the game was shaped by the numbers.
As always, you can find our glossary guide of advanced stats here.

The first two periods were the best two frames the Canucks have strung together all season. They were consistently outchancing, outpossessing, and outplaying the Predators. In the first period alone, Vancouver stacked up a 68.75 CF% with 8 high danger chances, giving up only 2 HDCA. Their ability to generate and convert chances in the opening frame tapered off slightly into the second, but not by much.
Advertisement
Ad
Advertisement
Ad
However, once again in the third period, the Canucks managed to find a way to do nothing to build off their solid foundation. Their xGF dropped 0.55 in the third period after an excellent second, paving the way for the Predators to find their way back into the game. The third also marked a drop in CF% (40.00), HDCF% (41.67), and xGF% (26.01).
Overtime wasn’t much better, with the Canucks unable to change the momentum to their favour. 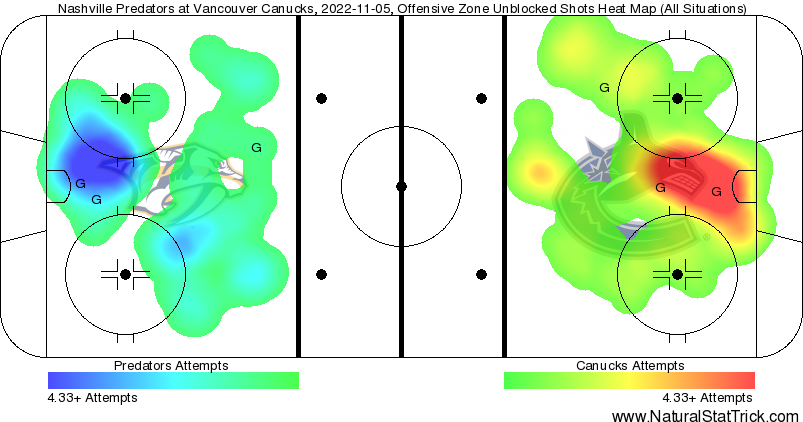 This heat map is par for the course for the Vancouver Canucks, and something that isn’t entirely the worst. Defensively, they conceded quite a lot of high-danger chances in the right slot area. However, this doesn’t necessarily mean that they didn’t defend well — rather, Vancouver just didn’t prevent Nashville from getting to their spots.
Advertisement
Ad
Advertisement
Ad
On the other hand, the Canucks were also able to have their way in the slot, with a large red patch indicating they were able to work their attempts into those areas with good frequency. Vancouver got the types of chances they wanted, and the numbers show that they did so — for two periods. The third period and overtime that followed accounted for 6 out of 23 high-danger chances that the Canucks were able to generate.

Corsi Champ: For once, it’s not Andrei Kuzmenko. Rather, the winning of this game’s Corsi title is surprising Sheldon Dries. Playing 12:07 against Nashville, Dries recorded a CF% of 71.43, leading his team through a CF% rel of +25.43. He also recorded an xGF of 1.93 and an xGF% of 73.93, which were a function of solid defensive numbers and good offensive ones. Generally, Dries held his own as a depth forward.
Advertisement
Ad
Advertisement
Ad

A shoutout does have to go Oliver Ekman-Larsson’s way. The defenceman had been struggling as of late, but this game seemed to have brought out some vintage OEL qualities. In 23:37 TOI, he posted the second-best CF% on the roster (64.71), finishing tied for first in scoring chances against for defencemen (8) and second amongst defencemen in xGA (0.78). After a rough night together, OEL put up a good performance alongside Ethan Bear with some solid advanced stats.
Corsi Chump: To no one’s surprise, this game’s worst Corsi man is Riley Stillman. The defenceman had been looking rough around the edges as of late, playing a lot harder minutes than he had been used to. That’s resulted in quite a number of ugly moments as Stillman can’t quite keep his head above water. He finished with a team-worst 26.09 CF%, putting him at -31.06 in CF% rel. That lack of puck possession caused Stillman to post the second-worst xGA (1.32) and 5 HDCA.
Advertisement
Ad
Advertisement
Ad

Straight up no clue what Stillman was doing here. pic.twitter.com/9JjEMMSqJC

xGF: This game’s winner is… hang on, Ekman-Larsson? Yup, the defenceman was hands-down the most analytically effective player on the Canucks roster, not only leading the team in xGF (2.41), but also xGF% (75.56). OEL alone accounted for 13 high-danger chances for while giving up only 3 chances against. A good bounce-back game but one that Vancouver needs more of from him if they want to turn their season around.
GSAx: Thatcher Demko landed at a slightly positive 0.17 GSAx after the Preds put up an xGF of 3.17 and Demko gave up 3 goals. Again, nothing wrong with his performance, but not one that Canucks fans are used to seeing from their netminder. With a low-danger chance finding its way into the back of the net tonight, Demko has now conceded at least one LDGA in his last two starts.
Advertisement
Ad
Advertisement
Ad

Normally don't post clips with audio, but I had to here.

Like ketchup and soy sauce: A surprising combination that worked last night was the Pearson-Dries-Garland line. I was ready to see some poor analytics from this unit, but they ended up being the best line in CF% (66.67), SCF (11), and HDCF (4). If there was one aspect where they suffered though, they had the worst xGA on the team (0.68). However, somehow they managed to balance that out, being the second-best line in xGF% (-3.77). Not bad for a patchwork line.
Chaos Giraffe strikes again: Tyler Myers decided to be his usual chaotic self against Nashville – except without being too great. He led the Canucks with the worst xGA (1.33), posting the second-worst CF% at 5v5 play amongst defencemen (37.04) along with a pitiful xGF% of 29.17. Overall it wasn’t his strongest showing, and it really hurts with the lack of depth on the back end.
Advertisement
Ad
Advertisement
Ad

Ilya Mikheyev: The biggest knock on Vancouver’s big free-agent acquisition was his lack of finish. With a forward-leading HDCF of 10 and an xGF of 1.45, there’s good reason why this team will want him to bury the many grade-A chances that he generates per game. For the last two games, Mikheyev has been able to bury two goals, and the Canucks will want to see more of that as the season wears on. The Kuzmenko-Pettersson-Mikheyev line wasn’t as statistically dominant as in previous games, being actually the worst line offensively at 5v5. However, there’s a lot to like about the unit, and for them to get consistent success will depend on Mikheyev burying the puck.

Can we get an Ilya Mikheyev in the chat ⬇️ pic.twitter.com/egH6n5RgHc

CF% – 51.56% HDCF% – 62.16% xGF% – 55.71%
The Canucks were buoyed by two excellent periods analytically, but couldn’t find the extra gear in the third to put this game away. Unfortunately, on this occasion, Nashville made them pay, coming from behind to steal two points on the road.
Advertisement
Ad
Advertisement
Ad
Next up, Vancouver hits the road for an east coast swing. They’ll face off against Ottawa on Tuesday.
Stats provided by naturalstattrick.com