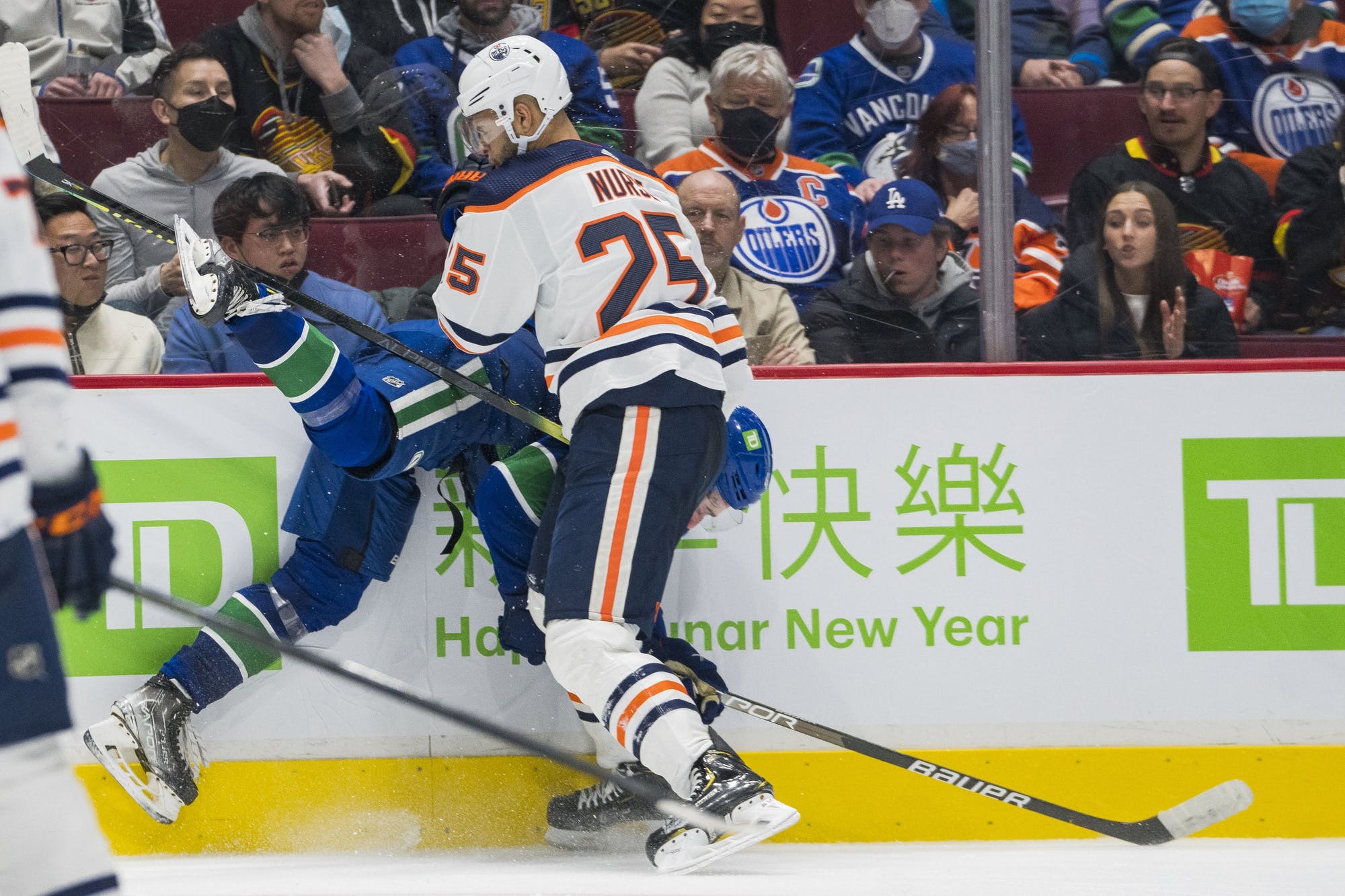 Photo credit: © Bob Frid-USA TODAY Sports
By Stephan Roget
3 months ago
Comments
Is it any wonder the Canucks keep giving up leads in the third when they spend the first two periods of each game getting worn down physically and beaten down emotionally?
The Canucks’ lack of pushback is already a problem.
Not just a problem, but a problem that other teams seem to be aware of, and are starting to take advantage of.
And it’s at least part of the reason that they are the only winless team in the NHL through five games on the 2022/23 season.
The Minnesota Wild are just the latest opponent to test the Canucks’ mettle and find it wanting.
To say that the Wild ran roughshod over the Canucks on Thursday night would be understating things. The Canucks spent 60 minutes being physically dominated, and that’s quickly becoming a trend.
Jordan Greenway — a Wild winger who is quite large, but not exactly known as a “tough guy” — spent the first period of the game crushing Canucks like there was a four-for-one sale on bodychecks.
Advertisement
Ad
Advertisement
Ad
Within the span of about ten minutes, Greenway blindsided Andrey Kuzmenko, blasted Kyle Burroughs, folded Elias Pettersson in half, and decked Oliver Ekman-Larsson.
The Canucks didn’t even put up a lacklustre response; they simply did not respond.
The #Wild twitter crowd was loving it.

What stopped Greenway’s reign of terror? He hit so many Canucks that he wound up leaving the game with an apparent shoulder injury. He felt so comfortable throwing massive checks each shift that his body couldn’t handle it.
The Canucks aren’t even getting out of the trolley tracks, they’re laying down on them and hoping that their squished bodies will derail opposing trains. It’s combat the Zapp Brannigan way, and it’s more than a little embarrassing for a squad that started out the season talking about “unfinished business.”
Advertisement
Ad
Advertisement
Ad
Greenway’s rampage set the tone for the remainder of the game. Even after he departed, his teammates hurled themselves at the Canucks with reckless abandon.
Marcus Foligno went after both Pettersson and JT Miller in two different scrums. No response.
Joel Eriksson Ek drove a shoulder into Riley Stillman’s chin, taking the Canucks’ defender out of the game with a possible concussion. No pushback.

Our ol’ pal Ryan Hartman roughed up Pettersson once again, and unlike the playoffs of 2020, this time the Canucks didn’t even look twice at it. Hartman was so glad to get away with his bullying that he made sure to elbow Quinn Hughes in the mouth before his night was done.
Lo and behold: the Canucks put up with all that, took another lead into the third period, and blew it on route to their fifth straight loss. That some were celebrating the fact that the blown lead wasn’t a multi-goal one this time as a moral victory should tell you exactly where the team is right now, morale-wise.
Advertisement
Ad
Advertisement
Ad
And it’s not like this is the first time this has happened this year. Not by a longshot.
Most will remember the incident from opening night in which Darnell Nurse took a vengeful cheapshot on Burroughs, blindsiding him in the corner after Burroughs had already been hit by another Oilers player.

Darnell Nurse has been fined $5,000 for interference on Kyle Burroughs. Thoughts🤔

The only retribution Nurse received for the hit was a two-minute minor from the refs, a power play goal against, and a $5000 fine.
Shortly after Nurse exited the box, the Oilers started putting up the five straight goals that would lead them all the way to a 5-3 comeback victory. The Canucks looked deflated. Or, to be more accurate, they looked beat up.
John Tortorella and the Flyers outhit the Canucks on the way to another from-behind win.
Advertisement
Ad
Advertisement
Ad
Same goes for the Washington Capitals in the next matchup. That game featured a sequence oddly reminiscent of the Nurse hit. This time around, it was Evgeny Kuznetsov slashing Burroughs (again!) in the mouth and then crosschecking him in the back for good measure after Burroughs had fell to the ice, clutching his face.

Kuznetsov needs a suspension for this. Blatant swing of his stick at the face of Burroughs. pic.twitter.com/K7jTL6c7X2

Once again, the Canucks’ only response was a power play goal on the ensuing minor, putting themselves up 4-2.
Once again, the Capitals stormed back immediately thereafter, piling up four straight goals to put the Canucks down and out.
At least the league felt bad enough for the Canucks in this case to hand Kuznetsov a one-game suspension.
This sort of thing was even an issue back in the preseason, where players like Markus Niemelainen (who?!) were allowed to hammer players like Pettersson from behind with only the barest whisper of a pushback from the Canucks.
Advertisement
Ad
Advertisement
Ad

Markus Niemeläinen with a dirty hit from behind on Elias Pettersson against the boards. Pearson, Kuzmenko and Horvat jump to the aid of their teammate. #Canucks pic.twitter.com/mnnjGsAfoB

That’s in preseason, where the excuse of “being disciplined in the face of physical punishment to win games” doesn’t really apply.
Not that it really applies to the Canucks in the regular season, either. Because they ain’t wining games.
It’s one thing to turn the other cheek as you cruise to victory. It’s another altogether to take your lumps on the scoreboard and the regular boards at the same damn time. The latter is about as demoralizing as hockey can get. The Canucks are getting bullied on a nightly basis, and instead of sticking together and sticking up for one another, they’re falling apart.