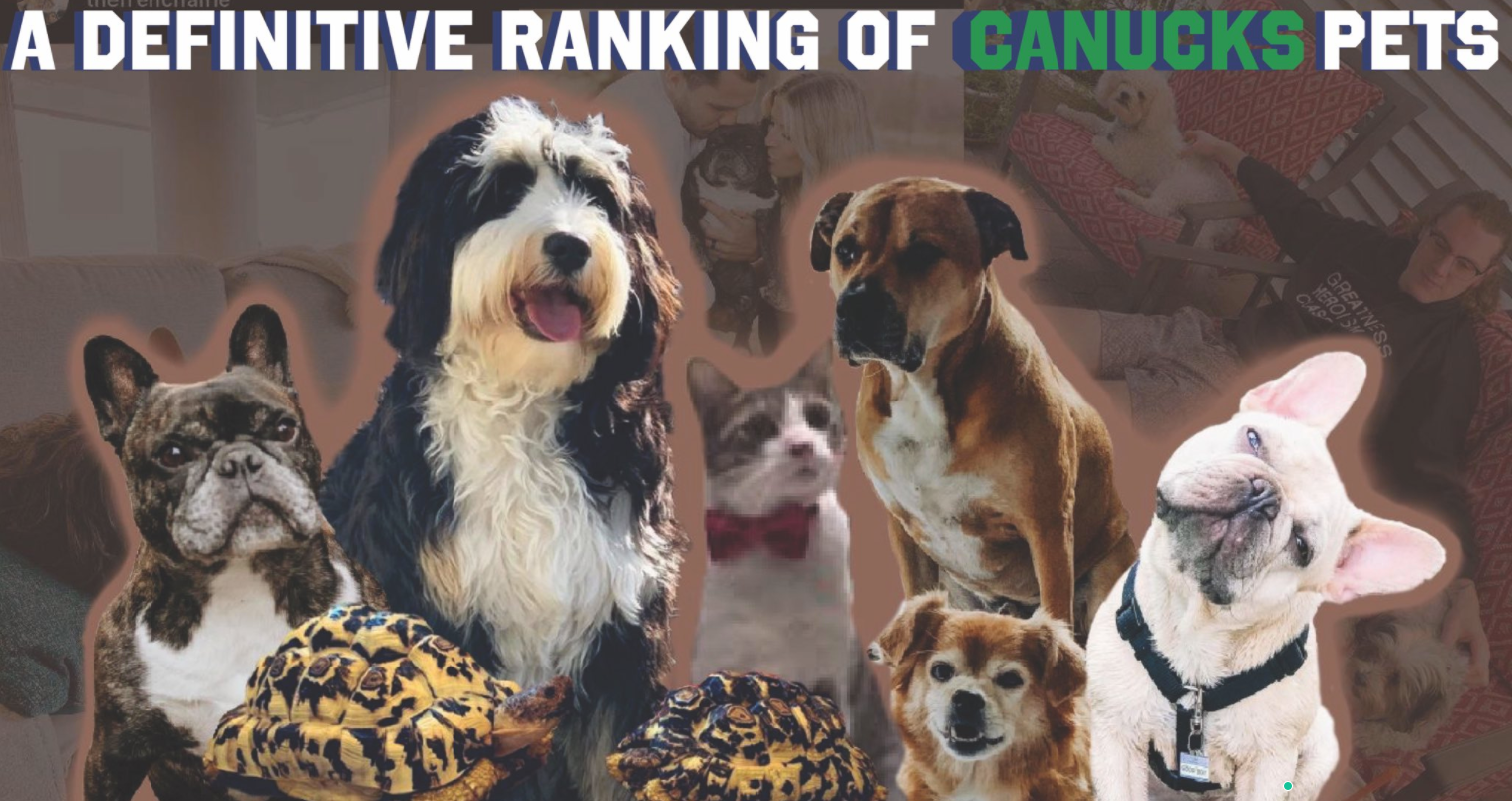 I know the sadness and disappointment that comes with players leaving teams is due to the attachment to said players or the blatant holes in the roster left by their departure, but most of my heartbreak comes from the separation of me and their pets.
Phoebe, former Canucks defenceman Troy Stecher’s Bernese Mountain dog; Dodger, former forward Tyler Toffoli’s Yorkie; and Riley, former defenceman Chris Tanev’s Pug, are no longer members of the Canucks. The canines are loved dearly by their owners and Canucks fans alike: Riley was literally Tanev’s first Instagram post and Instagram profile photo, until he changed it recently to a photo of him with Riley sleeping in his lap. A fan’s mother painted an impressive portrait of Phoebe that resulted in a meet-and-greet with an appreciative Stetcher last year.
Fortunately, remaining Canucks players and new additions continue to post pet content during the offseason as consolation. As shown, most of the team would consider themselves a ‘dog person’, but there are a few wild cards.
Here’s an updated and definitive (…not really) ranking of Canucks pets:

The newest Canucks defenceman has a few photos with two small, black dogs on Instagram. They’re even in his Twitter header photo, but I can’t confirm their names, breeds nor whether they’re his own. I’ll need further interrogation by Canucks media next season for my sanity.
Advertisement
Ad
Advertisement
Ad

The only cat owner known on the current Canucks roster is none other than Antoine Roussel. His feline is named Minou and probably speaks French like her owner, since her name directly translates to Kitty (thank you @richieslefteye on Twitter for pointing this out!).
Minou is also the only pet with a Twitter page (@minouthecatt), rather than the typical Instagram or modern TikTok account, though it’s been dormant. Either way, there’s something highly amusing about Minou’s Pinned Tweet, which reads “Love me father @Rous_ant.”

Announced as the winner of the Canucks Top Dog Race earlier this year, Emma is a rescue who was abandoned in Kitchener-Waterloo and was initially scared of people. The German Shepard-Collie mix warmed up to Tanner Pearson and his wife Meaghan, became familiar with their son Tucker, and is probably very excited to meet an incoming Pearson member soon.

Easton and Lincoln were raised by LW J.T. Miller and his wife Natalie before they were married and since the dogs were puppies. The Yellow and Red Fox Labradors are also known as Miller’s daughters Scottlyn and Scarlett’s ‘bodyguards’, which is simply adorable.
Advertisement
Ad
Advertisement
Ad

Defenceman Jordie Benn owns two adorable rescues named Juice, a Pitbull; and Lilli, a King Charles Spaniel. With the addition of Benn’s newborn baby Billie in July this year, I look forward to more dog and baby content on their shared Instagram page @bennsbuddies. Especially after they went all out on Halloween in some ferocious outfits with a Tiger King-themed family costume.

The absolute cutest on this list goes to Sasha, a micro-mini Irish Doodle belonging to LW Tyler Motte. Posting a few photos at the start of the COVID-19 pandemic in May, Motte made the right choice bringing in a puppy to keep him company.
If Tyler or his girlfriend Adriana see this, please make an Instagram account for Sasha. (Shoutout to the Broadscast Pod for unearthing this very important information.)

Though they don’t an Instagram account, Stella and Zeus Gaudette are easily the best Canucks dogs on TikTok.
Advertisement
Ad
Advertisement
Ad
Adam Gaudette and his wife Micaela have recently taken to the popular app with the handle @gaudsquad, posting funny videos of themselves and their adorable, floofy friends. After watching the video above, one of many Stella and Zeus TikToks, in which the Gaudettes attempt to train Stella and Zeus for the next Canucks Top Dog Race, I don’t think they can beat reigning champ Emma Pearson, but they are hilariously adorable to watch regardless.

Onto Canucks goaltender Thatcher Demko and his girlfriend Lexie, who evidently love their Australian Bernedoodle Delilah. Self-proclaimed ‘Fashion Model’ in her Instagram bio (@delilah.dem.doodle), I can safely agree that the fluffy pooch has posing skills.

One of two French Bulldogs on this list, with the best full name of Alfred Harrington according to his Instagram bio (@thefrenchalfie), Alfie is a 4-time pneumonia survivor and is living with a hernia. RW Zack MacEwan and his girlfriend Lindsay regularly post videos cuddling with his owners in their Vancouver apartment. And, in my humble, subjective opinion, Alfie has the most aesthetic IG layout of all.
Side note: after Alfie responded to this article and my weak heart couldn’t resist his sad face, I’ve decided to amend his ranking. It’s what he deserves. (re: “Definitive” Ranking…)
Advertisement
Ad
Advertisement
Ad

Next up: Brock Boeser’s Coola, known for his beautiful right blue/left brown eyes, was brought back home after he “stole [Brock’s] heart” at the 2018 Honda NHL All-Star Weekend, and Milo, a recent, lovable pickup earlier this year.
Although I can count on consistent ball-throwing and retrieving clips on Boeser’s Instagram stories, the Canucks forward also jumped on the TikTok train like the Gaudettes (@bboeser). His first upload was a funny clip of Coola and Milo running into each other with the trending ‘oh no’ sound bite. I expect more canine content to come! (And, not to chirp, but I hope Boeser upgrades his phone in the meantime for more quality videos.)

why r the horvats so good at funny instagram story sequences pic.twitter.com/zSntI484ZN

Being the pet of the Canucks Captain, I can firmly state that Gus exceeds expectations every time he posts on Instagram (@gus.frenchie_).
The French Bulldog currently leads in followers compared to other pets on this list at 11.1K thanks to Bo and his wife Holly’s known appreciation for their silly companion. Whether it’s accidentally getting hurt while exercising with Bo’s electric bike or posing stoic with adorable newborn Gunnar, Gus reigns champion in the dog category.
Advertisement
Ad
Advertisement
Ad

How could I not give the top spot to newly-acquired Canucks goaltender Braden Holtby’s adorable tortoises after their apparent hold-up at the US border earlier this month?
Brandi, Holtby’s wife, posted on Twitter asking for help with export papers when the family was presumably moving to Vancouver. After stating that Braden was “stuck at the border with two tortoises”, which was new information to many Vancouver fans, it became a viral incident on sports news and social media and incited many ‘slow’ jokes about whether he’ll make it in time for training camp. Maple and Honey win most uncommon pet, and have the sweetest names by far.