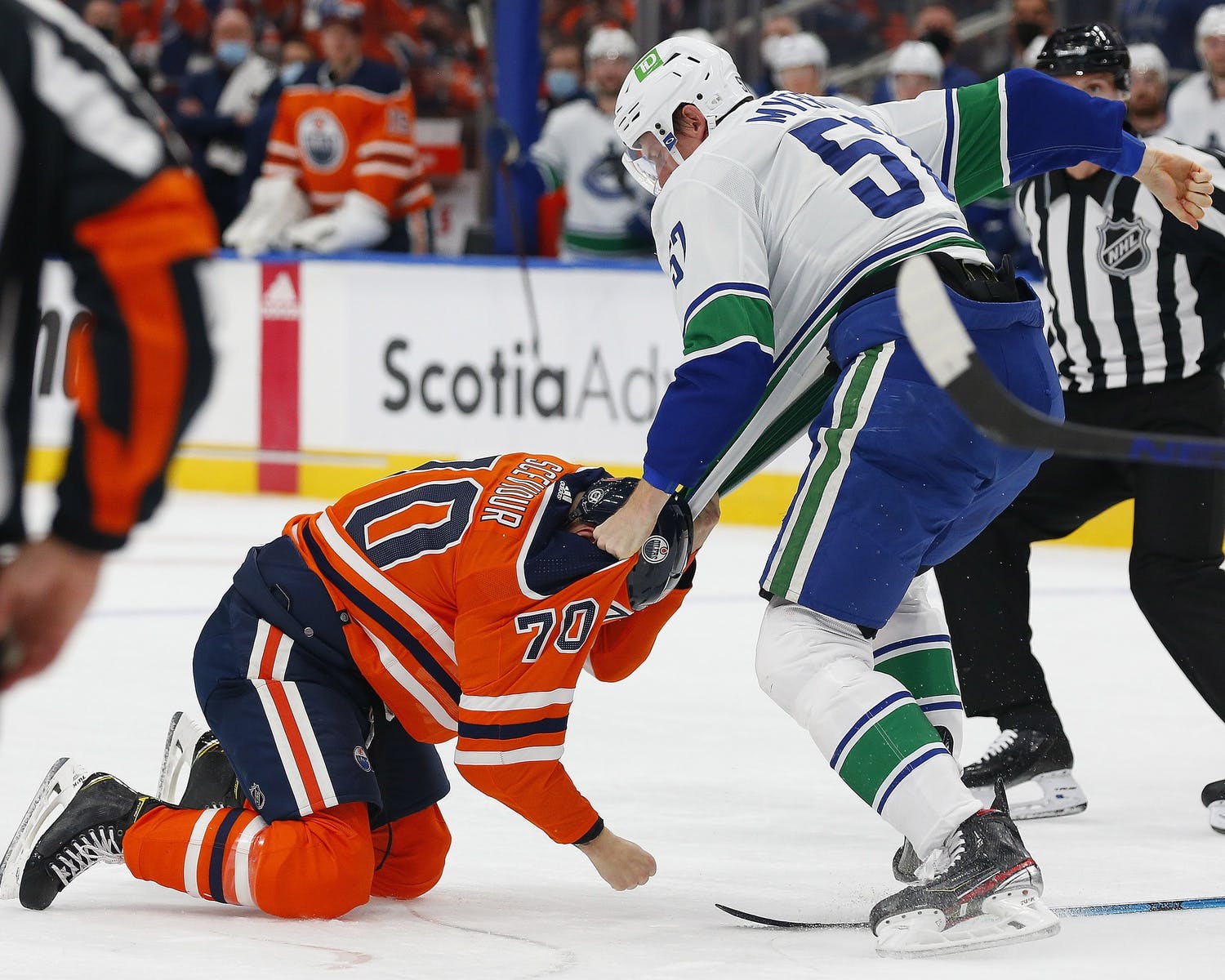 Photo credit: © Perry Nelson-USA TODAY Sports
By Stephan Roget
1 year ago
Comments
‘Twas the night of the Vancouver Canucks’ 2021/22 season opener, at approximately the 13:10 mark of the second period, and all through the fanbase, no one was making much noise.
And then, it happened.
Playing in his first game for the Edmonton Oilers, 38-year-old defender Duncan Keith played the puck in the corner to the left of Mike Smith, and looked up-ice as he did — just in time to see the 6’8” Tyler Myers, who’d traveled all the way in from the blueline with a full head of steam to deliver a check so mighty that even Keith’s vaunted immune system couldn’t fight it off.

Myers with a hit on Keith. Daniel Sedin is smiling somewhere right now 🤷

The collision was devastating, but entirely clean. Myers stooped low to drop his shoulder into Keith’s, sending the future Hall-of-Famer careening into the end-boards face-first.
By the time Keith got to his feet, Myers had already been challenged by — and rag-dolled — Colton Sceviour.

Tyler Myers annihilates Duncan Keith and then answers the bell by dropping the gloves #Canucks pic.twitter.com/Ut40dCmv1e

A bloodied Keith skated off to the locker room, though he would return after getting cleaned up.
Advertisement
Ad
Advertisement
Ad
The incident obviously generated a fair bit of noise in the arena. But another sound could be heard rippling across British Columbia: a sigh of catharsis nearly a decade in the making.
Let’s rewind to March 21, 2012, about five months short of a full ten years ago.
In an image likely burned into the minds of anyone who cheered for Vancouver at the time, the very same Keith caught Daniel Sedin in the neutral zone with the dirtiest elbow in Canucks history this side of Bure-on-Churla.
The consequences were quick to follow. Keith was suspended for five games, returning in time for the 2012 postseason. Daniel, on the other hand, returned to the game after a brief absence, but was diagnosed with a severe concussion thereafter. He wound up missing the remainder of the regular season and the first three games of the playoffs as the Canucks fell in five games to the Los Angeles Kings, a disappointing finish for the reigning Western Conference Champs.
Advertisement
Ad
Advertisement
Ad
The concussion marked a clear shift in productivity for Daniel. The year prior, he’d led the league in scoring with 104 points in 82 games. He’d finish 2011/12 with a respectable 67 points in 72 games, drop to 40 in 47 for 2012/13 with the lingering effects of the concussion still affecting him, and then all the way down to 47 in 73 the following year.
A rebound would occur in 2014/15, but Daniel would never again approach the scoring heights of his Art Ross season.
For many, the Keith elbow also marked the effective end of a Canucks era, and the definitive closing of that particular competitive window. Without Daniel, the Canucks were easy pickings for the Kings in the first round of 2012, despite coming in as the number one seed. They slipped in the standings the following year before being swept by the San Jose Sharks in the opening round of 2013.
Advertisement
Ad
Advertisement
Ad
By the end of 2013/14, the Canucks were out of the playoffs, Mike Gillis was fired, and the Age of Benning had begun.
But those were all consequences faced by the Canucks, their players, and their fans. Keith, the one who actually delivered the elbow that led to all that, never really faced much in the way of repercussions for his actions, aside from a paltry five-game vacation.
No Canuck went after Keith in that game, or in any of the games that followed. Not that year, not the next year, and not the year after that. Retribution was never attempted or even seriously sought after.
The fans didn’t let Keith off the hook, as evidenced by the lustful booing aimed at Keith whenever he touches in the puck in Rogers Arena. But aside from that, he more-or-less got away with maiming Sedin, and that’s an injustice that has remained stuck in the craw of many Canucks fans ever since.
Advertisement
Ad
Advertisement
Ad
We’ll peel back a moment here to mention that there’s pretty much zero chance that Myers was thinking of all this as he stormed in from the blueline to destroy Keith. Love him or lump him, Myers is not someone who plays the game with an exceptional amount of foresight. He probably saw an opportunity to step up for a big hit and shift the momentum of the game a bit, and he took it, just so happening to target the opponent who most deserved it.
Myers didn’t set out to become a Lower Mainland folk hero, it just happened.

Nor are we suggesting that the check had much of an impact on anything other than the end-boards and Keith’s face. The Canucks didn’t score on the power play that ensured from Sceviour’s instigator penalty, and the Oilers went ahead 2-0 a few minutes later. The Canucks would eventually come back to tie it 2-2 and send things to a shootout, but that came more than a period after the Myers hit. The collision may have sparked the team for a minute or two, but it didn’t exactly re-fill their stamina meters, EA Sports-style.
Advertisement
Ad
Advertisement
Ad
And we definitely wouldn’t go as far as to say that the incident was something that Daniel, or his brother Henrik, got any level of satisfaction or enjoyment out of. That sort of stuff is simply not the Sedins’ bag. We all know that Daniel forgave Keith long, long ago. If anything, Daniel’s immediate thoughts when the hit happened were of concern for Keith’s own health. He’s just that kind of guy.
But we can’t all be Daniel Sedin. If we were, the Sedins wouldn’t be so special. But they are true paragons of patience, grace, and clemency. The rest of us ordinary human beings, however, are not.
Vancouver fans have never even considered forgiving Keith for the elbow. The boos still rain down on him from the rafters of Rogers Arena as loudly as ever before, and they’re not stopping anytime soon.
Advertisement
Ad
Advertisement
Ad
Whether they want to admit it or not, most Canucks fans have been waiting for Keith to get his for quite a while.
And on Wednesday night, Keith got his, and he got it clean, and he got it hard.
It felt good. It felt right. It felt like…justice.
From a pure hockey perspective, it’s a play that will likely be forgotten by the time the puck drops on the next regular season game. The Canucks did, after all, lose to the Oilers, and most of their focus will be on turning things around before they face the Philadelphia Flyers on Friday.
But there’s another perspective worth viewing this through.
Wednesday night marked the premiere of the latest season of this series we call the Saga of the Vancouver Canucks. To wrap up a decade-long dangling plot thread in the very first episode of 2021/22, and in such satisfying and visceral fashion? That’s just good television.
Advertisement
Ad
Advertisement
Ad
One hopes that, if anything, the Devastation of Duncan Keith is an omen of more positive storylines to come as the season progresses.
Either way, it’s a hell of a start to the Tyler Myers redemption arc.