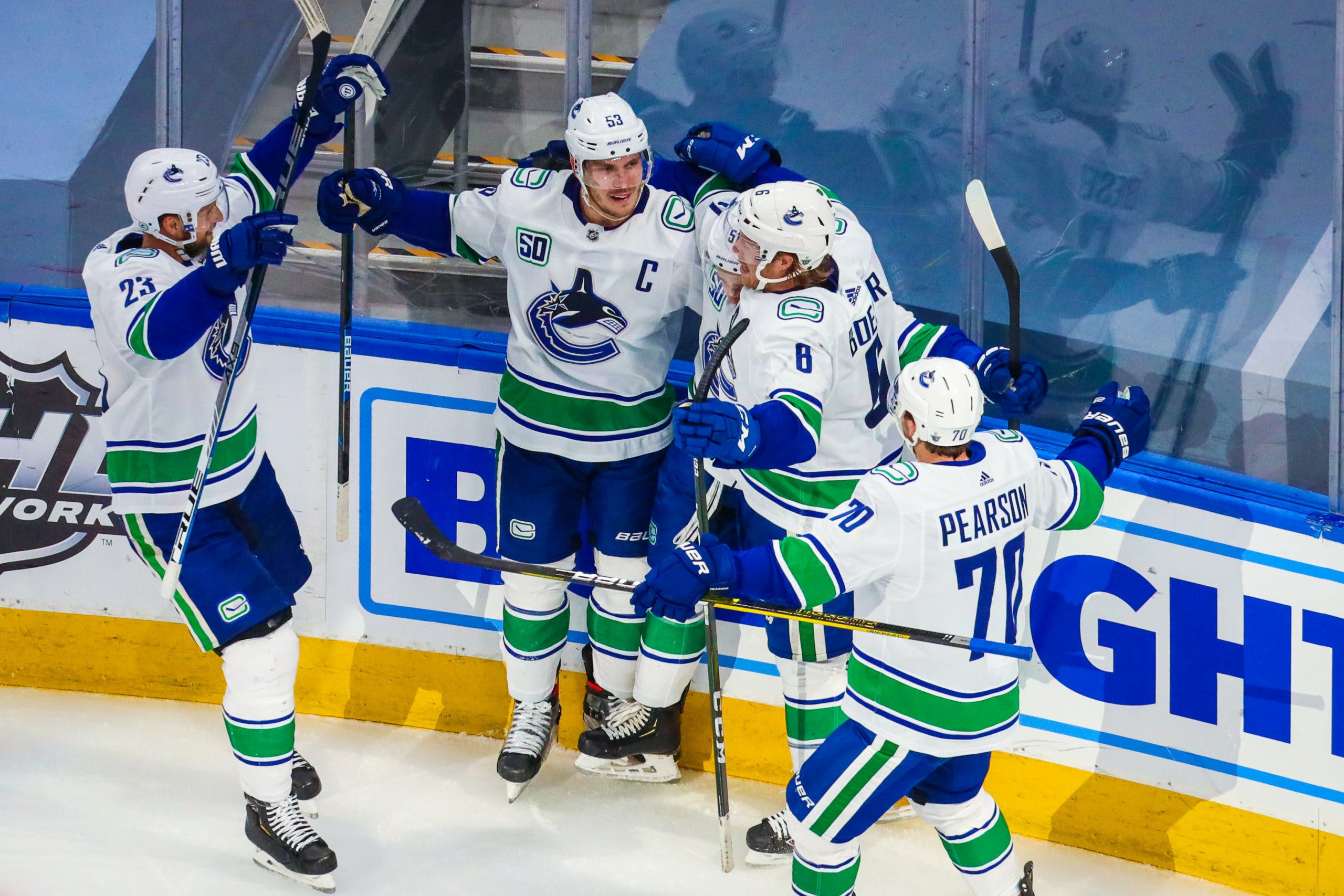 Photo credit: Sergei Belski-USA TODAY Sports
By Jason Jhutti
2 years ago
The great Ben E. King once said, oh, I won’t be afraid just as long as you stand, stand by me.
The 2019-20 Vancouver Canucks are a tight-knit group who stand by each other. They play hard for one another on the ice, but more importantly, they’re there for each other where it matters the most. Life.

Nearly six minutes into the third period of game one against the St. Louis Blues was a moment Troy Stecher will never forget. He scored a goal — the first playoff goal of his NHL career, which was also a game-winner for his childhood team — but it was different. This was the first time he has scored a goal since his father Peter passed away during the NHL’s pause.
Advertisement
Ad
Advertisement
Ad
Emotions running high, the celebration was magical.

It meant a lot to the entire group.

Bo Horvat got choked up and had to cut his comment short when talking about Troy Stecher's goal last night. Like I said, the guys really care for each other in that room https://t.co/PrOSlPBpvh pic.twitter.com/6xoG6UnRU4

“It’s been tough, obviously, at certain moments throughout this process, but I’m thankful to be surrounded by my teammates,” Stecher told reporters after the game.
Advertisement
Ad
Advertisement
Ad
The team has been through a lot his year as both Jacob Markstrom, and Zack McEwen lost their fathers as well.
“I know what he’s going through,” Markstrom said of Stecher. “It’s not easy… I got emotional as well thinking about it. I gave him a big hug after the game.”
The Canucks are close. They have a family mentality that gives them the edge over a few teams, which could be huge in the years to come.

Advertisement
Ad
Advertisement
Ad
Brock Boeser remained with his ill father in Minnesota as he awaited a new contract as training camp got underway. As soon as he signed and stepped into the rink it was a hug-fest. Boeser’s teammates were well aware of the major health scare Boeser and his family went through that summer when a blood clot caused by his lung cancer, which he was diagnosed with in 2017, resulted in heart failure for Boeser’s father, Duke.

.@BBoeser16 touched down in Vancouver late Tuesday and was reunited with @BoHorvat this morning. #Bromance pic.twitter.com/xYUUDbQSDt

Before the regular season, the team was told that Bo Horvat would be named the team captain, which has been vacant since Henrik Sedin retired. Considering most of the players have been calling him “cap” long before it was made official, it likely didn’t come as much of a surprise to them, but the boys still couldn’t have been more thrilled for Bo.
Advertisement
Ad
Advertisement
Ad
The core of the team stays together whenever possible, watching movies, playing N64, or trying to get one another to watch Gossip Girl.
Especially now with social media, we can see how close these guys are. The players are often seen tagging each other in posts and stories, and posting videos of their off-ice shenanigans when with one another.

This could be the closest group this franchise has ever seen, despite not making it to the finals yet.
The reaction that the team ‘dad’ got after his series-winning overtime goal to send the Canucks to the playoffs was outstanding.
Advertisement
Ad
Advertisement
Ad

With team camaraderie at a high and the genuine care for one another, it’s easy to cheer for them even if you don’t like Vancouver. This team has been battle-tested the entire year and they have the making of doing something special — something this city has never seen before — and it starts and ends with family.