Advertisement
Ad
The Statsies: A second period meltdown and not much pushback results in a classic Canucks loss 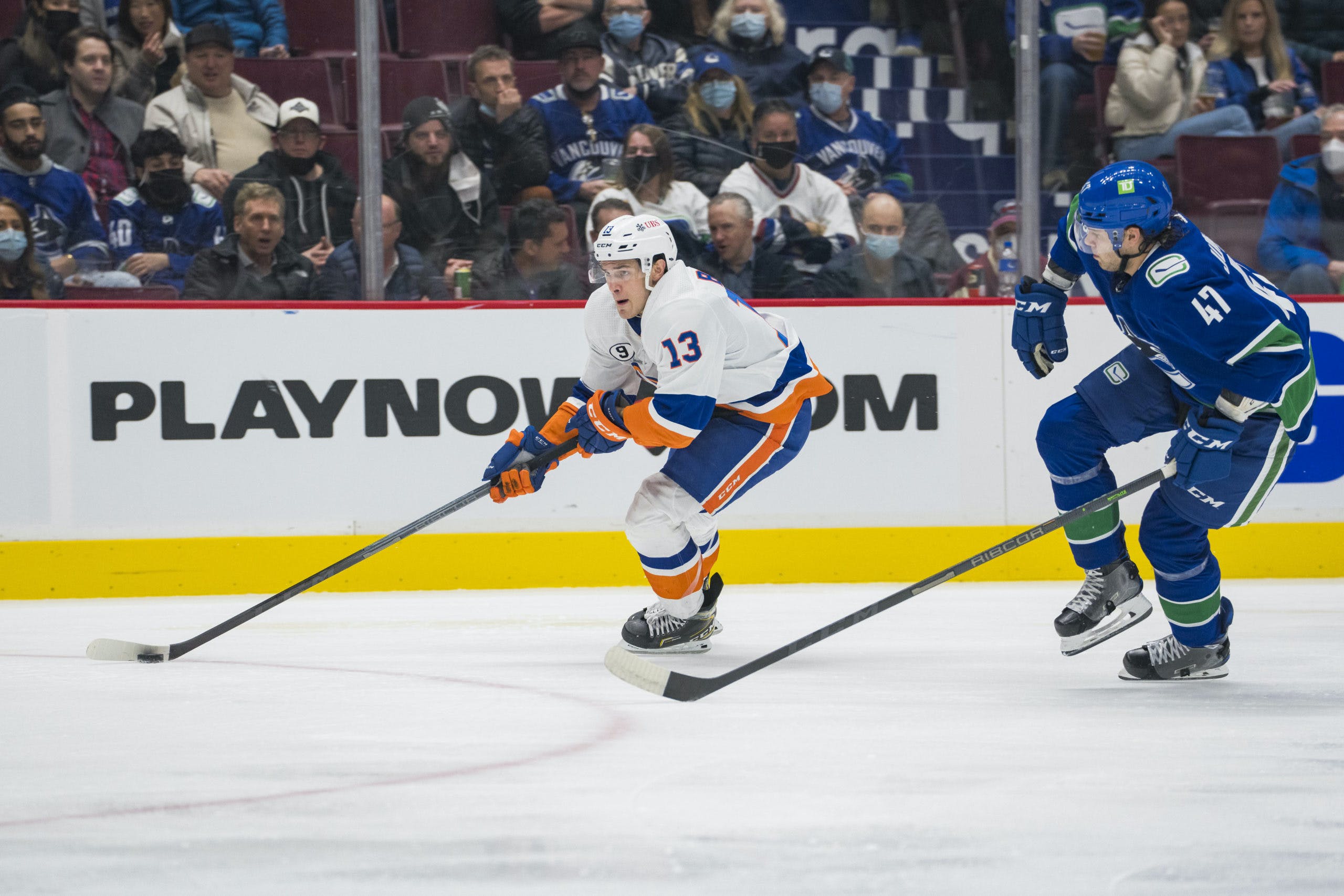 Photo credit: © Bob Frid-USA TODAY Sports
By Michael Liu
22 days ago
Comments
Be sure to check out NHL betting odds site Betway for the latest Canucks game day odds!
At this point, we should just expect the worst of this team, regardless of how promising things look.

Putting this on the TL for absolutely no reason. Nope. Noooo reason at all. #Canucks https://t.co/3zKd2eqbRX

The Vancouver Canucks returned home to take on the New York Islanders, and after the first period, it looked like they planned on changing the narrative. Instead, this 6-2 loss against the visitors served to reinforce much of what everyone knows about this team. Not good enough to compete; not bad enough to tank. The dilemma that the Canucks find themselves in on the ice mirrors the limbo that faces them off the ice. There’s a lot to unpack from last night’s contest.
Here’s the loss, by the numbers.
As always, you can find our glossary guide of advanced stats here.

For the first 20 minutes, Vancouver looked incredible. The pressure that they were able to generate seemed to have the Islanders on their heels, dominating both puck possession and chances to go up 1-0 after the first. The Canucks controlled a 73.81 CF%, recording 31 CF through the opening frame, as well as a 16-8 scoring chance advantage. It converted to a 59.77 xGF% share for Vancouver, a margin that they deserved thanks to puck retention and aggressive play. However, New York showed that they could weather a storm, and escaped the first only trailing by one.
Advertisement
Ad
Advertisement
Ad
Like in the Jets game, the first intermission killed any momentum that the Canucks created. The second period was a disasterclass, something more fitting for a torture movie than public entertainment. The CF% had the Isles slightly ahead of the Canucks here (56.76 CF%), but what really stands out is their xGF. New York created 14 scoring chances, 9 of which were high-danger, racking up a massive 2.16 xGF in just the second period alone. Sure, the Canucks got 6 scoring chances, but with only 3 being high-danger, they got left in the dust with a 0.81 xGF to their names. Again, the team felt like it was missing a gear, and as soon as they faced stiff opposition, they folded. After the 31 CF performance in the first period, Vancouver would only total 29 CF through the second and third.
Advertisement
Ad
Advertisement
Ad 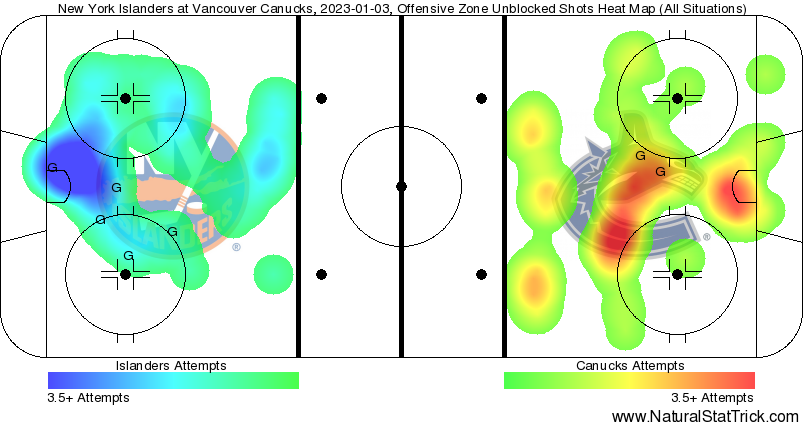 How many times will this team continue to bleed chances in front of their own net? Apparently more times than they would care to learn from. Against the Islanders, the Canucks once again saw themselves giving up a concentrated hotspot of chances in front of their own net. 12 out of the 15 high-danger chances New York had came at 5v5 play, further showing the disparity in where and when the Isles got their opportunities.
Meanwhile, Vancouver didn’t get much of note offensively for themselves. Sure, there was the isolated spot in the high slot and down low, but relative to the Islanders, it’s sparse and separated. Another big difference is that those small hot spots grow smaller when looking at the 5v5 difference. While this is an indicator that the power play is doing its job, what it also shows is that the Canucks continue to be simply not good enough at even strength play.
Advertisement
Ad
Advertisement
Ad

Corsi Champ: Sheldon Dries struggled in his first couple games up with the big club, but has been putting it together as lately. In this one, Dries led all Canucks in CF%, tacking on a 78.57 CF% share in the 12:00 minutes he had. It was a solid outing, where he found himself shifted to the wing alongside JT Miller and Conor Garland and didn’t miss a beat after a good game against Calgary. It probably helped Dries’ numbers to play mostly against the second and third lines too, but credit where credit is due here.
Corsi Chump: Hoo boy. A decent game against Calgary for Tyler Myers is immediately followed up by potentially the worst game of his NHL career. Last night against the Isles, the defenceman was the worst Canuck in CF%, a 34.48 putting him at a -34.01 CF% rel to his teammates. With putrid decision making and giveaways, Myers also was the worst Canuck in xGA (1.64), ending the game with a team-worst 17.39 xGF%. He was on the ice for 13 scoring chances against, of which 7 were recorded as high-danger. Overall, Myers was nothing short of a liability.
Advertisement
Ad
Advertisement
Ad

Myers and Miller are playing the long game and gunning for Bedard, we've had it all wrong. How else do you explain this pass from CG57: pic.twitter.com/0uNQ0tPFrC

xGF: To go along with the champ title, Dries also managed to be the best xGF man the Canucks had last night. His 71.54 was comfortably ahead of Lane Pederson’s 61.32, standing at a 32.13 xGF% rel to the team average. It helps that Dries didn’t concede a single high-danger chance against, while managing to record two of his very own. The points and goals didn’t come from Dries last night, but his good play should be recognized regardless.
GSAx: It wasn’t like Spencer Martin had much help last night, but he also wasn’t at his finest. With New York putting 5 goals past him at 3.35 xGF rate, Martin’s total GSAx works out to a -1.65. Contributing to this are the two middle danger goals that he gave up, the other three coming off high danger shots. Still, for the first period at least, Martin was matching Ilya Sorokin save for save. Unfortunately for him, his team couldn’t give him much help offensively or defensively.
Advertisement
Ad
Advertisement
Ad

Where the third line makes the most of it: Expanding on an earlier point, Dries-Miller-Garland was the best Canucks line at 5v5 play. They did get the third-most ice time while also seeing some favourable matchups, but in a 6-2 loss, they managed to look decent. This unit led Vancouver in CF% (90.00), xGF% (83.59), and HDCF% (100.00), which does come in limited minutes, but should still be encouraging to see. In a game where the effort looked lacking and the result fitting, Dries-Miller-Garland stood out in a positive way.

Credit to JT Miller for a strong period.

His line with Garland and Dries has a 100% Corsi and Miller was 5-1 in the face-off dot.

I've been as vocal as any with my dislike of his game recently, but you gotta hand it to him, he had a strong first. #Canucks

Any guesses on the second-worst Canuck in xGA?: One might guess this would be Oliver Ekman-Larsson, as the defensive partner to Tyler Myers. However, that wouldn’t be the case. In fact, in a game where he scored twice, Bo Horvat gave up a 1.60 xGA. He obviously outweighed that defensive impact with the two markers that he put up, but Horvat also only recorded a 1.22 xGF, which suggests that an element to his goals could be considered “lucky.” It’s not to say that he had a bad game, but Horvat’s defensive game is something that should be critqued and worked on, especially since he wasn’t in a matchup role.
Advertisement
Ad
Advertisement
Ad

CF% – 58.82% HDCF% – 37.50% xGF% – 41.60%
Vancouver showed up on time and played excellent hockey for the first period. Unfortunately for them, the game lasted 60 minutes, in which they saw plenty of puck possession but got destroyed by mistakes and ruthless efficiency from the Islanders. It’s yet another example of this team facing some adversity and being unable to step up against it. No matter how promising things might look early, this team needs to start addressing their shortcomings and play a full game with complete effort.
The Canucks are right back in action tomorrow, with the Colorado Avalanche rolling into town.
Stats provided by naturalstattrick.com