Advertisement
Ad
The Statsies: Lack of clinical finishing almost costs the Canucks a win against the Coyotes Photo credit: © Bob Frid-USA TODAY Sports
By Michael Liu
1 month ago
Comments
Be sure to check out NHL lines site Betway for the latest Canucks game day odds!
That was a lot closer than it should’ve been. But should’ve beens have been a big storyline for the Canucks this season.
Vancouver managed to squeak out a 3-2 overtime win over the rebuilding Arizona Coyotes last night at Rogers Arena, where the biggest story of the night was Brock Boeser’s camp reportedly being given permission to seek a trade. But there was still a hockey game that happened, and one where the Canucks finally snap their two-game losing streak. Not the worst result, all things considered, but still too close to comfort against a bad Coyotes team.
Here’s the win, by the numbers.
As always, you can find our glossary guide of advanced stats here.

The Canucks actually demonstrated some pretty impressive play at times during this game. There were a few moments here and there, but for the most part, Vancouver was in the driver’s seat puck-possession-wise. That also was closely tied with their own expected goals, which also shifted in favour of the home team throughout the game. Of course, having a 5-on-3 power play will help in loading those numbers up.
Advertisement
Ad
Advertisement
Ad
However, with such an advantage, one would expect Vancouver to capitalize more. Especially against a team like Arizona, there really isn’t a valid excuse for not making good on their chances. Any other team in the league probably would’ve taken advantage of the Canucks’ lack of finish, and the Coyotes nearly did with a 2-1 lead going into the third. It’s a sign that this team needs to become a lot better at burying the chances they managed to get. 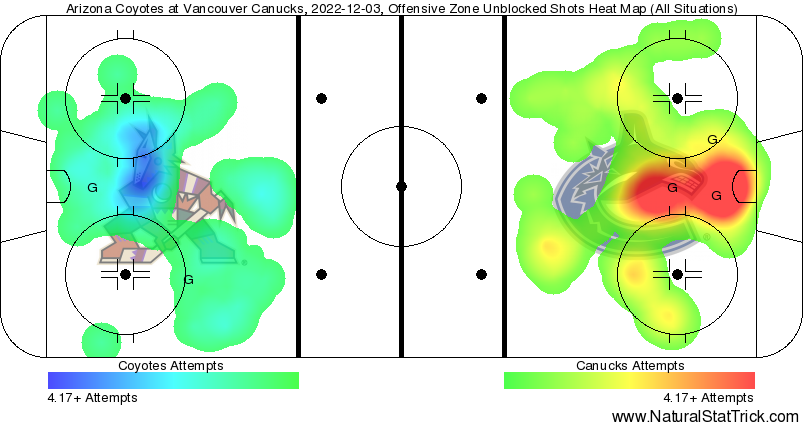 This is the type of heat map that we expected in the past two games. The Canucks absolutely dominated the Coyotes in the offensive zone, flooding the net with high-danger chances as shown by the massive red hot spot. What’s also encouraging to see is how big and dense it is, meaning that Vancouver was pretty much able to have its way with attempts from the slot. If there is one point of concern, it’s how that spot shrinks at 5v5 play. It becomes lighter and a lot smaller, which is not a great sign of the chances this team generates at 5v5 play.
Advertisement
Ad
Advertisement
Ad
On the flip side, Vancouver was great defensively. Yes, it’s Arizona, but credit to the Canucks for shutting down high-danger chances whenever they got the chance to. The Coyotes weren’t able to get much going throughout the night however, they still managed to score two goals. It’s not the best of looks, but the Canucks can take solace in the fact that it’s not a high-probability outcome normally.

Corsi Champ: JT Miller has been on a bit of a heater in this category for a while now. Against the Coyotes, he led all Canucks with an 80.77 CF% on the night which put him at a staggering 33.31 CF% rel to his teammates. Miller generated 24 scoring chances with 7 high-danger ones among them. Of course, being on the two-man advantage will help in those numbers, but Miller did turn in a solid game puck-possession-wise regardless.
Advertisement
Ad
Advertisement
Ad
Corsi Chump: Curtis Lazar earns this game’s chump moniker with a team-low 12.50 CF%. With how well this Canucks team retained puck possession, Lazar ended up finishing with a -59.08 CF% rel to his teammates, meaning that the Coyotes controlled the puck almost 60% more than usual when he was on ice against them. Lazar gave up 5 scoring chances, though none of them were considered high-danger. Interestingly enough though, Lazar was on ice the most against Clayton Keller and Nick Schmaltz, Arizona’s first line, suggesting that the matchup role yielded decent results.

xGF: It really shouldn’t be a surprise here, but JT Miller also claimed this game’s xGF award with a team-leading 87.39, just edging out Elias Pettersson’s 87.38. Miller’s 2.52 xGF was good enough for third in the lineup, while his 0.36 xGA was the fourth-least. It’s not only a credit to the sheer amount of chances that Miller was on ice for, but also the fact that he didn’t give up a single high-danger chance against, helping drive those xGA numbers down. A shoutout does go to Pettersson for finishing so closely behind, as well as Quinn Hughes for leading Vancouver with a raw 3.07 xGF.
Advertisement
Ad
Advertisement
Ad
GSAx: This game marked the first one that Spencer Martin was the undisputed starter for, and he performed like his usual self. Through 64 minutes of hockey, Martin conceded 2 goals on a 1.97 xGA, which puts his GSAx on the night as a -0.03. It’s not an awful number to see, with Martin pretty much breaking even. At that point, GSAx was about the margins, and what did his margins in was the one low-danger chance that snuck through.

Canucks were able to tie the game because Spencer Martin made a couple huge saves in the third plus a great defensive play by Luke Schenn to break up a tap in.

Two guys brought in to play depth roles have been two of their most impactful players this season.

Brock’s statement: We all know how significant this game was for Brock Boeser, emotionally and as a Vancouver Canuck. After being a late activation from a healthy scratch, Boeser made a statement with the tying goal tonight. He lined up alongside his usual linemates of Sheldon Dries and Conor Garland, but what I want to draw attention to is the 3:54 that he spent with Pettersson and Ilya Mikheyev that generated the tying goal.
Advertisement
Ad
Advertisement
Ad
During that span, the line posted the best CF% (87.50), xGF% (92.85), SCF% (83.33), and created 3 high-danger chances. Boeser has not been clicking with Dries or Garland, so it was high time to try a different combination. His play alongside Pettersson should show that he isn’t exactly out of place just yet within this Canucks lineup, and there could yet be value to be generated from better deployment.

Bear continues to impress: Having another competent RHD in this lineup makes such a big difference. Though Ethan Bear might not pop off the stat sheet, it’s important to consider who he was playing alongside. Oliver Ekman-Larsson was statistically the worst Canucks defender last night, coming in with poor puck possession metrics and defensive stats. However, the only reason why he wasn’t any worse was because of Bear buoying him upwards. With Bear, OEL posted a CF% of 60.00, while away from Bear he posted a 37.50. OEL’s xGF% drops from 47.37 to 0.00 as soon as he’s playing away from Bear. I don’t think this is so much a reflection of OEL’s shortcomings, but more so how Bear has had a positive impact on his partner. It remains to be seen if he can keep it up during the rest of the season.
Advertisement
Ad
Advertisement
Ad
Bear made an appearance on CBC’s After Hours after the game, and you can read about that interview here.

Ethan Bear on After Hours. Please tell me you saw this segment. Must-see.

CF% – 63.06% HDCF% – 78.95% xGF% – 74.28%
The Canucks dominance on the stat sheet didn’t exactly translate to tangible results, but they managed to get two points at home in their overtime win against the Coyotes. Though it’s good to see them turn in a solid outing, it’s also important to contextualize who they were up against and what they were lacking. Vancouver will need better finishing and converting more of the opportunities they generate in order to win in this league.
Vancouver will be back in action tomorrow against the Montreal Canadiens tomorrow at home as they look to string together a couple of results.
Stats provided by naturalstattrick.com
Advertisement
Ad
Advertisement
Ad