Advertisement
Ad
The Statsies: Kuzmenko’s breakthrough on a night full of 3s in Canucks win Photo credit: © Bob Frid-USA TODAY Sports
By Michael Liu
2 months ago
Comments
Welcome to The Statsies, brought to you by NHL Lines site Betway!
The Canucks need to get Kevin Bieksa to give a pre-game speech every single game.

Once a leader, always a leader. pic.twitter.com/HRg8LCkJxZ

Yes, it’s against the fledgling Anaheim Ducks, but Vancouver’s 8-5 win was chock-full of positives to take away from this game. From the offence clicking to encouraging trends, there wasn’t much that went wrong statistically. It’s a good sign and one that the team can hopefully build off of as the season continues.
Here’s a breakdown by the numbers.
As always, you can find our glossary guide of advanced stats here.

Would you look at that, the Vancouver Canucks did not give up the momentum of the game in the third period! Jokes aside, this game flow chart doesn’t necessarily reflect the scoreline, but does provide a good indicator of how the content went. The first period deserved to be knotted up at one apiece, with both Anaheim and Vancouver trading chances and puck possession. It wasn’t until the second period that the Canucks really seized the initiative, one which they wouldn’t relinquish until the game was finished. On top of that, Vancouver even built upon their advantages to push even harder when the Ducks would score.
Advertisement
Ad
Advertisement
Ad
The biggest positive to take away is that the Canucks didn’t just cave into a defensive shell when they had the lead. Their CF% stayed relatively the same throughout the game (57.69, 56.76, 56.25), but Vancouver doubled up on Anaheim’s scoring chances (16 to 8), while also getting 10 high-danger opportunities amongst that number. It is with efforts like those that teams win games, and the Canucks xGF of 1.85 was very well earned in the final frame. 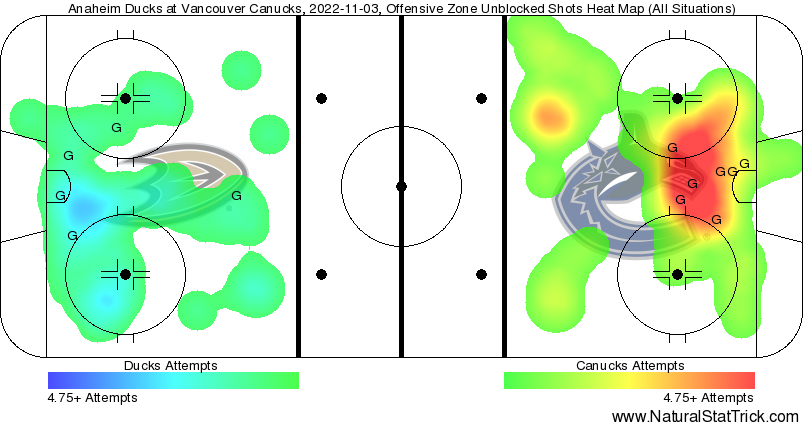 This is a fantastic heat map if you’re a Vancouver Canucks fan. Up front, all 8 goals came from high-danger areas, right where the red hot patches are in this chart. This means that not only did Vancouver get their high-danger opportunities, but converted on a number of them as well. In previous games, the Canucks were able to get their chances but lacked the finish to deliver on them. That changed in this game against the Ducks, and hopefully it is a sign of things to come.
Advertisement
Ad
Advertisement
Ad
Defensively, there’s also not much to complain about. Vancouver did a good job in suppressing Anaheim’s high-danger chances, not an easy feat when you’re giving up 30 shots in a game. That goal from the point is probably more so on Spencer Martin than the defence, since those are the types of shots that you don’t mind giving up to your opponents.

The Andrei Kuzmenko Award: Yup, as the name implies, Andrei Kuzmenko once again led the Vancouver Canucks in CF% (74.07). The advanced stat darling was also finally able to make a big impact on the scoreboard, converting his opportunities into his first NHL hat trick, as well as tallying an assist for a four-point outing. It makes sense too – Kuzmenko’s CF% rel indicated that he was 22.88% better at retaining puck possession than his teammates, which led to an xGF of 1.49 and an xGF% of 83.61, good enough for second on the team. Kuzmenko also finished with 8 HDCF, the second-highest on the Canucks.
Advertisement
Ad
Advertisement
Ad

Corsi Chump: This game’s chump is Nils Åman, which is unfortunate considering how good of a game the fourth line had. Chipping in with a goal is already huge for a line without much offensive expectation. Åman’s team-least CF% of 36.67 can’t really be explained through deployment or matchup. The majority of Åman’s shifts started in the neutral zone, while the Swede also took 7 of his 12 faceoffs in the offensive zone. His minutes on ice were also evenly split between the Ducks lineup, meaning that Åman wasn’t thrust into a matchup role. Most of the Corsi against he recorded was from Cam Fowler, who put up 10 CA against Åman.

xGF: This award is going to be a tie between two players. First up is JT Miller, who led the Canucks in xGF% (83.90). While this not only stems from a 1.42 xGF, Miller also put up an impressive xGA of 0.27 while giving up only 3 scoring chances against. This marks the best defensive performance that he has put in all season, as playing on the wing seems to have reduced his responsibilities to a manageable load. Whichever is the case, this was an excellent showing on both ends from Miller.
Advertisement
Ad
Advertisement
Ad

The other recipient here is the main star of the show tonight. Elias Pettersson was dropping dimes with his passing ability. The centreman posted a massive team-leading 1.93 xGF, easily clear of second place (1.66). Pettersson’s 5 points are joined by a team lead in scoring chances for (15) and high-danger chances for (9). The Swede was good defensively as well, yielding only one high-danger chance against for the Ducks. There really wasn’t much more to ask for, as Pettersson looks to be coming into his own this season.

Pettersson is on a mission at both ends of the ice. #Canucks pic.twitter.com/AiIu1uWFja

GSAx: This is probably going to be the most painful category of the night. Yes, Spencer Martin is still undefeated in regulation as a Vancouver Canuck. However, tonight he came real close to having that moniker slip. The Anaheim Ducks only managed to record an xGF of 2.02 across the entire game – and since Martin let in 5 goals, his numbers show a -2.98 GSAx for his efforts. This is most likely due to the low-danger shot from the point that resulted in a goal pulling the xGF down for the Ducks, but Martin didn’t exactly do himself too many favours by letting that in. Regardless, the result is the important thing.
Advertisement
Ad
Advertisement
Ad

The reverse-jinx lives on: It feels that every line I call out in the Statsies goes on to make me eat my words. The Kuzmenko-Pettersson-Mikheyev line was not only dominant analytically, but also on the scoresheet as well, putting up a combined 10 points on the night. This is what can happen when this line capitalizes on their opportunities. They had the best xGF% (79.95) and got 6 HDCF without giving up a single HDCA. Against the Ducks, this line found a finish as well as defensive excellence, which hopefully is just the first break in the dam for them.

Third period 5v5: The Canucks absolutely smothered the Ducks at 5v5 play in the third period. Vancouver saw an uptick in CF% (56.76 to 60.53), SCF% (52.94 to 71.43), and HDCF% (77.78 to 81.82). Essentially, they swung the balance of puck possession, scoring chances, and high-danger chances further in their favour. The only things that ticked downward were xGF% and xGA (78.54 to 72.11, 0.39 to 0.53), but that can be attributed to a late-game push from Anaheim. In all, this is the type of effort that the Canucks need to be putting out on a consistent basis. Having 9 HDCF in the final period is huge in helping bury the opposition and closing out games.
Advertisement
Ad
Advertisement
Ad
OEL might be the problem: I don’t think there’s a player as out of his rhythm as Oliver Ekman-Larsson. When looking over the stat sheet, the first thing that jumped out was Ethan Bear’s defence-worst 45.24 CF%. This seemed especially odd considering his solid debut against the Devils. However, that’s when it’s important to look at the defensive pairings. OEL had decent numbers, with solid CF% (54.29), xGF% (73.55), and HDCF% (85.71). But when taking a look at the impact that he had with Bear, it’s clear to see that his partner was doing a lot of heavy lifting. Bear’s Fenwick For %, a measure of the balance in unblocked shot attempts jumped from 55.56% with OEL to 71.43% without. The same goes for shots for% (55.56% with to 71.43 without) and xGF% (56.32 with to 91.73 without).
Advertisement
Ad
Advertisement
Ad

This is all with their main matchup being Trevor Zegras’ line, meaning that the OEL-Bear pairing was playing tough minutes. It seems like an odd fit to begin with, as though Bear is a good skater, he too is prone to making some costly turnovers which is something that OEL can’t cover for.
Bo Horvat, matchup king: Speaking of matchups, Bo Horvat was tasked with playing against Zegras’ line as well. As he usually does, the Canucks’ captain more than held his own against the rising young American. In their 10:18 minutes against each other, Horvat held the balance of CF% (52.63) and gave up an xGA of 0.53. He also victimized the Ducks in the faceoff circle, winning 73.91% of 23 draws while shouldering 11 defensive faceoffs. Horvat’s impact in matchups is also buoyed by good offensive results as of late, something the Canucks will need as they look to win more hockey games.
Advertisement
Ad
Advertisement
Ad
The night of threes: This isn’t advanced stats, but on the night that the Canucks celebrated old #3 Bieksa’s retirement, a lot of trifectas happened. Vancouver recorded win number three by three goals, with Kuzmenko potting a hat trick (3 goals) and Horvat putting up 3 points. Plus, it all comes with another number 3 watching from the pressbox (#freejack). The game also took place on November 3rd.

CF% – 56.76% HDCF% – 72.00% xGF% – 66.12%
The Canucks put in their best 60-minute effort against the Anaheim Ducks and are duly rewarded with an emphatic win. Though it wasn’t entirely perfect, it was as good as it gets in this tough start. Vancouver has now won 3 of their last 4 games and look to continue this trend against the Nashville Predators on Saturday at home.
Advertisement
Ad
Advertisement
Ad
Stats provided by naturalstattrick.com