Photo credit: © Bob Frid-USA TODAY Sports
By Michael Liu
2 months ago
Comments
Be sure to check out NHL lines site Betway for the latest Canucks game day odds!
Seems like traffic wasn’t the only thing ground to a halt last night.
Just when things looked like they were turning around for the Vancouver Canucks, they get slapped right back down to earth, losing 5-1 at home against the Washington Capitals. It’s yet another chapter in this roller coaster ride of a season, and another example of how frustratingly inconsistent this team can be at times. Not everything was bad, but there’s a lot to be shored up before this team can actually be considered to really be back in the playoff picture.
Here’s the loss, by the numbers.
As always, you can find our glossary guide of advanced stats here.

The first period buried the Canucks for the rest of this game. Perhaps the tight turnaround after the road trip was just too much for this team, who didn’t manage to start on time again. Washington dominated the opening frame and got themselves a lead they wouldn’t hand back. They finished the first period with a 9-3 advantage in high-danger scoring chances, piling on a 1.9 xGF with a total of 12 scoring chances. Vancouver wouldn’t find a push back until after the intermission, and by that time, the Capitals had already pivoted strategies and made defensive adjustments.
Advertisement
Ad
Advertisement
Ad
Vancouver would find their way back in the possession game, outpossessing Washington the entire way to the final buzzer. But looking at the xG trend line, it remained in the Capitals’ favour. What this points to is that the visitors were happy to concede puck possession, making adjustments that forced Vancouver to the perimeter to prevent any real threats at goals. This can be seen through how the Canucks were only able to generate five combined high-danger chances in the 2nd and 3rd, despite their 19 scoring chances. It suggests that their chances did not move the needle, with the Captials still posting 1.68 xGF in comparison to the Canucks’ 1.16 is the third. 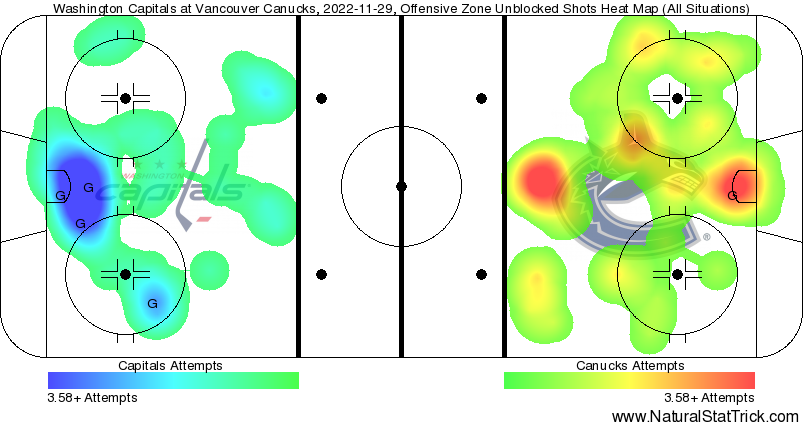 On the heat map, the Canucks have reverted to back to old habits from before the three-game win streak. They got collapsed in front of their own net, giving the Caps free rein to take shots from in tight. It shouldn’t really be a surprise, but again it is disappointing given that we’ve seen this team be able to prevent this from happening. Vancouver also gave up the large majority of these chances at 5v5, which feels like a regression back to how they started the season.
Advertisement
Ad
Advertisement
Ad
Offensively, it was the same story of falling back into previous patterns. They did get two mildly warm patches in front of the goal and from the point, which at first glance doesn’t look too bad. However, as soon as the filters are switched to look exclusively at even strength play, the Canucks’ spots disappear. This implies that Vancouver only managed to get a good concentration of chances on the power play, where high-danger shots are the expected norm. Essentially, Vancouver was nearly impotent at 5v5 play, something that is not condusive for sustained success and goal-scoring.

Corsi Champ: This game’s champ is JT Miller, rocking up with a 65.79 CF% to lead all Canucks. It makes sense, being part of the only line to generate a goal all night. What also helps is that Miller was able to match up against the Capitals’ second line, thus having somewhat of a skill advantage over the likes of Sonny Milano and Evgeny Kuznetsov. Still, Miller did well, finishing third in raw xGF (1.45) while creating 13 scoring chances, with 5 against. He’s looked better alongside Bo Horvat, and continues to show that Elias Pettersson was the brains and true centre of that lotto line.
Advertisement
Ad
Advertisement
Ad

Nils Höglander provides an answer for the #Canucks as he beats Darcy Kuemper with a silky smooth goal. Capitals lead is cut to one. pic.twitter.com/ziOwNZIyO1

Corsi Chump: This was definitely expected based on the roles and deployment, with the results that it generated. Ilya Mikheyev brought up the rear in the CF% department, finishing with a team-low 31.82. It makes perfect sense, considering how he, Pettersson and Andrei Kuzmenko were put to the torch by Alex Ovechkin. There wasn’t much in the way of scoring chances for Mikheyev either, generating three while giving up six to the Captials. Out of those six, five of them were high-danger, probably the reason why his numbers look as bad as they did last night. Only 33.33% of his faceoffs came in the offensive zone, while 25.00% of his shift starts were in the offensive zone.

xGF: Ethan Bear claims this game’s xGF award, putting up a 67.47 to lead Vancouver. Again, it was a solid game by the second-best RHD on this roster. Bear posted a positive CF% share against nearly every Capital he was on ice against, while limiting them to 5 SCA during his 19:34 TOI. In fact, Bear was the only Canuck to post a CF% over 50 after that first period. His play has been a quiet bright spot during his time in Vancouver and looks to have found a bit of a groove here.
Advertisement
Ad
Advertisement
Ad
While we’re talking about xGF, it’s worth mentioning two other interesting notes in this category. Kuzmenko was a close 2nd for Vancouver, putting up 66.89 xGF% with a team-fourth 1.13 xGF. Even despite the rough game by him and his line, these numbers imply that the Russian was still able to create good chances on a team that otherwise struggled to do so. The other note to point out is that the team leader in raw xGF was Bo Horvat (1.55). But, Horvat was also second-worst in xGA (2.05), pulling his xGF% down. Funnily enough, it was Trevor Van Riemsdyk and former Canuck Nic Dowd who brought these numbers down the most.
GSAx: This is probably Spencer Martin’s roughest game yet. There were goals that he probably would’ve liked back, but the team in front of him definitely did him no favours offensively or defensively. With the Capitals potting 4 goals against the Canucks with Martin between the pipes, while generating 2.41 xGF, this means that Martin finished with a -1.59 GSAx. There’s not a lot to say besides that, with three of the goals against being high-danger and one being low-danger.
Advertisement
Ad
Advertisement
Ad

There's no doubt in my mind that Spencer Martin is playing with the confidence of an NHL starting goaltender right now. Calm, collected and confident in his save selections. Holding the #Canucks in this game completely. pic.twitter.com/lVV3ny5pPV

Let’s talk about Petey, part 3: Yeah, you read the right. Today’s Musings has become one musing, because this is definitely worth dedicating this entire section to. Last night, Pettersson drew another matchup role against Washington’s top line of Ovechkin-Strome-Sheary. Unlike previous games though, the Swede got dummied hard by his opposition. Pettersson and his line suffered dramatically on the stats front, where they finished dead last in CF% (15.38), xGF% (15.64), xGF (0.1), SCA (4), and HDCA (3). They were second-last in SCF% to the Boeser-Dries-Garland line, which still continues to not move the needle.
That’s besides the point though, and plus the Pettersson line has a valid excuse. It was some tough minutes the munched against Washington, and the Captials showed that he still has work to do before being considered a true two-way force. Their blueprint was simple – play them physical and forecheck hard when given the opportunity. The opening goal is a pretty good example of that latter point, where two Captials hound Hughes behind the net and force a giveaway to Ovechkin.
Advertisement
Ad
Advertisement
Ad

Taking Ovechkin by himself, his numbers were heavily tilted against Pettersson. The great eight posted a 75.00 CF% against Petey, racking up a 71.56 xGF% share to go with the puck possession. Similar trends can be noticed when looking at Sheary and Strome as well, suggesting that the Capitals knew what their plan of action was in breaking down this unit. A knock on effect that might not be talked about is how exhausting a matchup role is. Pettersson kept it close with the first line, but perhaps due to extended shifts in the defensive zone racked up poorer numbers against other Capital players. For instance, Dowd (one of their main penalty killers) and Garnet Hathaway controlled a 100% Corsi share during their 2-3 minutes against each other, usually on the back end of a Pettersson shift.
Advertisement
Ad
Advertisement
Ad
It says a lot when at 5v5, Pettersson was the worst Canuck in CF% (13.33), on ice for all 5 goals against and posting the worst xGF% (13.94). It’s such a jarring difference from the EP40 we saw on the road, and the biggest thing is that it’s honestly understandable that this happened. Your best players need to be your best players if you want to win hockey games, and unfortunately for Vancouver this wasn’t the case offensively or defensively from Petey. It could be a combination of a wide variety of things, from the fatigue of playing this role, the adjustment needed, or Washington from simply doing their due diligence in scouting out the weaknesses of Pettersson and his line.
Advertisement
Ad
Advertisement
Ad
However, there is a bit of a positive to take away from this. Pettersson wasn’t actually that bad relative to his linemates. In fact, Pettersson still outperformed Mikheyev in the matchup role, and was even or slightly better metrically than Kuzmenko. What this implies is that even in a rough game from the centerman, Pettersson was still the driving force defensively on his line. Most of the reason why Kuzmenko looks better statistically at 5v5 were those high-danger chances he generated, not something that Pettersson could afford to do with his defensive assignments. Progression is never linear, and for all we know, this could serve as the catalyst for future developments.

CF% – 52.88% HDCF% – 38.1% xGF% – 40.04%
The Canucks returned home and did not start on time. They got outworked, outchanced, and outplayed by a visiting Washington Capitals team. The moment that they worked so hard to build in the past three games seemed to have disappeared, with a lot of the good trends being observed vanishing in Rogers Arena. Hopefully, this will be an anomaly, and Vancouver will be able to take lessons from this loss to improve and develop.
Advertisement
Ad
Advertisement
Ad
Vancouver returns to action tomorrow at home, facing off against the Florida Panthers.
Stats provided by naturalstattrick.com