Advertisement
Ad
The Statsies: But if you close your eyes, does it feel like nothing has changed at all? 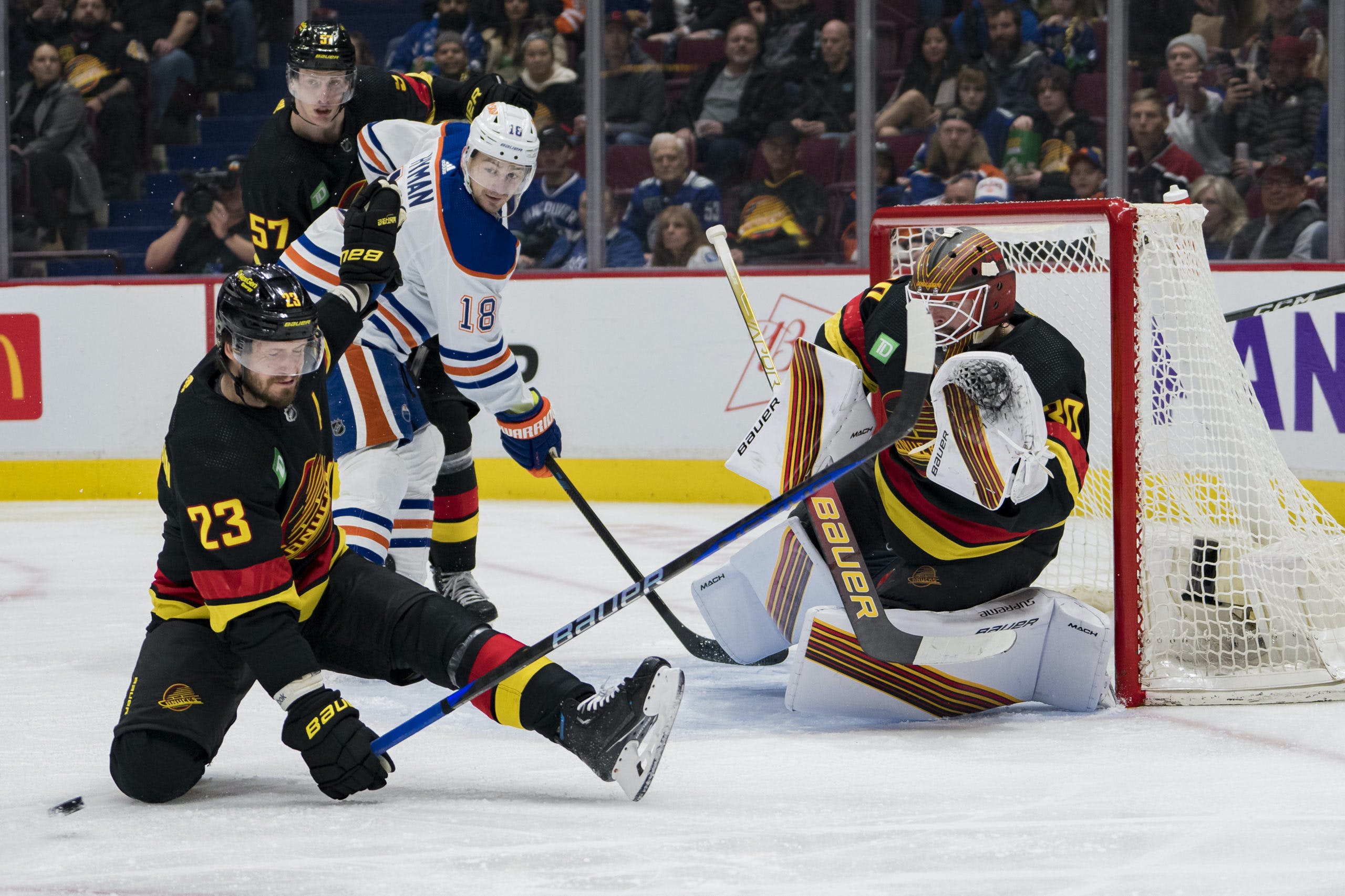 Photo credit: © Bob Frid-USA TODAY Sports
By Michael Liu
3 days ago
Comments
Be sure to check out NHL betting odds site Betway for the latest Canucks game day odds!
This team is good at one thing: when you think it can’t possibly get worse, it just does.

Class act right up until the end. Bruce Boudreau takes in the crowd and acknowledges the fan support as he walks away from the Canucks bench one last time. pic.twitter.com/mosvfla0Ie

The Vancouver Canucks repeated what they did against Colorado the night before. They got off to a slow start, had the game taken to them, got in a deep hole early, and couldn’t come back against a team in cruise control. The 4-2 loss against the Edmonton Oilers, in the background of a funeral procession for Bruce Boudreau, truly was unremarkable. It was the same stuff that has been on display all season, with only the faintest signs of life in this one.
Here’s the loss by the numbers.
As always, you can find our glossary guide of advanced stats here.

Nothing on this flow map should be a surprise. The Canucks simply got outplayed for the large majority of the game, the Oilers all over them in the early goings. That opening goal set the tone for the first and second periods, where everything was coming up Edmonton. The visitors ended up finishing the two periods with a combined 2.36 xGF, while the Canucks were lagging far behind with a 1.16 xGF. It makes sense too — Vancouver got doubled up on high-danger chances until this point too (10-5).
Advertisement
Ad
Advertisement
Ad
However, even in the third where the Canucks narrowed the lead down to one goal, Edmonton was still comfortably getting chances. In fact, the Oilers finished the third with a 1.89 xGF, whereas the Canucks only managed 1.08 even with two power plays to their name. The only consolation was that Vancouver out-chanced them 13-9, but with only one goal for and giving up an empty net goal against, there wasn’t much finishing happening. 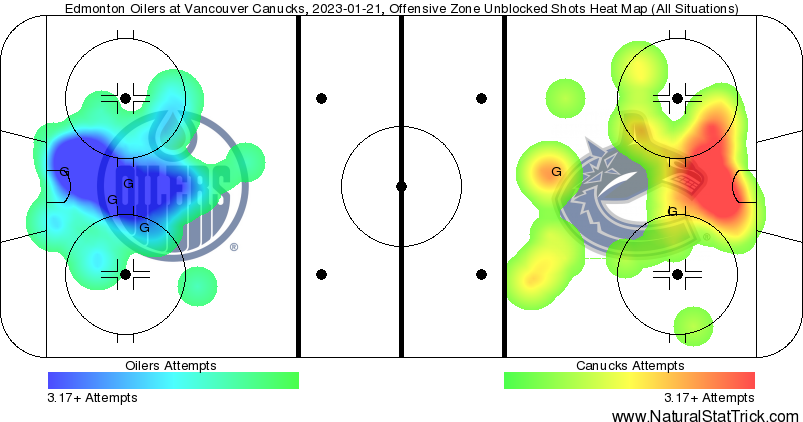 This heat map shows just why the Oilers managed to generate such a high xGF on the night with only a 15-10 edge in HDCF. Vancouver gave up an incredible amount of chances in the entire slot area, extending from their own crease to the very top of the faceoff circle. There weren’t many chances from elsewhere, meaning that when Edmonton got an opportunity, chances were that it came at a high concentration from a goal scoring area. It’s not ideal, especially considering how good the Oilers are offensively.
Advertisement
Ad
Advertisement
Ad
Meanwhile, the Canucks’ hotspot looks a lot smaller than the Oilers, though the placement isn’t awful. Being in tight against the crease is a good thing, though their concentration of chances was nowhere near as good as what Edmonton had. However, a good chunk of their opportunities came at 5v5, a bit of a promising change compared to previous losses.

Corsi Champ: Andrei Kuzmenko returns to a familiar throne, earning the champ title with a 64.00 CF% to lead all Canucks. Despite this and a goal to his name, Kuzmenko’s night wasn’t the best that he’s ever had. With the puck possession came only a 0.95 xGF, suggesting that Kuzmenko wasn’t efficiently getting chances against the Oilers. On top of that, his 1.60 xGA came in 4th last amongst forwards. This isn’t to say that Kuzmenko played poorly. However, the results weren’t the usual defensive excellence that we’ve come to expect from him — especially with the success against the top 6 of Edmonton.
Advertisement
Ad
Advertisement
Ad

EP40 with the gift for Kuzy 🎁 pic.twitter.com/nKYFKx99nI

Corsi Chump: Jack Studnicka ends up on the opposite end of the spectrum, finishing last night with a team-worst 37.50 CF%. The damage was relatively contained in only 12:25 TOI, but still wasn’t an ideal night for the bottom sixer. Studnicka was on ice for 9 scoring chances against, giving up 32.91 xGF% share during that time. His line saw time across the entire Oiler lineup, so there isn’t a specific matchup reason for his struggles last night. At least Studnicka wasn’t on the ice for a goal against.

xGF: This is a first. There was no Canuck that finished with over a 50% share in xGF%, meaning that ever single player on the roster was more likely to be scored against than they were to score. I won’t be awarding a champion here due to the aforementioned reason, but I’ll still highlight a couple of players here. Lane Pederson had the best xGF% share, coming in with a 48.58 xGF% to lead Vancouver last night. In terms of raw xGF, Quinn Hughes led the way with a 1.17, but by the same token gave up 2.36 xGA, the second-worst on the team. Elias Pettersson was a close second with a 1.04 xGF, and Tyler Myers finished third with a 1.03. These three were the only players to crack 1.00 xGF.
Advertisement
Ad
Advertisement
Ad
GSAx: It was a good night for Spencer Martin, after a couple of shaky starts. The netminder found himself facing 3.36 xGF, so with 3 goals against, Martin’s GSAx on the night was a positive 0.36. It doesn’t sound like much, but the stats show that Martin gave the team a chance to fight for the win. Two out of the three goals were considered high-danger, while the last one was recorded as a middle-danger goal. Considering all the other games that came before it, it’s a result that Martin will probably be happy to take.

Great diving save by Spencer Martin to keep the #Canucks alive. pic.twitter.com/coIOLacdX3

Leadership setting the tone: I’m using this entirely unironically. The captaincy crew of Horvat, Miller, Ekman-Larsson and Myers had a rough go against the Oilers. Miller was probably the most egregious offender. His CF% rating doesn’t look bad, but where things completely go off the rails is in the xGF department. Here, Miller only managed to generate 0.40 xGF… while giving up a team high 2.54 xGA. Yes, he was playing the most against McDavid, but that was only 8:54 out of 19:19 TOI. Miller gave up 9 HDCA, another team high.
Advertisement
Ad
Advertisement
Ad
Horvat wasn’t much better. His xGF-xGA shares are a similar story to Miller’s, a 0.49 xGF to go with a 2.22 xGA which bottomed out his xGF% to 17.99. Again, they did have to play against McDavid, but the results that they put up are far from what they’ve done in the past against him. As for the much maligned defence pairing, Myers stood out with a 1.91 xGA, the fourth highest on the team. Together, OEL-Myers held a 42.86 CF% share and 34.67 xGF%, which isn’t exactly what you want from 16.5% of your cap space.
St. Petersburg line reunion: And it was good, maybe not spectacular against the Oilers but one of the only units to do anything of note last night. The best line in the NHL at one point contributed the best CF% (75.00) on the team with the most ice time (11:55) at 5v5 action, generating a team-high 8 scoring chances for a team-leading 0.85 xGF and a 65.40 xGF%. As well, though they were a secondary matchup compared to their counterparts, Kuzmenko-Pettersson-Mikheyev did not perform nearly as poorly against the McDavid line in about 5 minutes against, coming in with high 30’s in CF% and xGF%. With Mikheyev not being at his best as of late, perhaps putting this line together can get him going again.
Advertisement
Ad
Advertisement
Ad

CF% – 52.13% HDCF% – 43.33% xGF% – 40.00%
It’s a loss that shows so much of the issues that plagued this team all year. What makes it worse is that it just feels like yesterday that the Canucks started off their season with some of the best hockey they’ve played in years against these very Oilers. The disintegration, the chaos, the off the ice drama, it truly sometimes feel that nothing has changed even after the firing of the Benning regime just 13 months ago. Nothing with this Canucks teams has changed, and the first casualty has befallen Bruce Boudreau. This franchise didn’t deserve him.

Vancouver gets a bit of a layoff until the Chicago Blackhawks come visit on Tuesday. New head coach Rick Tocchet might just had a free win handed to him… or not.
Advertisement
Ad
Advertisement
Ad
Stats provided by naturalstattrick.com