Advertisement
Ad
The Statsies: Breaking down the numbers behind Elias Pettersson’s monster performance 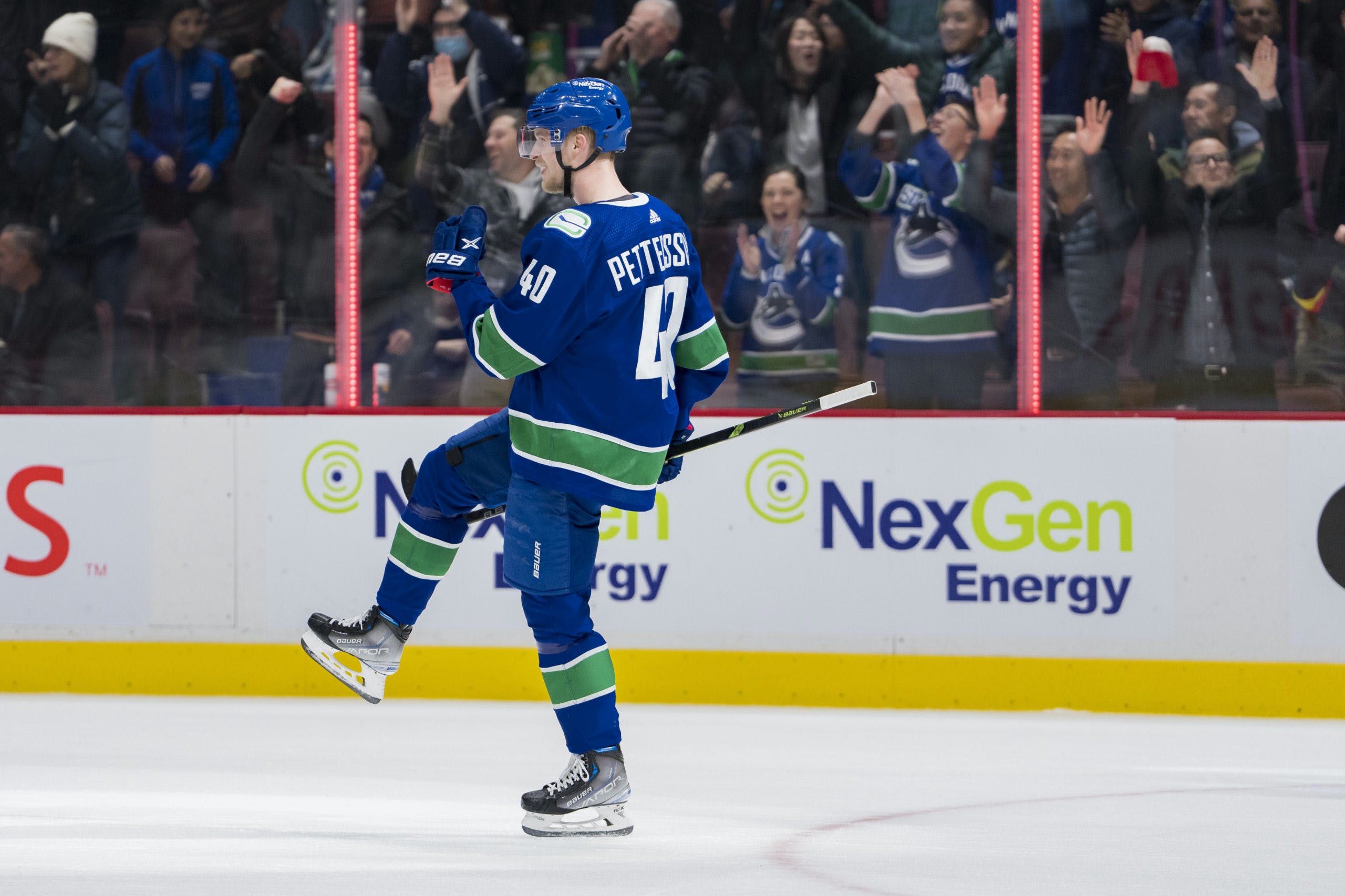 Photo credit: © Bob Frid-USA TODAY Sports
By Michael Liu
1 month ago
Comments
Be sure to check out NHL betting odds site Betway for the latest Canucks game day odds!
This team truly is a rollercoaster.

The Seattle Kraken arrived in Rogers Arena and unfortunately came up against the wrath of one Elias Pettersson, who nearly singlehandedly denied them two points in a 6-5 shootout decision. This game looked like it was going to get out of hand early, but Pettersson willed this team in his return from illness across the finish line. Somehow, for these 60 minutes, he patched over the glaring flaws that this Canucks team has.
Here’s the win, by the numbers.
As always, you can find our glossary guide of advanced stats here.

Much of the game flow makes sense with how the momentum was swung in this game. The only reason why Vancouver had their first period spike in expected goals and puck possession was from the power play they had, getting enough chances to tide themselves over for a positive finish in the first period. At 5v5 play, the Kraken controlled a 55.17 CF% share throughout the game, with the first period (66.67) being the best of their three periods. Their 60.29 xGF% at 5v5 also shows how Seattle continued to outplay the Canucks at even strength.
Advertisement
Ad
Advertisement
Ad
With their 5v5 play cratering, the Canucks relied on their special teams to stay in the game. On their power plays alone, Vancouver generated an xGF of 1.01, about a third of the total 3.66 xGF they had last night. It allowed them to tilt much of the models in their favour, but should be taken with plenty of context on the situations that gave them their statistical leads. Something should be said about fighting against the momentum of a team, so credit the Canucks for being able to weather a storm. 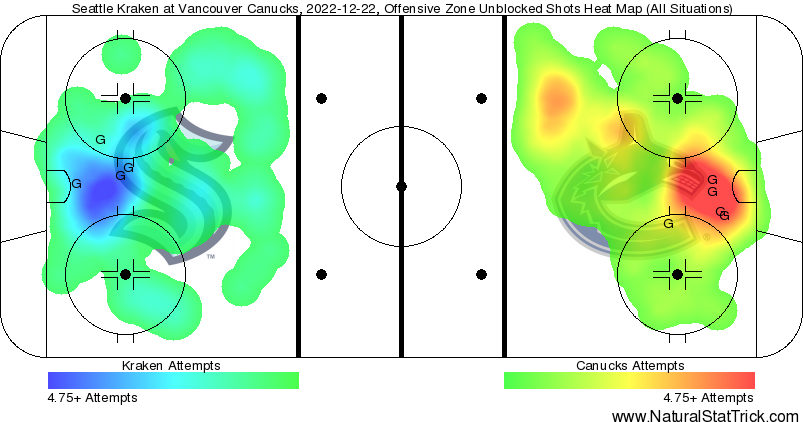 Not an awful display on the heat map last night. Vancouver did give up four goals, but also managed to limit the number of high-danger chances that they gave up in the slot in comparison to previous games. However, what should be pointed out is that there were multiple defensive lapses from both the defencemen and forwards tracking back, resulting in missed coverages that gave Seattle a wide area to work with. That would explain the spread that the Kraken were able to have, with nearly all of their chances coming at 5v5 play.
Advertisement
Ad
Advertisement
Ad
On the other side, Vancouver’s dense net-front hot spot seems to suggest that the home team was able to get what they wanted, where they wanted. While it’s true the Canucks did get three of their goals at 5v5 play, right from in tight, the majority of those dangerous chances came on the power play. This isn’t a bad thing, especially for a historically much-maligned unit. But, on the flip side, if a team is relying solely on their power play to generate high-danger chances, it doesn’t lend well to the probability of repeatable and sustainable scoring.

Corsi Champ: It makes sense that Andrei Kuzmenko would take this one. Being reunited with Pettersson brought out the best in the Russain once more, who put up a team-leading 70.21 CF% last night. Kuzmenko was all over the ice last night making plays, completely dominating Seattle’s first line whenever they were out against each other. Kuzmenko chipped in with a goal and two assists, an excellent contribution alongside his main centre this season.
Advertisement
Ad
Advertisement
Ad

Corsi Chump: The fourth line did not have a great game last night, and thus Nils Åman earns the Corsi chump title with a 28.57 CF% against the Kraken. Åman was out there for two goals against, allowing 15 scoring chances of which 5 were high-danger. He also posted the worst xGF% (19.63), giving up an xGA of 0.91 while only recording 0.22 xGF. Overall, not a game to remember for Åman and his line, where they got caved in only 11:28 time on ice.

xGF: This one should also be no surprise, as Kuzmenko records the highest xGF% with an 82.41. Alone, the winger accounted for 22 scoring chances for with 11 of them being high-danger. Kuzmenko was defensively responsible too, registering 6 chances against with only 2 considered high-danger. The Pettersson-Kuzmenko combination has spent some time on the shelf, but reuniting them was exactly what this team needed to get the offensive punch that they needed.
Advertisement
Ad
Advertisement
Ad
GSAx: Spencer Martin didn’t have his best night again. The netminder has turned in a couple shaky outings in a row now, and against the Kraken, it was much of the same. With Seattle recording 3.09 expected goals last night, Martin finished with a -1.91 GSAx in the shootout win. Much of this could probably be chalked up to the two middle-danger goals that he gave up and the terrible goal from the neutral zone, dragging his xGA down when conceding them. Martin could do with some rest, having seen his play start to slip as he’s been ridden by Vancouver down the stretch.

Yup, this is going to be the entire section. Elias Pettersson came back into the lineup and carried the slumping Canucks to two points. Not enough can be said when looking at the impact he has in the lineup, with game-breaking ability to go with a developing, responsible two-way style.
Advertisement
Ad
Advertisement
Ad
Finding himself between Kuzmenko and Lane Pederson, Pettersson didn’t appear to miss a beat. This line played the most minutes out of any unit on the Canucks (11:18), while being the best by far statistically. They led all Canucks lines in CF% (52.00), xGF (0.61), xGF% (66.46), SCF (9), HDCF (6), and HDCF% (75.00). Pettersson’s line didn’t log easy minutes either, often facing off against McCann-Gourde-Eberle through the night. It’s impressive that they didn’t give up a single goal against, but oddly enough, that’s also to be expected. Both Pettersson and Kuzmenko have shown their defensive chops, and it shone through against the Kraken. The entire trio led the Canucks in xGA (Pederson – 0.32, Kuzmenko – 0.37, Pettersson – 0.49).

Pettersson is simply magnificent when he’s on top of his game, an absolute terror as a two way force

Advertisement
Ad
Advertisement
Ad
While Pettersson wasn’t placed in a matchup role, his impact defensively is immediately noticeable when looking at the Kraken’s numbers. Taking Jared McCann, when he was up against Pettersson, his CF% dropped to 16.67, registering a minuscule 17.23 xGF% with the Swede raining 7 scoring chances down on him. The Kraken were also held to only 7 scoring chances when Pettersson was on ice, 2 of them recorded a high-danger. It’s ridiculous to think that in a total of 19:33 minutes, Seattle only managed to attempt a shot in front of the goal twice. Not only is it clear that Pettersson is able to defensively suppress the opposition, but against the Kraken, he made his chances in spades.
What’s also impressive is how Pettersson worked alongside Pederson, who looks pegged as an AHL tweener. Finding himself lining up on the top line, somehow Pederson didn’t look out of place at all. His defensive work was solid, as mentioned before, and he also managed to double his NHL goal total thanks to an excellent Pettersson feed. It gives the statement that Pettersson is the “brains” of his line all the more evidence, suggesting that his play isn’t just individual, but has tangible impacts on the wingers that he’s lined up with. This combination might just see a longer run thanks to the results it produced against the Kraken.
Advertisement
Ad
Advertisement
Ad

All eyes on Pettersson, not a single soul thinking about Pederson lmfao pic.twitter.com/rMicwZms20

Despite not being named in any of the previous categories, Pettersson wasn’t far off the lead from Kuzmenko. He had the second-highest CF% (69.23) and second-highest xGF% (82.03), just barely missing out on his linemate. However, Pettersson did lead the team in raw xGF (2.26), scoring chances (24), and tied for the lead in HDCF% (84.62). His 36 Corsi-for was second only to Quinn Hughes’ massive 43. The numbers show a player that is clearly confident, one that is not only skilled but able to generate chances consistently. Not only is the effect noticeable on offence, but defensively it is such a boon to have a player that won’t give up much against while tilting the ice in their favour. It’s a deadly combination, and Pettersson showed exactly what that can look like last night.
Advertisement
Ad
Advertisement
Ad

CF% – 52.05% HDCF% – 57.58% xGF% – 54.25%
This was the Elias Pettersson game. Without him, this team would’ve lost 5-0. Instead, Vancouver takes a 6-5 shootout win at home in large part thanks to the return of their superstar centre. He showed exactly what this team missed without him in the lineup, and is probably the sole reason why two points were even on the table. Pettersson’s play has been phenomenal, which Canucks fans will hope to see a lot more of down the road.
Vancouver returns to action tonight as the Edmonton Oilers roll into town for a back-to-back matchup.
Stats provided by naturalstattrick.com