Advertisement
Ad
The Canucks are nearing a crossroads: It’s Jim Benning or the fans 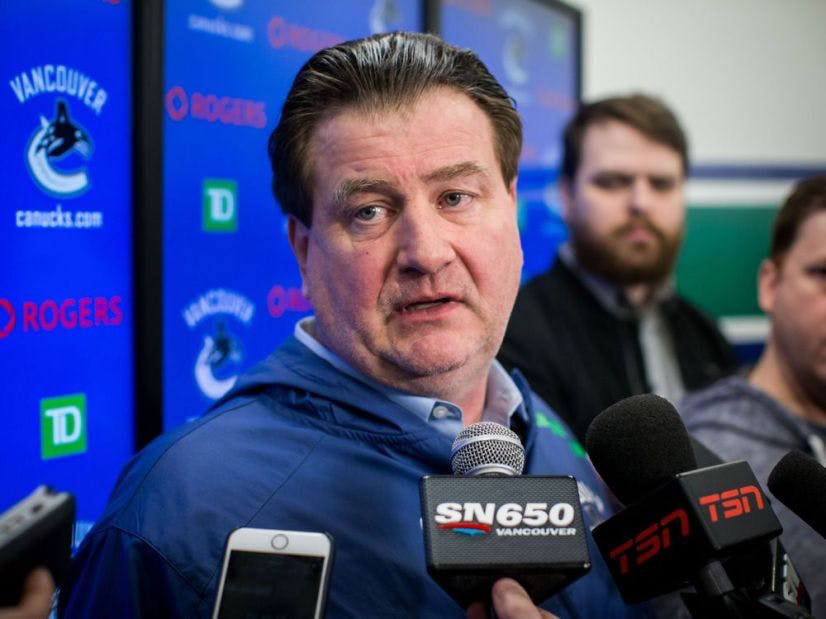 Photo credit: Ben Nelms /PNG Merlin Archive
By Lachlan Irvine
1 year ago
Comments
If the Vancouver Canucks intended on putting together a textbook performance against the Colorado Avalanche on Wednesday night, they did exactly that.
Just in the exact opposite way that they intended.
On the ice, Vancouver’s 4-2 loss to the Avalanche was as standard as they’ve come all season. They gave up the first goal of the game (while shorthanded, no less) and looked disengaged throughout the first period before turning things around in the second, with 20 minutes of quality hockey and a tie game for their efforts.
Then in the final frame, like clockwork, it all fell apart.
Every single ghost from this season keeps coming back to haunt the Canucks on a nightly basis. The penalty kill allowed three goals. The team’s most important offensive pieces were held off the scoresheet, save for two completely undisciplined penalties in the third. The goaltending from Thatcher Demko was solid, but not enough to win without run support.
Advertisement
Ad
Advertisement
Ad
Needless to say, the story on the ice hasn’t changed at all this season; it’s barely changed over the last eight years. Everything we’ve said over the course of this management regime’s tenure has been said in a thousand ways before in a thousand different articles and Twitter threads, and yet nothing improves.
So how do you tell an old story in a new way? With a brand new voice, and last night, it arrived in the form of a jaded, angry Rogers Arena crowd. Despite the rink being nowhere near full capacity, some of the people who did show up voiced their opinions loud and clear.
It didn’t take long for the first signs of frustration to show up. Literally.

if you don't understand what is happening with the canucks just show them this video pic.twitter.com/0haLrSIHuv

Over the course of the evening, more and more symbols of a fanbase’s discontent began to show up, thanks in large part to a number of fans smuggling in signs that Rogers Arena security worked to confiscate throughout the game.
Advertisement
Ad
Advertisement
Ad

Entire section booed at security when he confiscated it.

By the waning minutes of the third period, a smattering of boos had turned into an audible chorus of unhappy fans, with a few chants of “Fire Benning” pushing to be heard over the in-arena music.

The boos are no joke and the #FireBenning’s are popping out of certain sections. pic.twitter.com/UqpVNhgmmc

It was certainly a noise that Canucks players like Quinn Hughes are now aware of. “I take that personal too because the reason there’s those conversations is because guys aren’t doing their jobs,” Hughes said about the pressure on management after the game.
“It’s not just them, it’s our team. It’s our personnel on the ice, so it starts with us.”
Once Gabriel Landeskog hit the empty net goal and sealed the Canucks’ fifth straight loss, the crowd filing for the exits made their loudest statement of all.

The clips and pictures circling the internet are just the tip of the iceberg. Some season ticket holders are considering pulling the plug early, the ticket resale market is full of shockingly cheap deals for once-coveted seats, and even some that did pay to be there did so with paper bags over their heads.
Advertisement
Ad
Advertisement
Ad

the bags are out pic.twitter.com/3FXLVASznf

Last night, the Canucks’ franchise got closer to a true crossroads; one that could shape the course of their future for years to come. Saving this season might be a task too large for the players and coaches in the locker room to overcome, but team ownership has a major decision to make; one that could either preserve and rebuild what little trust Canucks fans have left, or drive them away even further.
It’s time for the Canucks to turn the page on this dark, eight-year-long chapter and begin writing a brand new one. How do you tell a story in a new way?
With a brand new voice.

With each loss at home and poor performance, the chants and discontent in the fanbase is only going to grow louder and louder as the Canucks get closer and closer to having to decide between the fans or their GM.
Advertisement
Ad
Advertisement
Ad
Some may even suggest that after last night, they’re already there.
Benning will speak to the media at 11 AM today, and we’ll have complete coverage of that press conference. Stay tuned.

BROUGHT TO YOU BY DAILYFACEOFF

Looking to up your fantasy hockey game? DailyFaceoff has the tools you need for both daily and season-long fantasy leagues, including a lineup optimizer, daily projections, and a whole lot more. Sign up for the DailyFaceoff tools here.