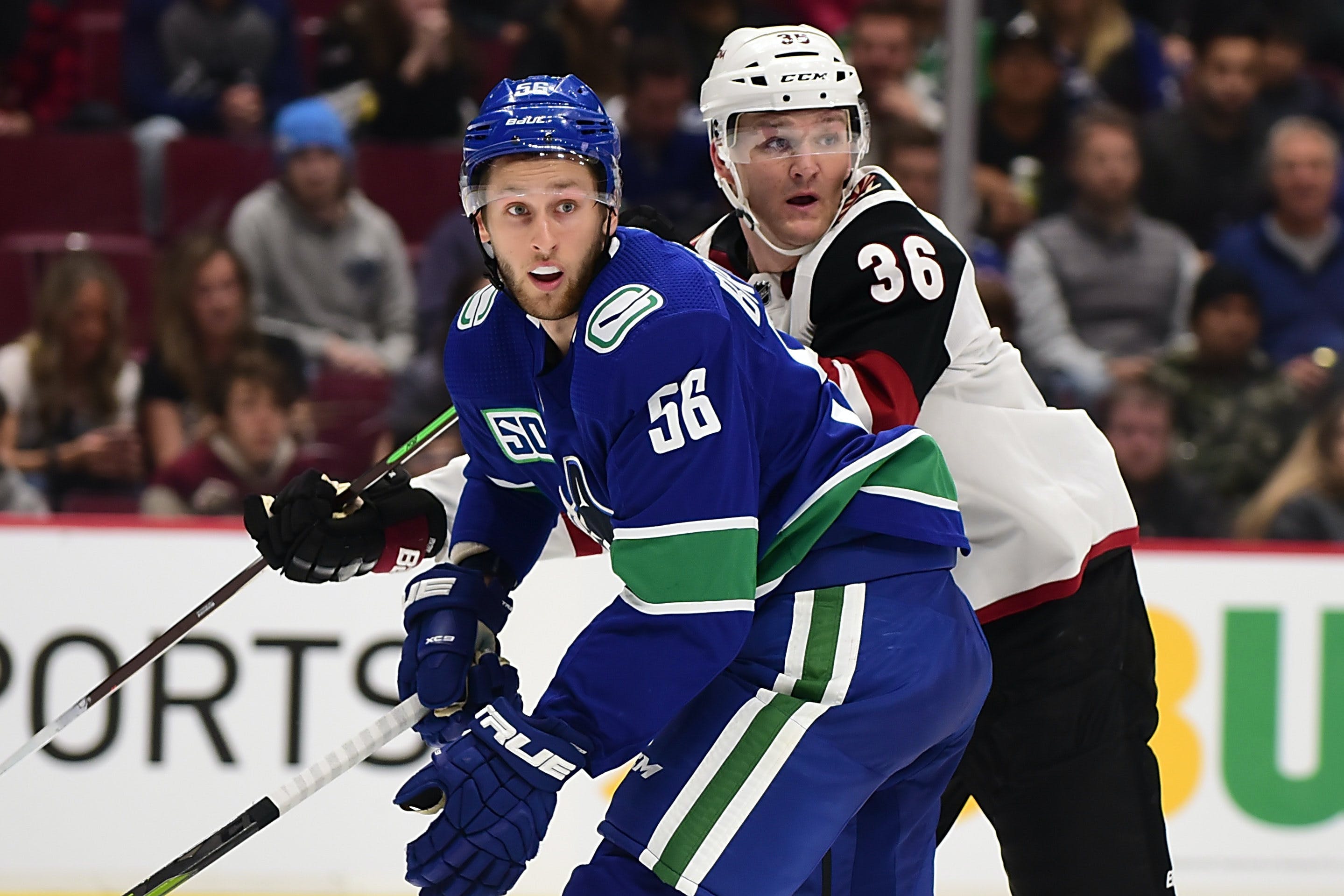 Photo credit: © Anne-Marie Sorvin-USA TODAY Sports
By Michael Liu
3 months ago
Comments
Welcome to our game day content brought to you by NHL Lines site Betway!
I should’ve turned right around when I saw this walking in.

The Canucks remain winless through 7 games as they eat another loss, this time 3-2 at the hands of the Carolina Hurricanes. The score flatters them, but in reality, Vancouver was never even close to Carolina when it mattered. And now, their fading playoff hopes dim even further just seven games into the season.
Here’s what the numbers had to say.
As always, you can find our glossary guide of advanced stats here.

There was never a moment that Carolina wasn’t in control. In fact, it felt as if the Hurricanes were content to provide the illusion that Vancouver was actually competitive for most of the game. The Canes outshot the Canucks through the entire duration of the game and decided to take over when it really mattered. That quick drop in xGF early in the third was really all the Hurricanes needed to bring this home.
Advertisement
Ad
Advertisement
Ad
Sure, the Canucks might’ve gotten within one. But that was a lucky goal, and they didn’t get near the possession or chances they needed to tie this one up.

The heat map suggested the Canucks actually played pretty decent defence. A light blue in that high-danger area is surprisingly impressive from this defence group, which was pretty much a Calder Cup-winning lineup. It was an improvement from games past and shows that if pushed, the defence can adjust and suppress those chances in the slot. If the hottest patch you’re giving up to a team is from the point, that’s all you can really ask for in an xG situation.
However, the real howler here is what’s seen in the offensive zone. The Canucks did not have a single hot spot. It is truly astounding to see that there are simply patches of green with a faint hint of orange in the high slot. Yes, Carolina is a defensively organized team with excellent team defence and defensive personnel. But that shouldn’t mean the Canucks couldn’t get good attempts from dangerous areas. It wasn’t for lack of effort, but at this point, effort simply isn’t good enough.
Advertisement
Ad
Advertisement
Ad

Corsi Champ: This might’ve been the biggest surprise of the night. In his season debut, Guillaume Brisebois led the Vancouver Canucks in Corsi. Whether this is a good thing or a bad thing, we’ll let you decide. Brisebois posted a 50.00 CF% to lead all Canucks, as well as leading all defencemen in scoring chances against (4) and high-danger chances against (2). Pretty solid stuff, all things considered for an ever-dependable AHL call-up.

Guillaume Brisebois: I’m trying to bring some new energy. I’m just going to play my game, keep it simple, and hopefully get the win. #Canucks @Sportsnet650

Corsi Chump: Another defenceman earns this title, and it’s probably who you think it is. Tyler Myers brought up the rear of the pack with a 24.32 CF%, conceding the worst xGA (1.51) and xGF% (5.47) on the Canucks. His 12 scoring chances against was a close second and he didn’t manage to generate a single high-danger chance while he was on ice. There really isn’t much that went right for Vancouver’s chaos giraffe, unfortunately.
Advertisement
Ad
Advertisement
Ad
xGF: I can’t believe I’m saying this part two. Guillaume Brisebois takes this category too with an outstanding 76.22 xGF%, putting him at a 57.46 xGF% rel to his teammates. One might think this is because his defensive metrics were good and that’s the reason why his xGF% is that high, but that isn’t the case. Indeed, his defensive metrics were the best on the team, but Brisebois also posted the second-highest xGF (1.20) amongst all Canuck skaters. Only Luke Schenn outdid the former 66th overall pick (1.29 xGF), but conceded more xGA.
Again, make of that as you will.
GSAx: Thatcher Demko had a better game. But it wasn’t a good game by his usual standards. The Canucks relied on him to post an absurd goals-saved-above-expected to win games last season, and when he isn’t doing so this year, it really shows. Demko was a 0.33 GSAx against the Canes, which again, is not bad by any means. But it also marks his first positive GSAx this season, and it was also not enough to steal a Vancouver victory.
Advertisement
Ad
Advertisement
Ad

JT Miller’s day at wing: So, Miller produced two goals while sliding onto the wing? Seems like we’ve found our answer… except not really. Miller was marginally better last night, playing alongside Bo Horvat and Ilya Mikheyev. However, that unit absolutely ate it against the Canes. Mikheyev-Horvat-Miller was the worst Canucks forward line at 5v5 adjusted in CF% (20.87), CF% rel (-11.85), and HDCF% (0.00). They did lead the Canucks in xGF… with 0.09. This line led the Canucks in TOI (12:31).
Yeah, it was that sort of night. At least Miller scored twice and looked more engaged.

Millsy gets us within one! pic.twitter.com/7pPM58gPRg

Hurricane Warning: The Carolina Hurricanes are trying to compete for a Stanley Cup, while the Canucks are just desperately hoping they’re a bubble playoff team. This is a fact and should be taken into context for what will come next. The Canes wiped the floor with the Canucks at 5-on-5 play last night. They held significant advantages in CF% (67.03-32.97), SCF% (72.5-27.5), HDCF% (76.47-23.53), and xGF (73.6-26.4). If a team is dominating two-thirds to three-quarters of possession, scoring chances and high-danger chances, there’s some serious beatdowns happening.
Advertisement
Ad
Advertisement
Ad
The scary part is that the Hurricanes were on the tail end of a road trip, and still managed to get better with each period. In fact, they whittled the Canucks’ xGF down from 0.59 in the first to a measly 0.18 in the third. Again, the scoreboard does flatter the home team quite a bit.
This is the difference between a contender and a possible wild card.

CF% – 35.51% HDCF% – 31.58% xGF% – 36.14%
Don’t let the 3-2 scoreline fool you. The Canucks played hard but got rolled over by the Carolina Hurricanes in possession and scoring chances. Brisebois was potentially the only bright spot in this entire game. Next up, Vancouver heads down the I5 for a match-up against the Kraken on Thursday. The leak is growing bigger by the moment.
Advertisement
Ad
Advertisement
Ad
Stats provided by naturalstattrick.com