Advertisement
Ad
The Statsies: Elias Pettersson a Corsi King, but Canucks allow too many high-danger shots vs. Seattle 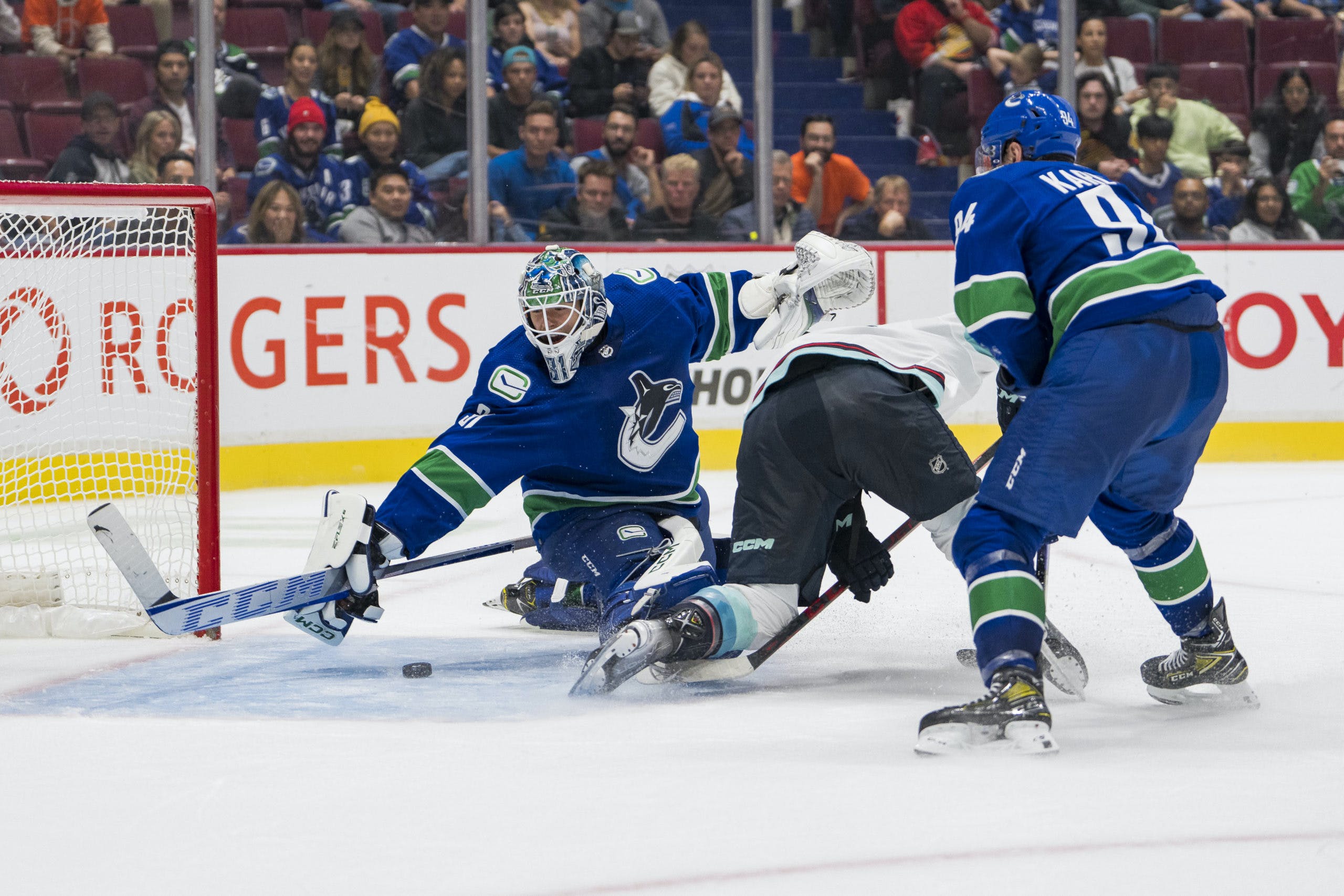 Pleased to officially announce that the CA analytics-based post game formerly known as The Statchies will now be called “The Statsies” because of this reply.

No, we’re not kidding. https://t.co/Eo1aDvcbrS

Welcome to the second pre-season edition of The Statsies, where we unpack Canucks game action through advanced stats. With four preseason games left to go, the time for experimentation is well underway along with the usual stars shaking off the rust. There’s still a ways to go before this team is ready for the regular season.
Here’s how the 4-3 overtime loss against the Kraken played out, by the numbers.

Interestingly enough, though the possession metrics favoured Vancouver heavily throughout the game, it was Seattle that earned the higher xGF%. It was as if a switch flipped halfway through the first period to shift the goal-scoring chances to the tides of the Kraken. What could explain this trend are the 5 Vancouver power plays giving the Fenwick numbers a bit of a boost. At the same time, realistically they weren’t able to generate any expected goals from that possession advantage. The cycling start to overtime surely didn’t hurt either.
Advertisement
Ad
Advertisement
Ad
That being said, it’s a little concerning that the Canucks ceded the xGF and then proceeded to lose the game to what essentially amounts to an AHL lineup. It’s disappointing, especially after such a solid first period. They’ll need to work on maintaining momentum over the course of an entire game and look for the quality of possession to go with the quantity. 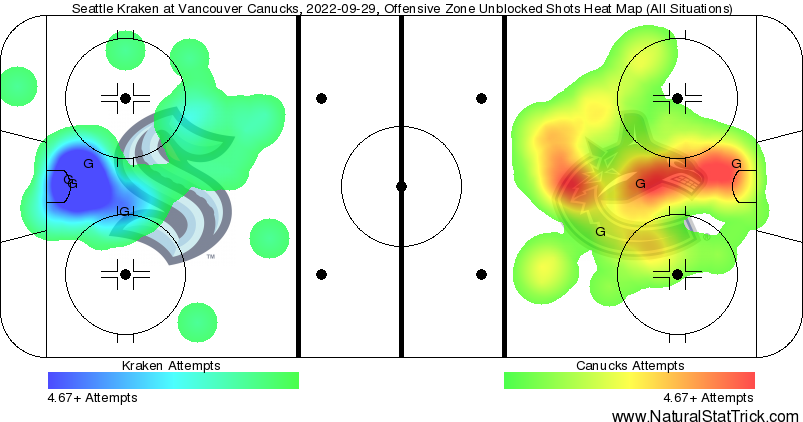 Like against Calgary, it’s a very encouraging sign that the Canucks are attempting shots in high-danger areas. That chunk of red throughout the slot means that pucks are being worked into places where goals are usually scored. It’s nice to see that red spot at the point too. Quinn Hughes has mentioned how he would like to shoot more this season, and it showed especially on the power play. Hopefully, those chances will convert to goals sooner rather than later.
Advertisement
Ad
Advertisement
Ad
Unfortunately, just like against Calgary, the Canucks yielded too many opportunities in high-danger areas as well. The Kraken formed a bubble in their heatmap, basically engulfing the crease with their shot attempts. While that spot on the right flank was missing, that could be a result of an AHL roster funnelling most of their chances right down the middle. If Vancouver wants to win games, they can’t be giving up those kinds of shots very often.

Corsi Champ: This one is hands down Elias Pettersson. Coming in at a whopping 75.00 CF%, Petey was 23.78% more effective than the rest of his team possession-wise. Pettersson was also able to generate 6 high-danger scoring chances while just conceding 4, along with leading the team in shots. He didn’t have a goal to show for it, but his passing game was also locked in.
Advertisement
Ad
Advertisement
Ad

J.T. Miller, Elias Pettersson and Andrei Kuzmenko looking like the Harlem Globetrotters on the power play. #Canucks up 2-0. pic.twitter.com/hyzyh9PFL4

Shane Wright's welcome to the NHL moment is here pic.twitter.com/QxQdQ0Rf3Z

Corsi Chump: It pains me to say that Sheldon Dries is this game’s Corsi chump. The 4th leading scorer in the AHL last season, Dries was unable to secure much of the puck, putting up a 40.00 CF% and a -25.52% compared to his teammates. It also didn’t help matters that he gave up 10 scoring chances against on ice, with 6 of them being high-danger. Dries is a goal-scorer, and unfortunately when he’s putting up an xGF of 0.35, he’s more than likely AHL-bound.
Advertisement
Ad
Advertisement
Ad
xGF: This is going to be given to two players. Quinn Hughes led the Canucks in xGF with 0.77, showing his offensive prowess with 8 HDCF to lead Vancouver. However, since he is a defenceman, Hughes’ xGF% suffers thanks to the 1.68 xGA that he also produced. This leaves him with an xGF% of 31.43%, -8.49% in comparison to his teammates.
This is why the next nominee is here as well. Nils Höglander led the team with a staggering 95.34 xGF%. The Swede had 4 scoring chances with 2 of them being high-danger, while yielding no high-danger scoring chances against. While Höglander didn’t get on the board tonight, he finished third in CF% (76.47) and generally was a hound on the puck. The points will come if he keeps playing the way he does.
Advertisement
Ad
Advertisement
Ad
GSAx/60: Since we have another split goalie game, it’s best if we look at the rate metrics for each goalie. Thatcher Demko started off this game and was his usual dependable self. In 40 minutes of gameplay, the Canucks starting netminder was once again a big reason why they held a 3-1 lead going into the third. With a 0.944 SV%, Demko was expected to concede 3.03 goals but only conceded 1 goal on 18 shots. This leaves him with a GSAx of 2.03, and a GSAx/60 of 3.05 for the game.
As for Quads’ favourite child Arturs Silovs, he… didn’t have as good of a game as his last outing.

Maybe don't watch how Silovs moves on this Kraken goal. Or do if you like to learn!

With no #Canucks defender covering Kole Lind in front, Silovs doesn't seal off the post and loses his angle when the puck gets deflected. #Canucks lead cut to one. pic.twitter.com/UrZt2YYrcB

Advertisement
Ad
Advertisement
Ad
Blowing a 3-1 lead is tough enough, and Silovs just couldn’t seem to get settled in. He gave up 3 goals on 10 shots in the third and overtime, leading to a -1.77 GSAx and a -4.36 GSAx/60. Funnily enough, that’d still be a lot better than David Rittich’s horrific -14.735 GSAx/60 from last season. Silovs needs some time in the AHL to develop and mature.

Andrey Kuzmenko’s impact: Kuzmenko’s two-goal, three-point preseason coming-out party was the high point of the game. Skilled, fast, and looking like he belonged on a line with Pettersson, the Russian was all over the ice tonight making plays. He finished second on the team in CF% (73.81%) with the third-highest xGF% (67.02%), while generating 6 HDCF. Taking a look at his individual event map, it suggests that Kuzmenko loves driving to the net:
Advertisement
Ad
Advertisement
Ad 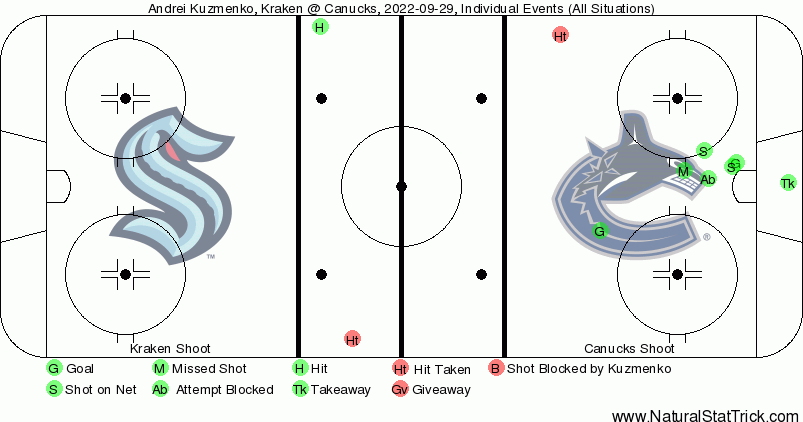 Kuzmenko's got that dawg in him. Looks like he has an NHL game to him. pic.twitter.com/L61gEnccLr

There’s a lot to like about his debut and a lot to look forward to. If anything, it’s already promising to see that Kuzmenko isn’t afraid to take it in tight, getting into goal-scoring areas and being the target man for a pass. Plus, he’s got a heavy shot if he wasn’t enough of an offensive threat.

A bottom-6 dark horse: Nils Åman should be talked about more. A low-event player, Åman was a beast at 5v5 play. Accounting for score and venue adjustments, he finished first in CF% (86.35%) and second in xGF% (94.44%). Åman also didn’t give up a single high-danger chance against while on even strength. It’s something to keep in mind as the preseason goes along, as he’s looking to be a very responsible forward defensively with the potential to chip in offensively in a small sample size.
Advertisement
Ad
Advertisement
Ad
New look power play?: The Canucks’ struggles on the man advantage have been long publicized. Tonight, that seemed to change, as even though they finished 2/5, the units looked dynamic. There was more activation, players shifting positions and making the PK unit move around to defend. Vancouver also looked to shoot a lot more, something that had been lacking in seasons past. This heat map gives the impression of a very methodical, well-organized power play – which will hopefully continue to get better. 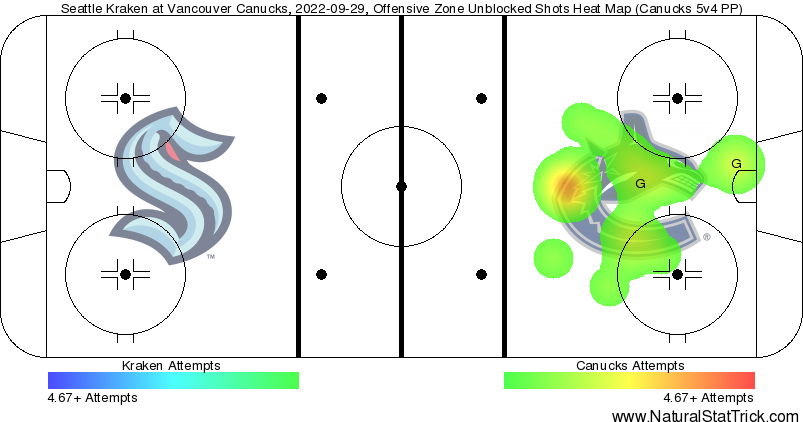 CF% – 59.02% HDCF% – 41.67% xGF% – 42.53%
The Canucks had themselves a ton of possession but weren’t able to generate the chances or goals that they wanted to. It showed on the ice and showed in the result. Vancouver will look to bounce back and get some revenge on October 1st when they head into the Kraken’s den in Seattle.
Advertisement
Ad
Advertisement
Ad
Stats provided by naturalstattrick.com