Advertisement
Ad
The Statsies: The numbers show the Canucks choked away a game they controlled 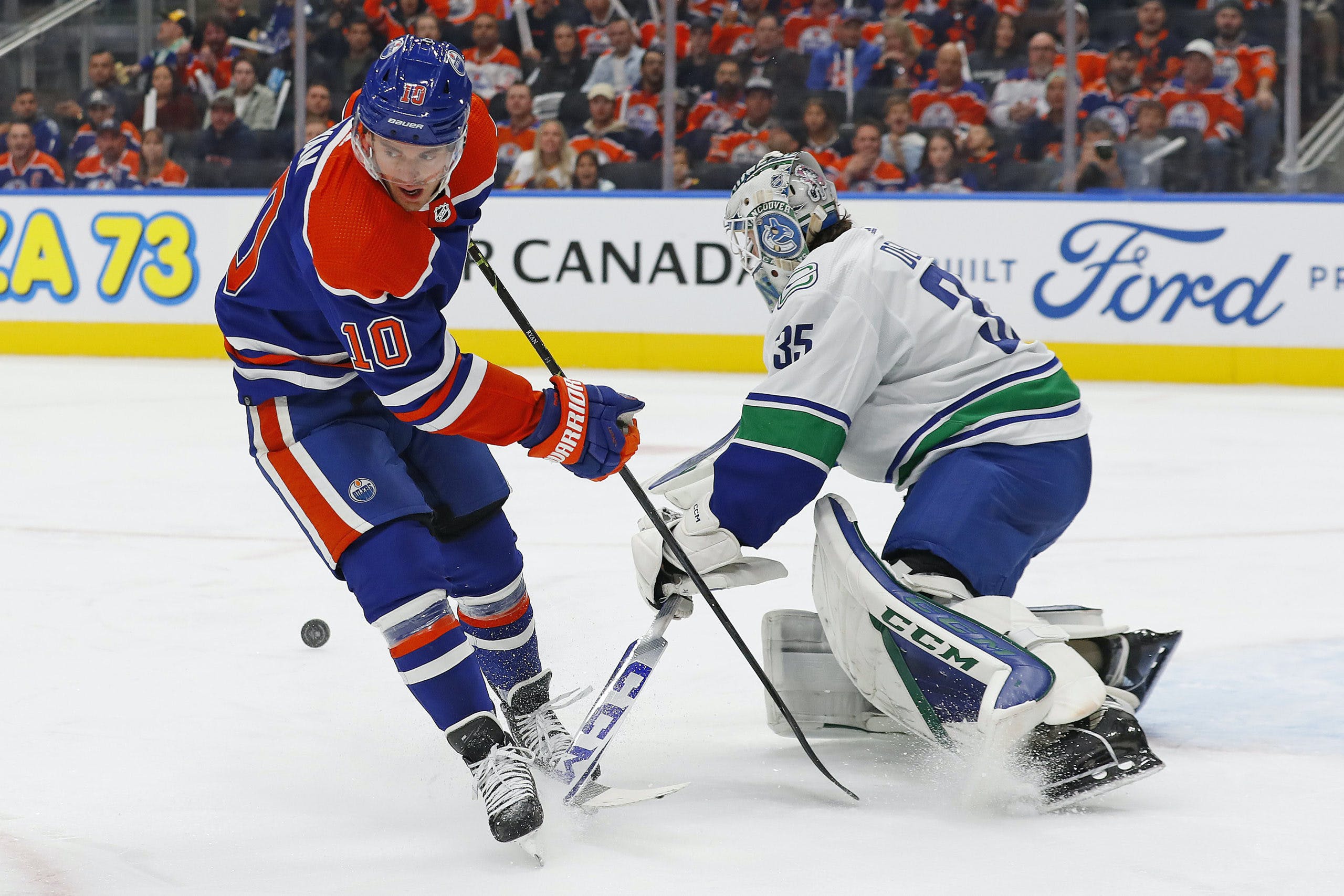 Photo credit: © Perry Nelson-USA TODAY Sports
By Michael Liu
3 months ago
Comments
It started so well.
After going up 3-0 early in the second, the Canucks conceded five unanswered markers to lose to the Oilers 5-3 in their season opener.
To quote The Killers, “how did it end up like this?”
It’s a result that’s sure to sting, so let’s take a look at what lay underneath the result analytically.
As always, you can find our glossary guide of advanced stats here.

It really is painful to look at this game flow chart. The Canucks controlled most of the game both in terms of possession and expected goals. Really, the only time they lost their advantage was in the final few minutes, when they went to the penalty kill with just over 2 minutes left in the game. Edmonton scored against the flow of the game, which is something that happens, but not something that should happen four times in one game.
Advertisement
Ad
Advertisement
Ad
Vancouver looked like they came to play in the first period. They were skating, attacking, and defending well. It never felt like the Canucks were outplayed at any point, but rather that the mistakes added up to concede the goals against. It also doesn’t help that the Oilers have a very potent power play that they put to full use. 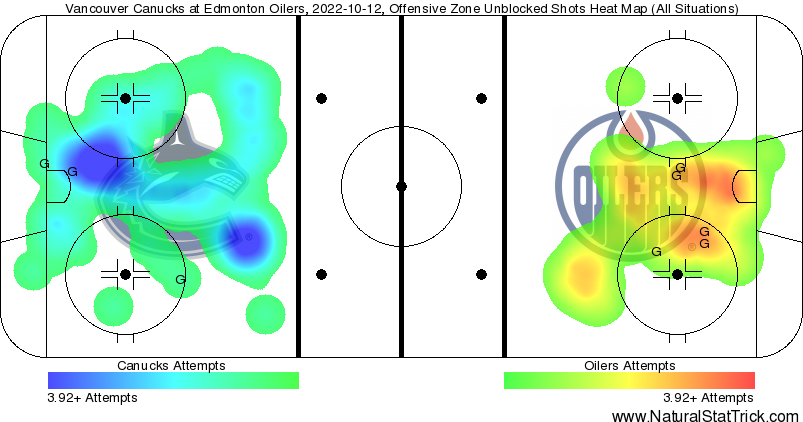 There’s not really much to say here. The Canucks got their chances where they wanted them to come from, and so did the Oilers. The difference is that Edmonton capitalized on theirs while Vancouver didn’t. If there is something to remark, it’s how the Oilers really seemed to funnel their shots into that slot area between the hashmarks. The Canucks seemed to be a little better defending against that than in preseason, as there isn’t a deep red patch there indicating a high density of shots. That being said, the result is all that matters here.
Advertisement
Ad
Advertisement
Ad

Corsi Champ: Last night’s award easily goes to Andrey Kuzmenko. The Russian’s regular season debut went as well as it possibly could’ve, tallying his first career NHL goal with an effective game to boot. Kuzmenko led the team with an impressive 86.84 CF%, putting him at a 46.30 CF% rel. With that possession came 18 scoring chances, 8 of them being high danger while conceding no high danger chances against.

Kuzmenko looked switched on all game and fit alongside Elias Pettersson seamlessly. It’ll be interesting to see if he sticks with Petey on the wing as the season goes along.
Corsi Chump: Dakota Joshua, on the flip side, did not have such a glowing game on the Corsi front. He came dead last with a 11.11 CF%, going with a dismal -49.08 CF% rel. Essentially, the Canucks controlled the puck 50% more with him off the ice than on. It’s a shame, because early on, the fourth line looked to be a solid and understated part of why Vancouver was up 3-0. Instead, we’ll all remember Joshua for getting bodied by Jack Campbell.
Advertisement
Ad
Advertisement
Ad

xGF: To no one’s surprise, Andrey Kuzmenko also leads the Canucks in the xGF department. The winger had an excellent 95.52 xGF%, putting him at a 67.20 xGF% rel compared to the rest of his team. Kuzmenko posted a team-low 0.09 xGA to go along with all of this, suggesting that he was able to suppress most chances against as well.
I do want to shout out Kyle Burroughs here too, even if he doesn’t take home the xGF award last night. His 84.24 xGF% was second on the team, not just because of his xGF of 0.84, but also because of his xGA of 0.16, leading all defencemen in that category. It was a solid game from the depth defenceman, which hopefully bodes well for the future.
GSAx: Thatcher Demko had some incredible saves last night. He looked sharp and in mid-season form with his reactions and cross-crease robberies. That all being said, his goals saved above expected was not the greatest last night. Demko posted a -1.52 GSAx, owing mainly to the Oilers’ lack of true high-danger chances. Out of the four goals that he gave up, two were high-danger and two were middle-danger facing eight high-danger shots and 10 middle-danger shots. It wasn’t the best outing statistically, but Demko performed adequately behind his team.
Advertisement
Ad
Advertisement
Ad

Idk if this is hyperbolic but I think we're witnessing Stop 1 on the Thatcher Demko Vezina Tour. #Canucks pic.twitter.com/OuxgCl46Am

Kuzy-Petey-Hoggy: Bruce Boudreau might’ve found himself another line combination to run with in the future. Kuzmenko’s exploits have been mentioned previously in this article, but Pettersson also had himself a good game too with the first goal of the season coming off his stick. Pettersson finished 3rd on the team in CF% (70.45) while Höglander was second (75.00). The line altogether posted a CF% of 81.66, an xGF% of 92.34, and generated 6 scoring chances in total together. On the topic of Höglander, the Swede didn’t have the best of first periods, but his puck possession ability allowed him to find a groove on this line. It was the Canucks’ most effective unit all game, and with Ilya Mihkeyev still out for a bit, this line might stick together for a while.
Advertisement
Ad
Advertisement
Ad
The one where the Canucks defence wasn’t actually that bad: In a game where Vancouver gave up a 3-0 lead, defence should be the first thing that’s dissected upon. But… for the most part, the defence wasn’t terrible. Rather, outside of Quinn Hughes (16 scoring chances against), the D corps gave up 10 chances or less, for an average of 6.8 per defenceman. The other five defenceman also conceded an average of two high-danger chances against as well, which is not that bad considering the opposition.
For context, Edmonton’s defence averaged 9.66 scoring chances against per defenceman, with 3.16 of them being high-danger. This is probably one of the best-case scenarios for the Canucks when it comes to their back end, especially when they’re missing two staple pieces in Tyler Myers and Travis Dermott. Attention should be paid to the team defence as a unit instead for this game, where the forwards might not have been as sharp in their own zone as they should’ve been.
Advertisement
Ad
Advertisement
Ad
Nils Åman, McDavid stopper: Okay, maybe not, but Åman did pretty good against the best player in the world. In 5:15 minutes against McDavid, he conceded zero shots against while putting up an even Corsi (50.00 CF%). It’s a bright spot in an otherwise unremarkable debut, showing a little why Boudreau trusted his defensive game so much throughout the preseason. Åman played the second-most minutes against McDavid by a centreman, even exceeding Bo Horvat who had previously been matched up against him.

CF% – 56.25% HDCF% – 54.55% xGF% – 49.47%
The Canucks had the balance of possession and had better chances throughout this game. 8 powerplay opportunities will do that for any team. However, they suffered through their mistakes, giving up goals against the flow of the game to choke away a 3-0 lead. Vancouver will look to rebound on Saturday against the Flyers in Philadelphia, with their first afternoon puck drop of the season.
Advertisement
Ad
Advertisement
Ad
Stats provided by naturalstattrick.com