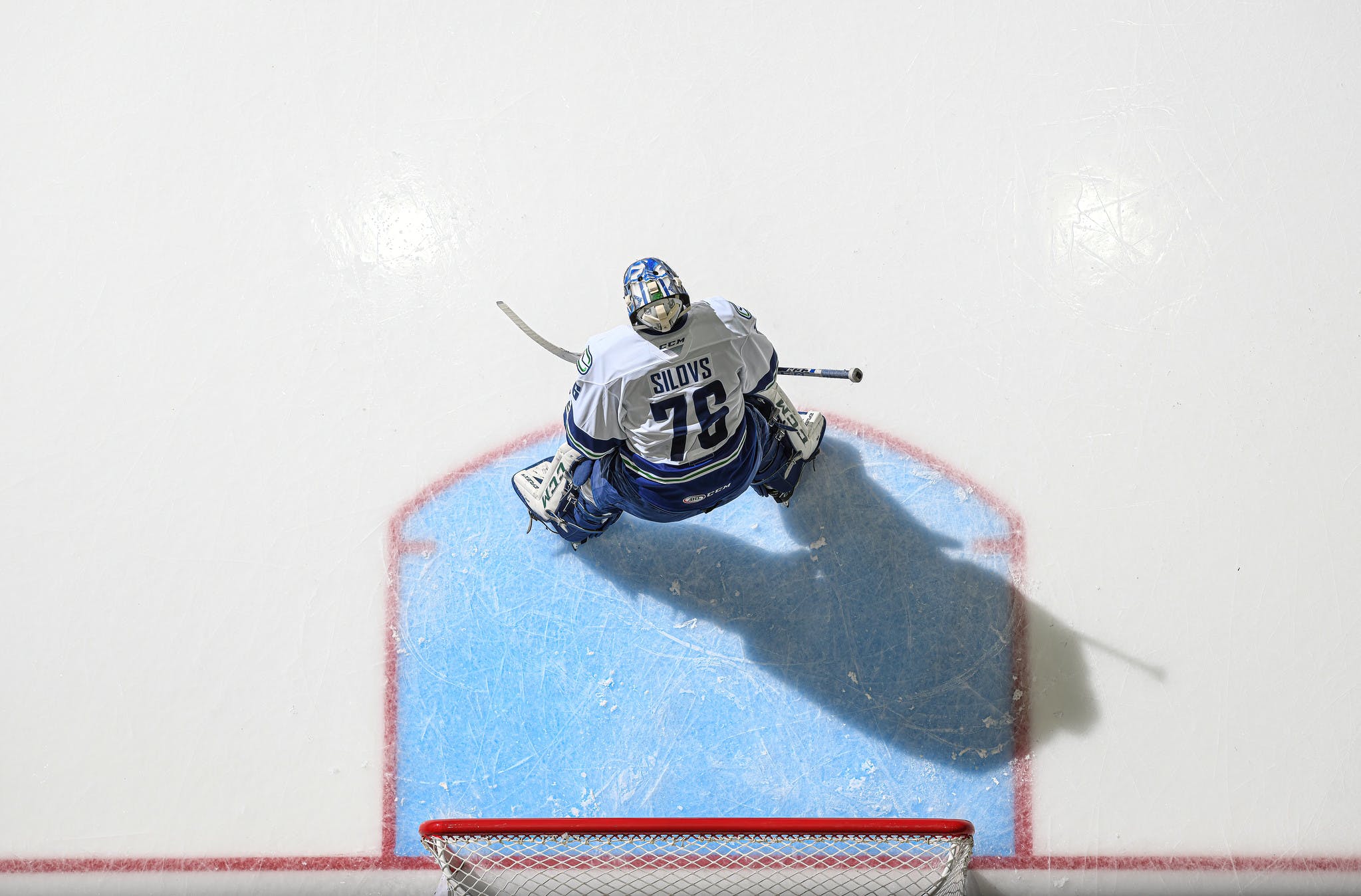 Photo credit: Abbotsford Canucks on Twitter
By Cody Severtson
1 month ago
Comments
Talk about a season turnaround for the Abbotsford Canucks!
Through their first 15 games played, the Farm put up a perfectly average record, going 7-7-0-1 for a .500 points percentage. During that time, the Canucks outshot opponents 313 to 298, but were outscored 30 to 26 at 5v5. Across all situations, Abbotsford was outscored 52 to 44.
Over their last 14? The Farm has gone 11-2-1-0 for a .821 points percentage! During that span, they’ve outshot opponents 328 to 265 and outscored them 40 to 24 at 5v5. Across all situations, Abbotsford outscored opponents 63 to 38!
What changed?
We’re not saying it’s all because of one player or inciting moment. But, the second Jeremy Colliton reunited Danila Klimovich with Chase Wouters and Arshdeep Bains, the team’s offence did begin to click across four lines. 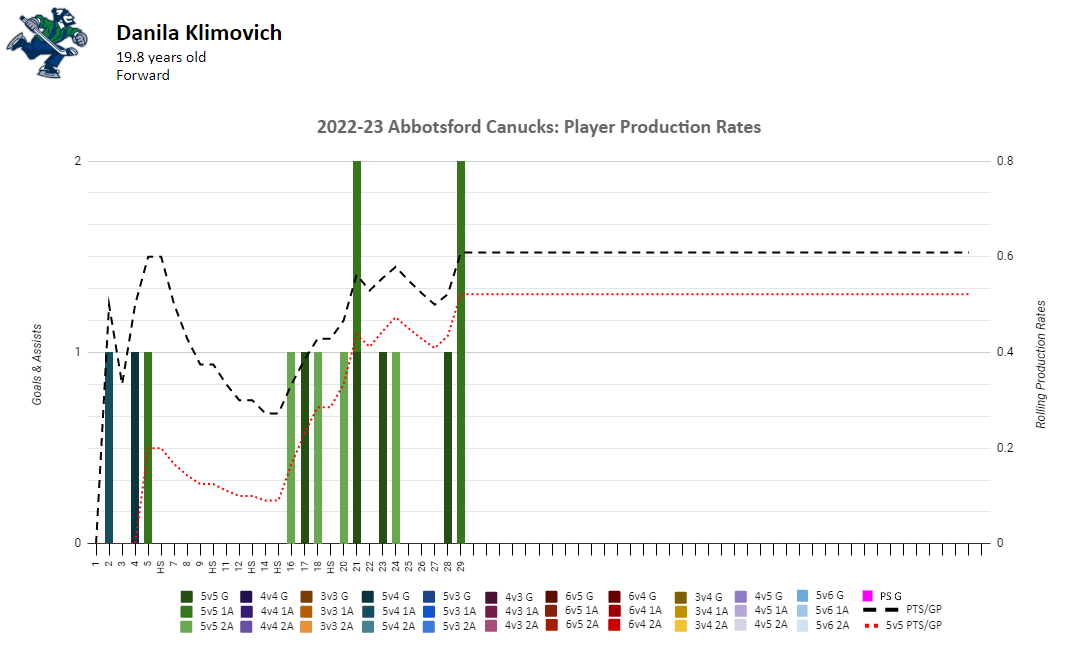 Since a spate of healthy scratches, Danila Klimovich has been a near-point-per-game player — 4 goals, 3 primary assists, and 4 secondary assists, all at 5v5 — without any time spent on the power play or penalty kill!
Advertisement
Ad
Advertisement
Ad
In the AHL, not being on special teams can be a death sentence for a player’s production rates, as a lot of game time is spent on special teams. The Abbotsford Canucks have been shorthanded 106 times while on the man advantage 131 times, roughly three to four of each per game. It doesn’t sound like much, but those 16 minutes disrupt line rotations at 5v5 and impact who plays after special teams time concludes. Depending on the present game state (trailing, ahead, even etc.), a fourth-line player like Klimovich, who is trying to earn the trust of his coach, could be stapled to the bench for half a period without it being reflective of their actual performance.
For example, in Abbotsford’s game against the San Diego Gulls, the third period saw both teams combine for nine minutes worth of penalties, meaning Klimovich only played about two minutes worth of shifts as a non-special teamer.
Advertisement
Ad
Advertisement
Ad
Fortunately, within those paltry minutes, Klimovich kept his head up and found a way to contribute.

sheesh what a snip pic.twitter.com/XYqDzEWTB2

The Farm’s ability to generate consistent 5v5 offence from their bottom six, even in such limited minutes, has dramatically boosted their ability to win and dominate opponents.

After Danila Klimovich's 3rd healthy scratch, #Canucks have articulated a development plan to Klimochich agent Dan Milstein : "I am happy with the plan going forward for Danila. We have not asked for a trade, he will not play for another team or go to junior."

The plan is nebulous, but whatever it is, it’s working. Klimovich’s improved two-way play has far-reaching effects, including the positive impact on frequent linemate Chase Wouters’ season. 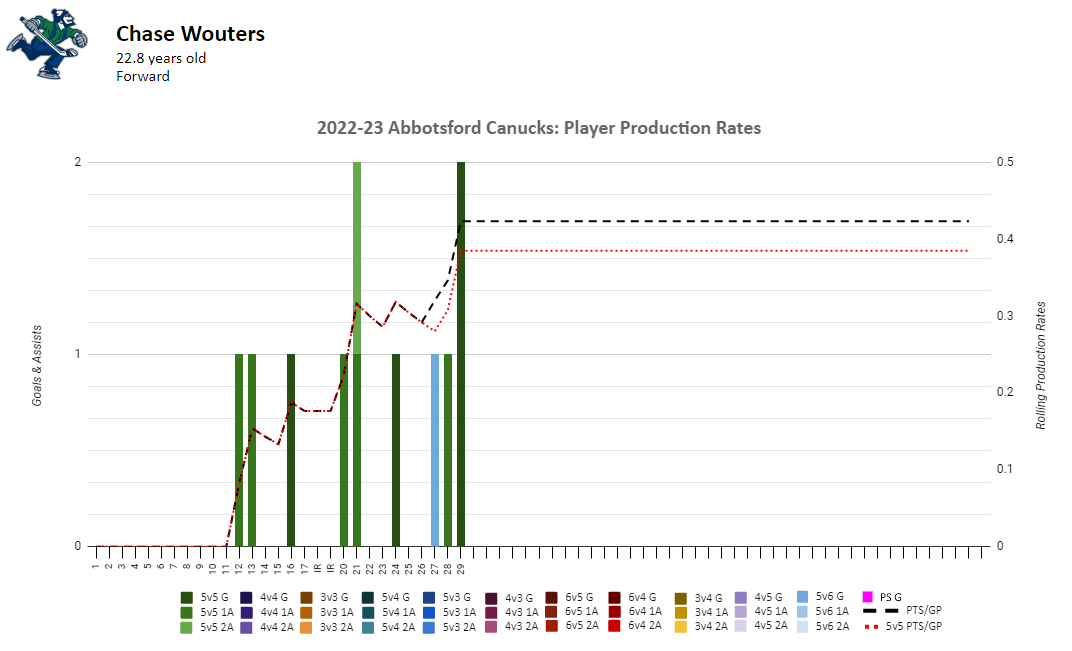 Since the reunification of 2/3rds of the DAWG line, Wouters went from having just two points in his first 15 games — 2 primary assists — to picking up 9 points over his last 12 games in the form of 5 goals, 3 primary assists and 1 secondary assist. Of Wouters’ last 9 points, Klimovich has earned points on six.
Advertisement
Ad
Advertisement
Ad
Klimovich’s season turnaround has been nothing short of remarkable; His improved two-way game, coupled with the production spillover effect on his linemates, has contributed heavily toward the Canucks resurgence through late November and December.
Klimovich and his teammates now face their biggest task: a gruelling four-in-six schedule beginning with two games against the Western Conference-leading Calgary Wranglers.
Before we preview Abbotsford’s series against the Calgary Wranglers and the Henderson Silver Knights, let’s see how we did with our week 12 predictions!

We predict the team will come out strong after their long layoff to win the Friday game. However, the quick turnaround and the potential back-to-back starts for Arturs Silovs will result in another disappointing ho-hum loss on New Year’s Eve.

How nice to be wrong!
Even with Arturs Silovs starting back-to-back games, the Farm delivered another incredible defensive effort by holding the Manitoba Moose to only 15 shots on goal. Though Silovs still gave up 2 goals, the Canucks came up big with a high-scoring comeback performance to close out 2022!
Advertisement
Ad
Advertisement
Ad

Despite their leaky goaltending, the Farm has provided their netminders with one of the cushiest defensive environments in the AHL. Through 29 games played, the Farm has been shorthanded the 6th-lowest number of times and conceded the second-fewest shots per game in the league.
Advertisement
Ad
Advertisement
Ad
Only two teams have registered 35 or more shots on Abbotsford this season, the second-place Calgary Wranglers and the 24th-placed Laval Rocket.
Fortunately, the back-to-back losses against the Wranglers preceded the Canucks’ current hot streak. Maybe this series will be closer than expected.
The Wranglers enter this series on a six-game win streak and are 9-1-0-0 over their last ten.

Despite their lowly position in the Pacific Division standings, the Henderson Silver Knights have been a tough out for the Abbotsford Canucks.
Three of the Canucks’ four games against the Silver Knights have been one-goal games, with their most recent meeting marking the lone time this season that the Canucks have been held off the scoreboard.
Through four games this season, the Silver Knights have been outshot 134 to 106 across all situations, 99 to 80 at 5v5, but have the Canucks beat in goalscoring, 9 to 7.
Advertisement
Ad
Advertisement
Ad
Not much has changed since their last meeting. Henderson still holds the second-worst on-ice shooting percentage and second-worst power play but still sits pretty with the second-best penalty kill in the AHL.
The Silver Knights are 5-4-0-1 in their last ten and will have a one-off meeting against the San Jose Barracuda before their Friday/Saturday double-header against Abbotsford.

Through December, the Canucks toned down their tendency to win games they should probably lose, while losing games they should probably win.
They’re overdue for another week of weird results. Add in the likelihood of Arturs Silovs playing all four games with their busiest stretch to date. Baby, you’ve got a weird result stew going!
Therefore, we predict 4 points against the Calgary Wranglers and a single point against the Henderson Silver Knights on home ice.
Advertisement
Ad
Advertisement
Ad