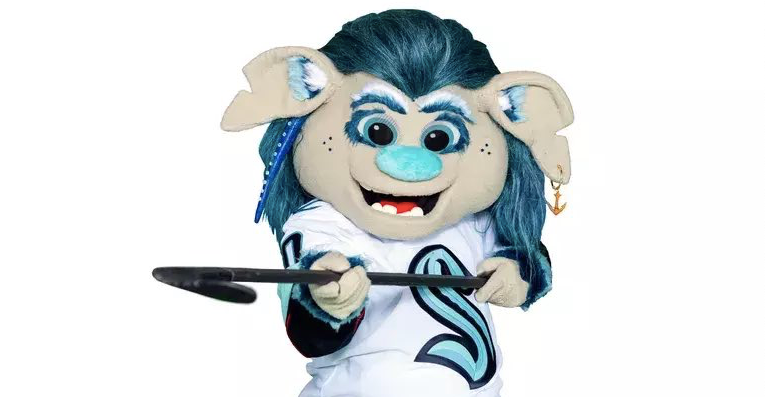 By David Quadrelli
2 months ago
Comments
Prior to puck drop against the Vancouver Canucks in the clubs’ second preseason meeting against one another, the Seattle Kraken debuted their new mascot in delightfully bizarre fashion.
The Kraken shared their new mascot — named Buoy — with their home fans for the first time by suspending him from the rafters and lowering him to the ice while he danced in the air, and no, we’re not kidding:

Buoy’s look is inspired by the Fremont Troll, a well-known public sculpture in the Fremont neighbourhood in Seattle. Here’s a better look at Buoy, including further details on his look:

“Buoy’s hair is a nod to hockey flow and the waves of Puget Sound. You’ll notice there is a removable tooth just like a hockey player, an anchor earring for our secondary mark and then a mysterious tentacle indicating an encounter with the Kraken." #SEAKraken pic.twitter.com/B991HouLj5

Advertisement
Ad
Advertisement
Ad
The Kraken also released this video, which includes their “mascot search” with the mayor of Seattle making a cameo, along with some local athletes, including MLB pitcher Paul Sewald of the playoff-bound Mariners.

The reaction to Buoy so far has been a mixed bag, with some fans liking the design, and some making their displeasure loudly known.

What the heck am I looking at this is horrendous

Fire whoever thought of this

I was so excited and now I'm so disappointed. 😒🦑

Y’all had one job. It’s literally in your name. Kraken. Swing and a miss on this one, holy cow.

We finally know the real story of what Brandon Tanev sees in the team photos. pic.twitter.com/mjetY0MRDq

guys this is terrible

But hey, not everyone liked Gritty at first, either.
What do you think of the Kraken’s new mascot? Let us know in the comments section below!