Advertisement
Ad
Scenes from morning skate: Pettersson moves to the wing as Canucks welcome Flames back to Vancouver 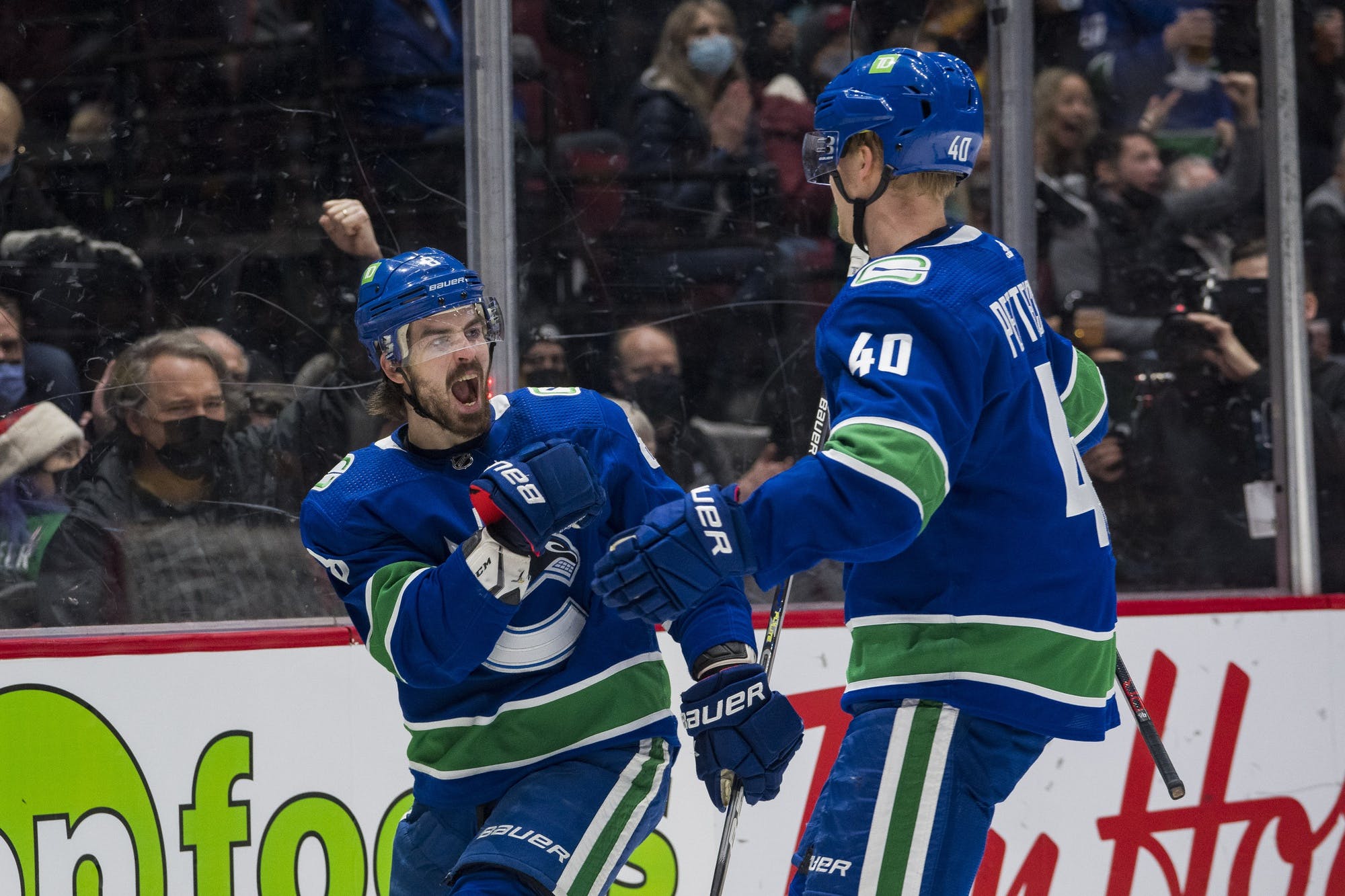 Photo credit: © Bob Frid-USA TODAY Sports
By Lachlan Irvine
8 months ago
Comments
With two games left before the NHL Trade Deadline and a frustrating 1-0 shutout loss to Red Wings in the rearview mirror, the Vancouver Canucks are hoping to keep their dreams of a winning homestand alive, as the Pacific-leading Calgary Flames make their return to Rogers Arena.
The Flames are also fresh off an aggravating 1-0 loss on Friday to the Buffalo Sabres after a Jacob Markstrom gaffe led to the Tage Thompson overtime winner. With Markstrom having faced 34 shots yesterday, Dan Vladar will likely get the nod in net against Thatcher Demko.
Can the Canucks drop nine goals on the Flames without the Flying Skate jerseys? Let’s see!

With a few players potentially playing their final weekend of games as Canucks, the team is rolling out a more top-heavy lineup to try and match the Flames’ scoring depth.
Advertisement
Ad
Advertisement
Ad

#Canucks lines and pairs at morning skate Saturday, this is your projected lineup vs. Calgary on Hockey Night in Canada:

One interesting change is Elias Pettersson’s shift to the left wing, placed on a line with Bo Horvat and Conor Garland. With the Canucks struggles to score against Alex Nedeljkovic and the Red Wings, Boudreau has elected to move Nic Petan and Alex Chiasson down the lineup to get his top six’s scoring touch back on track.
Nils Höglander is once again out of commission with a groin issue, and according to Bruce Boudreau after Thursday’s game, is expected to remain out of the lineup until at least Monday.

Forward Matthew Highmore said that while he doesn’t expect the Canucks to put another 9-1 win together against the Flames, the confidence that game gave the team is something he feels they can feed off of against Calgary tonight.
Advertisement
Ad
Advertisement
Ad
“Knowing that we’re capable of something like that, of a performance like that, we have to draw on that,” Highmore said. “But that being said, you can’t get complacent and think it’s gonna be the same way because you know that they’re gonna want to come out and put their stamp on the game early.”
Defencemen Tyler Myers was asked about him and Oliver Ekman-Larsson’s struggles as a pair against Detroit on Thursday and feels getting back to the basics will be key.
“For [OEL] and I, it’s a matter of talking, and I think when we’re at our best we’re breaking the puck out well,” Myers said. “We just need to make sure we focus on supporting each other and having good sticks like we have all year.”
Head coach Bruce Boudreau was asked about Demko’s workload and said that the lack of a reliable backup goaltender isn’t a major concern for him with a playoff berth in the team’s sights.
Advertisement
Ad
Advertisement
Ad
“We’re pretty sure that Demko is the number one guy, and he’s the guy that every team has,” Boudreau said. “We’re not in a position right now where we can give up any point, so we’ve got to play the best we can play.”
The Canucks and Flames hit the ice at 7:00 PM Pacific, with Hockey Night in Canada carrying the game across CBC, Sportsnet Pacific and Citytv.