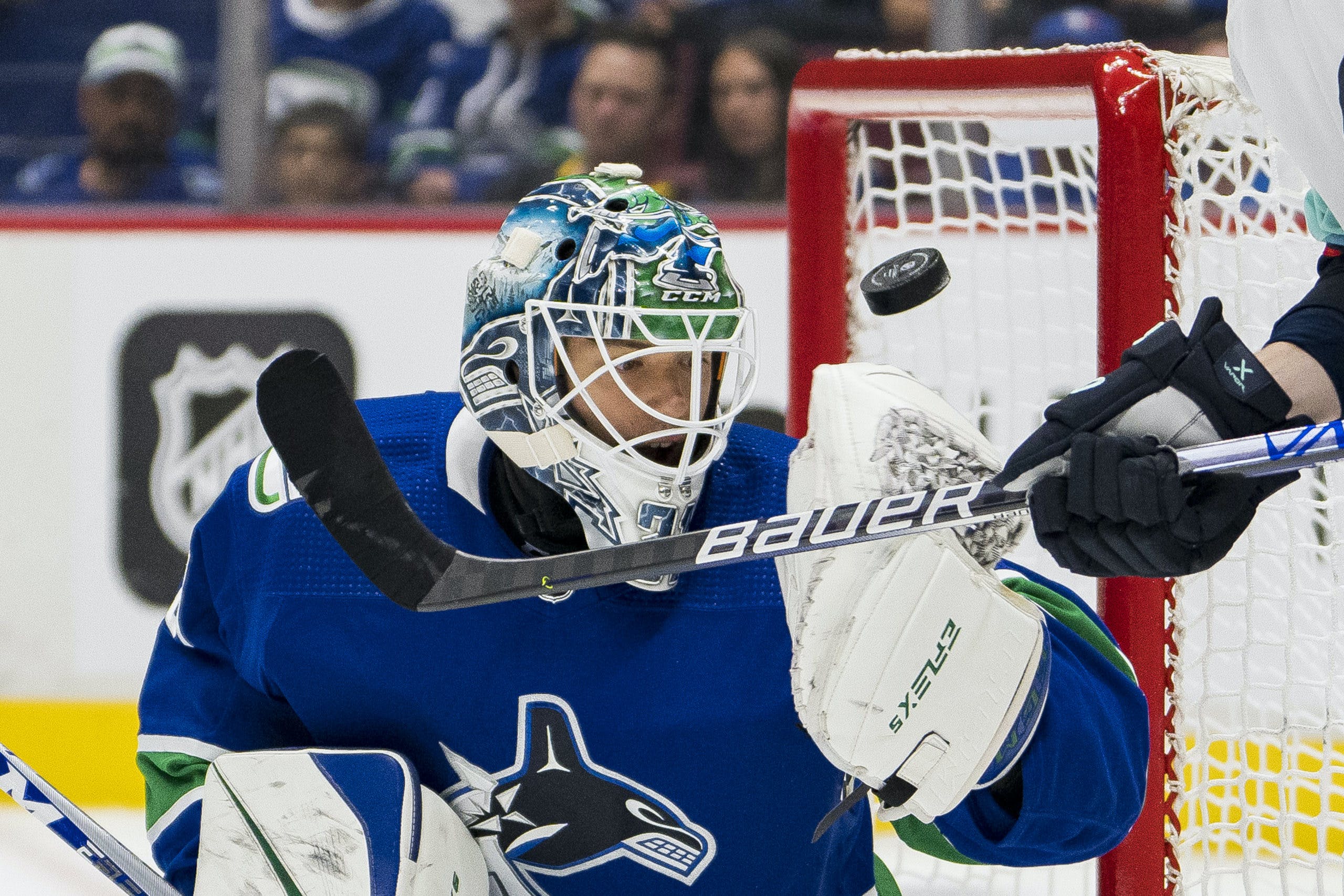 Photo credit: © Bob Frid-USA TODAY Sports
By David Quadrelli
3 months ago
Comments
If you’re considering placing a bet on when the Vancouver Canucks will pick up their first win of the preseason, we’d suggest not choosing to do so tonight.
Today, the Canucks fly out to Edmonton to take on the Oilers for their fifth game of the preseason before flying back out to Edmonton next week for their regular season opener on October 12th.
In that regular-season opener, there’s a good chance you’ll see the Oilers ice a lineup similar to the one we expect to see them go with tonight:

The same certainly can’t be said for the group the Canucks are sending out to Edmonton this evening:

While the Oilers are looking to tune up their NHL roster and let players like Dylan Holloway, Tyler Benson, and Jake Virtanen fight for jobs, the Canucks are sending some bonafide AHL skaters — with some NHL players sprinkled in — to Edmonton tonight.
Danila Klimovich is expected to skate on a line with Jason Dickinson and Curtis Lazar, while Sheldon Dries serves as the pivot between Conor Garland and Vasily Podkolzin on the Canucks’ expected top line.
Advertisement
Ad
Advertisement
Ad
The Canucks don’t have a ton of centre depth, and Dries could very well find himself serving as a pivot for one of the Canucks’ top three forward lines should a centre go down this season.
Tonight’s preseason game serves as a good chance to get him, and some of the Canucks’ other depth options this season, some experience against an NHL-calibre lineup.
Former Canuck Jake Virtanen will be in the Oilers’ lineup tonight, but based on what we’ve heard from fans in Edmonton, there’s a good chance you wouldn’t have known that to be the case if we hadn’t just told you.
Christian Wolanin had a strong game on Saturday night and gets another shot tonight on the Canucks’ first pairing. He’ll get to face NHL competition and prove he can defend at the next level
Advertisement
Ad
Advertisement
Ad
Arturs Silovs and Collin Delia — who gets the start — will share netminding duties tonight as free agent signing Jack Campbell mans the crease for the Oilers.

J.T. Miller may be getting the night off tonight, but that didn’t stop him, along with Elias Pettersson, Bo Horvat, Andrey Kuzmenko, Quinn Hughes, Oliver Ekman-Larsson, and Thatcher Demko, from getting in a good skate this morning out at UBC as they prepare for the regular season.
Miller commented on the Canucks’ NHL lineup on paper, and how things need to be different this year.
“It’s an attractive lineup on paper,” said Miller. “It’s been an attractive lineup for years since I’ve been here. It’s a matter of doing it and raising our compete level and raising the standard and expecting a lot out of ourselves every game and holding ourselves accountable.
Advertisement
Ad
Advertisement
Ad
“It should be part of our everyday business here.
“We’ve been really excited for this year to happen, but at the same time, I think training camp and preseason seem to take forever… [We’re] just trying to come together every day and get better every day. It’s super cliche, but it’s all we’re focused on at the moment.”
Bruce Boudreau briefly talked about his lineup tonight and what he’s looking for from his group in Edmonton.
“I just think it’s the hard work and the stuff that we’ve learned,” Boudreau said. “The positional play, the little things that we’re working on, for example, faceoffs today and [our play] in our own zone, I mean, those are the things you want to see if they’re getting through.”
Puck drop is at 6 PM Pacific tonight from Rogers Place in Edmonton.
Advertisement
Ad
Advertisement
Ad