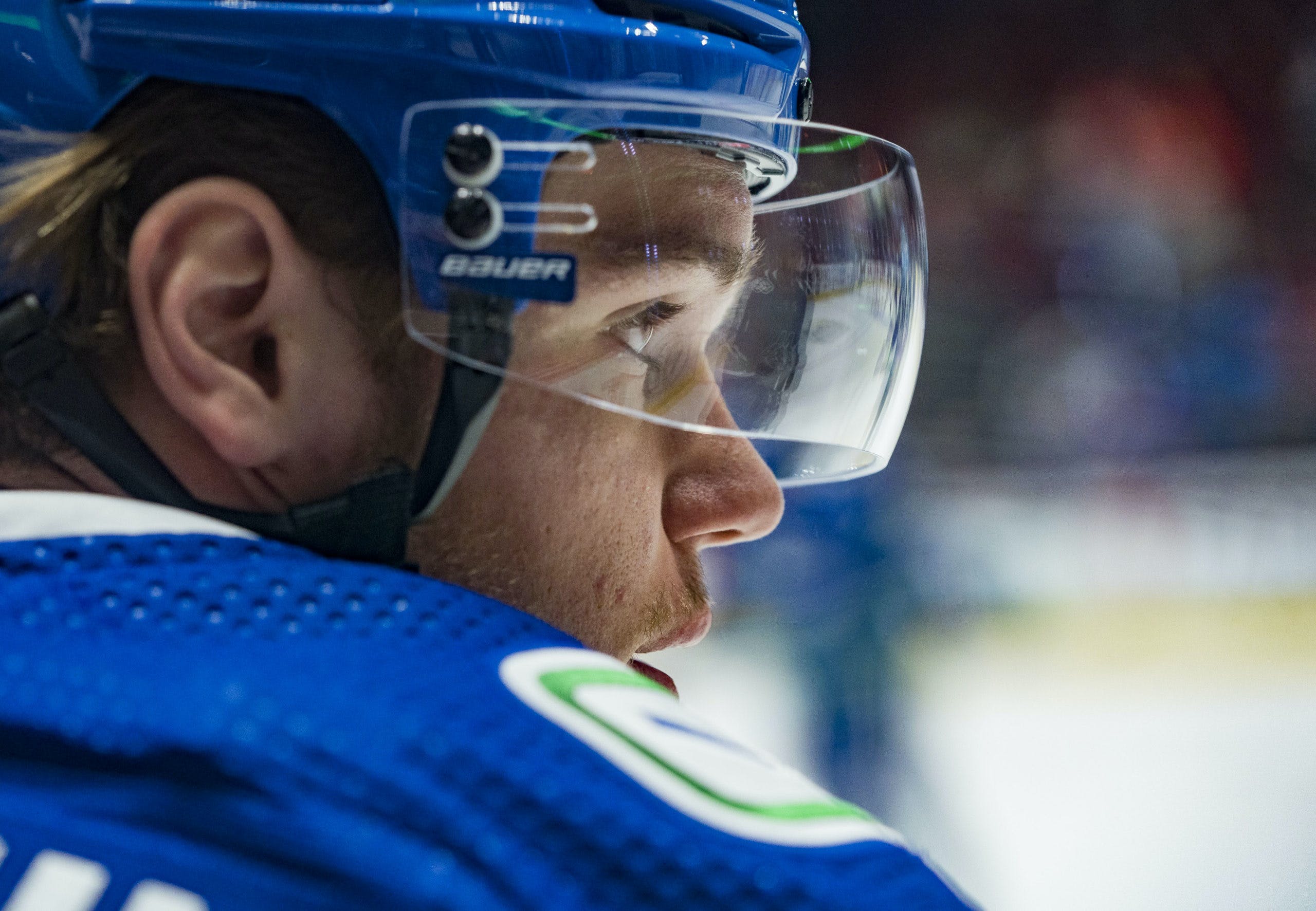 Photo credit: © Bob Frid-USA TODAY Sports
By David Quadrelli
1 year ago
Comments
The Vancouver Canucks’ first homestand has been less than ideal.
As the losses continue to mount, all the talk has been about the Canucks’ poor special teams. Their power play has gone 1-20 on this homestand, and their penalty kill has been almost just as dreadful.
Special teams made the difference on Friday night against Nashville, and everyone in that room knows they have to be better
Tonight, the Canucks welcome the Dallas Stars into town for game five of their six-game homestand.

Here’s how they lined up at morning skate today:

Lines at morning skate for the #Canucks

Head coach Travis Green confirmed that Thatcher Demko will start in goal tonight. Green wouldn’t confirm whether or not Justin Dowling would make his return to the lineup, but based on line rushes, it’s probable that he’ll return.
The 5-on-5 lines remain rather unchanged. It’s the power play units that, rightfully so, should be getting all the attention right now.
Advertisement
Ad
Advertisement
Ad
There are few words to describe just how dreadful the Canucks’ power play has looked, and it’s dominating the discourse for good reason.
The Canucks shook up their PP units a bit today. Here’s how they lined up:

The main change to the first unit is that Quinn Hughes is back at the top of the umbrella and Bo Horvat is back in the bumper position in place of Oliver Ekman-Larsson and Conor Garland, respectively.
The big story of the day is that Alex Chiasson has been removed from the lineup altogether, opening up a spot on the power play.
Vasily Podkolzin is finally being given an opportunity to play on the man advantage, and lined up in the bumper spot on the second unit today.

Bo Horvat remembers what it was like being a young player learning the power play. Horvat says it took him about a full year to learn the bumper position in particular.
Advertisement
Ad
Advertisement
Ad
“There is an art to being in the middle a little bit, to know where to go and hit those holes,” said Horvat. “I think [Podkolzin’s] smart enough to know that and I mean, he’s got a lot of good hockey players on his unit that are gonna be able to find him. He’s got probably one of the hardest shots on our team, so if they can get it to him, it’s probably gonna be in the net.”
J.T. Miller talked about the importance of not panicking and continuing to do the right things in hopes that the results will start to come.
“We should treat it a lot like five on five,” said Miller. “You’ve got to be assertive, you got to get pucks back, win your battles, and you got to execute. Like, it’s not much different — and this group of five feels confident together. We need to get a little swagger back in our unit.”
Advertisement
Ad
Advertisement
Ad
Travis Green talked about what Podkolzin can bring to a power play unit.
“There are a lot of little nuances that go into playing in any spot on the power play that he maybe hasn’t done before. But the thing about pods, is you can tell he pays attention, he knows that there are areas that he needs to improve in. He takes it seriously wants to become better.”
“Eventually, he’ll end up playing somewhere — net front guy or maybe a bumper, we’re not sure yet. I think the player we see today is going to be different than the player we see in 10 games, who is going to be different than the player we see at the end of the season.”
The Canucks are desperately hoping that their special teams come to play tonight as they try to salvage what’s left of this homestand.
Advertisement
Ad
Advertisement
Ad
Puck drop is at 7 PM from Rogers Arena tonight.