Advertisement
Ad
Scenes from morning skate: Canucks not changing a thing as they try to build on .500 with Minnesota Wild in town 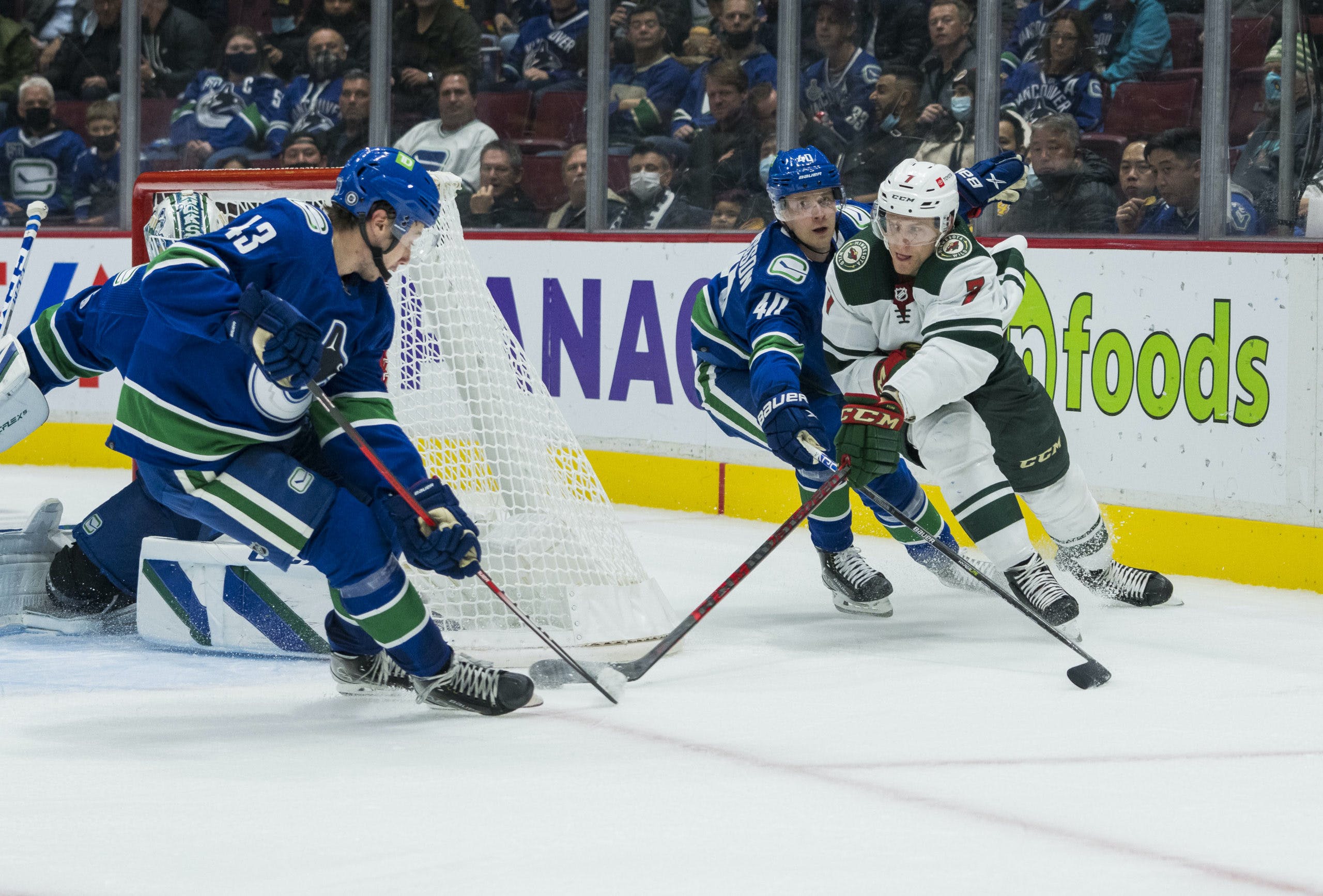 Photo credit: © Bob Frid-USA TODAY Sports
By Faber
1 month ago
Comments
Welcome to scenes from morning skate brought to you by NHL betting odds site Betway!
There’s no rollercoaster like following the Vancouver Canucks.
Rumour on the street is that John Wardley tried designing a rollercoaster to imitate the emotions that following this team brings, but he was denied due to safety reasons.
The Canucks are now a .500 team. This came after going winless in their first seven games of the season.
Getting to .500 comes on the heels of beating some bottom-of-the-barrel teams, but the players don’t make the schedule, they just take to the ice and attempt to take care of business. Of late, the Canucks have been taking care of business — picking up wins in eight of their last 11 games and simultaneously getting themselves back into the thick middle of the NHL. The Canucks are currently 23rd in the league for points percentage.
Advertisement
Ad
Advertisement
Ad
The Minnesota Wild, who are in town tonight to battle the Canucks, post a 13-11-2 record and are sitting in third place in the Central Division. The Wild won six of seven before beginning their Western Canada swing with losses to the Oilers and Flames.
Last night, the Wild fell to the Oilers by a score of 5-2 and will play on back-to-back nights as they come through Vancouver to wrap up a four-game road trip. The Wild are 2-0 this season when playing on the second night of back-to-backs and are surely going to be a team that gives the Canucks some trouble.
They are led by their 25-year-old Russian star, Kirill Kaprizov, who has 34 points in 26 games. Their defensive star from the forward group Joel Eriksson Ek is a tough matchup for whichever Canucks top-six line will matchup against him. 21-year-old Matt Boldy is coming into his own this season, with nine goals and nine assists through 26 games.
Advertisement
Ad
Advertisement
Ad
The good news for the Canucks is that they likely won’t be facing Marc-Andre Fleury, who played last night in Edmonton. Fleury has been dominant against the Canucks in his career, but they dodged a bullet as backup Filip Gustavsson is expected to get the call to the crease at Rogers Arena. Gustavsson is no slouch in his own right, posting a .909 save percentage and a 2.75 goals against average over his eight starts this season.
Now that we got the tidbits out of the way, let’s get into what we saw and heard at the morning skate.

There were no changes to the Canucks’ lines or defence pairings at Saturday’s morning skate.

It looks like Riley will Still be the man on the third pairing alongside Tyler Myers.
Advertisement
Ad
Advertisement
Ad
Brock Boeser continues to skate with Elias Pettersson and Ilya Mikheyev.
Sheldon Dries looks like the odd man out as Jack Studnicka will continue to roll as the third-line centre.
Nils Höglander stays with Bo Horvat and J.T. Miller in a top-six role.

The Canucks will ride Dakota Joshua’s hot hand as he stays on the second power play unit.
Andrei Kuzmenko will remain as the net-front human puck deflector for Pettersson.

Spencer Martin getting the “starter’s chat” from Ian Clark. pic.twitter.com/RDCtbkLJfU

Spencer Martin was getting the “starter’s chat” from goalie coach Ian Clark just before he left the ice.
No player took the skate off as all players were accounted for.

Curtis Lazar spoke about team defence.
Advertisement
Ad
Advertisement
Ad
“We are always looking for ways to improve and I think the big thing for us is always just team defence,” said Lazar. “Our goals for and against here over the past 11 or so games — it’s been exciting is one way to put it, but that’s not the recipe to win long-term and I think we know that so we need to buckle down and buy into the team defence more and it should lead to even more opportunities offensively. We have a lot of guys here that know how to put the puck in the net but if we can really see that buy-in on the defensive side would be a much better team.”
Bruce Boudreau talked about tonight’s opponent.
“Well, I know we’re going to expect a really difficult game.,” said Boudreau. “They’re a hard-working team. They’re big, they’re strong and they’re probably going to come in here a little angry. They’re an upper-echelon team, so, I mean, we know we have to put our best foot forward. We can’t play as loose as we did the last couple of games and expect to win if we’re against these guys.”
Advertisement
Ad
Advertisement
Ad
Boudreau was also asked about how important this game is for setting the tempo for an upcoming week that doesn’t have a lot of games on the schedule.
“It’s really important because, for the next three days, we’re not going to be able to gain any points and teams will be gaining points because they’re playing. So I mean, when you do have the games, you’ve got to take advantage of it and tonight’s one of those games where we just have to take advantage of it and just keep creeping up a little closer and closer and when we get there we get there.”
The Wild and Canucks are the final game on Hockey Night in Canada tonight and the game is scheduled to begin at 7:00 pm.