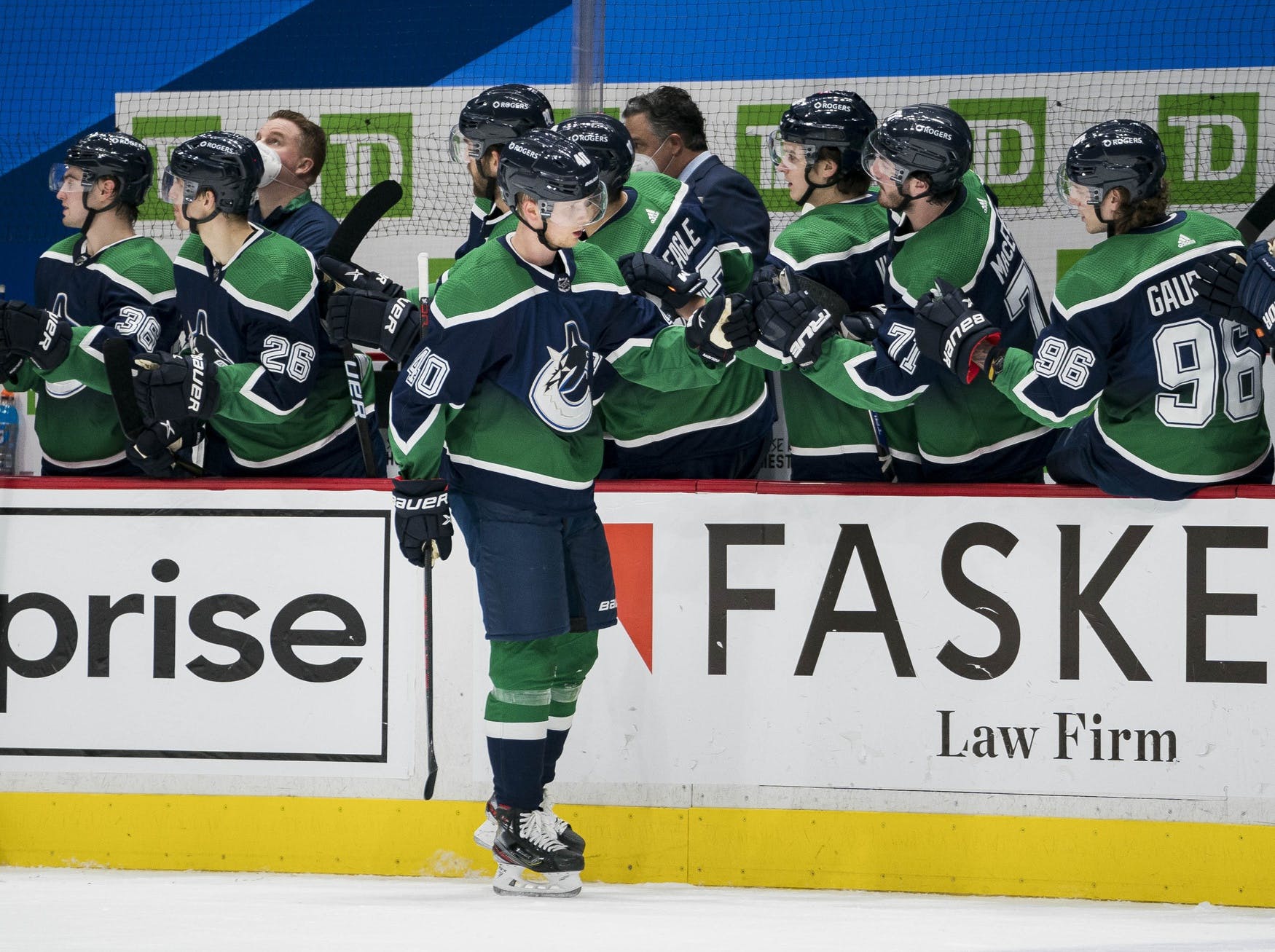 Photo credit: © Bob Frid-USA TODAY Sports
By Stephan Roget
1 year ago
Comments
At the time of this writing, and following a two-game sweep at the hands of the Winnipeg Jets, the Vancouver Canucks sit with a record of 8-12-2.
On the one hand, that means that the Canucks are only four wins away from .500 hockey, and they’re also a scant three points out of a playoff spot. But the Canucks have also played the most games in the league, and said playoff spot is currently held by the Montreal Canadiens, a team with five games in hand on the Canucks.
From NHL.com
By the time the Canucks complete their next three two-game series, they’ll have hit the halfway mark on the season. Which means, as some are already pointing out, that it could already be well past do-or-die time in Vancouver.

What’s devastating about a loss to WPG on Sunday in which the #Canucks probably deserved better? That it wasn’t devastating at all. Not really.

The loss has a marginal impact on their playoff odds one way or the other.

This wasn’t catastrophic, the catastrophe was weeks ago.

Most oddsmakers would agree, with the Canucks clocking in at a sub-10% chance of making the 2021 postseason on all the major bookkeepers.
As in, if the Canucks aren’t already out of the playoff picture, they will be soon — barring, of course, a back-half run of epic proportions.
Advertisement
Ad
Advertisement
Ad
So, let’s err on the side of positivity and start mapping out what such an epic run might look like.

What it’s going to take

There are differing opinions on what exactly it will take to make the playoffs in the 2021 North Division, but we can definitely narrow it down to a relative range.
Currently, and measuring by point-percentage to account for the disparity in games played, the Edmonton Oilers hold down the fourth spot in the division with a .600 record.
Last year, the average point-percentage of a fourth-place team in any of the four divisions was .573.
So, it’s fairly safe to assume that the fourth-place team in the North Division will have a point-percentage somewhere between those two numbers. Both of which, for the record, are higher than the .565 the Canucks snuck into the postseason with in 2019/20.
Advertisement
Ad
Advertisement
Ad
That lines up with some of the preseason predictions of various pundits, including Thomas Drance.

I suspect teams are going to need 63 points or so to get into the playoffs.

To get there at this point the #Canucks would need to win their next 4 in a row vs. Winnipeg and Edmonton.

It could also end up being a low estimate, given the presence of the Ottawa Senators in the division, and the fact that playing nine or ten games against them should juice everyone else’s record a little bit. But let’s ignore that, because even this low estimate represents a significant climb from the .409 the Canucks are rocking in the current moment.
So, can they get there?

A final point-percentage of .573 would require the Canucks to finish with 64 points. A final percentage of .600 would require them to finish with 67.
Right now, they’ve got 18. To get anywhere near those magic numbers, the Canucks will have to capture at least 46 of the 68 possible remaining points. That’s a point-percentage of .676 from here on out, with no room for error.
Advertisement
Ad
Advertisement
Ad
No problem, right? Let’s count those points out, starting with those that should theoretically be easiest to claim.
The Canucks have six games remaining against the Senators, including a four-game series in late April. Vancouver has a perfect record against Ottawa thus far, and that will have to more-or-less continue if the Canucks want to stay in the playoff picture, especially since every team they’re competing with for a spot will also be facing off against the Senators with regularity.
Let’s say that the Canucks sweep the March series and then win three of four in April. That gives them ten points right there.
Next up are the Calgary Flames. Through six games thus far, the Canucks have claimed five of a possible 12 points. That’s going to have to improve through the final four matchups. If the Canucks can win both of their one-game specials against the Flames, and split that two-game April series, they’ll pick up another six points.
Advertisement
Ad
Advertisement
Ad
If the Canucks can put both the Senators and Flames firmly in their rearview mirror, they’ll just have to worry about beating out the Oilers for that final spot. With eight games to go between Vancouver and Edmonton, and each a proverbial “four-point game,” it is here that the Canucks’ playoff hopes will truly sink or swim. And going well over and above that .676 rate that they’re trying to maintain in this particular matchup will go a long way toward solidifying their chances.
If the Canucks can win six of eight against the Oilers, having already split the first two-game series, they’ll earn another 12 points, and take a sizeable chunk out of the lead Edmonton currently holds over them.
Which just leaves 18 points to acquire through 16 games against the Jets, Canadiens, and Leafs. Easier said than done, but certainly not impossible. To get there, the Canucks would need to go 9-7, which doesn’t sound too bad, until you realize that, thus far, the Canucks have earned three of a possible 22 points from these three teams.
Advertisement
Ad
Advertisement
Ad
Here, improvement is undoubtedly needed.
If the Canucks split their remaining six games against the Jets, they’ll split the season series exactly and pick up another six points.
Six more games against the Leafs, who shellacked the Canucks in three straight, will prove considerably tougher. Here, splitting won’t be good enough. Vancouver will want to win four of six, giving them another eight points and presumably doing wonders for team confidence.
Then come Tyler Toffoli and the Montreal Canadiens, bane of the Canucks’ 2021 existence. Vancouver has only won a single game against the Habs this season, and that came in overtime. With only four more cracks at it, all occurring in March, the Canucks are going to have to figure out this particular problem, and soon.
Three wins in four games gets them those last six points. But, again, that would require them to completely reverse the trend they’ve established thus far, and is a lot easier said than done.
Advertisement
Ad
Advertisement
Ad

The epic run to the playoffs, summarized

In short, the Canucks are going to have to split or win every single one of their remaining season series to make the playoffs. If they lose one of them, they’ll have to absolutely pancake one of the other teams to compensate. And if they don’t win the right games — as in, those against the teams they’re competing with for that fourth seed — they could hit 64 points and it still won’t matter. If too many of those wins come in overtime or the shootout, they’ll run into a similar problem.
Either way and no matter what, they’ll have to put together an epic, 46-point run through their final 34 games, with a record looking something like 21-9-4. Give or take.
To put it differently, the Vancouver Canucks are NOT out of the playoff picture quite yet, but getting there is going to require one of the greatest runs in team history.
Advertisement
Ad
Advertisement
Ad
And we do mean “team history.” The last time the Canucks finished a season with a record anything like that, it was 2011, when they went 25-9 in their final 34 games.
More recently, but less locally, there’s precedence that might give the fanbase a tiny flicker of hope. In 2019, the St. Louis Blues went from last place in the league to a playoff spot — and eventually a Stanley Cup — after ending their season on a 29-6-4 run.
Do the 2021 Canucks carry the same potential for a season-saving, turnaround streak?
Only time will tell. But, if they do, they better start showing it soon, because the playoff picture is already pretty ugly and, just like Dorian Gray, it’s getting uglier by the day.