Advertisement
Ad
Passes from Henrik and the pronunciation of Elias Pettersson: Scenes from day one of Canucks development camp 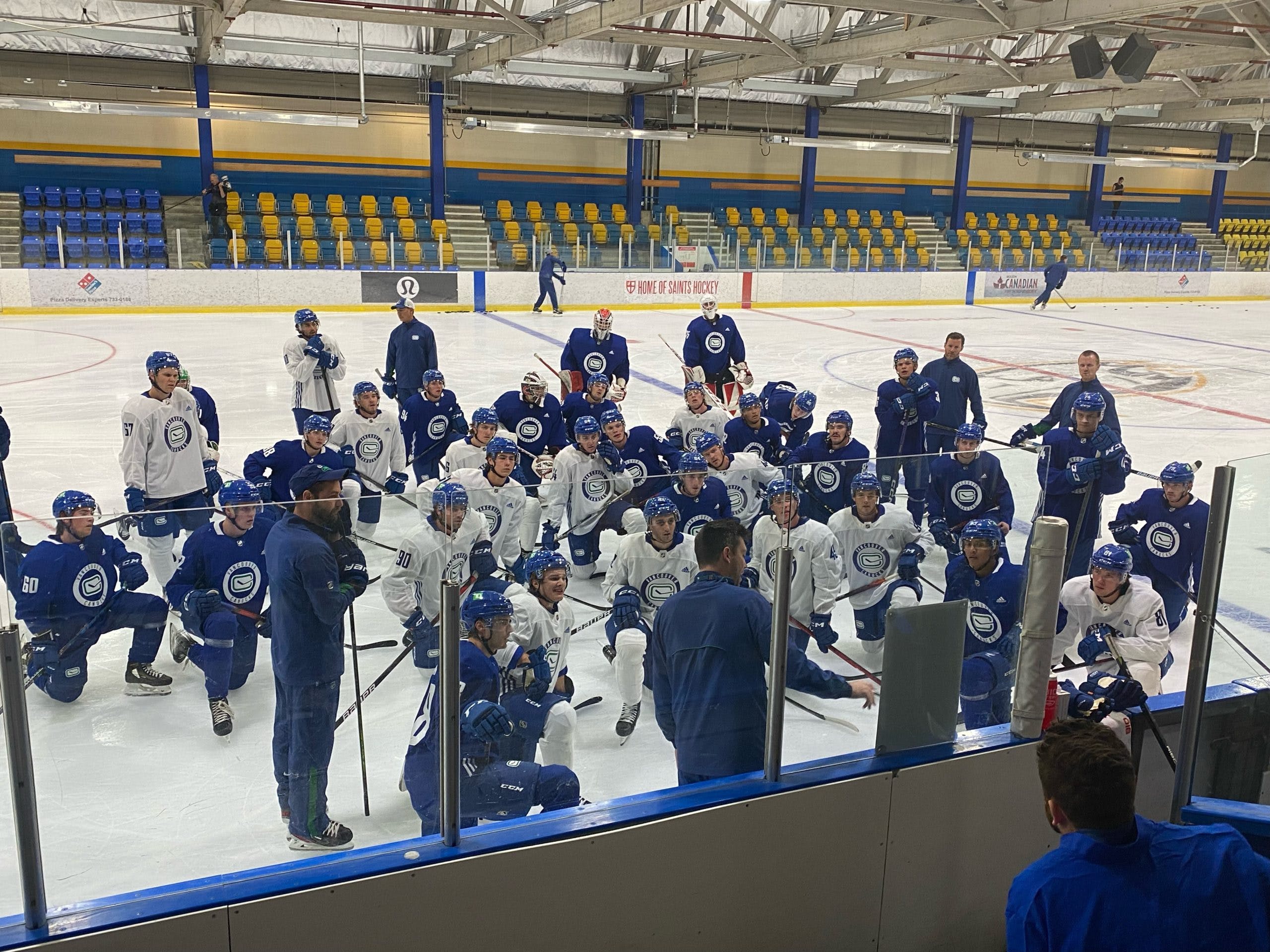 Photo credit: CanucksArmy
By David Quadrelli
6 months ago
Comments
It’s been a while since we did a “scenes from”, because, well, there hasn’t been any Canucks on-ice activity in months!
But today, that all changes, because we were out at UBC in the Father Bauer Arena watching the Canucks’ prospects up close in person.
Here’s what we saw.

As expected, the goalies were some of the first players to take the ice, with Aku Koskenvuo and Ty Young heading out to get some work in with goaltending coach Ian Clark.
Naturally, I walked down to the side they were working at, and got the goods of what was being taught to the Canucks’ prospect netminders.
First, Clark explained the rationale of the three-stance system, and went on to explain the shuffling technique that is used when the puck is being swung around the boards to up high at the blue line.

Ty Young impressed early on, as the willingness to learn new concepts from Clark and apply them right away appeared strong.
Advertisement
Ad
Advertisement
Ad
That’s always a good thing to see from a young project goaltender, who later on told CanucksArmy that he considers himself to be someone with a high work ethic.
“That’s kind of I think one of the reasons why I was getting looked at to get drafted and stuff was just because my coachability and work ethic to get better is pretty high. So my movement and technical stuff may not be the best right now, but I think my coachability is pretty good right now.”
Those two goalies stayed on the ice for the duration of the defenceman being on the ice, facing shots off drills.
I was also very impressed by what I saw from Koskenvuo, who is committed to play for Harvard next season.

The first group out was the defencemen, and the player who caught our attention most was Jonathan Myrenberg, who the Canucks selected in the fifth round in last year’s draft.
Advertisement
Ad
Advertisement
Ad
Myrenberg moved well with the puck, and was bigger than we remember.
Early on, the right-shot Swedish defenceman is high on our list of players to watch closely this week.
We also witnessed a hearty battle between Viktor Persson and the newly drafted Elias Pettersson.

Most of the drills the defence took part in revolved around puck-moving and transitional play, but included some battle drills in which Henrik Sedin sauced pucks between two defencemen to battle for possession of.

#Canucks appear to be trying to find the next Alex Burrows at development camp pic.twitter.com/DiWsJuOJkN

“They are icons in Sweden, and in the whole world,” said Elias Pettersson — who said today that he wants his name pronounced uh-LYE-uss — when asked what it was like to get to work with the Sedins.
Pettersson was also briefed by media on what the Grouse Grind is, as Ryan Johnson informed us shortly before that the Canucks’ development camp week would feature a run up the Grind.
Advertisement
Ad
Advertisement
Ad
“Yeah, I heard about it, but I don’t know exactly what we’re going to do — I think we’re going to walk up on a hill?”
Pettersson was quickly informed that there wouldn’t be much walking.

After the defence was out for roughly an hour, they were joined by the forwards, and that’s where we saw a lot more, including — but certainly not limited to — our first look at Jonathan Lekkerimäki on the ice.

It was apparent right away that Lekkerimäki is small in stature, but the qualities that landed him in the top ten of most draft boards were apparent almost instantly. He moves well and has an undeniable cannon of a wrist shot.
There was also a moment where Arturs Silovs wasn’t too pleased with Linus Karlsson digging at a rebound.
Advertisement
Ad
Advertisement
Ad

Linus Karlsson with the rush and a little bump on Arturs Silovs. Danila Klimovich gives him a little push after the play.

Drills are starting to have some good pace here. pic.twitter.com/66tvx2juMT

Another player who shone bright when the second group took to the ice was the aforementioned Elias Pettersson. His wrist shot looked good and he looked bigger than most of the prospects out there.
Pettersson told media that the draft in Montreal was his first time in Canada, and that he thinks Vancouver is a beautiful city so far.
Who do you want us to keep a close eye on this week at development camp? Let us know in the comments section below!
Faber and I recapped more from day one in the video below: