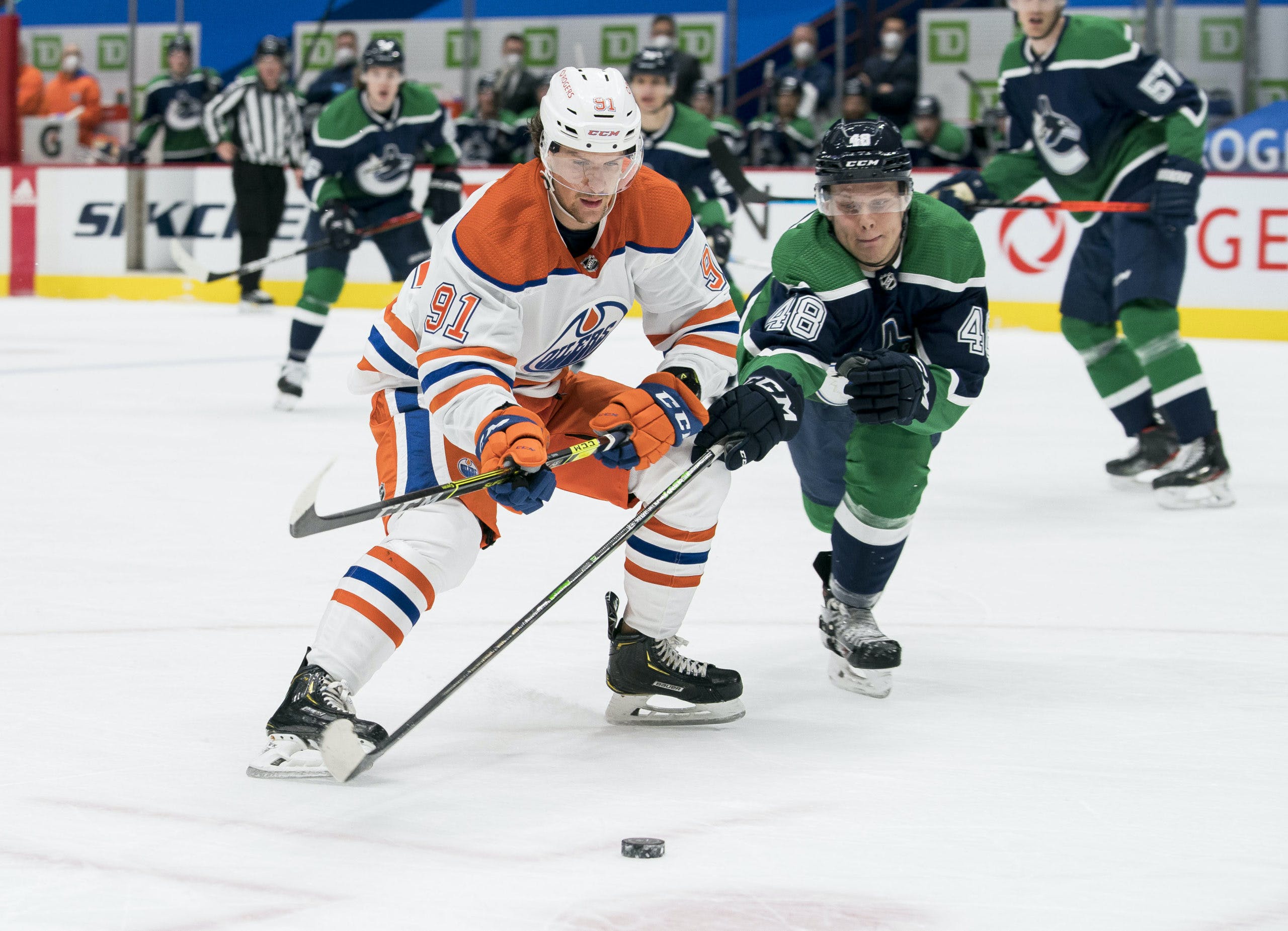 Photo credit: © Bob Frid-USA TODAY Sports
By Faber
1 year ago
Comments
The Vancouver Canucks have been on quite a tear lately. Their goalie and timely goals have resulted in the team going 5-1-0 over their last six games.
Even though the team is winning, Olli Juolevi should be an option for the lineup sooner rather than later.
Through the hot streak, Head Coach Travis Green has gone with four left-shot defencemen (Alex Edler, Quinn Hughes, Nate Schmidt, Jordie Benn) and two right-shot defencemen (Tyler Myers, Travis Hamonic). This sextet has been doing just enough to secure an impressive amount of wins over the past two weeks.
It’s fair to assume that this team is set to regress unless they continue to get the absolute best out of Thatcher Demko every single night. Demko has been the best goalie in the NHL through the month of March. His save percentage is over 0.950% and he has been the top performer for the Canucks in every win this month.
Stats provided by HockeyReference
Advertisement
Ad
Advertisement
Ad
Demko is showing the world that what he did in the bubble wasn’t a one-and-done.
Instead of a short flash in the pan, it was a preview of an evolving young goaltender showing that the time to make him a starter is now.
Night in, night out, Demko deserves to be the winning goaltender. The Canucks can ice a good enough lineup to consistently beat teams in the Canadian division if this type of goaltending consistency can be attained. It’s a big ask, but we don’t have to look back very long to be reminded what a consistent Vezina calibre goaltender can do to this team.

Checking on Jacob Markstrom’s updated #s @csahockey after record-setting, 49-save shutout on Sedin night: leads NHL with +22.06 goal differential (ie. how many he’s saved Canucks based on quality and number of shots), ahead of Rask (15.22), Lehner (14.06) and Hellebuyck (13.76)

It’s really tough to believe that a 0.950% save percentage will be attainable for the remainder of the season. The Canucks will have to ice a better team in front of him to give Demko back some wins on nights where he can’t single-handedly steal two points.
Advertisement
Ad
Advertisement
Ad
One small change that would help the defence core is the movement of Olli Juolevi back into the lineup.
Through the early parts of the season, Juolevi was looking like a high-level bottom pairing defenceman who plays on a losing team.
Compared to the rest of the team’s defencemen, Juolevi has shown well through his 15 games this season. Notable statistics for the numbers folk include his team-best 46.94% Corsi for percentage, 61.54% control of the goal share, 48.23% control of expected goals for and team-low 26.29 scoring chances against at 5-on-5.
To simplify, he has looked fine as a sheltered sixth defenceman who doesn’t get a lot of tough matchups.
He has been able to keep strong control of the actual goals scored and has a team-low of 1.64 actual goals against per minute. In his 182 minutes of five-on-five ice time, Juolevi has only been on the ice for five total goals against. That’s a great stat to have for a young defenceman who has the potential to blossom into a defensive specialist that could one day find himself being trusted in the Canucks’ top four.
Advertisement
Ad
Advertisement
Ad
The tough spot for Juolevi’s statistics is that while on the ice at five-on-five this season, he has been getting Thatcher-Demko-in-March type goaltending. Juolevi’s on-ice save percentage at five-on-five this season is .950 and that puts him above the rest of the Canucks’ defencemen.
The goaltending for Juolevi has been good, as it should be with the way that Juolevi is able to think the game in the defensive end. He is currently blocking 4.6 shots per 60 minutes and was just beginning to look much more comfortable in the lineup before Travis Hamonic’s return sent Jordie Benn onto the left-side of the third pairing on February 25th.
Jordie Benn has been fine in his role as the sixth defenceman of the group. Over this six-game hot streak, Benn has averaged 14:56 of ice time. He has been playing alongside Tyler Myers and holding fine in the goal department, being on-ice for four goals scored compared to three against. Through the past six games, he is averaging 46 seconds of shorthanded ice time. Benn can slide into a second defence pairing on the penalty kill or hold down the fort if one of the main PK defencemen (typically Edler or Myers) takes a penalty.
Advertisement
Ad
Advertisement
Ad
Pucks have been going in when Benn is on the ice, and lately, the ratio has been leaning in the Canucks’ favour. He’s been fine and might continue to be an adequate option for the Canucks’ bottom pairing. He’s proved to be more effective on this Canucks team’s roster than he was last season and that’s certainly good to see. Benn might be the right answer right now, but Olli Juolevi might be the better option depending on how you look at it.
Benn is the veteran. He plays hard minutes and is versatile enough to not only play the right-side but not look out of place alongside Quinn Hughes in a first pairing role.
Juolevi is a young, developing defenceman who has had a tough road to get to this point of getting his NHL shot. He’s told us time and time again that he has never felt better about his body and was becoming increasingly confident on the ice with the team and off the ice with the media over Zoom.
Advertisement
Ad
Advertisement
Ad

"I want to try and play a physical game, I'm a big enough guy to try and play that way." Olli Juolevi talks about his recent play and feeling more confident.#Canucks | @TheProvince pic.twitter.com/Q80e3vSkS0

His defensive style of play matched well with Tyler Myers as his partner. Myers loves to shoot the puck and the entire North Division knows that. Whoever is paired up with Myers gets extra ice to fire shots and Juolevi does an excellent job of getting those shots on net or into dirty areas.

Juolevi likely won’t draw into the lineup soon if this Canucks team continues to win. Travis Green has been consistent in keeping his lineup the same during a winning streak, specifically his defence pairings.
During back-to-backs, it might not be the worst idea to give one of the older Edler, Benn or Hamonic a night off.
There are a lot of “mights” in this article, and the most important one is that Olli Juolevi might be able to continue developing and learning the way to play in the NHL. His ability to sniff out passing lanes and disrupt shooting lanes will be one of the keys to his NHL success.
Advertisement
Ad
Advertisement
Ad
He’s got the right mindset and continues to work to get back into the lineup.

"You want to make the most of your chances and play your best hockey everyday." – Olli Juolevi on pushing for a spot on the roster #Canucks @Sportsnet650

If the Canucks continue to win, I agree with Green that if a specific group is working well enough to get wins in the NHL, then they should be given the shot to do it in the next game. That being said, the time to make this change is during a back-to-back situation. The Canucks have two games against the Montreal Canadiens this weekend and back-to-back games on a Saturday and Sunday to begin the month of April. The back-to-back to begin April includes travel from Edmonton to Winnipeg.
Juolevi would be an energy jolt to a lineup that will likely be tired after each of those two-game sets. Those games will more than likely include Braden Holtby in the net and the addition of an energetic Juolvei could help jolt the team over the top.
Advertisement
Ad
Advertisement
Ad
He will likely have to wait for the team to go on a losing streak or an injury to occur to one of the left-handed defencemen to get in the lineup.
If a losing streak is the reason and the Canucks believe in playing some of their younger players more, Juolevi should be at the top of the list. Kole Lind and Jack Rathbone are in the equation as well but they look to be having a very important development time period in Utica with the Comets. Leaving those two down in the minors to strengthen their skills for the NHL will give them a better chance of sticking in the lineup once they get their shots.
Juolevi is doing more than knocking on the NHL door.
He’s opened the door up, walked in, grabbed a lemonade from the fridge and sat down to enjoy it.
Advertisement
Ad
Advertisement
Ad
It’s very fair to believe that he’s not far off from being an everyday NHL defenceman. There’s a strong argument from the analytics and eye-test that he looks up to the task.
Juolevi still may not have shown his best and young defencemen typically have a tough time adjusting to NHL hockey. Juolevi has adjusted to the league in a respectable manner and deserves to get more opportunities this season to prove himself during his rookie campaign.
This weekend might be the best time to get Juolevi back in the lineup.