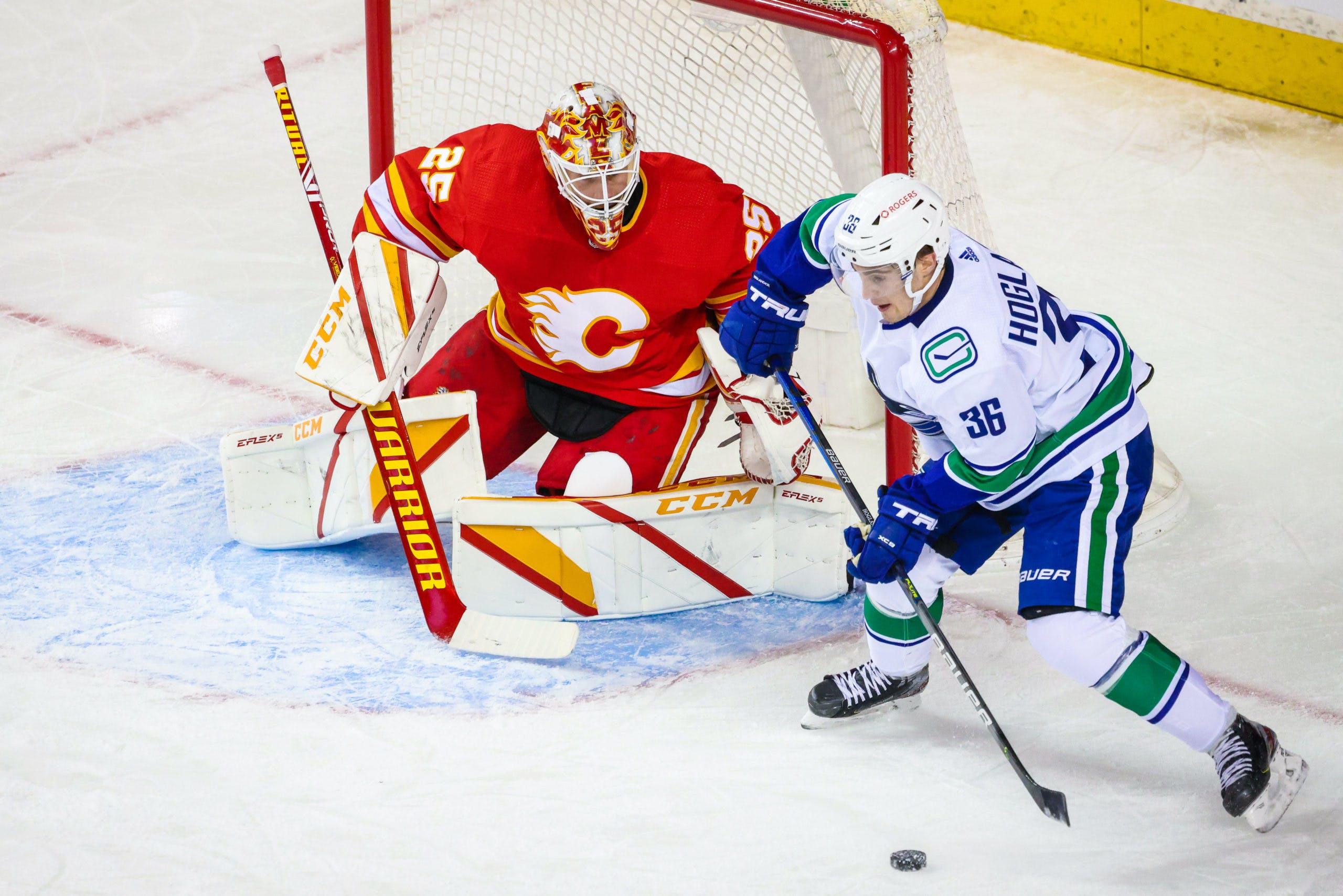 Photo credit: © Sergei Belski-USA TODAY Sports
By Faber
2 years ago
Comments
It’s not a surprise to see everyone talking about Nils Hoglander right now.
The young Swedish winger who turned 20-years-old during his 14-day quarantine in December has secured a spot in the Canucks’ top-six forward group.
He’s the first topic in each conversation about the Canucks, whether it’s on sports talk radio, Canucks related podcasts, blogs, or even just conversations at the workplace if you aren’t at home for your job.
Everyone is talking about Hoglander.
“Hoggy,” as he’s been nicknamed on the ice.
He’s fit right in with Bo Horvat on the second line during drills, scrimmages, and now NHL regular-season games. The locker room seems to enjoy having the young Hoglander around.
“He’s been great,” said Horvat when asked how Hoglander has been fitting in with the group off the ice. “This was his first NHL camp and he’s handled himself really well. Not only on the ice but off the ice, asking questions and just trying to get to know all the guys as best as he can.”
Advertisement
Ad
Advertisement
Ad
They even poked fun at him with some rookie hazing in the shootout during last Saturday night’s scrimmage.

Team Blue was messing with the rookie as he came in on the first attempt. They celebrate when he turns back.

Hoglander is coming over from the SHL after participating in parts of three professional SHL seasons. He has a pretty good knowledge of how a professional league works. He’s got a rundown of what to expect at a pro training camp. He’s also coming into camp after participating in 23 SHL games.
He’s ready to hit the ground running on an NHL second line and Horvat is ready for it.
“He was great,” said Horvat on the first day of camp, “I didn’t know too much about him, (I) just saw him play World Juniors and a couple of TSN highlight-reel goals, but to actually skate with him today was really good. He’s really fast, shifty, and smart with the puck so it was really good to skate with him today.”
Advertisement
Ad
Advertisement
Ad
Hoglander surprised everyone at camp, but surprising everyone is something he does regularly.

Nils Hoglander with the goal of the year today for Rogle! 🥍+🏒=🚨 🤯 pic.twitter.com/IdU8KJGRTG

He’s a wizard with the puck on his stick and with the transition from the larger SHL ice to the smaller NHL-sized rinks, his puck skills have been tested more often. Most of the times that he has been tested, he has passed. Literally and figuratively.

There is clearly some top-six potential in Hoglander’s game. He’s got elite hands and his quick pivots and spins showcase his high-level agility on the ice. The fit with Horvat and Tanner Pearson will be interesting to watch as the NHL regular-season goes on. It shall be interesting to see how much patience and belief Travis Green has with Hoglander. That Horvat line battled all of the toughest matchups on a game-in, game-out basis last season.
Advertisement
Ad
Advertisement
Ad
We will see how Hoglander’s game stacks up when he’s matched up with players like Connor McDavid, Auston Matthews, or Leon Draisaitl. He’s looked fine in drills, scrimmages and now regular-season games but will face his final test now to see if he can stick it out for a full season.
So far, he has passed everything, and just like David Quadrell at BCIT, he has gotten straight “A’s” while doing it.
Hoglander has defended well with his stick and is not shy to engage physically on the boards. The thing about Hoglander is that he’s built solid and is known to be an animal in the workout room. He’s also been a part of three professional seasons. Like I said earlier, he’s got a basic understanding of how a pro season goes.
Advertisement
Ad
Advertisement
Ad
I asked Hoglander about what it was like to have three professional training camps with Rögle under his belt already.
“Of course it’s a boost to come with that behind me,” said Hoglander. “I don’t think it’s that much different from the (SHL) training camps in Sweden. It’s really the same but much shorter.”
I’m optimistic about Hoglander. I’ve tracked a ton of him over the past two seasons and there’s no way I could have predicted that he would be this impressive at camp. He took that momentum into the regular season and has shown that his playstyle translates well to the NHL ice.
He was one of the top 20 in the SHL this season for controlling the share of attempted shots. The one thing I knew he was going to be able to immediately do at this level is to extend plays in the offensive zone.
Advertisement
Ad
Advertisement
Ad

What a play by Nils Höglander!

He gets the primary 🍎assist🍎 on this power play goal after a couple great moves in the offensive zone.

Vancouver Canucks prospects are having a DAY today! pic.twitter.com/1KzklG8LhB

I’ve seen him do some incredible things at the SHL level. The things that this kid will try on the ice make the sport so much fun to watch. He’s doing things we have never seen before and now he is about to be doing spectacular things on an NHL second line.
There were a handful of times where he looked like a superstar in the SHL. His ability to dominate the control of offensive time was remarkable. He does a tremendous job of moving the puck through the neutral zone and he does enough work on the boards in the defensive zone to regain possession.

I wrote this about Nils Höglander earlier this week on @CanucksArmy.

He’s having one of those games where he is by far the best player on the ice today. pic.twitter.com/w9xscvqvQz

Hoglander has been electric in each practice, he’s won a spot on this roster with his play on the ice. Green threw Hoglander right onto the Horvat line on the first day of camp and he has done nothing to show that he doesn’t belong through three games, as he’s even got some twirls alongside Elias Pettersson as the Canucks try to fill the void left by J.T. Miller.
Advertisement
Ad
Advertisement
Ad
Pettersson has been quiet during the last two games, and Hoglander could be the spark plug that helps gets his line going.
All he has to do now is play.
And play he will.

The first of many for Nils Hoglander! Congrats on No. 1, kid. #NHLFaceOff