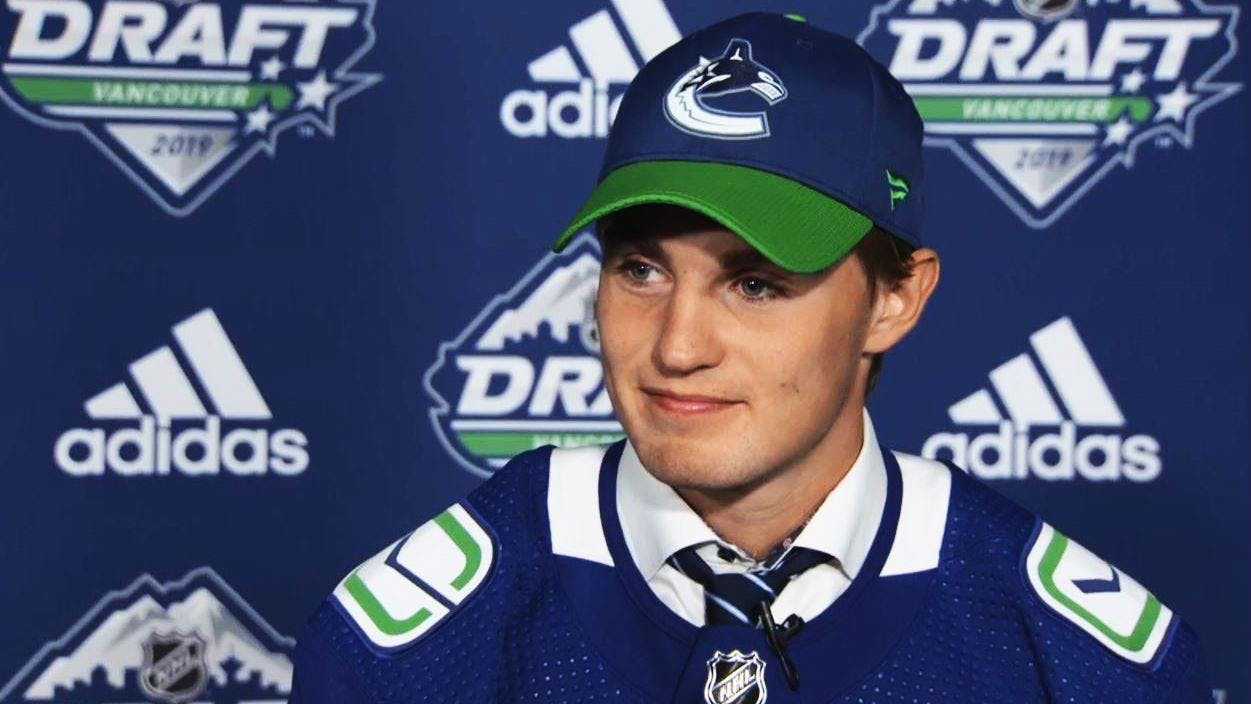 Photo credit: Sportsnet
3 years ago
Comments
Nils Hoglander really impressed the Canucks at Development Camp.
Vancouver’s 40th overall selection in the 2019 NHL Draft was one of the standouts at the team’s development camp in June and is hoping to play for the team by the 2020-21 season, according to NHL.com.
Hoglander reportedly said at the Draft he was even ready for the NHL this fall. The 18-year-old Swedish winger is hoping to follow a similar path of fellow Swedes Daniel and Henrik Sedin and Elias Pettersson. They made the jump to the NHL just one season after being drafted.
Hoglander reportedly had other Canucks prospects gasping in awe at some of his moves at Development Camp. Hoglander, of course, isn’t new to stealing the spotlight. His warmup routine where he juggles while riding a unicycle had the hockey world buzzing ahead of the 2019 NHL Draft in Vancouver.
Advertisement
Ad
Advertisement
Ad

Hoglander earned the praise of fellow prospects and Vancouver’s senior director of player development, Ryan Johnson at the camp. Michael DiPietro told NHL.com that Hoglander pulled off a behind-the-back move in the shootout that he hadn’t seen before.
“Many skated over and said, ‘Wow, this guy is fun to watch,” Johnson said during development camp. “I can say it, but when the other players are talking about it, that’s the ultimate compliment.”
Hoglander has a lethal shot and it led to him potting 14 goals in 50 games with Rogle BK in Sweden last season. But it was other aspects of his game that got the attention of Ryan Johnson at Development Camp.
Advertisement
Ad
Advertisement
Ad
“It’s the finish, but it’s also the power and explosiveness out of corners. He almost plays a reverse physical game,” Johnson said. “If a defender comes at him, he’s not afraid to pop him and explode to the net, which catches people off guard because visually he doesn’t overwhelm you. The power in his legs, and the skill set he has, there’s something special there.”
You can get a look at some of his edgework and 1-on-1 skills in a Development Camp video uploaded by the Canucks YouTube channel. It’s easy to see why many scouts believe the Canucks got a steal at 40th overall.
Hoglander could turn out to be a great top-six forward for the Canucks down the road. He’s a dynamic winger with elite puck skills, strong skating and great offensive talent. It’s also interesting that despite being listed at 5’9″ and 184 lbs, Hoglander has been getting praise for his physical game and playing bigger than he is.
Advertisement
Ad
Advertisement
Ad
Rick Dhaliwal of Sportsnet 650 is reporting Hoglander won’t be participating for Team Sweden at the Upcoming World Junior Showcase and will be using that time to train for the upcoming season. Hoglander told NHL.com that he left Development Camp with instructions to work on his edgework. He also wants to use his shot more this season.

These are big aspirations for a second-round pick, but Hoglander has plenty of promise and could turn out to be a great selection. He’ll be playing in the SHL once again in 2019-20 where he’ll look to build upon his 14-point debut season before potentially turning pro.
Advertisement
Ad
Advertisement
Ad
The Canucks appear to have gotten a good one in Nils Hoglander. You can read more about the pick here. Stephan Roget’s Top 15 Canucks Prospects ranked by NHL Readiness list can be found here.