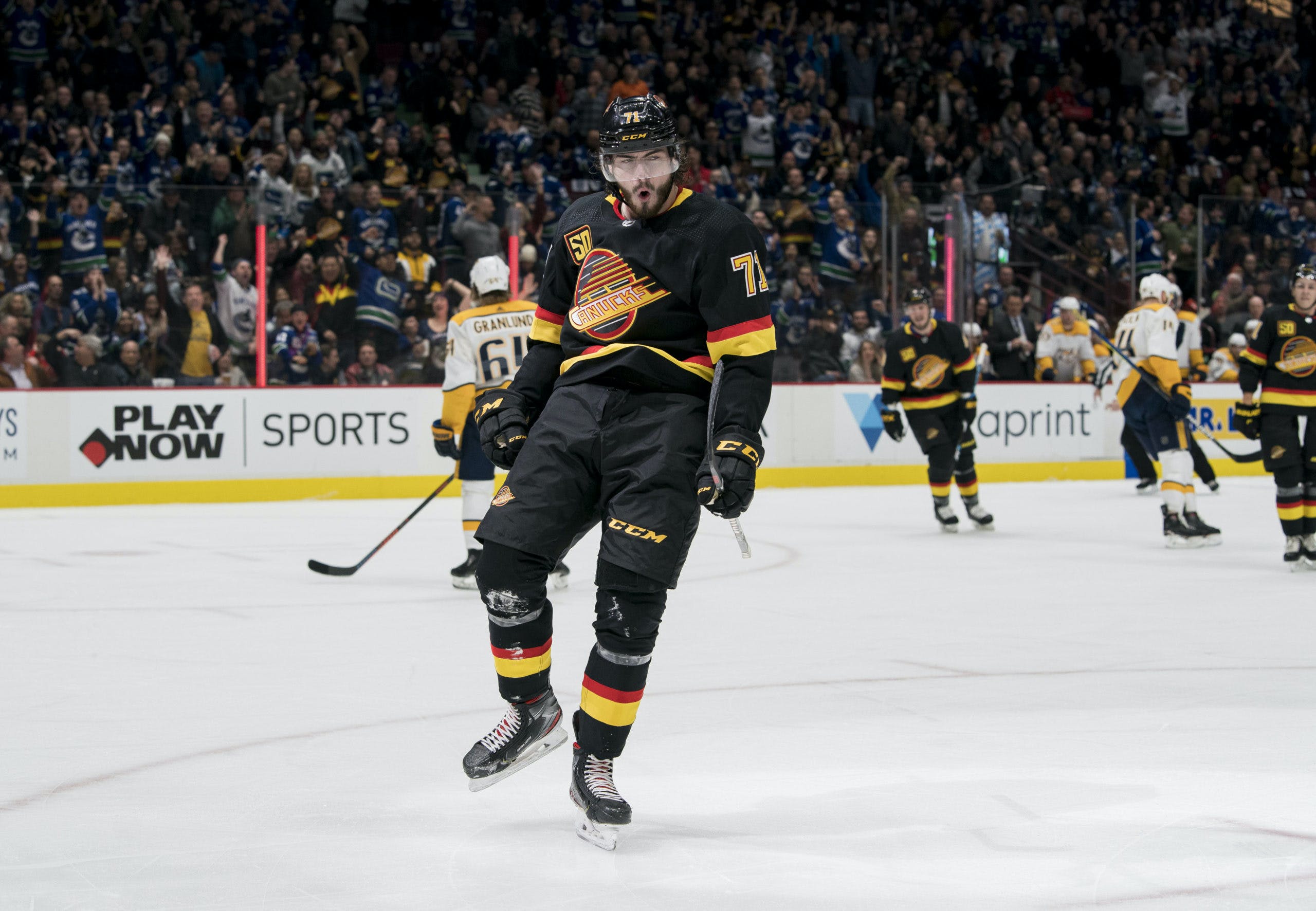 Photo credit: © Bob Frid-USA TODAY Sports
By Faber
1 year ago
Comments
In loving memory of his father Craig, Vancouver Canucks forward Zack MacEwen and his family have launched the My Biggest Fan Foundation.
The foundation is based out of Stratford, Prince Edward Island and will be honouring the legacy of Craig MacEwen.
Craig passed away in May of 2020 after a devastating stroke swiftly took him away from his family and loved ones.
Craig was always the biggest fan of his two sons, Zack and Kurtis. He always supported their dreams, instilled in them the importance of hard work, dedication, and taught them how to be good men.
He was their hero but also their biggest fan and the My Biggest Fan Foundation’s goal is to make more kids’ dreams of playing hockey a reality. For some families, the goal isn’t for their kids to play in the NHL, many families simply cannot afford the opportunity to give their kids a chance to play the game of hockey.
Advertisement
Ad
Advertisement
Ad
It’s not breaking news to say that the combination of time, effort and price to play hockey is high. From house league all the way up to Junior A, there are costs that many Canadian families struggle with every year.
The MacEwen’s wanted to help and this foundation was their way to honour Craig while having his legacy live on through sport and the love for the early mornings, late nights, long drives and sprints to the airport when you receive a phone call telling you that your kid was going to play in the NHL.
These moments are what make life so amazing and the MacEwen’s want no family to be left behind in their opportunity to experience such amazing moments.
The foundation’s mission statement is simple:”we are dedicated to helping all kids have an opportunity to play hockey!”
Advertisement
Ad
Advertisement
Ad
Here are the foundation’s goals that they wish to accomplish.

We offer support for hockey players and their families, in the form of:
We are fortunate to help families across Canada, with a focus on areas that Zack MacEwen has played throughout his hockey career. This includes Prince Edward Island, Amherst, Moncton, Gatineau, and Vancouver.
The My Biggest Fan Foundation has been created in Craig MacEwen’s memory. We are honoured to be able to help hockey players and their families, just as Craig did for so many years.
Craig was and forever will be his sons’ biggest fan.

This was the way that Zack wanted to honour his dad, who was his biggest fan throughout his hockey career and is still looking down smiling every time his son takes the ice.
Advertisement
Ad
Advertisement
Ad
“After everything went down you know with my dad last year, people wanted to donate in his honour and I think that’s kind of where it started and got the ball rolling for us,” said Zack. “From there, we ran with an idea about what would my dad want to do with the money. We came to the conclusion that he always loved to see kids enjoying their sport and having we all believe that every kid deserves to have a chance to play their sport. My parents went through it with me even when I was younger, I didn’t hear about the stories until I got older. There’s a financial weight that comes with putting a kid through hockey and it’s not easy. My parents made sacrifices and did such a good job for me to be given every opportunity and I think if we could just do that for some more families, that would be carrying on my dad’s legacy really well.”
Advertisement
Ad
Advertisement
Ad
Zack’s mom Juliana is the president of the foundation and will be overseeing the projects that they hope to accomplish with the MBFF. The initial conversations about the foundation made so much sense to her and pushed her to get the foundation off and running but she also found that the MacEwen family came together to really push this idea into more than just a thought.
“We’re close as far as a family goes and we chat all the time but this foundation has helped us come together so much over the past year even though it was Zoom calls and FaceTimes,” said Juliana. “Virtually, we got together as a family to plan this out, create the website and come up with ideas for fundraisers and stuff like that, so it brought us together and every time we got together we laughed, we cried, we reminisced, it was just amazing. It’s been so amazing that we have been able to come together as a family to plan it.”
Advertisement
Ad
Advertisement
Ad
The foundation’s name “My Biggest Fan” comes from an old picture of Zack and his dad that his mom had kept for years.

This is the part of sports media that I truly love.#Canucks forward Zack MacEwen spoke about the name behind his new foundation.

He is so happy to have found a way to honour his late father Craig, who will continue to help kids play hockey across Canada. ♥️ pic.twitter.com/XdV5ZpsxrG

The foundation wants to keep the memory of Craig alive and for him to be able to help kids across Canada play the sport that Craig loved so much. Craig always had a smile on his face and was so genuine to anyone he dealt with. This was made apparent to our former contributor Cory Hergott who was able to sit with the MacEwen’s for Zack’s first NHL game and Cory’s interactions with Craig actually go back even further to a prospects camp in Whistler.
Advertisement
Ad
Advertisement
Ad
“It was my first time covering a training camp,” said Hergott. “I stopped to check my messages during a bathroom break and it was a Twitter message from Juliana saying that Craig wanted to meet me and for a professional hockey player’s parents to reach out to me during my first experience with this media thing kind of took me back a bit. It wasn’t something that was even on my radar about why a player’s parent would want to meet me. The first thing he said wasn’t about hockey or anything, he asked about how I was doing with my cancer recovery. He genuinely cared and as a cancer survivor, that kind of thing hits home to me. It felt nice to have a guy genuinely care. The thing with Craig was that he made me feel like I was part of something special. He made me want to work harder and tell better stories about hockey. Craig was just an extremely genuine human being, he was full of advice for Zack and as the foundation says, he was Zack’s biggest fan.”
Advertisement
Ad
Advertisement
Ad

As for Zack, he is excited to be able to go out and meet some of the families once the world begins to get back to normal. He is excited for the annual golf tournament on Prince Edward Island to carry on his father’s legacy and keep his memory alive. Zack wants kids to learn life skills and how to be even better people in a similar way that his dad instilled in him through sport.
Both Zack and Juliana said that there are countless people to thank but wanted to shout out the efforts of Lindsay Gray and Kurtis MacEwen for getting the website up and running. Juliana’s brother Jeff Affleck and her cousin Kayla Weatherbie were two driving forces to get the foundation established and finally Doug Shepherd and Emily MacEwen for finding the answers to so many questions that the foundation needed answers to prior to its launch.
Advertisement
Ad
Advertisement
Ad
It’s truly a family affair and with all the MacEwen’s pulling the rope together, they believe that they can help change lives for Canadians that struggle to give their kids the opportunity to play the great sport of hockey.
Juliana is so proud of her whole family and is just constantly amazed at the man that Zack has become.
“I’m just so proud of Zack in so many ways, he’s got such a kind and giving heart,” said Juliana. “Although sometimes when he’s playing hockey, that kind heart might not come across… Off the ice, I promise, he’s very kind and giving,” she said while laughing. “He gets that kind heart from his dad. Zack and Craig had a very special relationship throughout his whole life and this is just a way for Zack to keep his dad close to his heart.”
Advertisement
Ad
Advertisement
Ad
She believes that Craig had an enormous role in shaping the man that Zack is today and it comes from more than just a father-son relationship, they were best friends and Zack always knows that no matter the score, he will always have his biggest fan cheering him on.
Whether it’s on the ice or now with the foundation.
More information about the My Biggest Fan Foundation can be found at MyBiggestFan.ca