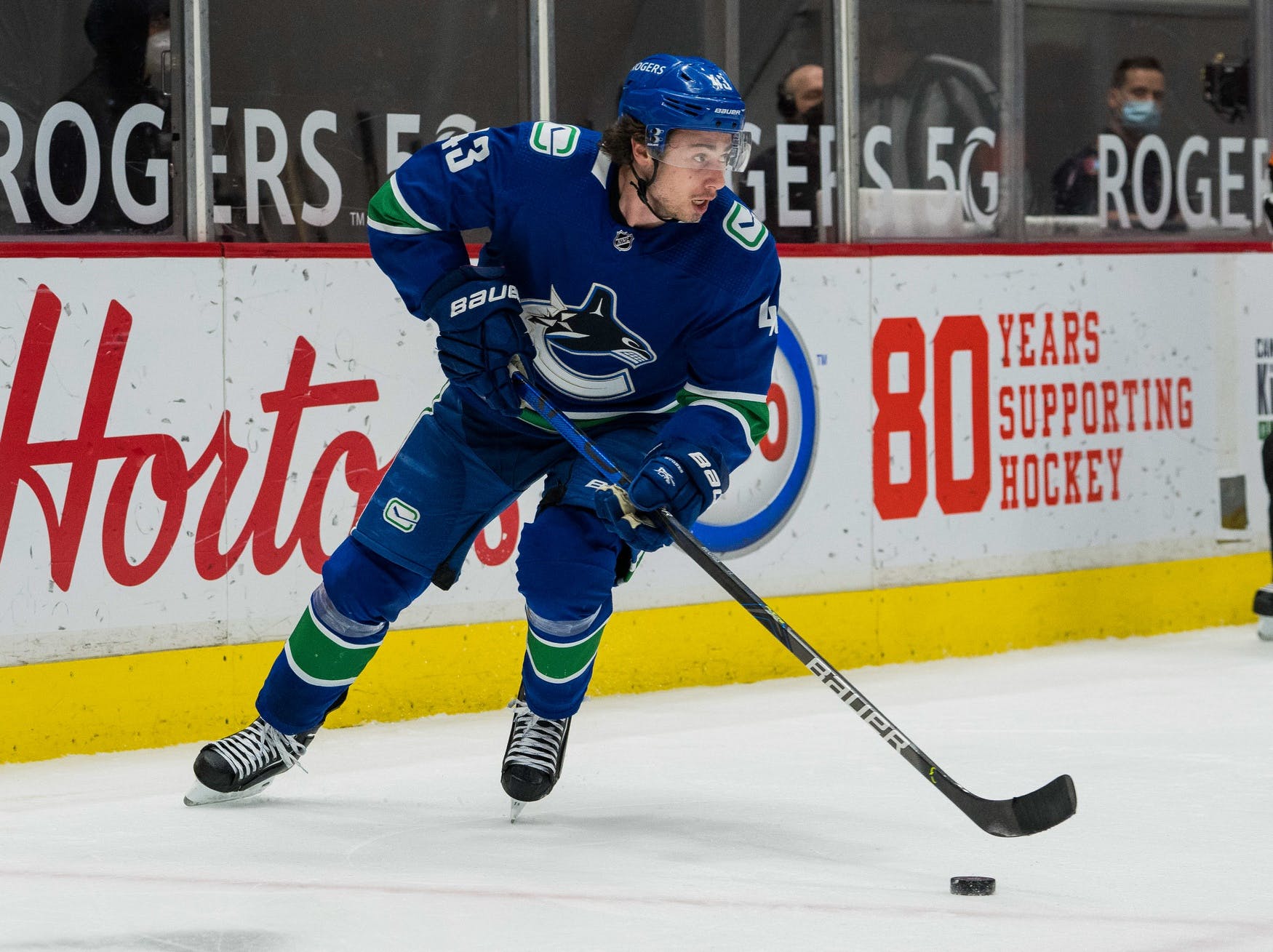 Photo credit: © Bob Frid-USA TODAY Sports
By Stephan Roget
1 year ago
Comments
Can an offseason have a stretch run?
If so, the Vancouver Canucks are in the midst of it in mid-August.
There’s a little over a month to go until training camp, and during that time the Canucks will sign their two most consequential contracts of the current era — or, more frighteningly, they won’t.
For now, we’ll keep things optimistic and assume that both Elias Pettersson and Quinn Hughes are both signed in the weeks to come.
Even then, however, there’s plenty of reason for pessimism — or at least a light smattering of worry — about their potential salary and term, and that’s especially true when it comes to Hughes.
Anyone paying attention to the market for top-flite defenders this offseason has no doubt uttered something to themselves along the lines of “this is really getting out of hand.”
Advertisement
Ad
Advertisement
Ad
Miro Heiskanen signed a second contract with Dallas for eight years at an average of $8.45 million.
Cale Makar only took six years from the Avalanche for his second contract, but upped the average to $9 million even.
The Blackhawks gave up a haul to acquire Seth Jones and then handed him an eight-year, $9.5 million AAV extension.
Dougie Hamiton joined the New Jersey Devils for the princely sum of seven years at $9 million.
Zach Werenski finally proved that at least someone was willing to stay in Columbus, but the Blue Jackets had to pay him an average of $9.583 million to make it happen.
And then, just over the provincial border, the Edmonton Oilers gave Darnell Nurse an eight-year, $9.25 million AAV extension a full year before his current contract expired.
Advertisement
Ad
Advertisement
Ad
To be more specific, anyone paying attention to the market for top-flite defenders this offseason AND keeping an eye on negotiations between Hughes and the Canucks probably shortened their utterance to something like “uh oh.”
There are arguments to be made about the inherent fairness and value of the above contracts, as well as where Hughes fits into this tier of players. Some will say his poor defensive results should keep him from earning a major pay-day, but take a gander at this midseason list of worst defensive WAR in the league. Sure, Hughes is at the bottom of it, but there’s also a lot of familiar — and highly-paid — faces on that list.

Advertisement
Ad
Advertisement
Ad
So make no mistake, by all the measures that seem to matter when it comes to NHL earnings, Quinn Hughes is still the Canucks’ only elite talent on the blueline, and the market standard has risen dramatically for elite blueline talent. One, two, or three signings like this might suggest a reversible trend. This many? In an offseason under a flat cap? For defenders full of holes and question marks?

Seth Jones, acquired by CHI, is a big minute defenceman coming of a catastrophic season with Columbus. Prior to that his numbers were fine but not in line with his reputation as an elite two-way defenceman. #Blackhawks pic.twitter.com/vM7GQzgF8T

Darnell Nurse, signed 8x$9.25M by EDM, is an offensive D who scored a lot of goals this season but who has consistently surrendered quality scoring chances when on the ice. Don't think he's nearly as bad as the overall projection suggests, but this is a BIG number. #LetsGoOilers pic.twitter.com/iCzkxRHkcS

Advertisement
Ad
Advertisement
Ad
This is the market now, and the market applies to Hughes. He’s is going to want his piece of the pie eventually.
No big deal, right? Just sign Hughes to a bridge deal now, and worry about it in three years.
Right?
Well, here’s the issue with that.
If you’re even the slightest bit worried about the Hughes camp using contracts like Makar, Werenski, and Nurse as comparables — and you should be, in a world of contract negotiations in which raw point totals are king — you should be even more worried about all the other big D contracts due to be signed over the next three years, each of which will use those same comparables, and the inevitably of those contracts, in turn, becoming Hughes comparables.
Adam Fox, Charlie McAvoy, Colton Parayko, Ryan Pulock, and Morgan Reilly all need new deals in 2022.
Advertisement
Ad
Advertisement
Ad
Mikhail Sergachev, Devon Toews, Brett Pesce, and more follow in 2023 and 2024.
Many of those players and their agents will be pointing to the Jones/Werenski/Nurse/Makar/Hamilton contracts as evidence that they’re deserving of a long-term deal with an average north of $9 million.
Most of them will get it.
Which means that, if the Canucks sign Hughes to a bridge deal today of either two or three years, they can pretty much pencil his next contract to cash out in the range of $72 million total, and quite possibly higher if Hughes progresses as many expect him to — and doubly so if the salary cap is raised significantly by then, which it probably will be.
With just three more years of his current production — and, ideally but not necessarily, with much improved defensive play — Hughes could easily demand an average salary of $9.5 million or higher, and the Canucks wouldn’t really have much of an argument against it.
Advertisement
Ad
Advertisement
Ad
But there is another way.
Earlier in the summer, there were reports about the trio of Hughes, Makar, and Heiskanen each looking at Thomas Chabot’s eight year, $8 million AAV contract as a prime comparable.

Freidman : Hughes, Makar and Heiskanen could all be looking at Chabot and his 8 times 8 deal. The talk is all 3 of those players see themselves ahead of Chabot.

Obviously, Makar’s Norris nomination put him in a different stratosphere and earned him an extra million, albeit at less term.
The Heiskanen prediction, however, proved to be more or less on the money, with him taking $450K more per year than Chabot.
Hughes and Heiskanen are two players with very similar track records. Hughes was nominated for the Calder, and Heiskanen probably should have been. Both went on notable playoff runs in 2019/20 — Hughes as a rookie, Heiskanen as a sophomore — in which they put up point-per-game numbers. Both struggled in 2021 as their teams missed the postseason.
Advertisement
Ad
Advertisement
Ad
One could argue that Heiskanen’s Cup Final performance and greater defensive acumen puts him ahead of Hughes, and one could argue that Hughes’ significantly higher point production puts him ahead of Heiskanen.
Either way, it’s close, and that’s the comparable the Canucks should be zeroing in on in the present moment. If they can leverage Hughes’ status as a 10.2c RFA unable to receive offer sheets to get him in under the Heiskanen bar, all the better.
Getting Hughes signed to an eight-year, $8-ish million contract this offseason would look like a win right here, right now, and would only shine brighter as more exorbitant defender salaries hit the books in the years to come. He’d have to be amenable to such a deal, of course, but most indications are that he at least was at one point,. If that’s still true, it’s a course the Canucks can’t afford not to pursue.
Advertisement
Ad
Advertisement
Ad
Think of it this way: would you rather pay Hughes $64 million from ages 22 to 29, or pay him $75-80 million for ages 25 to 32?
The former would constitute Hughes being locked in for the entirety of his prime, and have his contract end with plenty still left in the tank, leading to a less immediately regrettable extension thereafter.
It would also mean around $1.5 to 2 million extra available for the Canucks to spend in a lot of those years, which would prove incredibly valuable as the team attempts to pry open a competitive window and keep it open. Even that seemingly small amount could be crucial to keeping Brock Boeser, Bo Horvat, JT Miller, Nils Höglander, and others in the fold moving forward.
Fitting a long-term extension for Hughes under the 2021/22 cap would be difficult — a lot more difficult than fitting a bridge in the range of $6 million AAV — but it could be done. It sounds as though a bridge contract is a near certainty for Pettersson, and that should come in at around $7.5 million.
Advertisement
Ad
Advertisement
Ad
Combined with $8 million for Hughes, that would eat up all of the Canucks’ current cap space and then some, but placing Micheal Ferland on LTIRetirement would open up enough to get Jason Dickinson under contract, too.
Some creative opening day moves — like Vasily Podkolzin and Jack Rathbone papered down to Abbotsford — might be required to make it all work, but it’s doable.
And doable should be enough to do it.
Jim Benning and Co. should be looking at this as a unique opportunity.
Never again will they negotiate with Hughes without the threat of an offer sheet hanging over their heads.
Never again will they be able to use a sophomore slump to suppress his salary demands.
If they don’t go long-term with Hughes now, they’ll be entering into contract talks in a few years with more than a dozen high-priced comparables on the table.
Advertisement
Ad
Advertisement
Ad
A rising tide lifts all boats. The Vancouver Canucks should thus get theirs anchored down before its too late — and before it transforms into a luxury yacht.