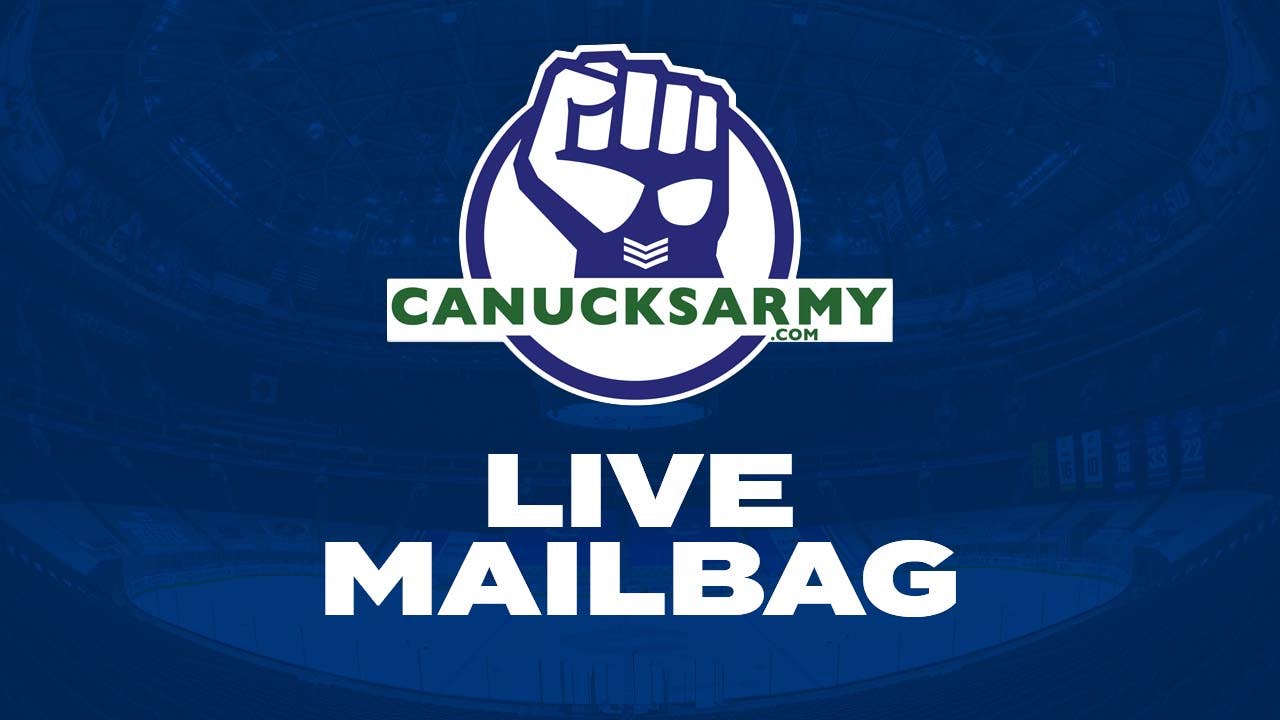 By David Quadrelli
9 months ago
Comments
Dear readers of CanucksArmy,
It’s been a while since we did a live mailbag, but that’s exactly what we’re doing on this Friday afternoon!
I’ll be taking your questions on Twitter, and as usual of a live mailbag, I’ll try to answer as many questions as possible in the comment section of this article!
Let’s get into it!

Martin: do you really feel he'll get full back up duty? Or is this mostly just depth insurance for the team?

It’s only fitting that we kick off the mailbag breaking down the biggest piece of Canucks news of the day:
The signing of Spencer Martin.
By now, you’ve read plenty about Martin on this site.
The 26-year-old was acquired in the offseason and quickly turned into found money for the Canucks, who have now seemingly found their backup goaltender for next season.
But it’s more than that.
The Martin contract, which is two years in length and carries a cap hit of $762,500, is completely buriable by the Canucks, should they choose to go a different route.
Advertisement
Ad
Advertisement
Ad
This is completely different than the Braden Holtby and Jaroslav Halak contracts that were handed out by the previous management regime for many reasons, but perhaps the most important thing to note is how it affects Michael DiPietro.
Coming into this season, DiPietro was a clear number three goaltender on the organization’s depth chart, but stumbled out of the gate a bit this season.
This, of course, coming a year after being forced to sit on the taxi squad and away from game action for the majority of the 2020-21 season.
Coming into camp this season, DiPietro knew that with Halak’s contract carrying a full no-move clause, there was basically no chance he could make the Canucks out of camp and win the NHL backup job.
Now, however, there’s nothing preventing him or Arturs Silovs from coming in and winning the backup role out of camp next season.
Advertisement
Ad
Advertisement
Ad
Silovs and DiPietro will almost certainly split starts next season in Abbotsford — which is fine — but if one of them is dynamite next season — similar to Martin this year — there’s no veteran goalie on an NMC standing in the way of them getting a call up to the big club.
In essence, the Spencer Martin signing gives the Canucks cap savings and flexibility in more ways than one.
As for the first part of the question asking if Martin is ready for backup duty at the NHL level, I’ve made my thoughts clear.
The Canucks have almost certainly got an NHL-ready backup signed for two seasons, and just in case he doesn’t perform well at the NHL level, there’s nothing in his contract saying that the Canucks can’t send him down to the minors and call up someone more deserving in his place.
Advertisement
Ad
Advertisement
Ad
To me, it’s simple, really.
This team needs to go out and find a partner for Quinn Hughes.
Luke Schenn has been a great story, but there’s no guarantee he’ll be able to perform at this level next year.
Even if he is, adding another top-4 calibre defenceman to this group is the most pressing need right now.
I’ll say a right-handed top four defenceman is the bigger need right now than a third line centre.
Although a competent one of those couldn’t hurt, either.

How many points do you think Podz will get next season?

No stats, just vibes here.
No real way to know how Vasily Podkolzin will be used next year, I’ll say Podkolzin tallies 40 points next year. He’s at 19 on the year, and doesn’t get power play time.
He’s going to go down to Abbotsford for the playoffs and that should benefit him in the development of his offensive abilities.
Advertisement
Ad
Advertisement
Ad

@QuadreIli With Martin locked up for two years isn't that kind of an indictment on how the organization feels about DiPietro? Could we possibly see him moved out as a piece to possibly save cap room. Like here's Poolman but we'll give you Mikey to make it worth it?

This is an interesting question.
Did Spencer Martin pass Michael DiPietro on the Canucks’ depth chart this year? Yes he did.
Does that mean the organization doesn’t believe in DiPietro anymore? Absolutely not.
As mentioned above, DiPietro is going to benefit from getting starts in Abbotsford all of next season.
The best-case scenario for DiPietro personally is that he shows up to camp and wins the backup role, which wasn’t even an option this season, to no fault of his own.
There’s no need to try ship him out, as his contract won’t have implications on the big club’s salary cap while he’s in Abbotsford.
In fact, trading DiPietro would be foolish at this juncture, as sources have suggested DiPietro may not currently have much positive value on the trade market.
Advertisement
Ad
Advertisement
Ad
I’ll be updating this mailbag and checking the comments until about 6 PM Pacific so be sure to get your questions in and check back periodically to see more answers!