Advertisement
Ad
Let’s Talk About Michael Rasmussen
By Jeremy Davis
5 years ago
Comments
Embed from Getty Images
Any of
you that followed me during my most recent stint on Twitter will know that a
have a particularly strong affinity for Nico Hischier, one that I was
particularly vocal about during the World Junior Championships, when he
basically single-handedly scared the pants off the Americans in the quarter
finals. Hischier, who started the year outside the top ten by many (and in 10th
by my early top ten), was already a consensus top five pick at this point and
was only heading up (he’s now provided a reasonable challenge for first
overall).
Meanwhile,
the Canucks heading into the Christmas break (and thus the start of the World
Junior tournament) were undoubtedly one of the league’s worst teams, and their
position in the standings showed it. They sat in 27th place at Christmas, and
even with a couple of early wins out of the Christmas break, hope was allowed
to creep in and create draw a line between the Canucks’ terrible record, their
eventual draft position, and this shiny young Swiss centre that was setting the
WJC on fire.
Advertisement
Ad
Advertisement
Ad
As a
rule, the Canucks aren’t usually allowed to have nice things, with a few
exceptions. In nearly 50 years, they have never captured the first overall pick
– a trend that started with a spinning wheel back in 1970. So rather than
hoping for number one, hoping for a top two or three selection seemed like a
safer bet for a Vancouver fan, right? This could really happen!
It was
then that my bubble was burst by the mention of one name: Michael Rasmussen.
It was a
sunny December morning when I received this DM :

And with
that, my whole world came crashing down. It hadn’t occurred to be before then, but
Rasmussen was the perfect recipe for a Canucks selection: he’s a two-way
centre, he scores a lot of goals, he’s big (6-foot-5), and he’s local (born in
Surrey). How do the Canucks say no to that?! Would they really pick Rasmussen
over Hischier?!
Advertisement
Ad
Advertisement
Ad
Since
then, the landscape has changed tremendously. Those couple of wins out of the
Christmas break for the Canucks turned into a run of success that has brought
them up out of the basement and on the verge of slipping into a playoff spot.
Combine that with the fact that Hischier’s stock is only rising, and the result
is that getting our hands on Hischier, or any player near his calibre, seems
like nothing more than a pipedream.
Which
prompts a response like this:

One positive: the Canucks are getting into the range where picking Rasmussen won’t be a massive reach.

Seems like a sensible silver lining to draw, given the circumstances.
Let’s take a closer look at his scouting report. Rasmussen was born April 17th, 1999, putting him roughly in the middle of the age range for a first time draft eligible player in 2017. He’s a rangy centre that defends well, getting his stick into shooting lanes, block shots and so on. Offensively, he’s a lot to handle. He uses his 6-foot-5 frame very well in recovering and protecting pucks. His vision and passing are decent, while his shot is a bit underdeveloped (in terms of quickness of release and consistency of accuracy), and his stickhandling and hockey IQ are not thought of as strengths. Of course, that hasn’t stopped him from putting up a large number of goals – the kid goes to the net and knows how to leverage his size.
Advertisement
Ad
Advertisement
Ad
Here’s Rasmussen scoring a bevy of goals from in close – all in one game no less. Note that many of them come on the power play: that will become a theme later on in this article.
Furthermore, Rasmussen is shooting up the draft rankings, which might indicate that maybe this is a player we’d want to jump all over.
Hold up. Take a look at this:

Hmmm, I wonder what top 15 ranked skater would end up not producing because he can’t score 5v5 in juniors pic.twitter.com/R46I5fzIhf

While drafting based on points is a step up from drafting based on size, it’s situations like this that remind us just how important context is to point totals in junior hockey. So let’s break down Michael Rasmussen’s point totals, shall we?
Here’s a breakdown of Rasmussen’s scoring in each individual situation. Rank indicates rank in points among 2017 first-time eligible forwards.
The top three lines after the header tell a very important story here. Rasmussen is seventh in points – sixth in primary points – in all situations. He’s scored a whole lot of goals, and goals are nice. But the third line shows how clearly dominant he’s been on the power play – and the second line shows how underwhelming he’s been at 5-on-5.
Advertisement
Ad
Advertisement
Ad
Scrolling back up to Josh Khalfin’s tweet, you’ll note that his estimated points per 60 rate is actually less than league average. This is a guy who’s now ranked in the top 10 by our Consolidated Rankings system – McKeen’s even had the gall to put him 4th overall on their most recent list (though let’s face, that list is so full of hot taeks, it’s abundantly clear that getting attention is more important to them that accurately assessing talent).
When projecting future success, 5-on-5 has long been a more stable indicator compared to other situations. Studies have indicated that while success at 5-on-4 is repeatable at the team level, it is often transient at the player level – so much is dependent on teammates and systems, players who consistently scored at a high rate with the man advantage are very hard to find. DTMAboutHeart’s work on WAR present numbers on this, with the year-to-year repeatability of power play offence being less than half of that of even strength offence.
Advertisement
Ad
Advertisement
Ad
Additionally, if their were to be a repeatable skill on the power play, it wouldn’t be goal scoring. Outside of dominant examples like Alex Ovechkin, power play goal leaders tend to ebb and flow. Indeed, the numbers appear to indicate that power play assists have a higher degree of repeatability for forwards (note the blue bars in the top right graph). 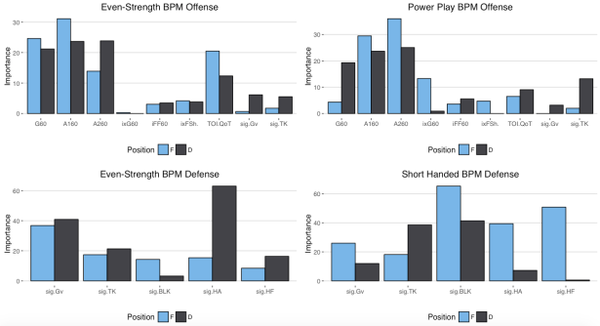 The theoretical explanation for this could be that the power play goals are the rewards of opportunists. Often it’s the set up men doing the heavy lifting – distributing from the half wall, drawing in defenders, finding open seams – while the scorer is more of a beneficiary.
Glance back now at the distribution of Rasmussen’s point totals – his power play points (15 goals, six primary assists, five secondary assists) are virtually inverse of their level of importance in predicting value. That’s a major red flag.
Advertisement
Ad
Advertisement
Ad
Rasmussen’s goal-to-assist ratio in general is jarring, and should ring a bell for Canucks fans in particular. Remember Jake Virtanen’s draft season in the WHL: 45 goals, 20 assists. While Rasmussen’s 32 goals and 22 assists doesn’t provide quite the same ratio, it could be an indication of similar problems. Namely, an inability to properly use one’s teammates. A problem like this becomes magnified when the player reaches professional hockey, and can no longer pile up points through physical dominance. Are these similarities frightening you? Good!
Rasmussen’s cohort suggests roughly a one-third shot a becoming a full time NHL player. While there are some sexy names like Ryan Getzlaf and Jordan Staal in there, there are plenty of other players that failed to live up to expectations, including pair of former Canucks in Zack Kassian and Taylor Pyatt.
Advertisement
Ad
Advertisement
Ad 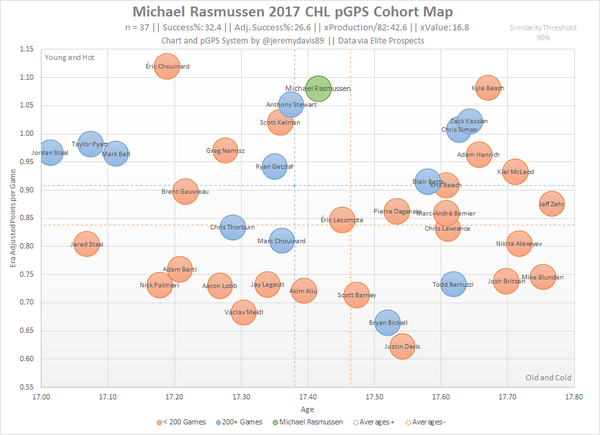 We also have to take into consideration that this area is a weakness of cohort projection models like pGPS – it based solely on points per game, and doesn’t account for the fact that more than half of his points have come on the man advantage. If anything, this bubble chart oversells Rasmussen rather than the inverse.
The distribution of deployment in his cohort also paints a picture of more of a middle-to-bottom six scorer than a top end player. 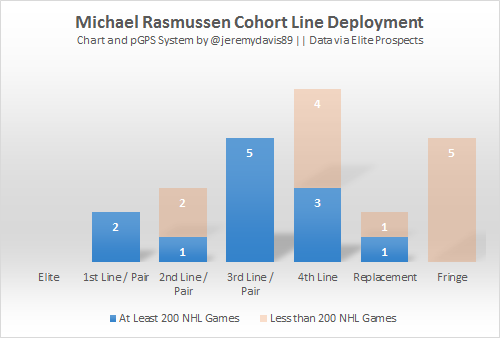 All of this isn’t to say that no team should draft Michael Rasmussen. He is still a very good prospect with an impressive attitude and work ethic, and an interest in improving the areas in which he lacks. However, as with all draft picks, the number at which the prospect was selected is as important as the selected player himself. This is a business, and it is all about maximizing value.
Advertisement
Ad
Advertisement
Ad
Getting Rasmussen in the mid-to-late first round is in all likelihood still a good decision. But this business of him being in the top 10, or at fourth overall in particular, is frankly nonsense. Teams would be wise to wait a bit longer before taking a flyer on him.
At which point the Canucks are willing to take him, and which point they’d let him go are mysteries for now. The Canucks themselves are such an objectively bad, yet entirely resilient team that we have no idea whether they’re going to be picking 1st or 21st at this point. They could be in a range where taking Rasmussen would be defensible, or they could be in a position where he’d be a massive reach. Underlying data still suggests the latter, but the Canucks have resisted that trend so far.
Advertisement
Ad
Advertisement
Ad
At this point, I won’t go as far as saying “Don’t pick him”. But if the bottom falls out of the Canucks’ season and they end up with a top ten selection, this will likely be a topic that we revisit.