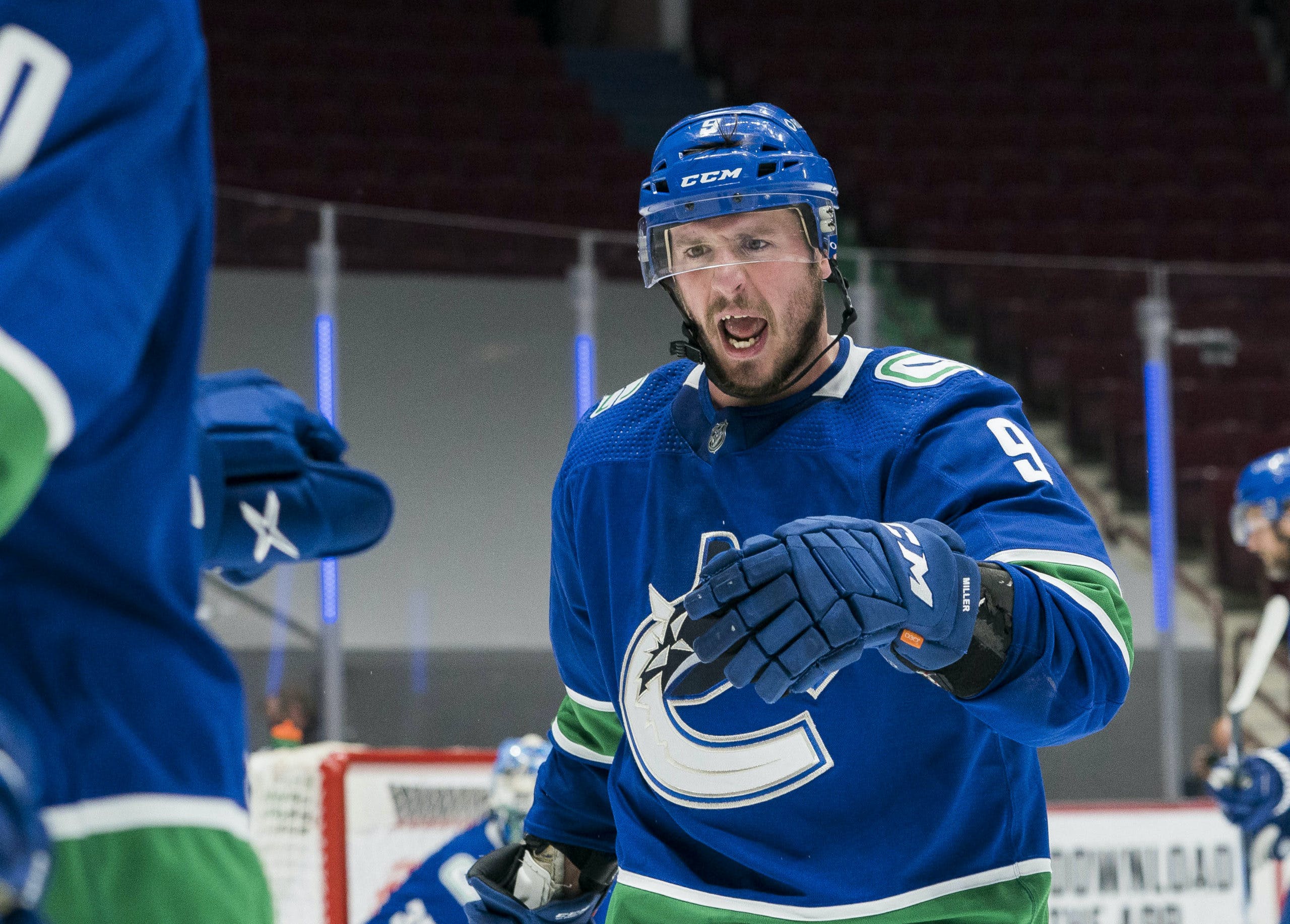 Photo credit: © Bob Frid-USA TODAY Sports
By David Quadrelli
1 year ago
Comments
Yesterday, Vancouver Canucks forward JT Miller joined John Scott on the Dropping the Gloves Podcast and discussed numerous topics.
He reflected on his years with the New York Rangers and Tampa Bay Lightning at length, and talked about how he and Alain Vigneault didn’t see eye to eye back when Miller was a member of the Rangers, what it was like getting traded twice, and more.
Additionally, Miller talked about a number of Canucks centric topics, including how he feels the need to chirp Brock Boeser constantly, but more on that later.
First, Miller said he and the rest of his Canucks teammates miss the fans, and that should come as a shock to absolutely nobody.

The boys miss having fans in the building.

Interview with JT Miller is live! Awesome time conversation and some great stories.

Miller took some time to reflect on his first season with the Canucks as well before singing the praises of the core group they have this season and moving forward.
“It’s a couple things,” said Miller when asked what he attributes most to the success he found last year. “I think I’m very understanding of that my game is now at this point in my career. I’ve played in some different organizations now, but the ultimate thing is opportunity. Everything you could ever ask for I was given. An opportunity to play on the penalty kill, the power play, and play on the first line.”
Advertisement
Ad
Advertisement
Ad
“I love the responsibility. I take a lot of pride in it… We were on a good hockey team last year and the opportunity was everything a player could ask for and I just tried to make the most of it. Just try to string together a bunch of good games, and we had a good hockey team so that helps too.”
Miller then took some time to tip his cap to goaltender Thatcher Demko, and brought the good stuff when he recounted the events that led to him fighting Montreal Canadiens defenceman Ben Chiarot recently.
First, Miller said he and his coach (it’s not clear if he means Travis Green but we’ll assume as much) got into it on the bench, leaving him fired up. Then, Chiarot thought Miller was kidding when he challenged him to a fight. But don’t take my word for it:
Advertisement
Ad
Advertisement
Ad

Then, Miller was asked to explain what happened at the start of the season and why the Canucks stumbled so hard coming out of the gate.
“I don’t know, it’s hard to say,” said Miller. “It was like a light switch after the first 15 games or so, and we weren’t actually winning at the beginning of playing well, we kept finding ways to lose, but we’ve been playing well for over a month now.”
“I don’t know what happened, we just weren’t ready to start the season. We just weren’t on the same page and I hate using excuses of any type in the NHL but we didn’t get a lot of practice time, we had some new faces, we’ve had some injuries, but that’s all part of the game. We weren’t ready to play at the beginning of the year and we didn’t execute at a high enough level to win hockey games.”
Advertisement
Ad
Advertisement
Ad
Miller added that the Canucks believe they can make a late season push for the playoffs and called the club’s upcoming six-day break “much needed.”
Toward the end of the interview, Miller gave this hilarious response when John Scott asked him what it’s like to play with someone as handsome as Brock Boeser (an interesting question, no doubt):

How do you stand being around someone as handsome as @BBoeser16?

“I try to call him ugly as many time as possible.” – JT Miller

To listen to the full episode, just search for the Dropping the Gloves Podcast, available everywhere you get your podcasts.