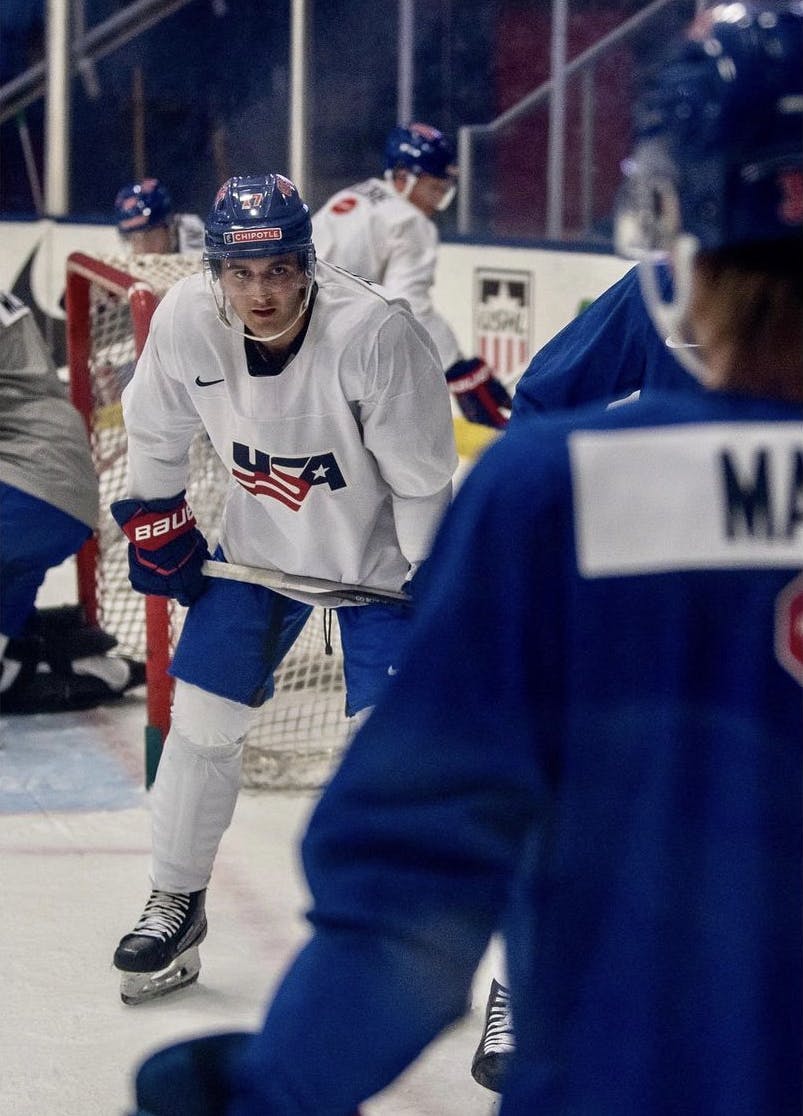 Photo credit: @photosbysarahb (IG)
By Faber
5 months ago
Comments
As the top Canucks prospect patiently awaits a chance for a bounce-back game at 11 am on Friday, the two 20-year-old left-shot defence prospects had good days on Thursday’s day three of the World Junior Championships.
Let’s start with the morning game, where Canucks prospect Joni Jurmo had a much better showing for Finland, who ended up winning 4-3 in a shootout over Czechia.
Jurmo showcased his high-end skating ability and was much better with his decision-making in this game. He had his struggles during Finland’s first game of the tournament but made those struggles look like they may just be nerves with how much better he played in game two.
He even found the scoresheet with a secondary assist on a game-tying goal in the second period.

Secondary view on the secondary assist for Joni Jurmo.

Jurmo also defended well in this game. He used his size on board battles to push players away from the puck and gain possession.
He defended a quick two-on-one very impressively after his defence partner got flipped into the Finnish bench.
Advertisement
Ad
Advertisement
Ad

Huge defensive play by Joni Jurmo to break up a 2-on-1 after his defence partner, Puutio, was hammered into the bench. #Canucks pic.twitter.com/EFU9ReAXTj

Jurmo even drew some high praise on the broadcast from TSN’s Craig Button.

Canucks prospect Joni Jurmo getting some praise from @CraigJButton on the broadcast.

Jurmo finished with 13:34 of ice time, one assist and two shots on net.
This was a great all-around performance and he likely earned himself some more ice time as Finland continues to move around their defence pairings to find what works best.
Jacob Truscott was also in action on Thursday. He and his USA squad faced Switzerland in the final game of the day.
The Canucks’ 2020 fifth-round pick continued to play his style of game and that is exactly what USA needs from Truscott.
He built off the success from game one and put together another masterclass performance on being a quiet and reliable defenceman. The loudest part of Truscott’s game was when he rang the puck off the crossbar.
Advertisement
Ad
Advertisement
Ad

Canucks prospect Jacob Truscott rings one off the crossbar. pic.twitter.com/fhlWZAsPL9

Though he doesn’t go looking for offence, when that much ice presents itself, Truscott can step up and get a scoring chance of his own.
As weird as it sounds, his playstyle may end up being his best asset at the moment. Being able to let his partner roam while holding it down in his own end is a much-needed style of play for any team. The fact that Truscott can play both sides of the ice and looks comfortable on either end of the blue line could be very important for his pro future.
We are going to go back and put together some video work on Truscott’s breakouts because he has been excellent for USA in their first two games. There’s no question about his consistency and that is all you can ask for from a defensive defenceman.
Advertisement
Ad
Advertisement
Ad
Truscott finished with 16:00 of ice time and was used on USA’s penalty kill and even saw some time with Luke Hughes in the third period for the second game in a row.
Friday afternoon sees Jonathan Lekkerimäki get back on the ice as Sweden takes on Austria at 11 am.
We will keep you up to date with all the latest Canucks news from the world juniors.