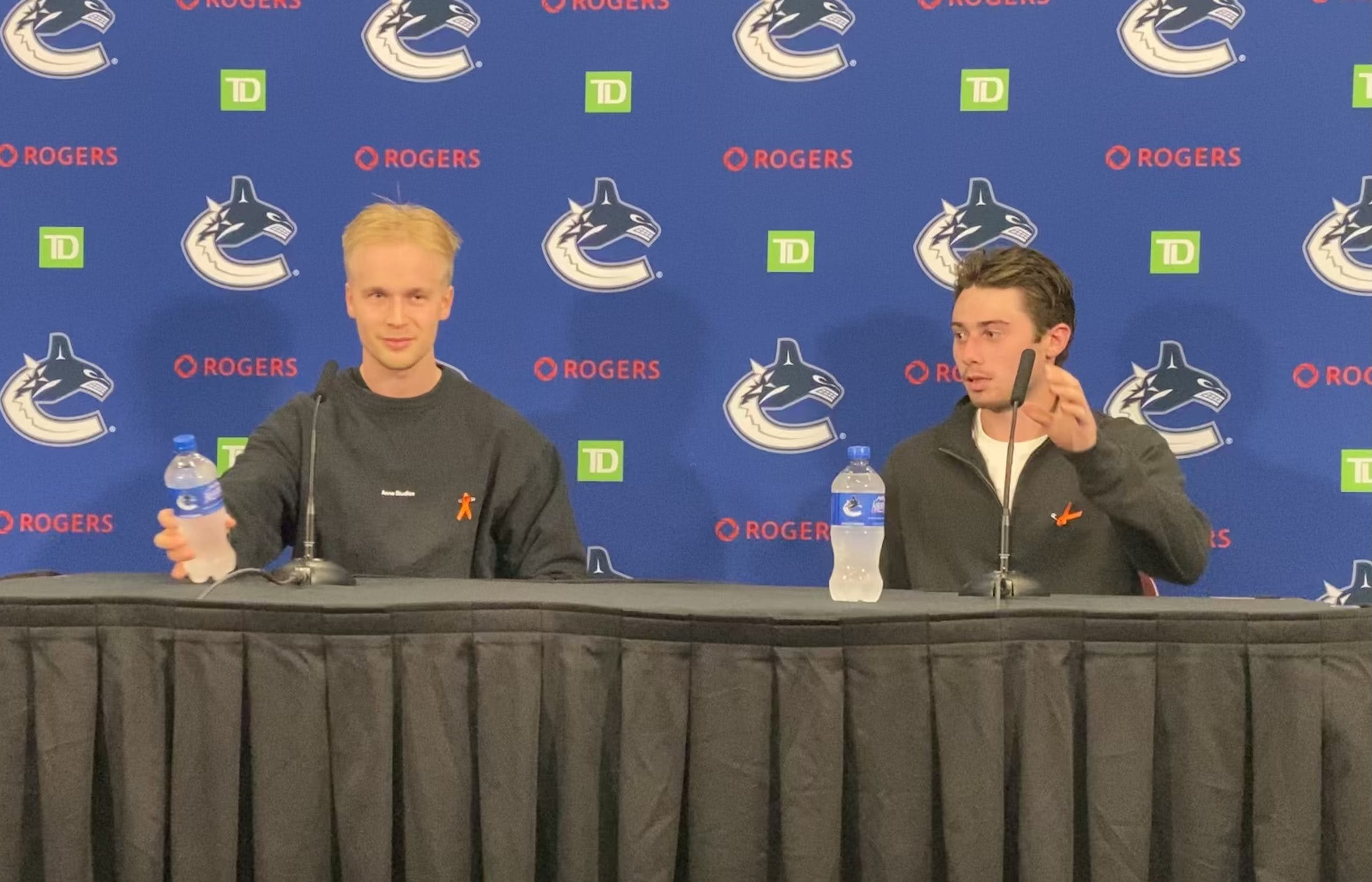 By Faber
1 year ago
Comments
After negotiations cranked up on Thursday, the Vancouver Canucks officially announced the signing of Elias Pettersson and Quinn Hughes on Sunday morning.
As expected, the deals came in with Pettersson at $7,350,000 AAV over three years and Hughes going long with a six-year deal at $7,850,000 AAV.
Rick Dhaliwal of Donnie and Dhali spoke with J.P. Barry about how the deal came together.

Agent JP Barry – “A lengthy process & both sides tried to make several different terms work. With the cap room available, this is what made sense for everyone in the end.

Quinn & Elias worked very hard on and off the ice in Michigan to make sure they are ready to rejoin team.”

Now the pressure swings back on the players as they will have to perform up to their new contracts after missing training camp and coming in late to the preseason.
Advertisement
Ad
Advertisement
Ad
Jim Benning met with the media at noon on Sunday as Pettersson and Hughes followed shortly thereafter.
“It was an interesting process. We spent a lot of time August talking to Pat (Brisson) every couple of days to figure out different scenarios,” said Benning. “We talked about what it would look like about the range on the deals. I think the talks really ramped up here this last week when we started camp and they weren’t here. We got to an agreement and I’m happy.”
Benning talked about looking for a long-term deal with Pettersson on the next deal.
“With Petey, we decided to a three-year deal. It’s only four years before he’s unrestricted so we will see what it looks like the next three years and maybe next time do an eight-year extension with him.”
Advertisement
Ad
Advertisement
Ad
Obviously, the goal with Pettersson should be to lock him down long-term but for now, he’s got a three-year contract to prove that he is a 10-million dollar player deserving of an eight-year deal.
After a busy offseason, Benning was happy to get these deals done and complete his busy summer.
“We worked hard this summer,” said Benning. “In the end, we ended up getting rid of $25 million of cap space. We brought in OEL, we signed Garland, we were able to make our team better and more competitive, and still get these guys signed. When we set out at the start of the summer, if [you would have told me] we could have done everything that we ended up doing over the course of this last three or four months, I think we would be happy.”
Advertisement
Ad
Advertisement
Ad
There wasn’t much to note from Pettersson or Hughes. They were treading carefully through the questions about their contracts. Hughes said that he has been focusing on the defensive side of the game for a lot of his offseason workouts, and he said that he put an emphasis on his backwards skating. Hughes did say some positive things about the current roster and how happy he was that his deal got done.
“I think that this is the best roster we’ve had in my three years here, that was another thing, I definitely didn’t want to be home for too long because I think that we have a really good team here and I wanted to be here. So that me and Petey could out here, get our feet wet and have a good start to the season. I think Jim did a really good job this summer, I want to thank him for the contract as well as the Aquilini family. I think we’re both happy we are here and like I said it’s a really good roster so we will have to see how it goes.”
Advertisement
Ad
Advertisement
Ad
Pettersson and Hughes confirmed that they did not have to do Travis Green’s famous conditioning skate just yet but did say that they will do whatever they are told. The two players skated on Sunday but are not in the lineup for the Sunday game against the Winnipeg Jets.

Travis Green says Pettersson and Hughes won’t play Tuesday, tentative plan is for them to play the last two games

Green later confirmed that they won’t be in the lineup for Tuesday’s game, leaving on two preseason games for the two young stars to participate in.
There are three preseason games left before the season starts and Pettersson said he hopes to be in at least one or two of them.
Now we wait for the Canucks’ two all-stars to make their return to the lineup and add a much-needed boost to the team’s offensive punch.
Advertisement
Ad
Advertisement
Ad
It looks like that will be Thursday in Edmonton if there are no hiccups.