Advertisement
Ad
Jalen Chatfield vs Olli Juolevi: How the undrafted Chatfield has earned the coach’s trust 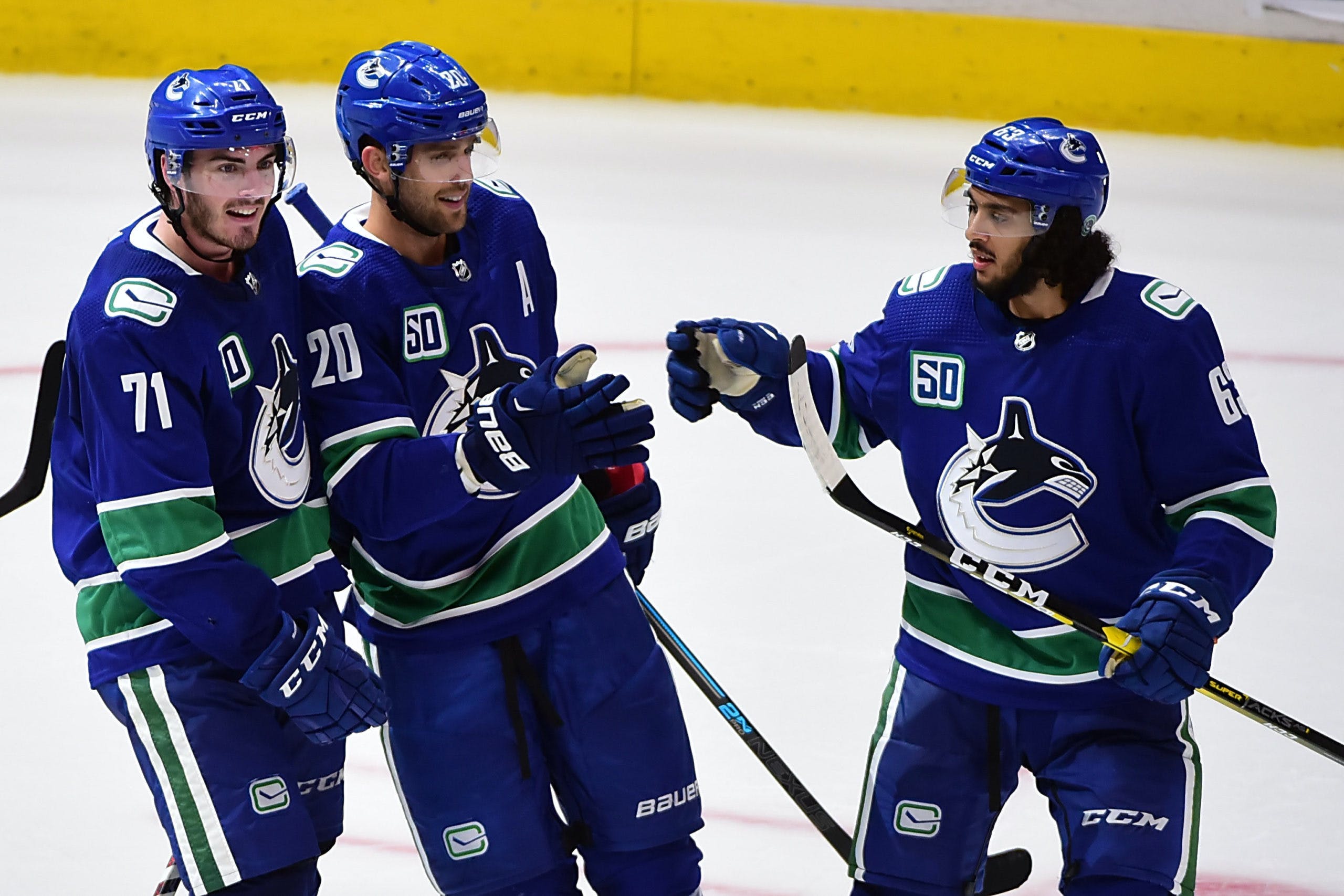 Photo credit: © Anne-Marie Sorvin-USA TODAY Sports
By Noah Strang
1 year ago
Comments
When Jim Benning called Jalen Chatfield a cross between former-Canucks defenders Troy Stecher and Chris Tanev this summer, many fans rolled their eyes.
Chatfield had just been re-signed by the squad, yet he had never seen the ice at the NHL-level and was seemingly stuck in a glut of defencemen at the bottom of the lineup with Brogan Rafferty, Olli Juolevi, and Jack Rathbone. Juolevi was the favourite to take hold of the final spot on the third D-pairing and for the first few games of the season that was exactly what happened.
However, since then we have seen a shift in the hierarchy among the defence, and the undrafted Chatfield has entrenched himself as a regular while Juolevi — the former top-five pick — has found himself reduced to a healthy scratch. Why has this happened and what does it mean for the team moving forward? Let’s take a closer look:
Advertisement
Ad
Advertisement
Ad

Juolevi’s Deployment and the Ripple Effect

The biggest issue that Juolevi faces on his path to becoming an NHL regular boils down to one word: trust.
His ice-time is very carefully managed so that he only faces weaker competition, mostly the other team’s third and fourth lines. Credit to Juolevi that he has performed solidly in these matchups, but when he is forced into tougher situations it’s clear — through both the numbers and the film — that his flaws get exposed.
The largest knock against Juolevi has remained his agility and foot speed and those deficiencies often get exposed when he’s forced to turn quickly, such as when facing an oncoming winger on the rush like this play against Elias Lindholm which leads to a chance for the Flames.

Juolevi beat on the outside despite giving Lindholm the ol' reach-i-o; Myers drops for the block #JuoleviWatch #GiraffeThings #Canucks
21/ pic.twitter.com/lKz3PaRo9r

Advertisement
Ad
Advertisement
Ad
While every defender on the Canucks has struggled at some point this season, it’s been especially bad for Juolevi who has a 42.46 xGF% at 5-on-5, the lowest expected goals percentage of any defencemen on the team. Juolevi doesn’t push play forward enough for it to be worth having to coddle his ice-time, especially when you consider the ripple effect that having Juolevi in the lineup causes.
If Juolevi is always facing the weaker opponents, someone has to face the opponent’s top lines, and his presence over-extends the D-group. It puts the Canucks in situations where players like Alexander Edler have to play huge chunks of minutes, or Quinn Hughes has to take on tougher matchups that limit his offensive potential.
This article isn’t supposed to be a critique of Juolevi and I don’t want to be overly harsh on him, as he has shown good qualities for a rookie defenceman. But now let’s take a look at what Jalen Chatfield brings to the table and why coach Travis Green has shown much more confidence and trust in the undrafted 24-year-old.
Advertisement
Ad
Advertisement
Ad

Jalen Chatfield finally made his NHL debut this season after spending time with the club in the past but never actually touching the ice. He has managed to carve out a role for himself pretty quickly and now will likely be a staple in the lineup moving forward as long as he is healthy.
He has done this by providing a steady presence for a Canucks’ lineup that has been in desperate need of one. He’s only allowing 0.99 GA/60 mins while on the ice at 5-on-5, the best mark of any Canucks defencemen (besides Jordie Benn) and has made several noticeable defensive plays to break up scoring chances such as this one below.

Advertisement
Ad
Advertisement
Ad
Chatfield hasn’t done much offensively, but the Canucks have multiple defencemen who can push the offence and that hasn’t been the role asked of him.
In addition, it seems as if coach Green has no issue with playing Chatfield against everyone and anyone as the young defender was thrown to the wolves in his first NHL game, playing mostly against Tyler Toffoli and Jesperi Kotkaniemi. These matchups allow Hughes and Schmidt to have easier times and hopefully be able to exploit weaker opponents.
As we continue to move through this season both are sure to see many more games, but in your opinion who should be playing? Let us know in the comments below.