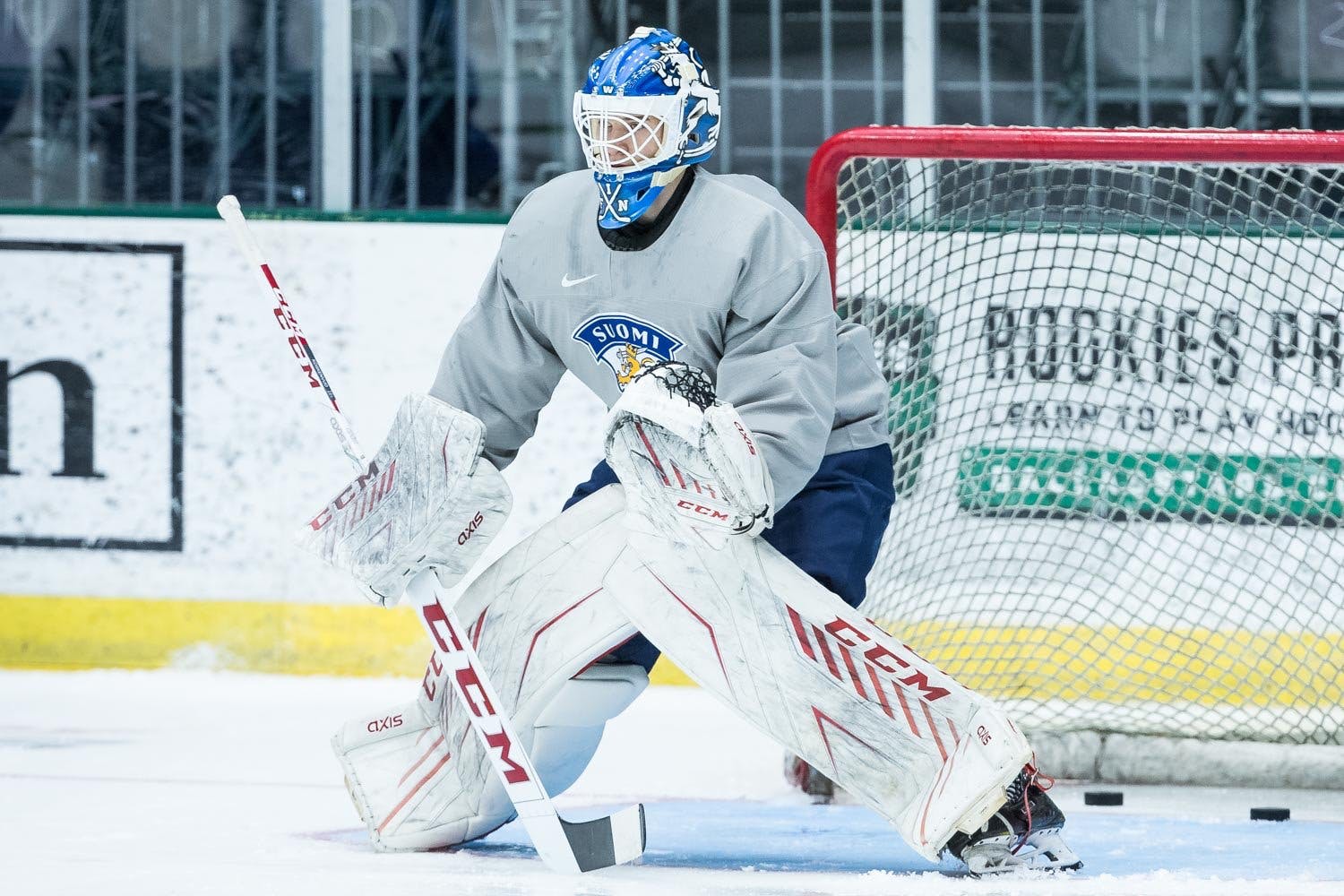 By Faber
1 month ago
Comments
Last week, we saw Elias Pettersson (D-Petey) and Jonathan Lekkerimäki named to Sweden’s World Junior roster. We thought that those two players would likely be the only two Canucks prospects that we would see play in the World Junior Championships this year.
The Canucks don’t have any Canadian or American prospects that were close to making their country’s WJC rosters. Danila Klimovich would have been an option for Belarus, but the IIHF banned their team for this year’s tournament due to the ongoing war in Ukraine.
Surprisingly, we learned early Wednesday morning that goaltender Aku Koskenvuo would be one of the three goalies to represent Finland at the World Juniors.
The 6’4″ 19-year-old puck stopper is currently playing with Harvard in his freshman year of NCAA play. Koskenvuo has played in two NCAA games this season and has a 3.56 goals against average and an .875% save percentage.

Aku Koskenvuo was named to Finland's World Junior roster, making it seven straight years that a Harvard player will compete at #WorldJuniors

Those numbers in the NCAA aren’t great but they are not the reasoning behind Finland choosing Koskenvuo to be on their roster.
Koskenvuo has shined bright like a lanky diamond during his international play with Finland, and that’s why he made the WJC team. Koskenvuo’s last strong performance came against Sweden at the 5-nations tournament, where he stopped 25 of 26 shots faced in a battle with Pettersson and Lekkerimäki’s Sweden U20 team.
Advertisement
Ad
Advertisement
Ad

He is so big and moves so well.

Koskenvuo looks like he may be trending toward being the second or third goalie on Finland’s depth chart at this tournament. Niklas Kokko is a 2022 second-round pick of the Seattle Kraken — so, he’s got a high pedigree. On the other hand, Jani Lampinen, who has gone undrafted, has posted great numbers during his international play with Finland over the past year.
We reached out to a Finnish source to ask about the goaltending situation, and here’s what he had to say.
“It’s impossible to say who the starter will be right now,” the source said. “This is a rare trio in a way as it’s quite unclear to everyone aside from the coaching staff who the true starter will be.”
We may not end up seeing Koskenvuo get any games in at this tournament as the goaltending depth in Finland is very strong. No matter the case, it’s a good experience for Koskenvuo, who will struggle to see starts during his freshman season with Harvard.
Advertisement
Ad
Advertisement
Ad
If we see Koskenvuo get into a game, that should be looked at as a win for Canucks fans. If he gets on a heater and becomes a trusted goalie for Finland in this tournament, start buying Koskenvuo jerseys ASAP.
The World Junior Championships get going on Monday, December 26th with Finland playing Switzerland at 8:00 am Pacific time and Sweden playing Austria at 10:30 am PT.