Advertisement
Ad
Despite a so-so start, five core Canucks are on pace for career seasons 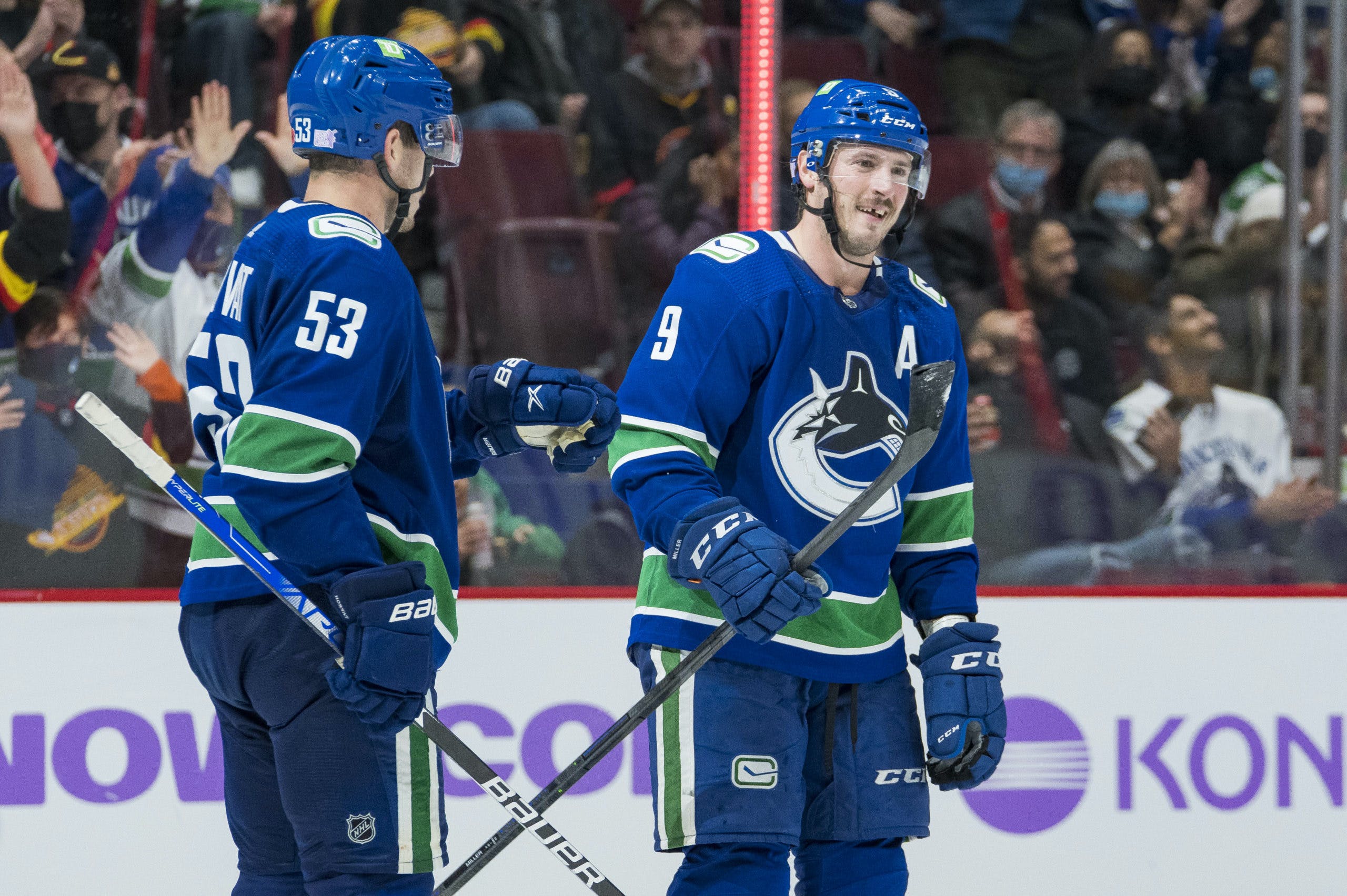 A dozen games into the 2021/22 season, and the Vancouver Canucks could probably be performing better, as a whole. Even after Sunday night’s six-goal outburst, the Canucks’ offence languished in a tie for tenth-worst in the league at 2.7 goals-per-game. Their defence, also at 2.7 goals-against-per-game, sits at ninth-best.

But while the team is struggling statistically, the same can’t be said of all its individual members. In fact, at the Game 12 mark — approximately a month and 1/6th into the season — five key Canucks are on pace to post career years in 2021/22.

That’s a positive development, and especially so if the rest of the roster can start to close the numerical gap as the season progresses.

Miller isn’t just pacing to shatter his own previous career highs, he’s well on his way to a top-ten finish in NHL scoring. Right now, his 14 points have him in a tie for seventh place league-wide, and most would attest that Miller has been playing well below his own maximum potential. He’s both producing at the highest rate of his career and looking like he has more to give, which is a scary prospect for everyone else in the league.

Is a final tally in the range of 90-100 points truly feasible for Miller? Only time will tell on that front, but it’s no longer outside the realm of possibility, and that’s remarkable. If that happens, Miller reinforces himself as an indispensable component of the core.

Prior to coming to Vancouver, Garland had never played a full NHL season, and had a sum total of 164 career games – basically, two full 82-game schedules worth. And while his production steadily increased across three partial campaigns for the Coyotes, it pales in comparison to the numbers he’s been able to put up for the Canucks thus far.

The interesting thing here is that Garland really doesn’t look like the sort of player who is going to experience notable slumps. His motor is running 100% of the time, and he just doesn’t quit pursuing the puck when he’s on the ice. Surrounded by a lot more talent than he was in the desert, Garland should be able to maintain something approaching this pace all season long if his effort remains consistent — and let’s be honest, his effort is going to remain consistent.

When Jason Dickinson was acquired with an eye to becoming the team’s dedicated shutdown center, some speculated that Horvat would experience an offensive renaissance, no longer shackled by extreme defensive responsibilities. A month in, Dickinson is still adapting to the new team, and Horvat is still taking on more than his fair share of tough matchups — but the offensive renaissance is happening all the same.

With five goals through 12 games, Horvat is on pace to be one of the NHL’s most consistent goal-scorers once again, outstripping even his 2021 rate that briefly had him in the league lead. His overall point production is also up significantly. Best of all? This really doesn’t seem anomalous, but just another step forward in Horvat’s incredibly steady progress as a hockey player.

Prior to the season, we predicted that Hughes would take a good run at breaking the Canucks’ single-season franchise record for blueline scoring. A month in, he’s already a sixth of the way there and on pace to shatter it.

Increasing his scoring rate as a third-year NHLer was to be expected for Hughes. He already cracked the top-ten in blueline scoring last season, so climbing further up the list isn’t much of a surprise, either. Honestly, him NOT breaking the record would have been considered a disappointment.

The real notable development is Hughes doing all this AND vastly improving his defensive game, to the point that he’s also +6 on the season and starting shifts in his own zone with a minute left and the game on the line.

Demko has been supplying the Canucks with starter-quality goaltending ever since the 2020 playoff bubble, and his play has slowly but surely trended upward as he goes. Despite the current Canucks being one of the worst defensive teams in the league, Demko’s numbers are better than they’ve ever been. His GAA is down nearly a third of a goal from his career standard, his save percentage is approaching that traditionally stellar benchmark of .920, and his goals-saved-above-average and other such analytical measures are truly through the roof.

Whether he gets Vezina attention or not — and he may not because of those aforementioned defensive struggles — Demko has clearly taken his game to yet another level. On a stronger team, one has to imagine that his statline would be even more remarkable. Or, if you really want to shudder, think of what the team’s statline would look like without Demko.

Of course, nothing is ever quite as good (or as bad) as it might seem.

We’d be remiss if we didn’t mention the possibility — perhaps even the inevitability — of one or more of these five players seeing their statistical pace slow down as the season winds on.

Elias Pettersson and Brock Boeser, two core players not mentioned above, are still a few points back of their career-average scoring pace. Others are…a little further behind than that. Of the 23 skaters who have suited up for the Canucks thus far in 2021/22, 11 have been held to two points or fewer.

But don’t let that take away too much from the main thrust of this article, which is that a large portion of the Canucks’ core is currently producing like they’ve never produced before. If the rest of the roster can start making up some ground on the stars, the picture will suddenly start looking a lot rosier in Vancouver.

And if they can’t, well, at least we’ve got some nice individual storylines to follow.