Advertisement
Ad
CanucksArmy post game: The Sprite isn’t right as Canucks give away a third period lead and lose to Jets in overtime 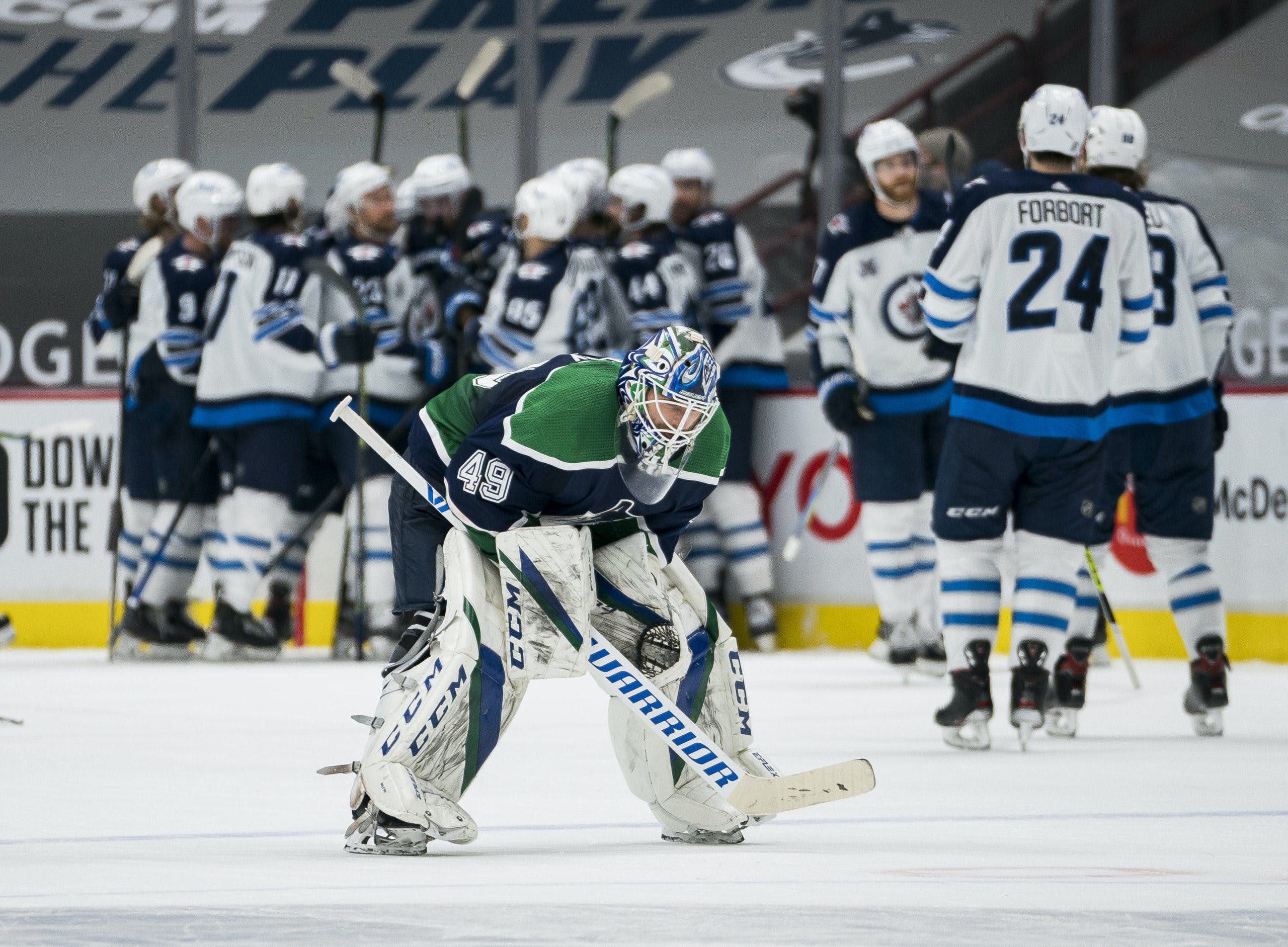 Photo credit: © Bob Frid-USA TODAY Sports
By Faber
1 year ago
Comments
After a tough game on Friday night, the Vancouver Canucks were looking to shake the Sunday scaries and show up against the Winnipeg Jets for night two of Reverse Retro week.
The Canucks started strong but ultimately fell 4-3 in overtime on the back of a two-goal performance from Pierre-Luc Dubois.
After putting up a big fat zero on the board two nights ago, the Canucks needed to generate more high danger scoring chances in the second tilt of a two-game set against the Jets. The Canucks defended well on Friday night but were unable to get any amount of ongoing pressure to crack Jets backup goaltender Laurent Brossoit. Sunday night they were tasked with a much more difficult situation as they faced one of the league’s best goaltenders in Connor Hellebuyck.
Advertisement
Ad
Advertisement
Ad
The Canucks went with Braden Holtby between the pipes after Thatcher Demko patrolled the crease on Friday night.
Loui Eriksson out, Zack MacEwen in.

The changes to the lineup brought MacEwen and Jake Virtanen together for some fourth-line duties as they flanked Jay Beagle. That line needs to bring energy every shift and you know you are going to get it from MacEwen every time he touches the ice. Here’s to hoping that it jump starts Virtanen to be more physical and engaged in the game.
The Canucks were back in the Sprite jerseys and it is time for puck drop.
You know what I say…
Let’s go!

When speaking to the media, the Canucks were pretty casual about talking about the incident between Nils Hoglander and Jets defenceman Derek Fortnite. That wasn’t the case on the ice as within seconds of Zack MacEwen and Darrell Forkbutt being on the ice together, they dropped the gloves.
Advertisement
Ad
Advertisement
Ad

Nils Hoglander is amused by the fighting pic.twitter.com/fsEcC0Fxzt

This fight gave the team momentum as Brandon Sutter pounced on a loose puck in the crease and gave the Canucks an early lead in the game when he ripped it into the yawning cage. Jordie Benn drew the only assist on the goal and the Canucks had an early lead. 1-0 Canucks.

Shot from the point takes a friendly bounce off the boards and right back to Sutter at the side of the net who makes no mistake to give the #Canucks the early lead pic.twitter.com/YnzyQtVy1c

With 10:50 remaining, Bo Horvat flew down the wing after a Jets defenceman’s stick exploded at the point. Horvat went to the net hard and drew a penalty on Forbort as he went to the net. The Canucks started with the second unit and they were able to get a few shots towards Hellebuyck from Hoglander. The first unit got a couple of shots on net but was unable to generate any real scoring chances.
Advertisement
Ad
Advertisement
Ad
The Canucks were really bringing it in the first period. This was the type of game they played against the Jets to begin their six-game road trip. The best part was that they got a goal. This team has been playing some pretty good hockey over the past week and has not been rewarded for it. Sutter’s early goal likely relaxed the group and let them grip the stick the right way instead of squeezing the paint off of it.
The Horvat line looked excellent in the period. They were controlling possession in the offensive zone and were able to get plenty of scoring chances.
Elias Pettersson got himself on the scoresheet with 4:20 remaining when he was planted in the crease and blindly fired the puck through his own legs and past Hellebuyck. 2-0 Canucks.
Advertisement
Ad
Advertisement
Ad

Shot from Boeser hits Pettersson in front of the net and he goes through his legs backhand to score! #Canucks pic.twitter.com/hsRMaAbAxw

It was one of the best first periods of the season for the Canucks. They outshot the Jets 17-9 and controlled 61.1% of the scoring chances in the period.
This was the exact response that fans needed to see after a lacklustre performance on Friday night. Let’s see how they looked in the second 20-minute frame.

The middle frame began with a lot of the same as the Canucks controlled the puck in the offensive zone for the first few minutes. The top lines were getting the puck to the net and it was resulting in Hellebuyck looking uncomfortable during many of the opening sequences of play.
Advertisement
Ad
Advertisement
Ad
The Lotto Line was creating scoring chances and the interesting thing was that they were doing a lot of it without Quinn Hughes on the ice with them. It seems like Alex Edler and Nate Schmidt were the pairing to compliment The Lotto Line while Hughes and Jordie Benn were out on the ice with the Horvat line for a majority of their ice time.
The Jets began to claw back as the period went on. They started firing more shots at Holtby and with 5:23 remaining in the period, Pierre-Luc Dubois found space in front of the net and buried his first goal as a Jet. 2-1 Canucks after the Dubois goal.
The period ended the way it started as the Jets were beginning to pour on the pressure late in the period and had a couple of very dangerous scoring chances late. There was a bomb of a slapshot from the slot that missed the net just seconds after the PLD goal and the Canucks needed to reel it in before the Jets tied things up in this period.
Advertisement
Ad
Advertisement
Ad
Shots were 9-7 in favour of the Jets in the second period. The Canucks had more scoring chances, with the count being 11-9.
We were off to the third period with the Canucks leading by one goal. The Canucks were 6-0-0 when taking a lead into the third period this season, so let’s see what Sunday’s finale did to the undefeated record.
We’re off to the third!

Hoglander began the period by creating a scoring chance and then taking a hooking penalty to send the Jets on their first power play opportunity of the game. This was a crucial penalty kill for the Canucks in a one-goal game.
The Jets got set up pretty easily and moved the puck around nicely to generate some shots on Holtby. Sutter looked good while shorthanded as he was able to get his stick in passing lanes and generated a couple of clears of the zone. The Canucks killed off the penalty and immediately after the penalty expired, Hoglander came out of the box and had a scoring chance of his own as he came in tight on the right side of Hellebuyck and almost got it over his shoulder.
Advertisement
Ad
Advertisement
Ad
There was a long possession in the offensive zone for the Lotto Line after an icing had tired bodies for the Jets. After the pressure, Mark Scheifele came down the right-wing and snuck one through Holtby. It trickled just past the goal line and just like that, we were back to even stevens. 2-2 after the Jets goal.
The following shift saw the fourth line come out and force enough sustained pressure to draw a penalty on the Jets and with 12:44 remaining in the third period, the Canucks got a huge opportunity to break the tie in the third period.
There were a lot of shot attempts from Hughes and J.T. Miller, but nothing really close to a goal. Right as the penalty expired, Sutter took a high-sticking penalty and it was time for the Jets to get their power play opportunity to break the tie.
Advertisement
Ad
Advertisement
Ad
They seized the opportunity as Neal Pionk found space for a one-timer and he ripped it right through Holtby to give the Jets their first lead of the night. 3-2 Jets.
Holtby made a huge blocker save at one end of the ice and the Canucks went down the other way and drew a penalty on a scoring chance to give them another power play, this time with 7:13 remaining in the period.
With 5:07 remaining, the refs missed a call when Brock Boeser was hooked and then gave the Canucks a very soft slashing call to give the Jets a power play. The Canucks killed off the penalty and then were set with just over three minutes to claw their way back to tie things up.
The Canucks got a gift late in the period when Josh Morrissey took a delay of game penalty with 2:13 remaining.
Advertisement
Ad
Advertisement
Ad
This was their final shot.
It had to be Pettersson.
And it was.
Elias Pettersson scored his second goal of the game on an absolute rocket from the right side and with 37.7 seconds remaining in the period, we had a tie game. 3-3 after the Pettersson goal.

Travis Green elected to call a timeout after the goal so that he could send out the Horvat line after a brief catch of the breath. We were off to overtime.

Not even 30 seconds into the extra frame, Dubois scored his second of the game when he came down the left side on Holtby and got it through him with Boeser draped all over him.
Game over.

Nils Hoglander is amused by the fighting pic.twitter.com/fsEcC0Fxzt

If you aren’t already in love with Nils Hoglander, this clip should do it. The Big Fella, Zack MacEwen steps in to fight the player who went after him on Friday night and Hoglander looked like me at a Las Vegas buffet. MacEwen kicked the crap out of Forbort and left a gushy line on his left cheek for the next few days.

When that mouthy little kid in 9th grade has a big brother in 12th grade. #Canucks pic.twitter.com/mL0Da7o3II

Looks like MacEwen has found a new profile pic.

This picture opens up so many meme possibilities.

Elias Pettersson: There were two highlight-reel goals from Petey in that game. He scored a goal with his back to the net as he slid the puck through his legs and in the post game, said he was “happy to get one and tie the game” when asked about finally getting a one-timer goal on the power play after so many posts and crossbars.
Zack MacEwen: The Big Fella stood up for his 20-year-old teammate early and had a Corsi for percentage over 80% in his very limited ice time.

The Canucks let this one slip right out of their hands. The feel is that playoff chances are slipping away with it. The Canucks have now set themselves up to where they need to win at least two-thirds of their games just to get basically a 50/50 chance of making the playoffs.
Advertisement
Ad
Advertisement
Ad
This team is sinking once again and playoffs are now another step out of reach for this group after watching their lead disappear in the third period.