Advertisement
Ad
CanucksArmy post game: The Rath-Up/Bone-Down of a 4-1 loss to the Oilers 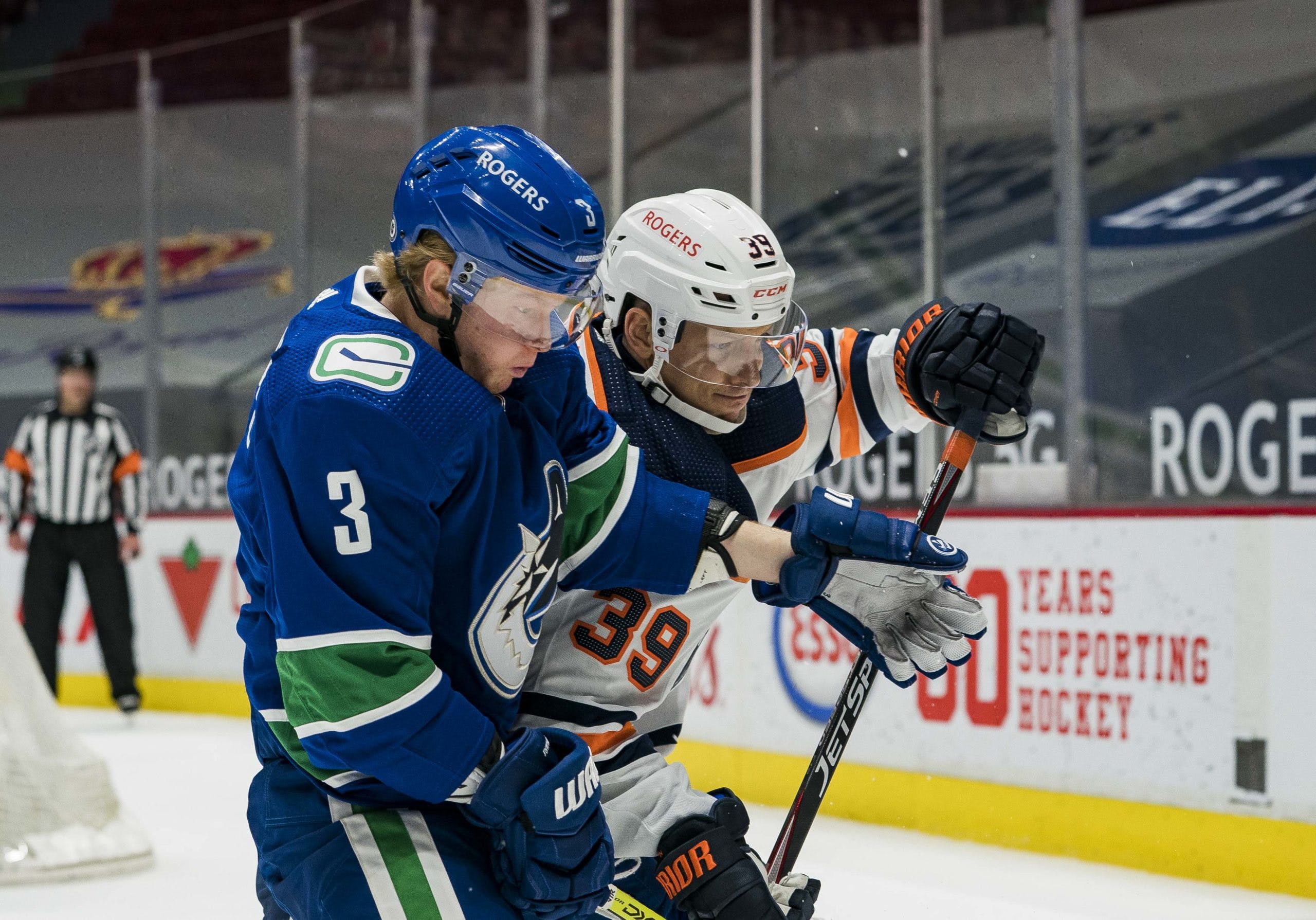 Photo credit: © Bob Frid-USA TODAY Sports
By Faber
1 year ago
Comments
The Vancouver Canucks were right back in action after a tough game on Monday that saw the Canucks make a late push but ultimately fall to Connor McDavid and his Edmonton Oilers.
On the second of the back-to-back, they again fell to the Oilers, this time by a score of 4-1.
The Canucks were going to give another player his first look at the NHL level on Tuesday night. Jack Rathbone slotted into the NHL lineup for the first time in his life on a pairing with Tyler Myers.
Rathbone is an elite skater who tore up the AHL this season and is more than deserving of an NHL game to see how he looks on the ice with NHL teammates and competition. He is an offensive defenceman with a strong shot and great breakout passes.
We will follow him closely as the game progresses.
Thatcher Demko was back in the crease for the Canucks while the Oilers sent Mike Smith between the pipes at the other end.
Advertisement
Ad
Advertisement
Ad
Two hours before puck drop, the Canucks announced that their AHL affiliate will be moving from Utica to Abbotsford for the beginning of the 2021-22 season. This is obviously great news for Canucks fans in the Abby area and we will have plenty more on that move here at CanucksArmy.
Tonight, we have a game to talk about!
Let’s see how the lines shook down for the Canucks.

Lines for the #Canucks vs. #LetsGoOilers

Rathbone is in, Juolevi is out, and it’s time for puck drop from Rogers Arena.
It’s time, let’s go!

The Canucks came to play and got on the board just 34 seconds into the game when Nils Höglander fought off a defender to create a two-on-one and passed the puck across to Brock Boeser who deflected the puck into the back of the net for his 19th goal of the season. 1-0 Canucks.
Advertisement
Ad
Advertisement
Ad

When you see an opportunity to go up 1-0 in the first minute, you take it. ✅

Check out Boeser's 19th goal of the season (and career point 200!) ⤵️ pic.twitter.com/zLMxQP2k9q

After a few minutes of shaky play, the Canucks began to sustain pressure in the offensive zone with some good shifts from their top six lines.
Jack Rathbone got a couple of shots off but didn’t hit the net with either of his early attempts.
Seeing Kole Lind and Rathbone on the ice together makes these last bunch of games a bit better to watch as they have their potential to be some support pieces for this core in the future.
Both teams were looking like they played the night before and weren’t able to put together too many scoring chances through the middle part of the period.
There was a seven-minute stretch of continuous play and with it, the first period was gliding by with the best scoring chance being capitalized on by the Canucks in the first minute of play.
Advertisement
Ad
Advertisement
Ad
The Canucks took their one-goal lead into the intermission after a quick period.
Shots were 7-6 for the Oilers as they held a small lead on the bottom of the scoreboard.
Quinn Hughes led the way with just under seven minutes of ice time.

It was a quiet start to the period but one positive was that Rathbone was beginning to look more comfortable after a so-so first period. He was thrown right into the fire as Leon Draisaitl and Connor McDavid came down on a two-on-one against Rathbone but he sprawled and took away the pass to limit a scoring chance on two of the best players in the world.
It was a choppy second period with both teams struggling to put together much pressure in the offensive zone.
Demko was looking good through the first half of the game. He stopped the first 15 shots that he faced and was locked in on the shooters while making some acrobatic saves throughout the first half of the game.
Advertisement
Ad
Advertisement
Ad
J.T. Miller tried to reverse a pass in his own zone and ended up giving the puck away to McDavid, who found Draisaitl in front of the net for a quick shot that beat Demko. 1-1 after the Draisaitl goal.
The Canucks drew the first penalty of the game but immediately took a penalty of their own almost as soon as the power play began. With just over three minutes left, we were gifted some four-on-four action.
The gift of four-on-four was taken away quickly as the Canucks took a penalty and sent the Oilers to a rare four-on-three man advantage.
McDavid and Draisaitl went to work as they so often do and scored another quick goal. Draisaitl got the goal and McDavid got the assist on his drive to 100. 2-1 Oilers after Draisaitl’s second goal of the game.
Advertisement
Ad
Advertisement
Ad
The Canucks almost made it out of the period with a one-goal deficit but Evan Bouchard was able to walk in, fake a slap shot, walk in some more, and then fire a wrist shot past Demko. 3-1 Oilers.
In a span of six minutes, the Oilers turned a one-goal deficit into a two-goal lead to finish the period.
#ExperienceCanucksHockey
The Oilers simply worked harder than the Canucks in the middle frame. They outshot the Canucks by a count of 14-6 in the second period.
Let’s move on.

The Canucks caught a break when Adam Larsson took a penalty for going at Tanner Pearson after a scuffle in the corner. The Canucks went to the power play early in the third period after their last power play only lasted 10 seconds.
Advertisement
Ad
Advertisement
Ad
The first unit had a couple of decent chances but were unable to get anything past Smith.
As their power play expired, the Canucks took a too many men on the ice penalty after a bad defensive change.
The Canucks were able to kill it off and went back on a power play of their own after Larsson elbowed Quinn Hughes.
It wasn’t a good looking power play, the best chances came when a mishmash of both units were on the ice together and Hughes almost found Lind’s stick on a wrist shot pass.
The run of penalties took Rathbone out of the game as he was not getting time on either special teams units.
The Canucks definitely had more push in the third period as they had more shots in the third period than the total of the two prior.
Advertisement
Ad
Advertisement
Ad
Darnell Nurse came in one-on-one with Demko after Josh Archibald made a great pass through Alex Edler. Nurse scored his 16th goal of the season when he slid the puck through Demko. 4-1 Oilers.
Rathbone had a nice rush down the left wing and made a move to get his first career shot off on Smith.
There was 2:24 remaining and the Canucks received another power play opportunity.
They weren’t able to score and that’s all she wrote.
Another loss and another step closer to this nightmare season coming to an end.
The Canucks had a good third period of possession, as they outshot the Oilers 17-6 in the third period. They just couldn’t find a goal to make things interesting and truck along through this tough month of May.

Jack Rathbone has already had to defend three odd-man rushes haha. Welcome to the #Canucks

Welcome to the big leagues! pic.twitter.com/1F2X5B6jrk

Again, welcome to the Canucks.

welcome to the nhl jack rathbone, defend against two top goal scorers in the league oh my god pic.twitter.com/9AUzE3iait

Nils Höglander: He made a great play to set up the only goal and was around the net all game long.

We’re at a tough spot in the season. Any hopes of the playoffs are gone and this team is just trying to make it to the end of the season. We all just want them to get to the end of the year and move into the 2021-22 season.
The NHL draft is just around the corner and this team is doing a good job of securing a better draft pick as the season moves along. They have lost six games in a row now but it really doesn’t matter. We all just want to get to the finish here and turn the page.
Advertisement
Ad
Advertisement
Ad
At least we are getting some fresh-faced prospects in the lineup and hearing about their NHL debut stories.
This was one of the best moments of Rathbone’s post game availability, talking about receiving a video from his younger brother Teddy, who has autism:

So, we continue the march to the end of the season but we did have a couple of good stories today with Rathbone’s debut and the news of the AHL team being moved to Abbotsford.
Overall, today was a win.
Don’t let the scoreboard fool you.