Advertisement
Ad
CanucksArmy Postgame: Playing the kids leads to a 3-1 win over the Jets 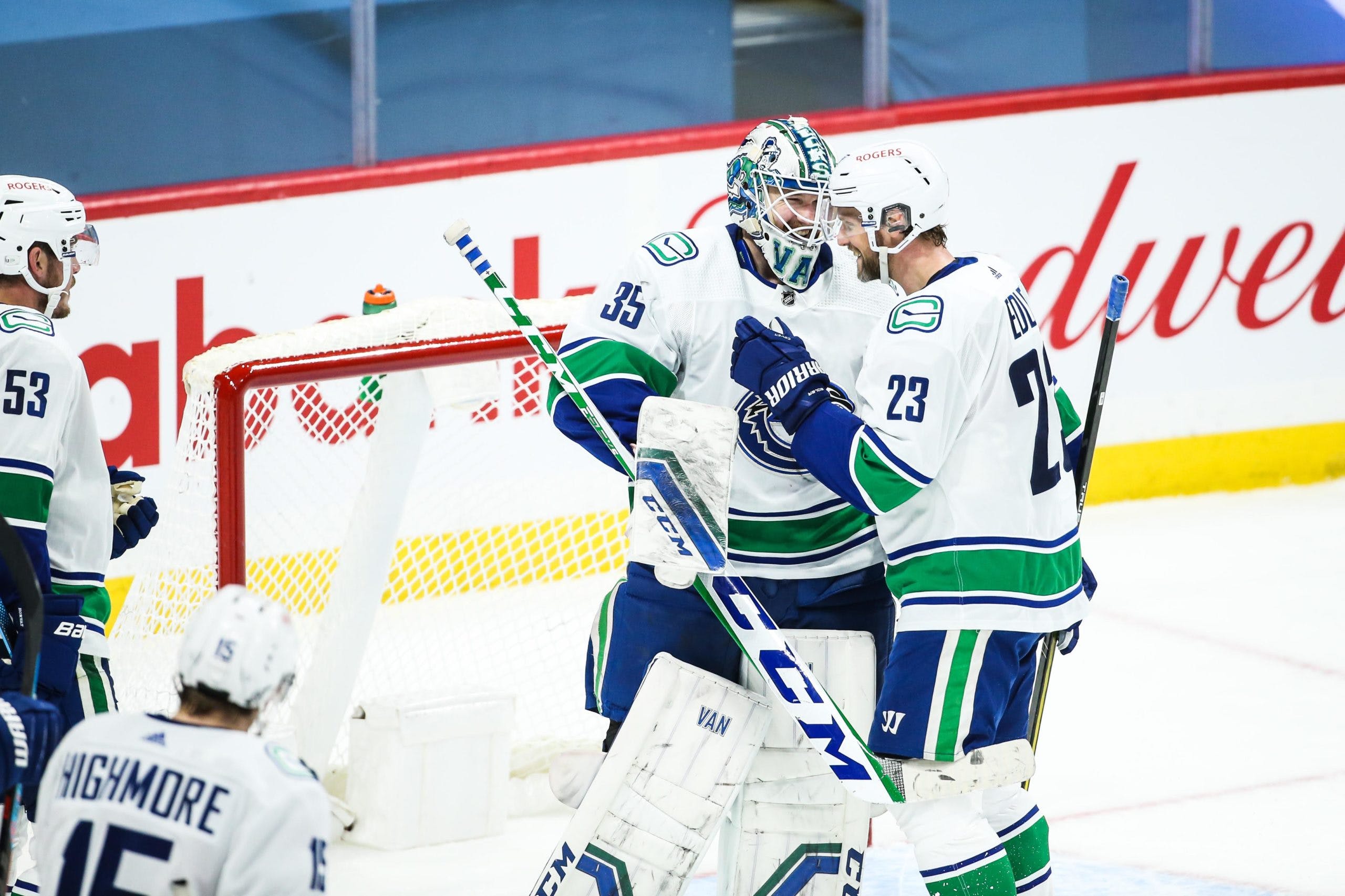 In the first of back-to-back games, the Canucks travelled to Winnipeg to face the Jets as they look to prepare for the playoffs while the Canucks aim to play the kids and see what they can bring in the future.

The kids were excellent tonight. Two goals from Nils Höglander and a 39-save performance from Thatcher Demko led the Canucks to a 3-1 win.

The Canucks want to play the kids but a notable lineup move was the insertion of Zack MacEwen at the expense of rookie Kole Lind.

MacEwen and the Jets have had an eventful season with punches being thrown by both sides.

Another notable kid is Jonah Gadjovich; “the manchild” who has joined the team and participated in a morning skate with the squad and could draw into the lineup for tomorrow’s game. As for today, not much movement either way.

Thatcher Demko got the tap on the shoulder for the start for the Canucks while the Jets went with Laurent Brossoit in their crease.

Let’s look at how the Canucks’ line shook out in the pregame.

Projected lines for the #Canucks vs. #GoJetsGo

Rathbone was set to get added ice time in this game while Matthew Highmore stays up on the Bo Horvat line.

Just three minutes into the period, Nils Höglander chipped a puck away at the point and broke in on a breakaway. He fired a wrist shot and followed up to bury the rebound on the backhand. 1-0 Canucks.

Nils Höglander steals the puck and buries his own rebound on the breakaway to open the scoring! #Canucks pic.twitter.com/iLgNpw7fcm

With his goal, Höglander is now first on the team in five-on-five scoring. He has 29 points in 50 games.

The rookie has come in and truly established himself as a top-six option for now and the future.

The Canucks were buzzing early on, as they came in for a three-on-two. The initial chance saw the puck bounce around on the side of the net for Tanner Pearson to come and make a pretty little chip pass to Horvat to bury the puck and make it 2-0 Canucks.

The Captain extends the lead burying the puck past Brossoit! #Canucks pic.twitter.com/OXCUibnrZN

After the second goal, the Canucks drew themselves their first power play of the game. Rathbone had a quick scoring chance early on as the first unit that saw Boeser-Miller-Horvat-Hughes-Rathbone mixed together looked amazing in their first minute of power play time together.

They generated four shots on goal during the power play but couldn’t sneak any by Brossoit.

The Jets killed off the penalty and took the momentum the other way as they went down the ice and scored a goal of their own. Kyle Connor found open space in front of the net and buried a quick shot over Demko’s shoulder. 2-1 Canucks after the Connor goal.

After getting back within one, the Jets received their first power play of the game with 2:30 remaining in the period. J.T. Miller took a slashing call on a back check.

The Canucks killed off the Miller penalty and that took them into the intermission with a one-goal lead.

It was a good offensive period for the Canucks and they hoped for more of the same in the second frame.

The Jets brought some pushback as the period went on. It was clear that this game was not going to be a defensive showcase, as both teams were able to attack zones easily and control possession for long lengths in the second period.

The Jets went to the power play with 10:30 remaining in the period. Tyler Graovac took a penalty in the corner for a cross-check to the back.

It was an easy kill for the Canucks but it continued to swing momentum in the Jets’ favour as they were beginning to even up the shots after the Canucks’ domination in the opening five minutes of the period.

Miller took another slashing penalty with 4:56 remaining in the period.

Demko was challenged but made a couple of huge saves throughout the period including one where he dove from left to right to rob a wide-open net. The Canucks were able to kill the penalty.

The Jets were firing a lot of shots on Demko throughout the period as the Canucks seemingly used up all their gas in the first five minutes.

Late in the period, Rathbone took a shot off his right hand and went straight to the bench but not down the tunnel. He shook it off and stayed in the game.

The Jets outshot the Canucks 14-10 in the period and pushed hard but the Canucks didn’t break against the pressure.

They took a one-goal lead into the final 20 minutes.

The first few minutes were very slow compared to the pace in the first 40 minutes. Lots of icing calls and a couple of offsides slowed the pace down early on in the third.

It took the Canucks seven and a half minutes to get their first shot on net of the period. The Jets were controlling the puck but struggling to get many high-danger chances.

Just when the Jets were pushing hard, Höglander forced the puck away from two Jets players and came in on a two-on-one with Boeser. He attempted the pass to Boeser but it went in off a Jets defender for his second goal of the game. 3-1 Canucks.

Just how Höglander drew it up! 🤷‍♂️🚨 pic.twitter.com/HQIEmRxB2O

The Canucks had a two-goal lead with eight minutes remaining and that saw the Jets pick up the pace and bring even more pressure in the offensive zone.

Demko made two saves on a Kyle Connor breakaway to keep the two-goal lead intact.

There wasn’t much action for the remainder of the game. The Jets pulled their goalie in an attempt to make it close but on the backs of Nils Höglander and Thatcher Demko, the Canucks went on to win 3-1.

It’s awesome to see Jack Rathbone making an instant impact, I had a good feeling about him since the day he was drafted. #Canucks

Not a lot of people, that’s for sure.

Who had Nils Hoglander scoring as many goals (12) as fellow rookies Alex Lafreniere and Tim Stutzle in less games?

Imagine being one of those other GM's who thought Nils Hoglander was too small. You can measure height, but you can't measure a player's heart. #Canucks

Nils Höglander: He was excellent in tonight’s game. 16:51 of ice time, six shots on net, two goals, six individual scoring chances and a 71.4% control of the shot share. He was forcing turnovers and capitalizing on the changes of possession that he created in his own zone. It may have been his best game of the season.

Thatcher Demko: He looked like pre-COVID Demko in tonight’s game. He faced 40 shots and saved 39 of them along the way. A few more of these Demko performances will be great for the crowd that just wants to watch the Canucks get as many wins as possible.

Even if they were eliminated from playoff contention in the second period due to a Montreal Canadiens overtime loss.

“He’s been great,” said Horvat of Nils Höglander. “He just keeps getting better and better. He’s improved immensely through the season.”

Tonight was about the Hög. He looked amazing on both ends of the ice and made his chances count with two goals on the night.

There is no rest for the Canucks as they will be back in action Tuesday night against the same Jets team. We could see some changes to the Canucks’ bottom-six with Gadjovich in holding and Lind also available. It’s play the kids season and these wins make for some fun games to cover after a horrible few weeks.