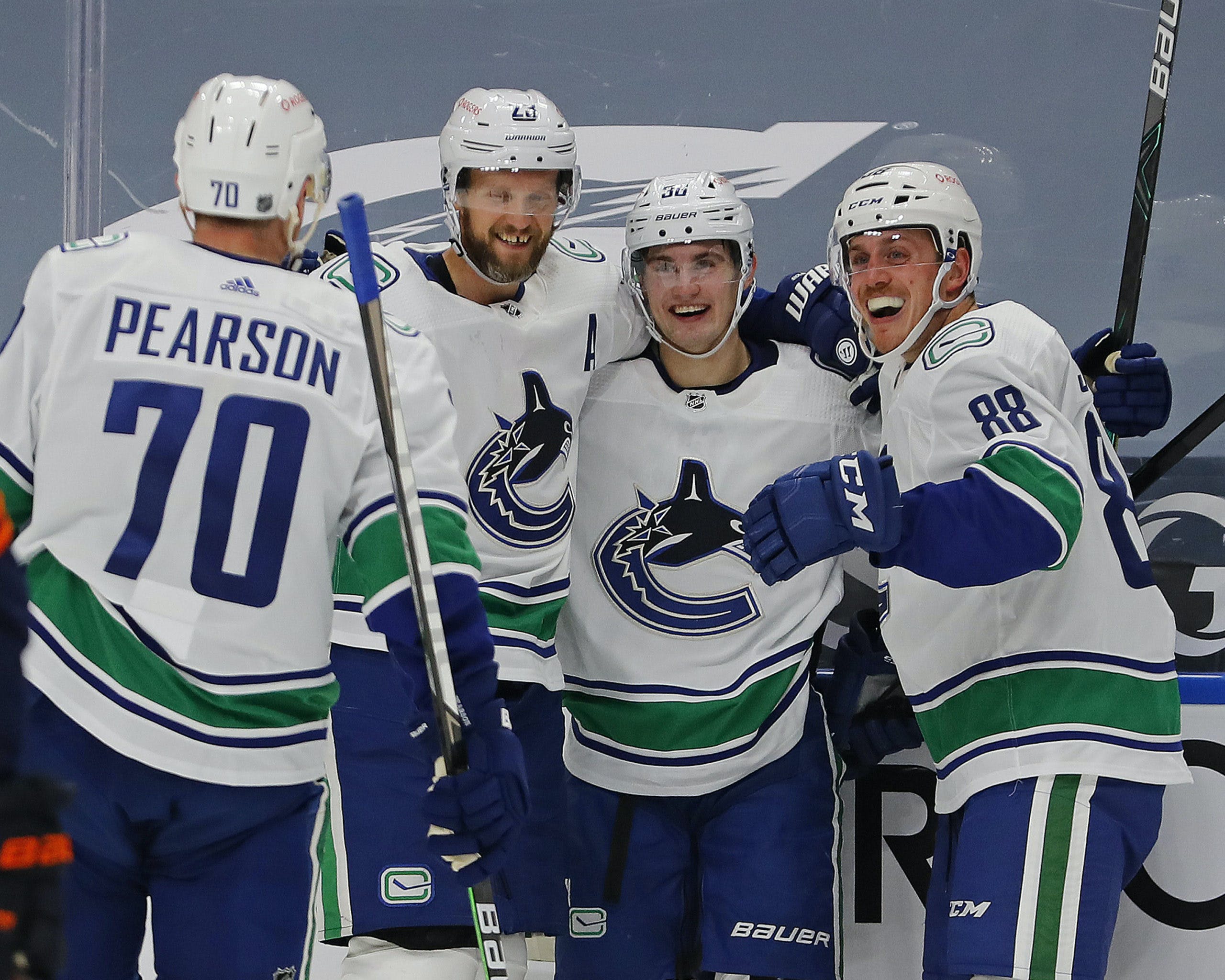 After 131 days away, the Vancouver Canucks are back and they took it to their opponents with a big 5-3 win.

They begin the adjusted 2021 regular season with back-to-back games in Edmonton against the Oilers, and made good on the first of those games.

The Canucks have had quite a few storylines over the past two weeks as training camp has run its course. On Wednesday night, the team played their first game of the season without first-line winger J.T. Miller. Miller will miss each of the first four Canucks games as he will go through COVID-19 protocols after being exposed to the virus with fellow teammate Jordie Benn. With the loss of Miller, Travis Green relied upon Jake Virtanen to hop on the wing of superstar Elias Pettersson to play on what is now the Canucks’ first scoring line.

Benn was not necessarily on the Canucks roster but his versatility as a seventh defenceman will be useful in a year that many players will likely miss games due to injuries and illness.

Projected lines for the #Canucks against the @EdmontonOilers tonight

Lots of eyes were on the young players like Nils Hoglander and Olli Juolevi, who each made their NHL regular-season debut.

Hoglander found himself on the Canucks’ top power play unit with the loss of Miller.

Juolevi was tasked with some penalty killing minutes and that meant that both players would have an impact on the special teams.

The Oilers owned the top power play group last season on the backs of Connor McDavid and Leon Draisaitl. The Oilers’ motor still runs through McDavid and Draisaitl, and if you can stop that duo, they just simply do not have enough else to beat you with.

Braden Holtby started for the Canucks while Mikko Koskinen was between the pipes for the Oilers.

It’s been a long enough wait and I think it’s time.

Nils Hoglander was in the starting lineup for the Canucks and looked right at home. Early on he was battling against bigger defencemen and was making excellent passes in the offensive zone.

He looked very calm for a rookie and with it, the Horvat line looked dangerous early on.

It’s been a while since either team had been in high-intensity hockey and it showed as it seemed like both teams were battling for who could ice the puck more in the first 10 minutes of the game.

After a bit of a scary moment when Nate Schmidt caught a deflected shot to the face, the Canucks brought their most dangerous scoring chance of the period. Hoglander was spinning around the offensive zone with the puck before Tanner Pearson set up Horvat right in the slot, but it was turned away by Koskinen.

The Canucks drew the first penalty of the game when Elias Pettersson drew a penalty with 9:21 remaining in the period.

As the power play expired, Jake Virtanen thought it was only fair to give the Oilers a shot with the man advantage.  So, he took a cross-checking penalty with 7:08 remaining.

The Canucks would kill off the penalty and we were left with five minutes of 5-on-5 time.

They didn’t waste any time as Hoglander worked a puck up to Pearson who drove the right side and then sent in Horvat for a partial breakaway. He made no mistake burning the attempt to make it 1-0 Canucks.

nils hoglander gets his first nhl point, an assist, on a bo horvat goal and the canucks are up 1-0 pic.twitter.com/fF2ZR3flfX

The first period came to an end with some added physicality. Zack MacEwen and Antoine Roussel were throwing their bodies around to continue to mount momentum for the road team in this game.

After 20 minutes, the Horvat line looked like the best trio for the Canucks. That line received plenty of matchups against the Draisaitl line while the Pettersson line struggled a bit as they matched up with the McDavid line.

Olli Juolevi was a calming presence alongside Tyler Myers. He made every play that he needed to in the first 20 minutes. He wasn’t asked to do a lot, he was just asked to be enough.

And in the first period, he was enough.

He made some good, safe passes and defended well on the rush. Juolevi is always going to be quiet, but in his first period of regular-season NHL action, he got noticed for all of the right reasons.

The Canucks outshot the Oilers 8-7 in the period. They seemed to control a majority of the possession and would need to build off a strong first 20 minutes of the season.

It was a slow start to the first few minutes of the period but the intensity and amount of scoring chances cranked right up after a couple of big hits by MacEwen and Pettersson.

The Oilers worked their way right back into the game after a Juolevi giveaway. Kailer Yamamoto made no mistake and tied this one up at 1-1.

kailer yamamoto scores the oilers first goal of their season and the game is tied 1-1 pic.twitter.com/1UR9ejvZNQ

It was a bad giveaway for Juolevi who couldn’t get much help from his partner after the turnover.

After the 1-1 goal, the Oilers kept the pressure on the Canucks as the only lines that could maintain pressure were the Jay Beagle line and the Horvat trio. The Beagle trio couldn’t get any luck halfway through the game as they were all around the net early in the second period.

Travis Hamonic took a slashing penalty when Connor McDavid drove to the net with 9:59 remaining in the period.

The Oilers would get another opportunity to take advantage of the extra man. Leon Draisaitl ran right through Juolevi as he drove to the net and clanked one off the post in the Oilers’ best chance of the game up to that point. The Canucks killed off the second power play attempt, and it was back to even strength.

The middle part of the period gave fans some exciting back and forth 5-on-5 action. Some defencemen were snapping passes and the stars of each team were showing off their skill.

Just before the period expired, the Canucks came in on an odd-man rush. Pearson drove to the net and the puck found its way to the front of the net.

Hoglander drove the crease and beat two defenders to get his blade on the stick and bury his first career NHL goal to make it 2-1 Canucks.

The Oilers received their third power play of the game with 1:52 remaining in the period. The Canucks killed off all but eight seconds of the penalty as the period expired.

The Canucks outshot the Oilers 17-13 in what was a wide-open period. The Canucks lead the control of the possession through 40 minutes and really began to turn things on as the second period came to an end.

Ten seconds into the third period, the Oilers tied the game up when Darnell Nurse fired one past Holtby. 2-2 after the Oilers goal.

darnell nurse goes bardown (?) 10 seconds into the third period and the oilers tie the game at two pic.twitter.com/QVCHllguNF

Just 103 seconds later, Adam Gaudette ripped a one-timer in the slot from an Antoine Roussel pass and made it 3-2 Canucks.

THIS IS WHY @Hockey_Gaud PLAYS WARZONE, TO SNIPE ALL DAY pic.twitter.com/bdBbELwK8R

The flood gates opened up as the Canucks would add to their lead.

Brock Boeser snuck behind the defence during a board battle and had nothing but time when he got in on Koskinen. He ripped a wrist shot past the goaltender and the Canucks led 4-2.

Hughes is able to poke the puck to Boeser behind the D and he makes no mistake giving the #Canucks a 4-2 lead! pic.twitter.com/aW86sawzMy

Holtby was tested with the pace of play ramping up. He was the calming veteran goaltender that the Canucks needed in this game.

The Oilers were getting a lot of their offence from the rush and Holtby moved well to defend against the angles and cross-ice passes that he faced through the first 45 minutes.

With 11:42 remaining, the Oilers cut the lead down to one. Adam Larsson ripped a slap shot from the point that went top corner. 4-3 Canucks after the Oilers goal.

Just when the Canucks needed them most, the first line came through. Pettersson made a remarkable bank pass to Boeser who came flying down the right wing and sniped top corner past Koskinen.

Pettersson with a disgusting bank-pass to send Boeser in for the goal. holy moly. 🔥🔥🔥🔥 #Canucks #BroccoliBoeser pic.twitter.com/XD33W4d0Hs

With 4:15 remaining in the period, the Oilers went to the power play for the fourth time after being unsuccessful in each of their three prior attempts.

Myers had an excellent penalty-killing shift that lasted 1:55. The Oilers pulled the goalie with just under three minutes to go in the period.

Then, with 1:49 remaining, Jesse Puljujarvi took a hooking penalty and gave the Canucks their second power play attempt of the game.

They would kill some time and throw Brandon Sutter and Tyler Motte some power play time as the seconds ticked away and the Canucks secured their first win of the season in a 5-3 victory.

Nils Hoglander, Tanner Pearson & Bo Horvat: The Horvat line was excellent all the way through the game for the Canucks. Each of Horvat and Pearson had two five-on-five points in Wednesday’s game with Hoglander scoring a goal of his own. The coach had some glowing words for Hoglander’s first game as well. “He was really good tonight,” said Green. “He was strong on both ends of the rink, strong on the puck, made some nice plays, I’m very happy with his game.”

“You see a guy practice and wonder he will react to regular-season games and I thought he raised his game.”

Brock Boeser: Brock Boeser had two 5-on-5 goals in the game. He looked to have gained a step and made his way down the wing with some real pace. He made the most of his four shots, burying two of them on Koskinen.

The Canucks outshot the Oilers 35-31 and on the heels of a strong goaltending performance by Braden Holtby, they were able to complete a gutty victory. The Canucks bounced back with scoring chances and/or goals every time the Oilers chipped away at the lead. The coach was happy with the group’s effort as well.

“Really happy with our game, that was a good start to the season. I like how we responded in parts of the game,” said Green.

The Canucks were the better team throughout the game and made sure to cut them down at their knees every time the Oilers began to claw back. The Canucks did a good job of limiting Draisaitl and McDavid’s offence and that showed as the Oilers simply cannot depend on their bottom six enough to win games. McDavid was held without a point despite attempting nine shots and having seven individual scoring chances.

There’s no time to waste or rest as the teams are right back in action Thursday night but this time at 6 pm.

We will have you covered through the day as well as with another CanucksArmy postgame report. See you tomorrow!