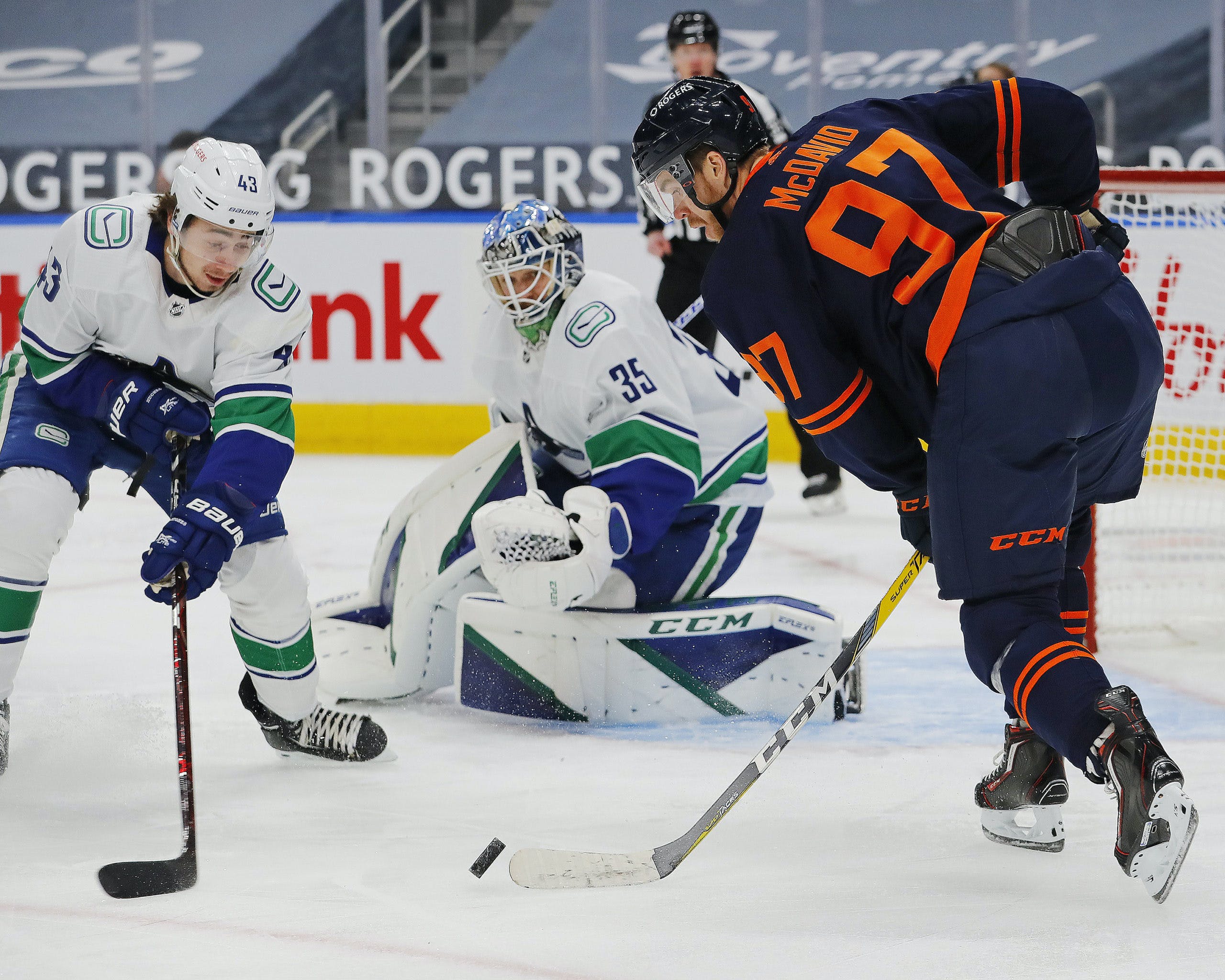 Photo credit: © Perry Nelson-USA TODAY Sports
By Faber
1 year ago
Comments
Coming off of a 5-3 victory just one night prior, the Vancouver Canucks were back in action against the Edmonton Oilers once again.
There are some games where Connor McDavid just takes over. Thursday night was one of those games as he scored a hat trick and led the Oilers to a 5-2 victory.
Despite a bad giveaway in the opener — that Travis Green thought could have resulted in an Oilers’ penalty — Olli Joulevi looked right at home in the opener. There are a lot of questions about if Juolevi can defend NHL competition, specifically on the rush. Juolevi proved that he could on Wednesday night and will try to build on that in game two of the 56 game dash to the playoffs.

All but two players with a positive 5-on-5 Corsi tonight.

Olli Juolevi leading the way with that 85.71% 👀🔥 pic.twitter.com/UiZgTRdfGy

Advertisement
Ad
Advertisement
Ad
Juolevi played 10:16 on Wednesday night, with 9:56 of it coming at even strength. Nate Schmidt was used in a penalty-killing role for the Canucks in place of Juolevi for game one. Juolevi does some of his best work on the penalty kill so this will be a story to follow as the season goes on. I can’t get the idea of throwing Schmidt and Quinn Hughes out for a massive momentum swing after killing a penalty off. If Green believes that Schmidt should be on the penalty kill instead of Juolevi, then that’s the way we will see it for the time being.
After just one game and under 10 minutes of five-on-five play, Juolevi looked to show very well in his limited role.
The defence pairings were the same from the opener and that saw Juolevi paired up with Tyler Myers once again. It was another test for Juolevi as he was tasked with defending against the streaky Oilers, whose offence runs through their two superstars, Leon Draisaitl and Connor McDavid.
Advertisement
Ad
Advertisement
Ad

The trio of Nils Hoglander, Bo Horvat, and Tanner Pearson wanted to build on their strong performance in the opener while the two big stars in Edmonton needed to be better if they wanted to secure a win for the home team.
Thatcher Demko got the call in the crease for the Canucks and Mikko Koskinen received double duty as he patrolled the blue paint for the Oilers again on Thursday night.
Two regular-season Canucks puck drops in under 24 hours. It’s a great time to be a hockey fan.
Let’s go!

Thatcher Demko robs Kassian with the glove and then denies McDavid on the rebound. #Canucks #Oilers pic.twitter.com/LJONXOAFlN

The first power play of the game came with 13:36 remaining when Tyler Motte was charged with a hooking penalty.
After sustained pressure for almost an entire two minutes, the Oilers scored the first goal of the game. Ryan Nugent-Hopkins drove the net and pounced on a loose puck to give the Oilers a 1-0 lead.
The Canucks got their own chance with the man advantage when Kailer Yamamoto slashed Elias Pettersson with 9:58 remaining.
The Oilers came to play in the first period. They were able to maintain possession in the offensive zone at five-on-five and were giving Demko quite the workout in the blue paint.
Advertisement
Ad
Advertisement
Ad
Late in the period, the Canucks went with a line of Hoglander, Pettersson, and Boeser. Jake Virtanen bounced down to the Horvat line for a shift but then Hoglander double shifted with the Horvat line.
The Canucks went back to the power play with 3:53 remaining as ex-Canuck Zack Kassian took a holding penalty.
The second unit began the power play and there were some good chances for Virtanen and Adam Gaudette before they shifted off for the first unit.
The Oilers killed off the penalty and the Canucks were unsuccessful in their first two attempts with the man advantage.
There was a faceoff with 2.5 seconds remaining in the Canucks’ zone. Connor McDavid drove the net hard and got to the puck just in time to score a buzzer-beater goal. 2-0 Oilers as the period ended.
Advertisement
Ad
Advertisement
Ad
The Canucks were outshot 17-10 in the first period even though both teams attempted 26 shots. The Oilers did a great job of blocking shots and closing out shooting lanes on the Canucks’ top players. Quinn Hughes led the Canucks in ice time with 8:40 in the first 20 minutes. Bo Horvat was the forward leader for the Canucks as he racked up 8:01 of ice time in the period.

The Canucks came out flying in the second frame and it didn’t take long for them to cut into the Oilers’ two-goal lead.
After taking some time to gather the puck, Nate Schmidt ripped a slap shot from the point that went right through Koskinen and pierced into the Oilers’ lead, making it 2-1 Oilers after the Schmidt goal.

Nate Schmidt with the blast from the point for his first goal with the #Canucks pic.twitter.com/GXUKoolqCx

Advertisement
Ad
Advertisement
Ad
Demko continued to keep the Canucks in this game as he was tested in tight multiple times due to a lack of defensive coverage.
With 12:03 remaining in the period, Motte took his second minor penalty of the game.
McDavid did what McDavid does and he came flying into the zone before cutting to the slot and ripping one past Demko. 3-1 Oilers after the McDavid power play goal.
Just a couple of minutes later, Travis Hamonic fired a shot on the ice directly to the blade of Motte and in. 3-2 Oilers after the Motte goal.

Hamonic finds Motte who directs home the shot pass and the #Canucks are back to within a goal. pic.twitter.com/Fub2rKIT6y

Motte needed to make a play after being in the box for both Oiler power play goal.
Advertisement
Ad
Advertisement
Ad
The Canucks were being outshot by a 3-2 ratio at the halfway point of the game but Demko and some timely scoring was keeping them in this game.
Jay Beagle drew a call with 8:24 remaining in the period when Darnell Nurse took a penalty for slashing.
During the power play, Hughes took a cross-checking penalty after sticking up for Boeser, who took a hit near the head from Ryan Nugent-Hopkins after firing a shot on net.
The Canucks killed off the remainder of the Hughes penalty after some four-on-four action and we were back to even strength with five minutes remaining.
Just seconds after the penalty expired, Connor McDavid scored another one as he danced in on Demko to bury another goal. 4-2 Oilers after the McDavid hat trick.
With 3:28 remaining, McDavid took a penalty as he held onto Gaudette while he drove the net on a rebound.
Advertisement
Ad
Advertisement
Ad
The Canucks were unable to score on their fourth power play attempt and then received another opportunity right after as Yamamoto took a goaltender interference penalty with 55 seconds remaining in the period.
They couldn’t mount much in the 55 seconds and passed the power play over into the third period down by two goals.
The Canucks outshot the Oilers 19-16 in the period and Hughes led the team with 9:36 of ice time in the period.

The forward lines and defensive pairings went straight into the Green blender to begin the period.
They built some momentum after opening the period on the power play and Green wanted to capture some of that by creating some very offensive five-man units.
With 13:11 remaining, Hoglander took a holding penalty to give the Oilers’ dominant power play an opportunity to bolster their lead.
Advertisement
Ad
Advertisement
Ad
The Canucks killed off the penalty and then had 10 minutes to chip away at their two-goal deficit.
Ryan Nugent-Hopkins scored his second goal of the game with 8:18 remaining in the game. He tipped a pass by Demko to make it 5-2 Oilers.
The Oilers rode their three-goal lead all the way to the finish as they secured the victory.

Nate Schmidt: Schmidt controlled a high amount of possession in the game. He scored his first goal as a Canuck in this game as well. He played 17:46 while killing penalties and playing second unit power play time.

The Oilers are going to get most of their wins on the backs of McDavid and Draisaitl. Thursday night was one of those nights.
McDavid had three goals and Nugent-Hopkins added two of his own. The Canucks were unable to contain the Oilers’ superstars in the game. Demko let in five goals on 46 shots and that was not good enough for the Canucks to get the win. Koskinen had a bounce-back game as he was good when the Oilers needed him, making 38 saves on 40 shots.
Advertisement
Ad
Advertisement
Ad
The Canucks attempted 84 shots in the game “I leaned over to Holtby and said I can’t remember seeing that many shots in a game,” said Nate Schmidt post game.
The Oilers’ players blocked 29 shots in the game and flooded the Canucks’ shooting lanes. They did a great job of covering the Canucks’ top shooters on the power play and at five-on-five.
After back-to-back games, the Canucks will now have a day off before they play the Flames in Calgary on Saturday night.