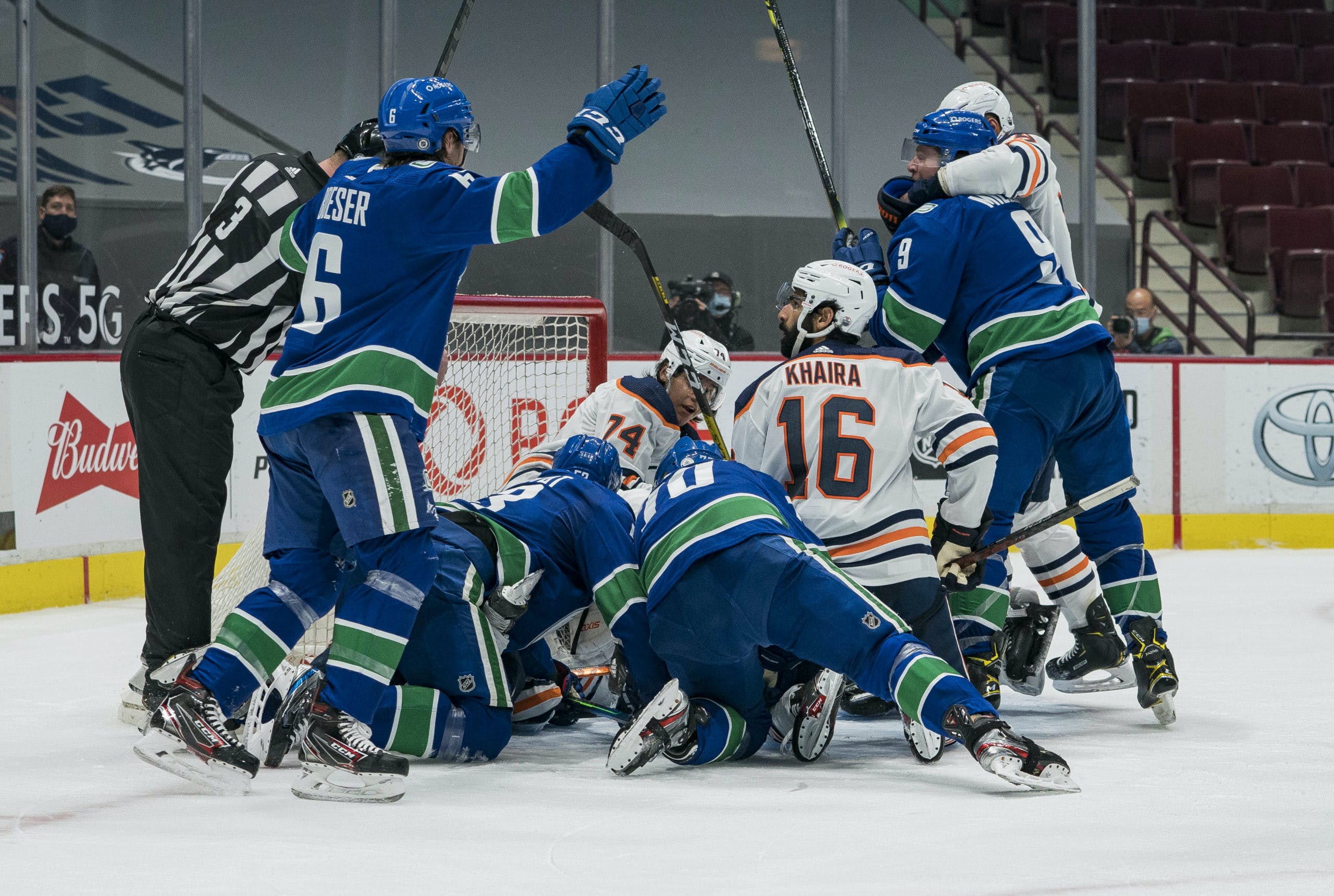 Photo credit: © Bob Frid-USA TODAY Sports
By Faber
1 year ago
Comments
After a humiliating loss on Wednesday night, the Vancouver Canucks hosted a tired Edmonton Oilers team who played in Edmonton the previous night.
On the back of their soon-to-be all-star goalie, they won 2-1 in a low-event game that featured another dynamite performance from Thatcher Demko.
Travis Green had Canucks fans questioning everything after seeing the injury bug hit two of their penalty killing bottom-six players.
Loui Eriksson and Zack MacEwen drew into the lineup while Jay Beagle and Antoine Roussel were scratches for the Canucks. Jalen Chatfield took warmup with the team but did not play in the game.
Here’s how the lines looked for the Canucks.

In net, the Canucks gave Thatcher Demko his fifth straight start and eighth in the past nine games. At the other end of the ice, the Oilers went with Mikko Koskinen between the pipes.
The Oilers are one of the hottest teams in the league. Coming into Saturday night, they had won 12 of their last 16 games. The Canucks had their hands full and were unable to ice their best lineup with players like Marc Michaelis and Jayce Hawryluk being asking to play up in the lineup.
Advertisement
Ad
Advertisement
Ad
Hockey Night in Canada always brings some added excitement, so why waste any more time on the pre-game.
It’s time for puck drop, let’s go!

The period began with some back-and-forth action in which the pressure came to a head when the Oilers put out Connor McDavid and Leon Draisaitl together on a line. The duo generated a quick scoring chance and held the puck in the Canucks’ zone for an extended period of time.
The Canucks’ lines were immediately thrown into the blender as the centres were getting a rotation with different wingers and saw Adam Gaudette get his shifts skipped on occasion early on in the game.
The trio of Nils Höglander, J.T. Miller and Brock Boeser had a couple of good shifts early on and were able to get shots to the net against Koskinen.
Advertisement
Ad
Advertisement
Ad
Even with a few chances for either team, it was a quiet first half of the period. Neither goaltender was really tested, though Demko had to make a handful of saves in the first few minutes of play.
Alex Edler laid a big hit on Kailer Yamamoto just past the halfway point of the period. He sent Yamamoto sliding into the boards as he stepped up and delivered a check in the neutral zone. The hits didn’t stop there, as Zack MacEwen threw a hit so hard that it knocked the boards out of place. The referee whistled down the play and the arena staff went to work on the repair.
The period went on and Nate Schmidt took a shot in the midsection that had him bent over on the bench for a couple of minutes. He looked to be stretching things out for a couple of minutes but was right back out for his next shift.
Advertisement
Ad
Advertisement
Ad
Edmonton continued to generate a lot of low-risk pressure against the Canucks as the duo of McDavid and Draisaitl had their way with the Canucks in the first period. The Oilers had 13 shots on net in the first period. McDavid was on the ice for 11 of them and Draisaitl was on the ice for 10 of them.
The Canucks were not controlling the pace of play as the period went on, and the first period finished with the Oilers dominating the shot count 13-4. The Oilers also had plenty more scoring chances, they had 12 scoring chances compared to the Canucks’ four.

The Canucks went to the power play just 2:06 into the period.
The unit got set up multiple times and with it, came some bombs from Miller on the right side. He ripped a shot off the post on a one-timer but that was as close as the Canucks would come to scoring on that man advantage. The Oilers killed off the penalty and immediately sent out the Draisaitl-McDavid duo.
Advertisement
Ad
Advertisement
Ad
With 11:13 remaining in the period, Höglander took a holding penalty that gave the Oilers their first power play attempt. McDavid ripped a one-timer off the post and that was as close as they came to scoring on the man-advantage.
Brandon Sutter drew a penalty and the Canucks were given another opportunity on the power play with eight minutes remaining in the period.
There was a rugby scrum around the crease that ultimately led to the puck crossing the line. Bo Horvat was given the unassisted power play goal and the Canucks led 1-0 with 7:01 remaining.

The Canucks had a much better second period and it showed on the scoreboard with them clinging to a 1-0 lead as the end of the period approached. J.T. Miller lost his stick and ended up taking an interference penalty with 5:17 remaining. The Canucks just broke the scoreless tie and needed to work through yet another Oilers power play in the period.
Advertisement
Ad
Advertisement
Ad
It was looking to be a solid kill for the Canucks until Edler took a cross-checking penalty to give the Oilers a 5-on-3 for 23 seconds. The Canucks got through the two-man advantage but were unable to kill off the remainder of the second penalty. Draisaitl wired a one-timer from the right side and tied the game up 1-1.
The period came to an end with a big Demko save and some five-on-five action throughout the final few minutes. Each team had 10 shots in the period and the Canucks led with 11 scoring chances compared to the Oilers’ nine.

The Canucks came out with some energy and brought shots on net early in the period. It was a quiet first 10 minutes as both teams had some shots on net but found it very difficult to maintain possession in the offensive zone.
Advertisement
Ad
Advertisement
Ad
It was at 10:37 when the tie was broken. The Canucks were able to maintain some possession time in the offensive zone and Tyler Myers found some space to walk in and blast a slap shot over the shoulder of Koskinen. 2-1 Canucks.

Tyler Myers leans into a slapshot from the top of the circle to give the #Canucks a 2-1 lead! pic.twitter.com/diUJ6cQfAr

It was a milestone goal as it was Jordie Benn’s 100th career assist and Myers’ 300th career point.
The seconds ticked away with the Canucks holding onto their one-goal lead. They opened the door for an Oilers comeback when Tanner Pearson took a penalty with 2:30 remaining in the period.
With 1:46 remaining, the Oilers pulled their goalie and called a timeout to devise a plan of attack on the Canucks and Thatcher Demko.
Demko looked locked in once again right down to the final horn. With 106 seconds left in the game, he had given up one goal on 32 shots and was once again the Canucks’ best player on the ice.
Advertisement
Ad
Advertisement
Ad
Edler had a goal-saving block with 20 seconds remaining:

The Oilers were set to give their final push, an offensive zone faceoff with 18 seconds remaining.
Pearson had a big block soon after and the Canucks won a tight one by a final score of 2-1.

Alex Edler trained his entire life for that moment

Thatcher Demko: It’s ridiculous how good Demko is playing lately. He is once again the top performer in this game. He made 34 saves on 35 shots and came through in the clutch once again.
Tanner Pearson: Aside from his late penalty, Pearson was excellent at creating offence in this game. He had 10 shot attempts, eight individual scoring chances and six shots on net.

It wasn’t a very exciting game, but it was another step in the right direction for the Canucks. They were able to limit a prolific offence to only one goal. A lot of that is on the back of Thatcher Demko, who is making fans forget about what Jacob Markstrom did last season and looking forward to watching Demko be the starting goalie of the here and now.
Advertisement
Ad
Advertisement
Ad
It was a quiet game through and through but they got the win. Good for the Canucks.